Posted by:
Tags:  Nandor night life vampire hunter vampires What We Do in the Shadows

Guillermo gets fed up, Laszlo and Nandor hook up, and the gang fails to live deliciously in episodes 8 and 9 of “What We Do in the Shadows” Season 2.

Look, we’ve made it pretty far into this show knowing that Nandor was kind of stringing Guillermo along. It doesn’t seem that he has any genuine intention of turning Guillermo into a vampire, despite the promise he made to him. In fairness, once you’ve been living for hundreds of years, ten years might seem like the blink of an eye to you. But to Guillermo, it’s been an eternity of waiting.

Throughout the course of the second season, we’ve been able to watch Guillermo grow into his own and become more confident, becoming an impressive killing machine, but all the while continuing to dote tirelessly on his master. However, the Guillermo we know was shaken to his core in this episode.

The episode starts out with Nandor’s old familiar coming to town, and it seems like Nandor might be a little less lovable than we’ve been led to believe. His familiar, now an old man, apparently had his mind wiped by Nandor after years of trying to convince his master to turn him into a vampire. Unfortunately for Nandor, thanks to a brain game app, his memory has been jogged. And he’s back to claim his right to be a member of the undead.

Finally, it all falls into place for Guillermo. He realizes Nandor is never going to turn him. Instead, Nandor is simply going to wipe Guillermo’s memory when has tired of him, and he too will be abandoned in a parking lot in Delaware. 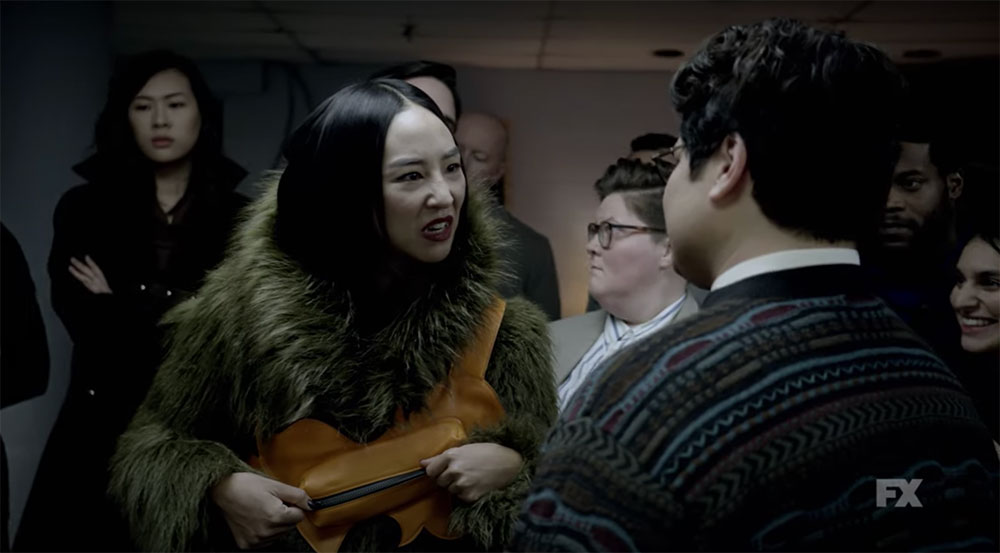 Guillermo takes the old familiar,  Benjie, to a meeting group of other familiars. There he runs into an old acquaintance,  a familiar who has recently been turned into a vampire by her master. She’s way more of a modern thinker than Nandor, and she treats her familiars with respect, vowing to turn them all in a short amount of time. She offers Guillermo a job if he willingly leaves Nandor’s employment.

When Guillermo tells Nandor he’s been offered a better opportunity, Nandor acts like Guillermo’s departure doesn’t bother him in the slightest, and a heartbroken Guillermo heads for greener pastures.

The truth is, however, Nandor misses Guillermo terribly. He even shows up to the home of Guillermo’s new employer to check in on him, and he urges the new vampire in his life (she’s adamant NOT to be called “master”) to treat Guillermo well. 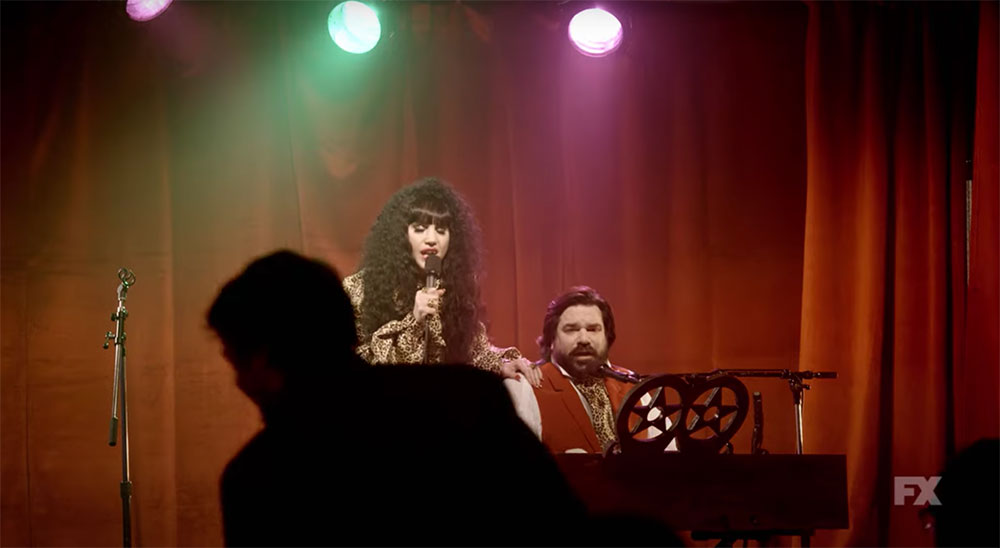 Then, as Nadja and Laszlo are busy trying to revive their old music career, egged on by Colin Robinson, all hell breaks loose.

Turns out, the familiar wasn’t actually turned into a vampire after all. It was all just a ploy to get humans for her master — and to appear cool. Her master, a vampire who looks like a small girl that terrorizes pedophiles, returns and murders the guests. Guillermo narrowly escapes while saving the cat, only to be tracked down by Nandor. Guillermo thinks that Nandor has come to kill him, but really he has come to beg for him back. Guillermo uses the opportunity to bargain for more rights, and the two fly off into the night.

Who knows when Guillermo will get turned into a vampire. But after this episode, we all know that Nandor truly does love his little Gizmo.

Hey, there’s a goat over here!

Witches come to disrupt the house meeting this week, when a goat, Black Peter, appears in the backyard, summoning Laszlo into a purple flame. Nandor doesn’t believe that it could be witches, convinced that Nadja has some kind of unfounded hatred of them, until he too gets sucked into the purple cyclone.

Nadja, Guillermo, and Colin Robinson follow the flying harpies to their shop, where the fellas are strung up in the back. The gang of rescuers is transported into a room full of doors, each one leading to a different horror. There is a truly terrifying moment where one of the doors opens to a back-bending old woman that contorts and crawls like a demon from a horror movie before they slam it shut.

Of course, Guillermo manages to save the day by finding the door marked “Salida”, Spanish for “Exit”. 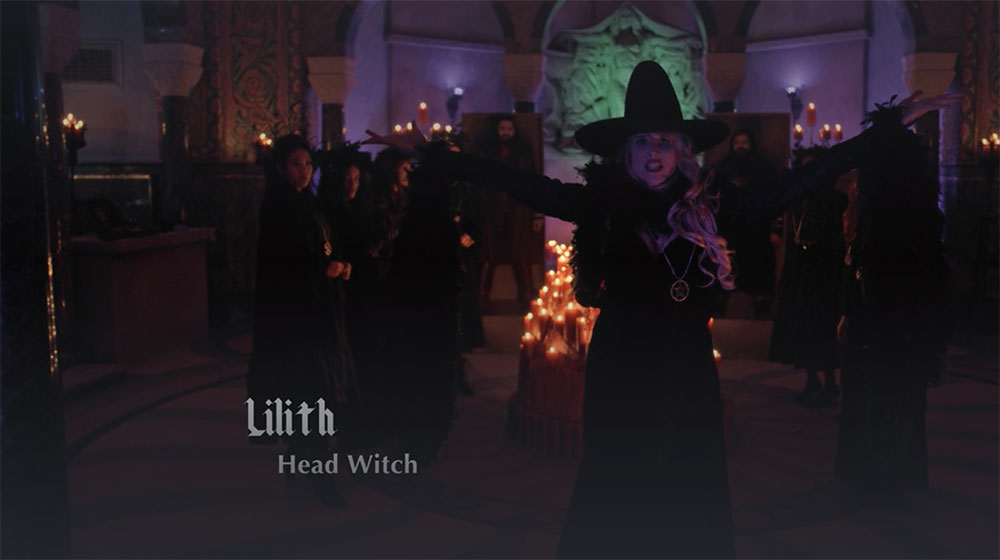 So what dastardly plan do the witches have in store? Well, they’re trying to extract some vampire semen, of course! Lucy Punch provides a stellar guest appearance as the leader of the witches, who turn out to be a horde of MILFs. Laszlo and Nandor are game for semen abstraction, until the medieval tools come out.

When Nadja discovers who the main witch is, we finally find out why she hates witches so much. Lilith was once her best friend, who betrayed her by having an affair with Laszlo. But Lilith only did this to obtain some semen for an anti-aging ritual, and even disguised herself as Nadja while doing so. Or…she kind of did.

In truth, she really just disguised herself as a generic European woman with long dark hair. Nadja calls Laszlo out on this, wondering how he could mistake this other woman for her. When Laszlo insists he can’t tell the difference, Nadja wonders how many other women with long black hair and a “generic accent” he’s hooked up with. 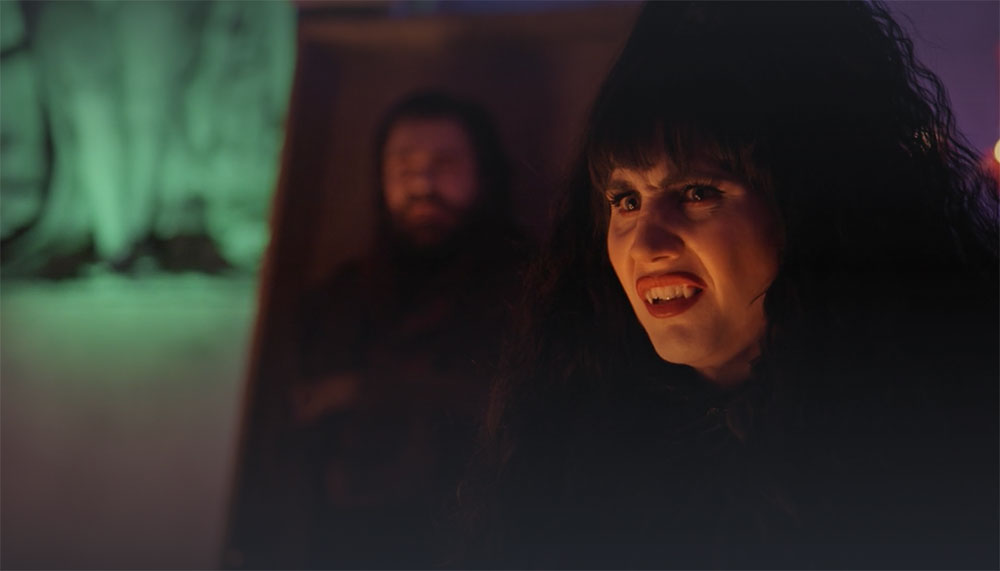 Turns out, the answer seems to be…a lot — including another person with long black hair and a European accent: Nandor.

In the end, who should save the day? Of course, it’s Guillermo. We began the episode with him pondering about his life, and wondering if being a familiar is just childish bullshit and a terrible career choice. But the gang actually gets to watch him save their lives, as he volunteers to collect the vampires’ semen on a regular basis in exchange for a small cut of the witches’ business profit.