An in-depth interview with versatile actor and beloved horror icon, Bill Moseley, discussing his successful, 30+ year career in the genre (part 1 of 3).

Editor’s Note: Our writer, Billy Stamper, had the pleasure to sit down with one of our favorite horror heroes, the great Bill Moseley. In part one of his three-part interview with Moseley, he talks to him about his background as an actor and the role that started it all, his iconic portrayal of Chop-Top Sawyer in The Texas Chainsaw Massacre 2. 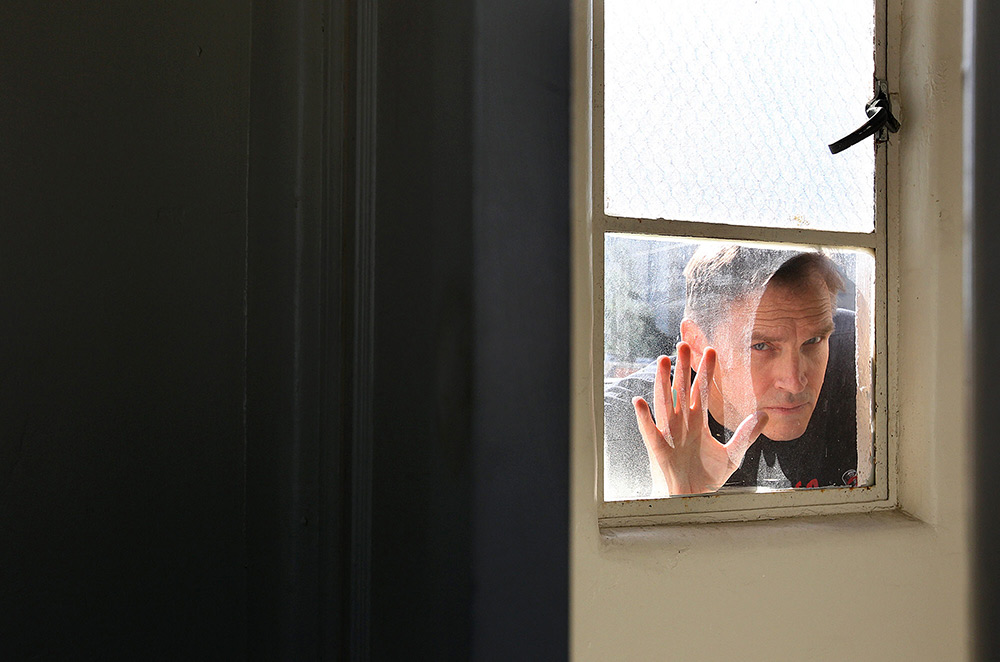 Billy Stamper: Hello, and thank you so much for your time. You’re one of my favorite actors, and it’s an honor. I want to start by asking you what first inspired you to become an actor?

Bill Moseley: What inspired me to be an actor was the fact that I always like to do dress up and stuff, characters and such, and I’d run around. I actually remember dressing up as a policeman for my 2nd-grade Halloween show.

I grew up outside of Chicago in a town called Barrington, Illinois. At that time my parents were active in the “Barrington Play Reading Group”. So what they did was actually a stage play with them and other parents around town. What they’d do is take a play like “The Lottery”, and everybody would get the book of the play. Different people would stage different plays every 4 or 5 months. Whoever hosted the play would turn their living room into a set of the play and have dinner.

A bunch of the parents would hold the book in their hands and would basically act out these plays. Once in a while, depending on the play, they would need a kid or two. That’s how I really got into it. I got drafted and did a play called “The Lottery” and one called “A 1000 Clowns”. There was always the need for a kid, and I got drafted. But I really enjoyed it. I loved being on stage and working with the grown ups. 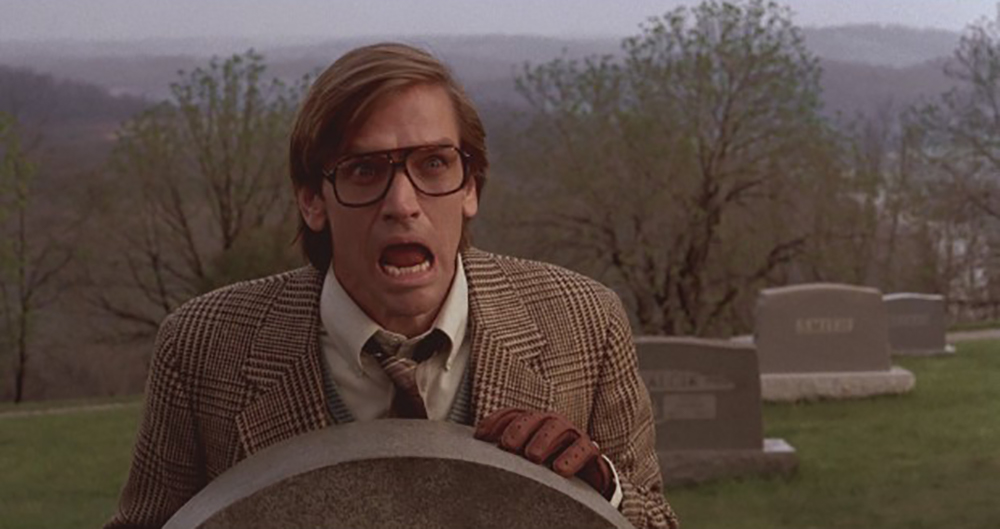 BS: Have you worked on stage as well as film?

BM: Yes, I have worked on stage. Actually, it’s funny because I ended up a bunch of years ago having a band with a guy named Buckethead. I met him in Los Angeles when I was doing a play called “Timothy and Charlie” (a two act play). It was about Timothy Leary and Charles Manson, because they actually historically spent a night together in solitary confinement in San Quentin back in 1974. So it was based on that fact, and the playwright took a lot of liberty in dialogue and action.

I ended up playing Timothy Leary, and my buddy Gill Gayle played Charlie Manson. And you know who loved the play? The real Timothy Leary! He probably came to 6 or 7 of our performances. He loved the play, and I guess loved me playing him. But Gill Gayle had a buddy named Buckethead, and I’ve never really heard of him. He was a Chop-Top fan from Texas Chainsaw Massacre 2. So Buckethead came to meet me, Chop-Top.

That was a stage. I also did the stage in college up in Yale in New Haven, Connecticut, just to get through the winters. Back then, before global warming really set in, the winters were pretty harsh. New Haven is not exactly a big, bright and happy place — especially when the snow would fall. It was like an old brick of gray snow. So I would always go out for a play in my winter terms of my 4 years there, just so I had something to do that was happy work and kept my head out of the snow bank.

BS: Those are some of my favorite horror movies, too, Bill. Can I ask how you got the role of Chop-Top Sawyer in The Texas Chainsaw Massacre 2?

BM: I had been really freaked out by The Texas Chainsaw Massacre in Boston in 1976, just a few years after it had come out. It was playing in a cheap theater , with a double feature called Enter the Dragon, the Bruce Lee movie. It was the old Paramount theater, and a bunch of us were killing an afternoon watching Bruce Lee. A lot of people were standing up screaming, ” Come on Bruce, kick his ass!” I hadn’t seen a Bruce Lee movie before.

Then The Texas Chainsaw Massacre came on and just set the air out of the room. It freaked everybody out — me included. So, for the next couple of years, it really freaked me out somehow…deeply. I would see it every chance I got because I thought, if I saw it enough, it would become more familiar, and I wouldn’t get freaked out so much. That didn’t happen…it just made it worse. 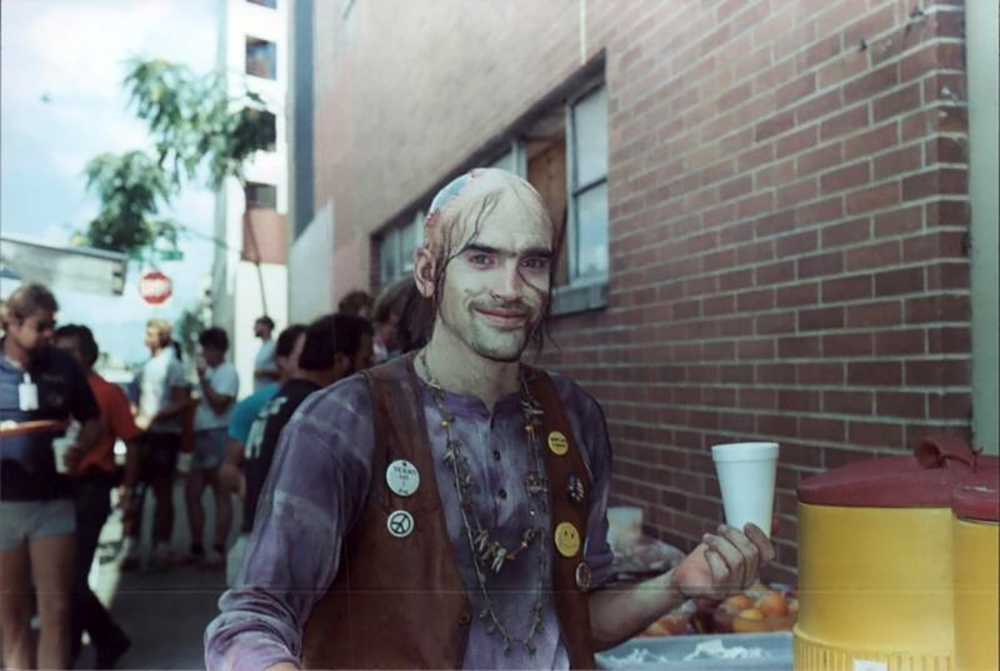 So in 1984, I was living in New York City. But I was working on a ranch in Wyoming. I was working next to a crazy kid who ate a lot of sugar, like Frosted Flakes and popsicles and Mellow Yellow. He was always on a sugar high, this 15 or 16-year-old. One day, he was blabbering away and went into what I call one of his sugar deliriums. He would just start blabbering all kinds of songs from the radio, commercials, and cartoon voices. He was just a nut, but I would try to do my ranch work and not pay attention to him.

She gets her hair done, and she is sitting under the dryer. Then she wants a manicure. So the beautician calls to the back room, “MANICURE,” and all of the sudden you hear a chainsaw starting up. This sliding steel door opens up in the back of the beauty parlor, and here comes “Leatherface”. He ends up menacingly advancing on this woman who is trapped under the dryer. She’s screaming, “Oh, no!” He just starts sawing on her hands. She screams and passes out. They wake her up, and she is still saying, “No, no, no….oh!” Suddenly she realizes she has this fabulous manicure. She goes outside with her beautiful hair and beautiful manicure to show her husband in the pickup truck. I gave myself that cameo, and I dressed and got made up like Ed Neil (the hitchhiker in the original The Texas Chainsaw Massacre). My line was something like, “Hey, hi, honey.” She said, “Look, honey, I got the best manicure ever!”And I said, “Hey, that’s great honey, we should celebrate with some head cheese.”

I had gone out and bought a hunk of head cheese, which doesn’t look like much but it’s pretty foul. So that turned into about a 5 minute short.

A  couple months to a year later, I was in LA (where I worked as a magazine writer) and working for a science magazine called “Omni”. At the time, I was covering some science fiction movie out in LA. Actually, it was the sequel to 2001: A Space Odyssey, which was called 2010. So I was flown out to cover that movie and brought a copy of “Texas Chainsaw Manicure”.

I showed it to an old high school classmate of mine, who was a successful screenwriter in LA. He loved it and said, “Hey man, my writing partner and I have an office across the hall at Paramount Pictures from Tobe Hooper. If you want to give me a copy of “Chainsaw Manicure” I can walk it over and show it to him”. I said, “Yeah, that would be cool”. Because I didn’t know what I was going to do with it, it cost me some dough, and I had no real plans for it. 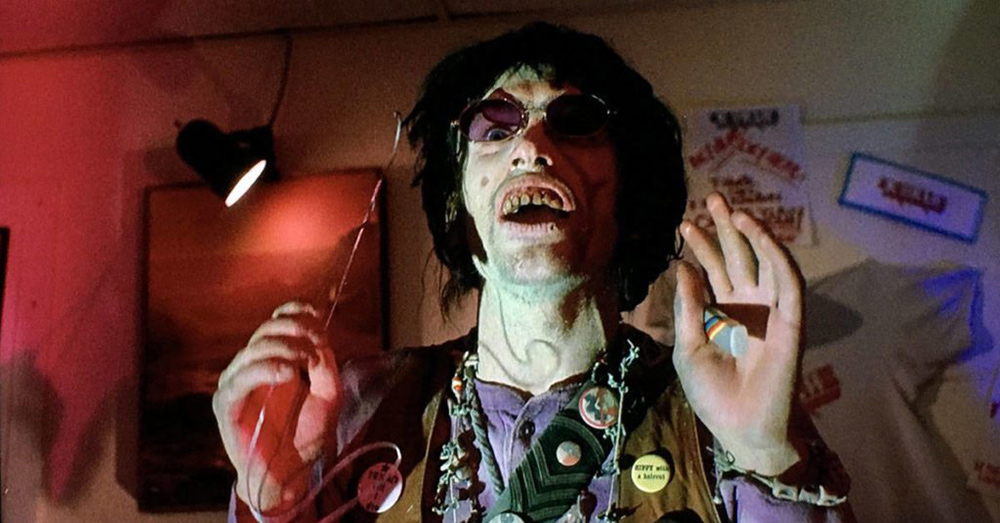 So my buddy actually did walk it across the hallway. Tobe actually watched it and was so excited by it that he ended up bringing in his producing partner, Steven Spielberg. They both loved it and loved my cameo as the hitchhiker.