Chimera is a riveting and thought provoking sci-fi thriller/drama…but it’s first and foremost a movie about family. 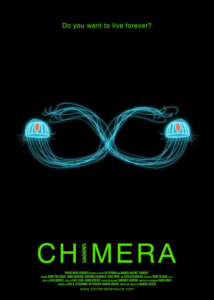 Quint (Henry Ian Cusick, also known as Desmond from Lost) has lost his wife (Karishma Ahluwalia) to multiple system atrophy. When he finds out both of his children are dying from the same affliction, he will go to any length to make sure he doesn’t lose them, too.

He is a scientist with plenty of tools at his disposal and he aims to use them to decode and use the DNA of the Turritopsis jellyfish. This animal is essentially immortal, leading Quint to believe he can make his children immortal as well.

Kathleen Quinlan of The Hills Have Eyes remake and Horns plays what may be considered the antagonist of the film, Masterson. She and her lackey, American Horror Story: Freak Show’s Erika Ervin/Amazon Eve, knew Quint before his life took a turn. Masterson is willing to help get Quint the final resources needed for his project if only he’ll help her save a family member in return. A former co-worker of Quint’s also tries to help him but seems to disagree morally with his ideas and methods.

Chimera is a joint effort from India, the United Arab Emirates and the U.S., from writer/director Maurice Haeems and co-director Jay Sitaram. It leans heavily on scientific information and jargon throughout, so be prepared for that.

From the very beginning, the music sets the tone and the immediate, brutal start to the film will test your discomfort levels early on. Though the first three minutes have no dialogue, there is exposition provided by ethereal voice overs for much of the movie. Due to some of these voice overs and conversations, you may come to believe that Quint is not quite what you’d call a reliable narrator.

There are many sequences of bright or dream-like imagery and clips, sometimes with repetitive or philosophical dialogue. Chimera is interesting because it doesn’t appear to take a straightforward, narrative approach, nor is it completely abstract.

It is unquestionably a thriller/horror within the sci-fi genre because it features all of the main features of those movie genres: mystery, gore and moral quandaries surrounding the human condition.

Questions such as “will they be human [if they’re immortal]?” and “without my family, why would I want to live forever?” are posed by different characters, and prove that there was thought put into the premise and the characters.

The acting is great across the board, no matter how disturbing or dramatic the scene. The two main characters, as played by Cusick and Quinlan, are especially wonderful — they make you believe every idea and emotion expressed, whether with words or just a look. The film’s editing is also notable, because a story that isn’t a perfect straight line can always use visual help in being told.

Chimera does feature both graphic/gory scenes and some nudity, so if you’re sensitive to any of that you may want to watch carefully. This movie is perfect for fans of films like Gattaca, Alien, Ex-Machina and 12 Monkeys, and could be compared to Black Mirror.

As you may be able to tell from that list, the science fiction aspect of the movie is its strongest factor, but the darkness and mystery around the plot and characters will keep you involved for its 80-minute runtime.

It is very worth it to stick around for the left turn the third act takes.