Cine-Files: “The Crow” and “Neon Demon”

Posted by:
Tags:  The Crow The Neon Demon

This week I revisit the beautiful heart and soul of the genre, The Crow, and one of the genre’s new masterpieces, The Neon Demon.

In The Crow, love for another drives a person’s hunger for vengeance past the barrier of death, and in The Neon Demon love for oneself leads to hollow souls and a mind-blowing murder. 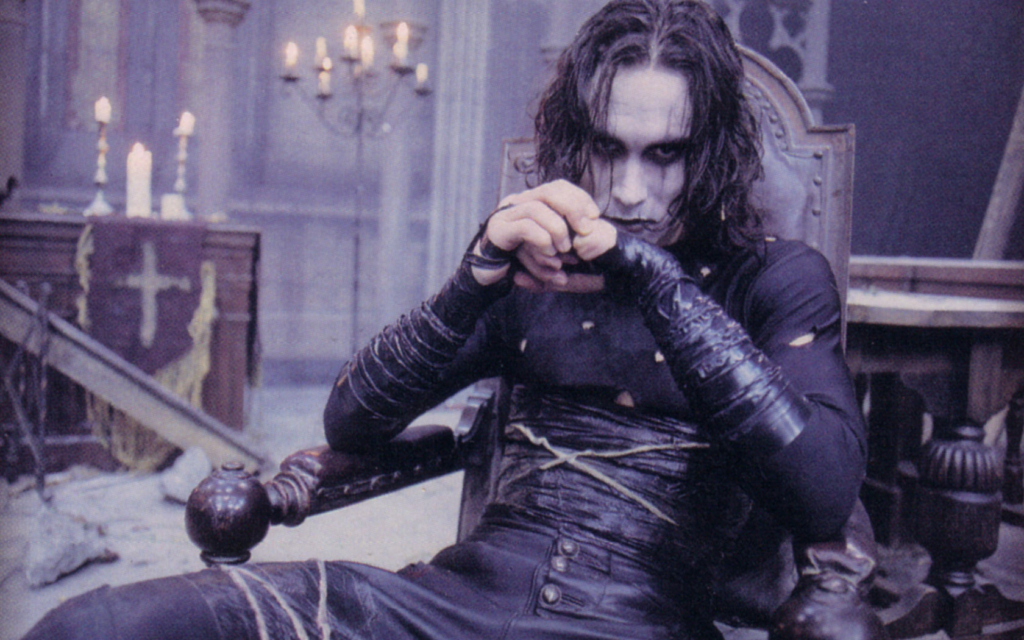 I have never encountered a more universal and unifying movie than The Crow. There are emotionally macabre movies out there, but none of them come close to the obsidian tears of The Crow. It has a specifically painful gut punch.

Anyone who has ever been in love and lost it knows the grim swirl of emotion, that mix of tender sadness, explosive rage, and operatic mourning.  They know the feeling when the thought of spending a day with their lover makes their feet kick up dust clouds of glitter when they first hit the floor.  Then like the explosion of a single bullet, it’s gone – the sudden roaring silence of a heartbeat.

Lines like “He died a year ago, the moment he touched her” make complete sense, as if the words themselves are living things. They may even pull tears out of some of us. They pulled ponds out of me. My ex-girlfriend used to joke about going to see it with me, and how afterwards all the guys walking out of the theater were consoling their girlfriends, and she left the theatre consoling me. 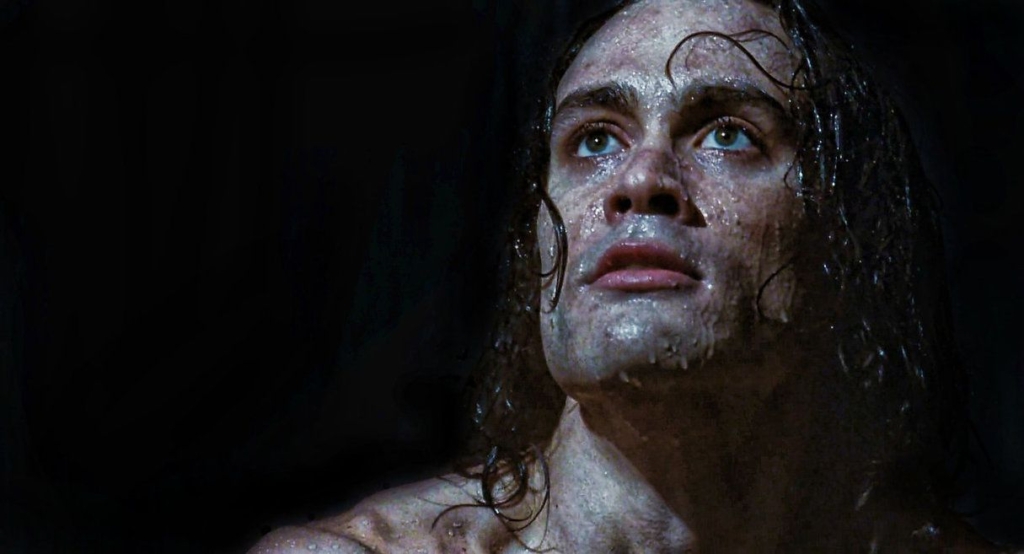 Some scenes feel like we’re watching our own beautiful depressive daydreams: running across the rooftops in the lightning-veined sky, collapsing in exhaustion against a headstone, smearing greasepaint across our dire brows to the melancholy apocalypse of The Cure. Those of us who burn a little hotter and live in shadows that are a little darker than they should be watch The Crow the way one would take a vitamin. The forbidden nourishment it provides the heart has the power to change everything.

It’s an entire philosophy, an all-encompassing worldview. The Crow can turn the blood black, like a hot tar embrace. The Crow tells you things may never be the same again. But that’s a good thing, because you shouldn’t feel better. Revel in your sadness. Commit words to it and write depressive, evil poetry. Flood your world with the negative creative energy your heartbreak creates.

We all want to paint up like ghosts and destroy the things that are wrong in our lives. Grab them by the throat, force a shotgun full of pawned engagement rings down their throats, and make them understand how sad and lost we are. 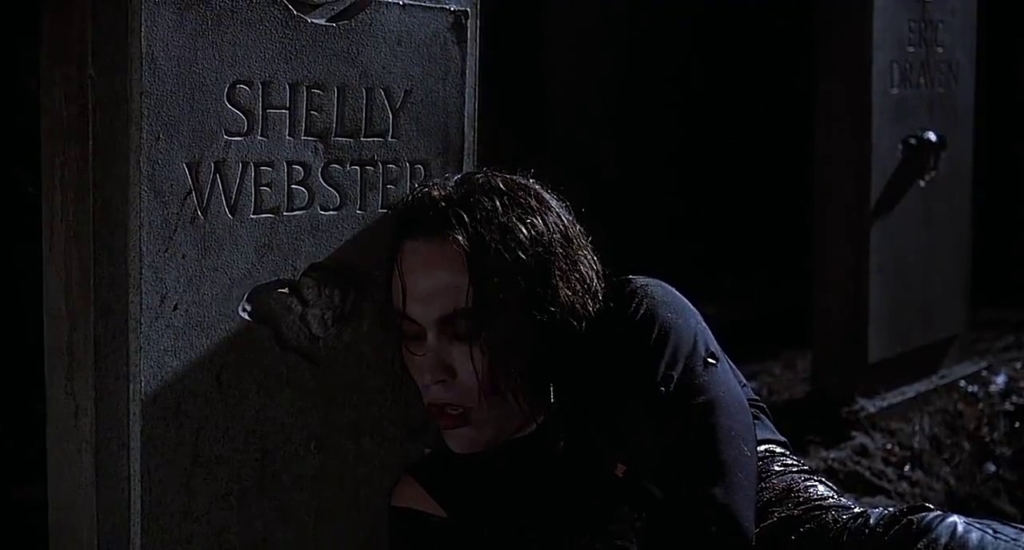 We may all walk on the same wet sidewalks, but those people are tiers upon tiers of multiverses away from us.

The Crow can be both the rallying cry of a broken heart, and a gentle lullaby. The worse you feel, the more often you should watch it.

The human eye is subjected to a variety of style assaults. Visual reality is defined by style. It is the most powerful and convincing reality, and it is everywhere. Wherever you turn, there is a different kind of style. There are always glittering showers of style burying your eyes. Some of it can be beautiful, visually intelligent, and unforgettable. The Neon Demon has that kind of style.

It’s difficult to say what a “true” artist is, but I believe one ability an artist needs to have is complete confidence and control of the style of art they’re working with. Nicolas Winding Refn has this control over his film The Neon Demon.

One of the criticisms that is hurled at The Neon Demon is the fact that it is all style, and no substance. I disagree, because sometimes style is where you can find the substance. I would say the same thing to critics of Dario Argento’s Suspiria. Also, I think director Nicolas Winding Refn is trying to trick the anterior insula of our brains into a kind of color-bending, cinematic hypnosis. One of the specific intentions of The Neon Demon is to make you stare at the shapes and colors so you could fall into the picture. 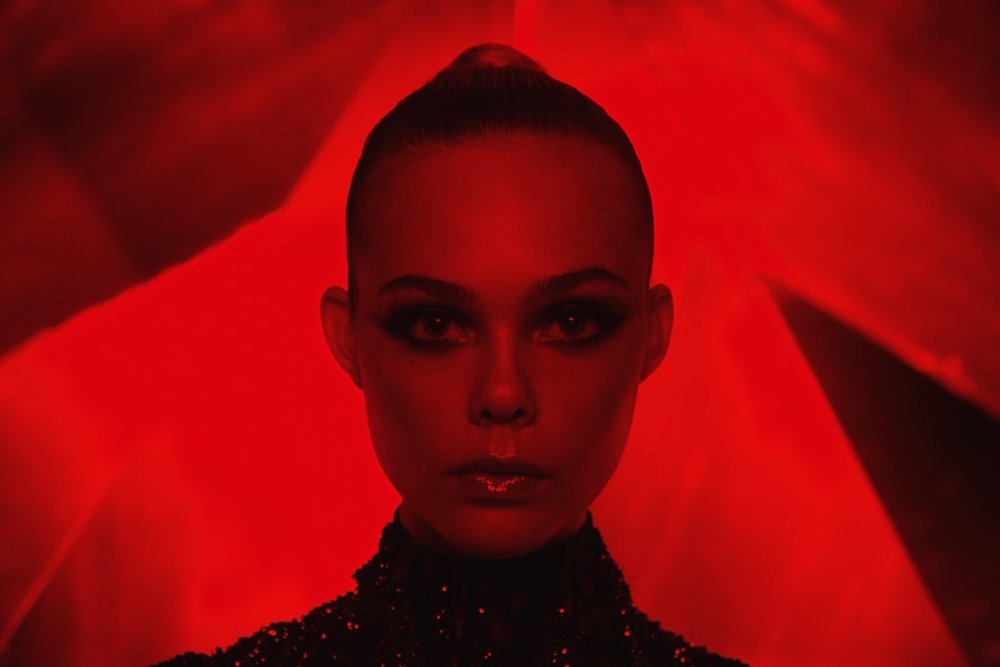 His film is a statement against vanity and the appalling things some people do to keep up with the nouveau chic. And he expresses this statement by using a visual language of nouveau motion picture chic. One of the things that I find unique about the picture is how Elle Fanning’s organic, human, and innocent beauty is often placed in the foreground, while colored geometric shapes and patterns are in the background.

Elle is dead-center in the middle of the screen for many of the most beautiful and visually elegant scenes, and a majority of those scenes are framed and soaked by screaming color and linear scenery – wallpaper patterns, cityscapes, folds in curtains, window panes, and floor tiles, for example.

Something else I noticed in The Neon Demon is how the models seem to accept artificiality as the norm. Fakery and falsehood are normal states of mind for them. Not to simplify the scene, but when Ruby has sex with the corpse, I think it’s partially because she feels comfortable and attracted to the lifelessness and coldness of the body. I don’t think it’s a coincidence that her day job is putting makeup on cold, dead things. 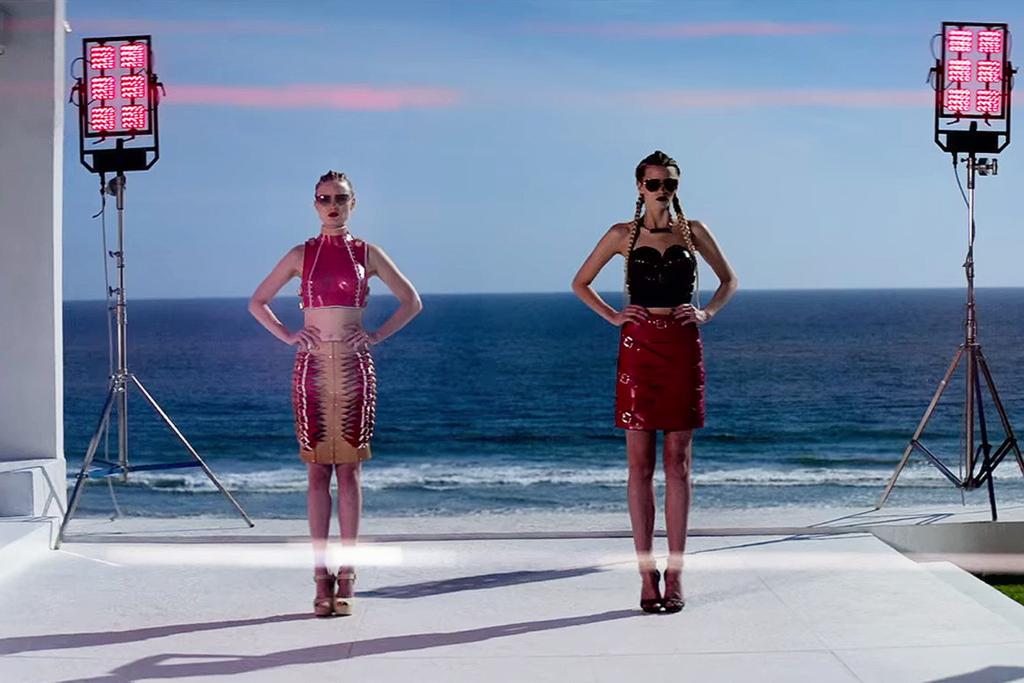 The models seem to feel as though they aren’t even visible, or worthy of being seen, unless they have on the trendiest new shades of makeup. They are unsatisfied and uncomfortable with pale, fleshy shades. Everything is unnatural plum purples and apple-peel reds.

Elle’s character Jesse seems to come to life, an electric life, when she wears bedazzled makeup. It is, indeed, a stunning look, but for her I get the feeling it’s psychological. By the end of the movie her heart is well into the corruption process, and she casually bedazzles her face. Jesse doesn’t even have a photo shoot. It seems to be the way she sees herself – a rainbow reflection of flesh, a fantasy. But merely a reflection. A beautiful lie.

‘The Neon Demon’ is one of the most visually astonishing horror films I have ever seen. This is solid proof that horror IS art.