This week, we explore what’s out there with two refreshingly original and compelling films featuring great female performances, Pod and Under the Skin.

It’s the final week of my special Women in Horror Month edition of  The Cine-Files. As a reminder, The Cine-Files is a weekly film journal where I review and rate the movies I’m watching on a color scale, inspired by my love of Sour Patch Kids candy — green for the worst films, orange for average films, red for the great films, and blue for the absolute best of the best.

In you case you missed it, my first two posts this month focused on my love for Ginger Snaps 2: Unleashed and Ginger Snaps Back: The Beginning, followed by reviews of Avenged (Savage) and Antibirth. 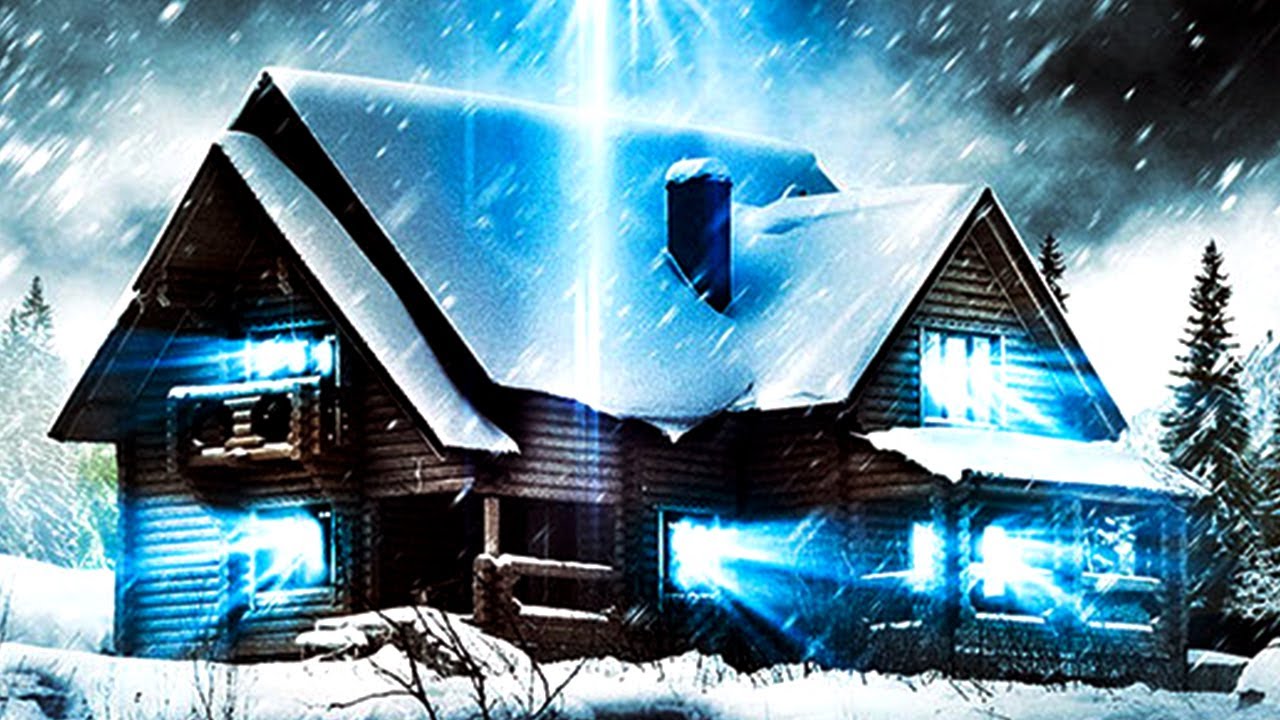 Sometimes I check out the YouTube trailers to the movies I talk about in this column.  And like watching the rusty butter-knife autopsy of a cute kitten, I can’t help but take a look at the comments.  The comments section itself is irrefutable evidence supporting censorship (which I say in a mildly sarcastic tone).  The comments to the Pod trailer particularly percolated my penchant for getting pissed off at pricks who prattle on about how everything sucks.

The experience I had watching it was totally lost on them.  I almost pitied them, but they were just too ignorant and insulting.  They just wanted monsters.  Just another conveyor-belt sweet milkshake movie that could easily be sucked down with a bendy straw.  Then again, they probably wouldn’t even be able to handle the complicated aesthetic sensibilities of the bendy straw, unless there was a Star Wars or Marvel logo on it.

I apologize for lashing out.  I wanted to freak out in the Pod comments section, but I decided it would be better to blow off some steam here.

Boils and ghouls, we have heard it (and said it ourselves) all before: the consensus of the moviegoing public is that there are no original movies anymore.  Everything is a sequel, prequel, reboot, or remake.  Yet when a filmmaker decides to do something new, or take a risk with emotions or the narrative, they are cut down for it (Mother anyone?)  That makes studios afraid to pay for new ideas, and filmmakers suffer monolithic challenges as a result.  Fucking Internet, no wonder we just keep getting the same old same old. 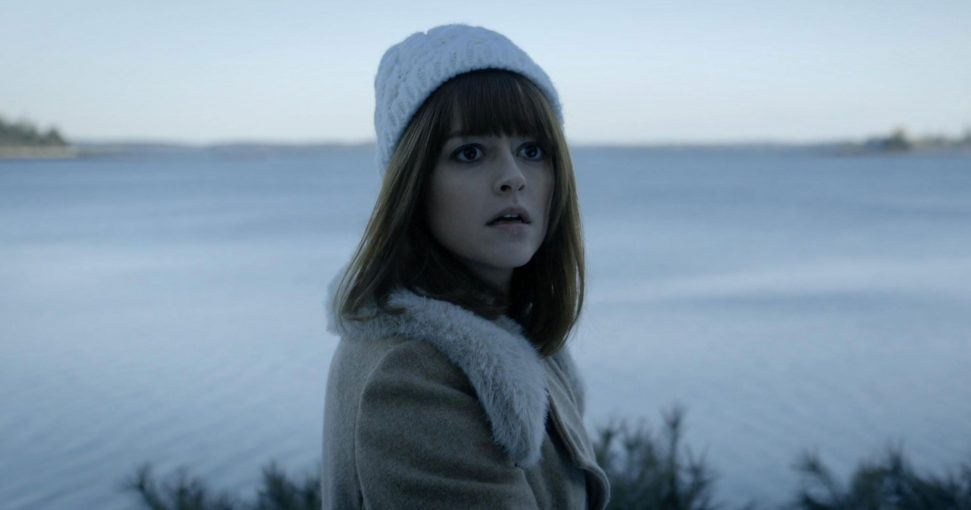 Ok, off the temper tantrum.  Pod is a tasty yet disquieting little slice of alien/government paranoia.  We get started in the snow-covered forest, where a panicky and agitated guy named Martin is running around trying to find his dog.  He hears the dog barking.  And then we ALL hear that horrible squeal.  The one we know too well in horror movies.  The dog’s body is shown from a distance, and as Martin gets closer, he sees what killed it.  But we only see the expression on his face, and it’s a shattering one.

It really takes off the emergency break on the imagination.  I wholeheartedly encourage this type of horror storytelling.  While there is a place for movies that show the big monster from head-to-toe, there is also something to be said for films that require the imagination to fill in the blanks.

After the prologue, we get down to business with Ed knocking at his sister’s front door.  Ed is a psychiatrist, and his sister Lyla is an alcoholic.  Seeing him sparks a blinding explosion of rage from her, and, without being fed by a bendyless straw, we figure out easily that there is some very bad water poisoning their relationship, and it is mountains away from flowing under the bridge.

Ed tells her that he wouldn’t be upsetting stalemate-calmed waters if it wasn’t for a good reason.  Their brother, Martin, left him a bizarre message on his answering machine.  This message makes Ed fear that Martin’s Gulf War PTSD psychosis and depression have resurfaced, and he wants to take Lyla and save Martin from himself.  She is aggressively reluctant, until she hears the message.  And he convinces her to sober up and hand over her flask by using one of her childhood favorites — a bag of sour gummy worms.  That is so sweet.  It’s beyond adorable, and one of my favorite parts of the movie.  It’s little things like that that make me fall in love with a movie. 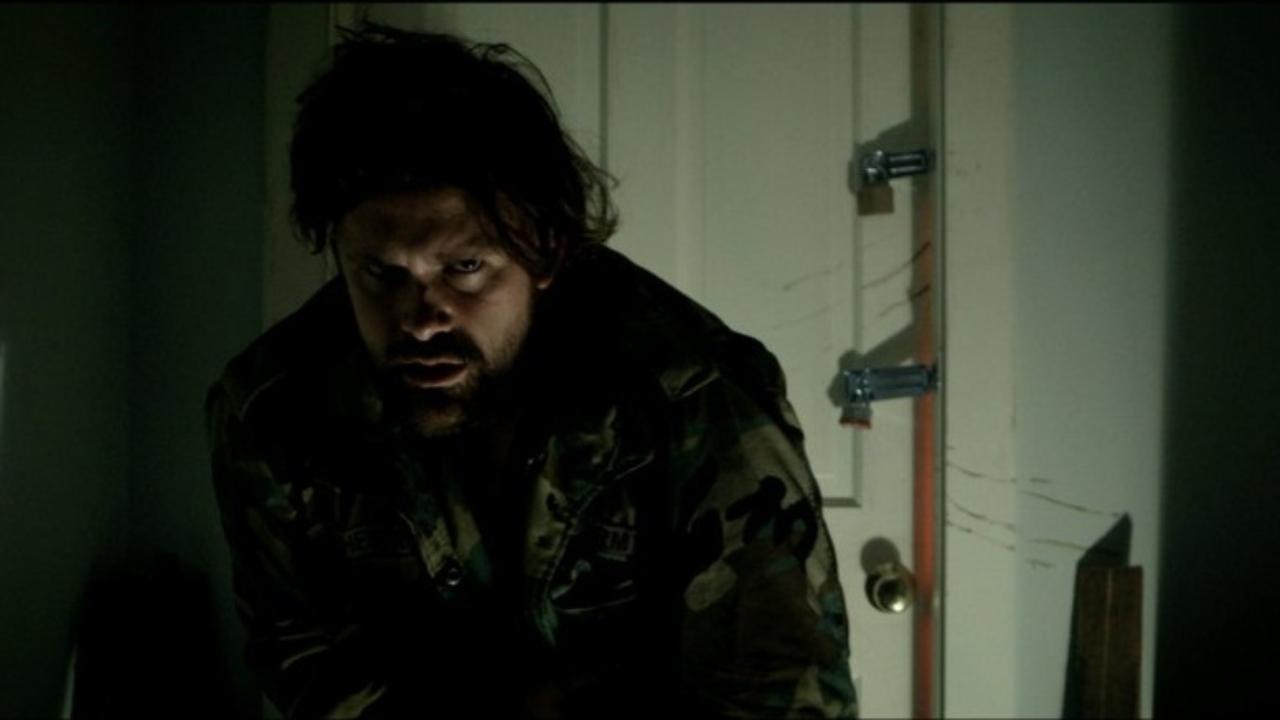 What Lyla and Ed find when they get to Martin’s house is not a brilliant plot twist, or any other rare species of suspenseful storytelling.  That’s my way of saying “nothing new here”.  But what IS startling is the blazingly over-caffeinated and unmedicated performance by Brian Morvant as Martin.  He is uncontrollable, and the only thing stopping him from killing his siblings is the fact that they’re family, and they talk him out of it.  But that isn’t much of an accomplishment, since Lauren Ashley Carter (who plays Lyla) could easily convince me to do or not do pretty much anything.

They slowly earn his trust, and as they do so he reveals what happened to him.  But only through tiny particles of schizophrenic ranting.  There is still no need for straws, though, because it’s easy to figure out the direction these characters are going in.  Or is it? 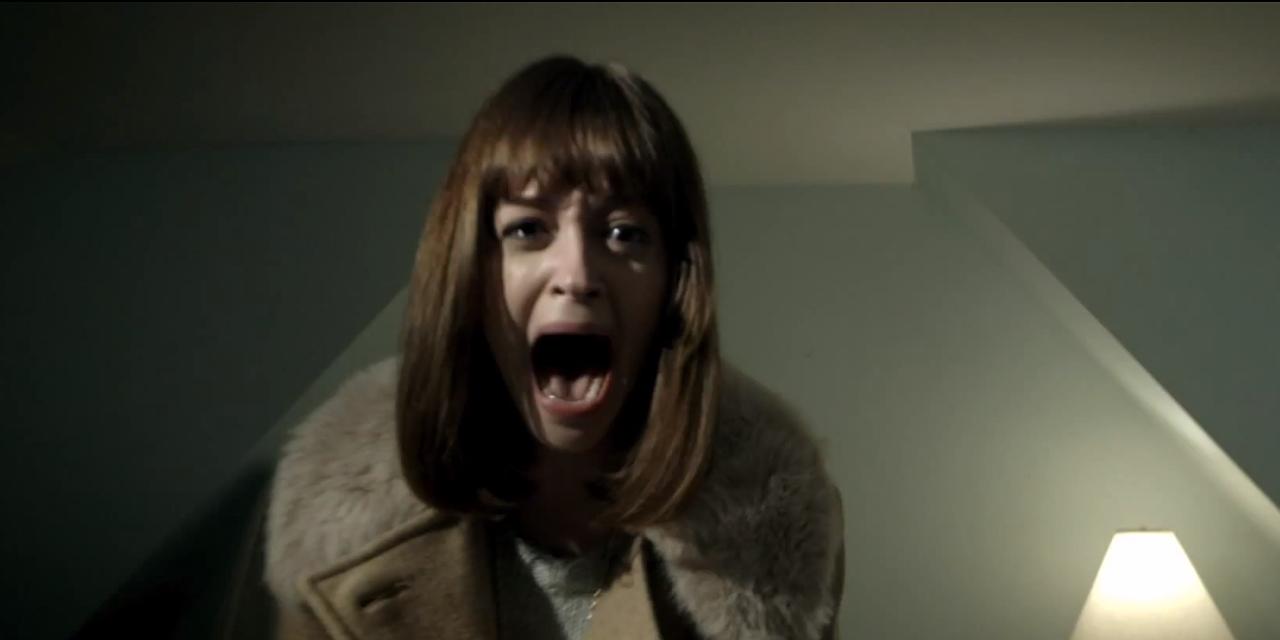 POD is another must-see, with several unexpected events and visuals.  The editing gives it a strobe-lit kind of psychedelic flavor at times, which keeps the viewer on their toes.  And it features yet another naturalistic and emotional performance by Lauren Ashley Carter.  I haven’t been this impressed by an actress in a long time.  She is exceptional in every film I see her in.  My favorite Woman of Horror this year is definitely Lauren Ashley Carter.

Under the Skin (2013, directed by Jonathan Glazer) 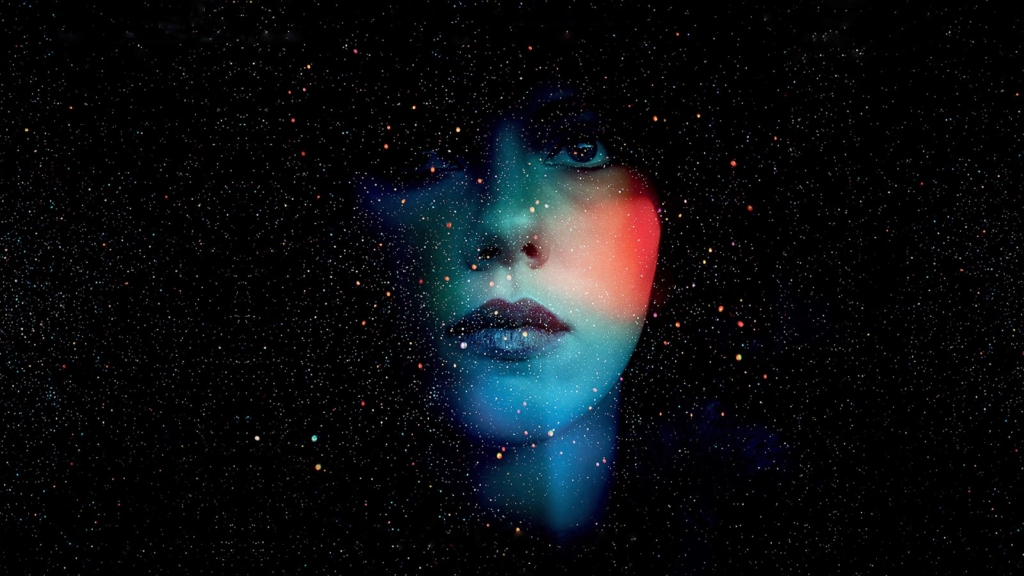 A nameless feminine space anomaly (Scarlett Johansson, clearly before her no-nudity clause) arrives on Earth.  Glasgow, to be a little more precise.  While inside of some kind of white color vacuum, she steals the clothing of a prostitute, and cruises around at night picking up men.  Preying mostly on lonely men, she lures them to a dilapidated old house with the promise of companionship.

Once inside the house, she leads them to another color vacuum, only this time it’s a black one.  She strips down to her underwear (sometimes less than that), and as she emotionlessly and robotically approaches the men, they sink into blackness.

The answerless “why?” is the core question in this wonderful mystery of a film. 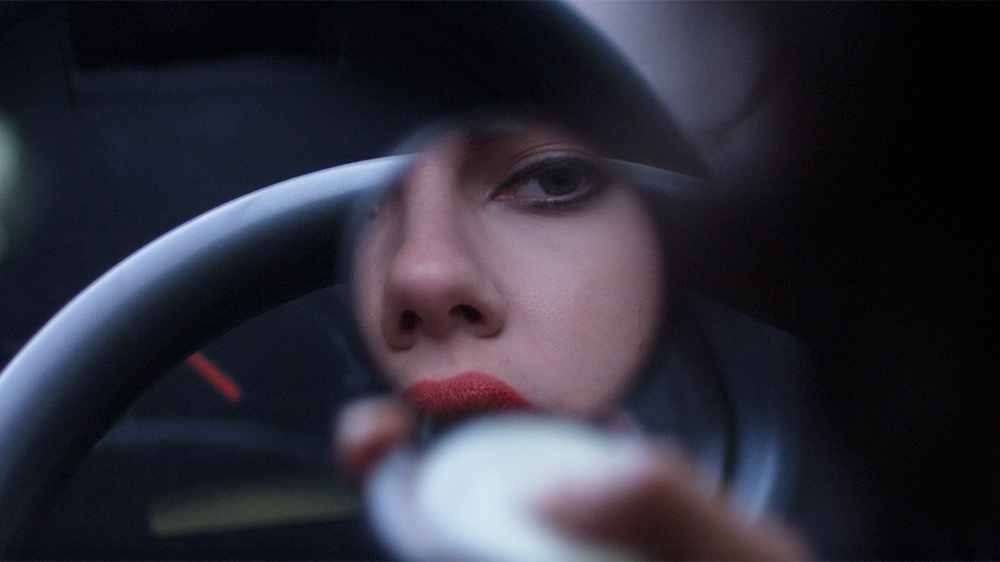 Her true purpose is never explained.  She is clearly on the Earth in order to collect male lifeforces, and has learned the ways of human seduction in order to use it as a hunting tool.  As the film progresses, she begins to experience feelings and emotions.  Desire.  Empathy.  Guilt.  Fear.  Abandonment.  There is a fascinating scene where she attempts to join the human race by eating a piece of cake.  Her facial expressions as she experiences cake for the first time are a joy to watch.  I’m not going to spoil the rest of the cake, though.

Along with this understated charm and emotional growth, we also witness her treat people as a functional curiosity.  There is a scene on a beach that is so upsetting  I almost couldn’t finish watching the movie.  Not because I was offended, but because of how crushingly cold and nihilistic it was.  It was almost too bleak. 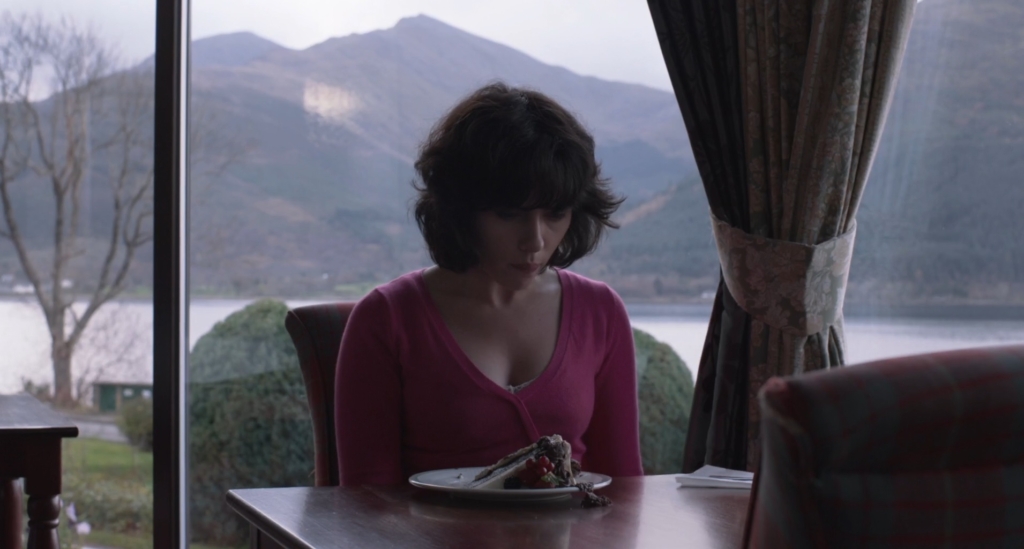 Watching Scarlett the soulless alien discover the sexuality of the human vessel she is in is compelling.  She is brilliant in this movie!  With very little dialogue, we follow her as she starts off the movie as an unrepentant predator and slowly becomes more and human by the minute.  It’s like the assassin alien is beginning to enjoy being human, and gleefully soaks up every new experience as she has them.

I love the subtle caress of warmth we get, even though it is brief.  In the film’s solitary positive sex scene, she makes love to a man in his cozy bedroom, illuminated only by the soft red glow of a space heater.  The muted oranges and reds seep into her skin so beautifully as she looks at herself in the mirror and casually bends her knees and curls her toes –learning to appreciate the delicate but fiercely alive human body. 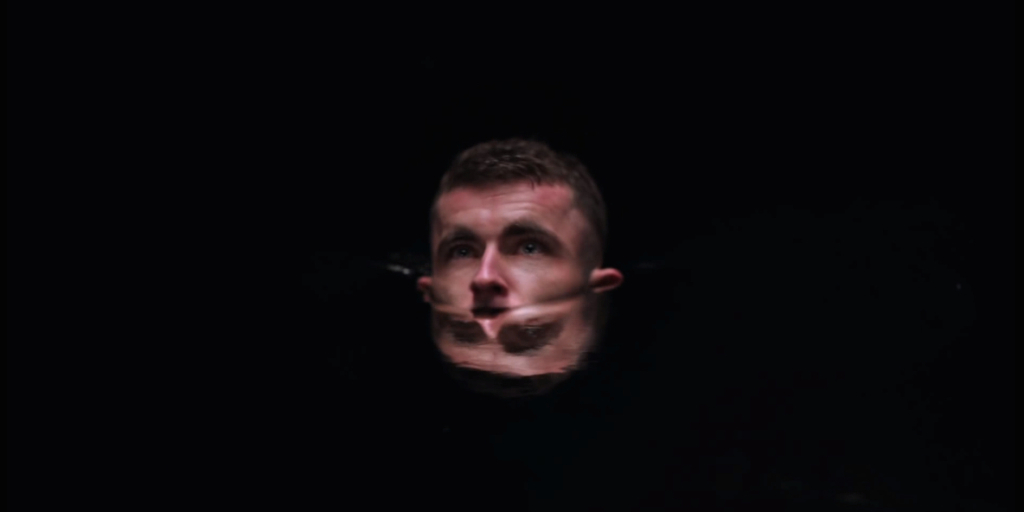 But that is merely a blink of positivity.  In the Skin goes to some very dark and terrible places, and doesn’t let you look away.

I cry very easily at movies, and this one fucking crushed me.  Please keep in mind that this is an arthouse movie as much as it is a sci-fi/horror movie, so be patient.  It is dead-quiet and pitch-black, with absolutely no interest in explaining anything to you.  But the intention isn’t to be frustrating, but rather to submerge you inside the same psychological netherworld the characters in the film seen to exist in.