Irreverent and laugh out loud fun, “Hawk and Rev: Vampire Slayers” doesn’t want to be anything but a good time — and to that end, it more than succeeds. 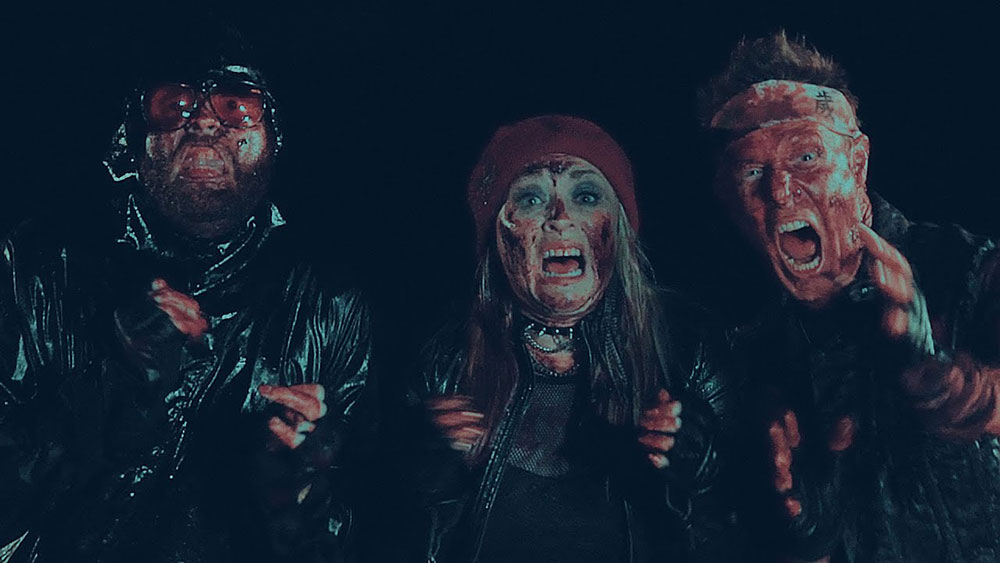 Moods can make or break movies. It’s just a fact. A good movie can be made mediocre, or a terrible movie can be made amazing, just because you happened to watch it while in the exact right (or wrong) mood for that particular viewing experience. But a great movie? Now, that’s a whole other ball game. A great movie can CHANGE your mood.

Let’s get this out there, right off the bat: Ryan Barton-Grimley’s Hawk and Rev: Vampire Slayers is a great movie.

Now don’t get me wrong; it’s not a classic movie. It’s not a serious movie. It’s not going to win an Oscar. But it’s a great movie, nonetheless. I watched this with a friend (and personally, I think this movie is one that you really should watch with friends) when neither of us had any idea what we wanted to watch, and we were both a little flat. Within five minutes of the film’s start, we were trading the more ridiculous lines — and there are plenty of extremely quotable lines — and laughing uncontrollably.

Hawk and Rev is a party movie.

It’s a movie to throw on when you want to check your brain at the door and just laugh your ass off. That’s not to say it’s a “so bad it’s good” kind of film. In no way is it badly written, shot, acted or directed. In fact, the actors are all perfectly cast and do a great job embodying their characters. They understand exactly what the movie is, and they never try to make it anything it’s not.

Phillip “Hawk” Hawkins (Barton-Grimley) is a vampire slayer. He absolutely lives for that. Everything else in his totally messed up, paranoia-fueled, delusional life is secondary. We meet him as he wakes up in a tent, in his parents’ backyard, in the small town of Santa Muerte, California. He heads towards the house and discovers the locks have been changed. Paying it no mind, he breaks in and makes breakfast.

He then sees a note from his parents informing him of their desire for him to move out of the backyard and take responsibility for his life. They know he has broken in and let him know, by doing so, he’s set off an alarm that has alerted the police. As Hawk reads the note, the voices of his parents are heard in really upbeat, cheerful sounding mom and pop voices. This contrast in tone between the words being said and the way the words are read makes this quite a funny scene. Anyway, it’s safe to say Hawk’s life is a mess.

These are our two main, totally unlikely, heroes. Hawk is at his job, where he is a night security guard for an empty warehouse, when he spots some “filthy blood sucking vampires”. He decides it’s his sworn duty to take out these bloodsuckers and save his hometown. Needless to say, this doesn’t prove to be an easy task. Hawk and Rev — along with a female writer named Theo (Jana Savage), who Hawk soon nicknames “Fiery Fox” — form the worst vampire slaying team in movie history. These guys make The Frog Brothers look like geniuses.

The scene where Hawk flawlessly recites 20 or so lines from movies as diverse as Dirty Dancing, Die Hard, Rocky, and The Lost Boys is reason enough to watch this movie.

At first, the humor in this movie is so obvious and over the top that you might miss some of the more subtle stuff, such as Hawk referring to From Dusk till Dawn as ”that movie where the director is trying to act”, and Hawk’s penchant for hanging up on everyone he phones at least twice. The dialogue is so well done that you’ll soon be snot laughing despite yourself. I defy you to sit through the exchange where Hawk tells Rev about how Fiery Fox was pumping him for information without laughing out loud. And his conversations with his boss are just pure gold.

Enhancing the experience — and this movie is an experience — is the simply wonderful score, sound design and cinematography. The music ranges from hackneyed Spaghetti Western to full on 80s action movie cheese. All of this is accompanied by a palate of sound effects lifted directly from the worst martial arts movies you can imagine. It’s simply beautiful!

Stylistically, we get lots of “hero walk” footage and montages of Hawk, Rev and Fiery Fox training, including a super fun one of Fiery Fox totally kicking Rev’s ass, and every other staple of the 80s action genre that you can think of. Shots of Hawk in aviator sunglasses transitioning to the US flag, slow mo in abundance, blood splattering the camera lens…. it’s all there! Hawk even wears a Karate Kid headband. And right towards the end of the movie, there is a totally wonderful parody of the scene in Predator where Arnold and Carl Weathers slap hands together, which had me almost crying with laughter.

This is a horror comedy, and although the horror is never scary or shocking, there are some nice gore effects — mainly played for laughs.

This movie is really well written by Barton-Grimley. The storyline is cohesive enough to hold your interest. There are some fun plot “twists” you’ll see coming from miles away, but that’s by design.

Again, this movie never takes itself seriously, it is firmly in the ridiculous mode all the time. It immediately evokes feelings of the cult classics Bad Taste and The Greasy Strangler and that, in my book, is high praise indeed.

The acting from the entire cast is pitch perfect, and the characters are an absolute blast. Barton-Grimley plays Hawk fairly straight and very paranoid, a perfect foil to Schneider’s completely over-the-top Rev, who my friend straight away dubbed “not T.J. Miller”. Jasper would be right at home as the bad guy in Segal’s Under Siege 2. Savage’s Fiery Fox explains her promiscuity away by telling us she had a liberal arts education (perfection). It’s a delightfully ragtag team that makes the most of the stellar script.

I should also mention that the runtime for Hawk and Rev: Vampire Slayers is a snappy 84 minutes, and it is perfectly paced.

I began this review by saying moods make movies. So, I’ll conclude by saying that great movies make moods. For my money, Hawk and Rev</