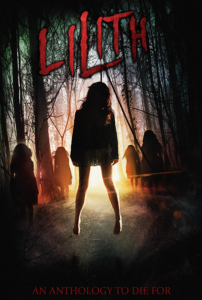 We’re excited to offer the first look at the upcoming indie horror anthology film Lilith. Not only does the film star genre favorites Vernon Wells and Felissa Rose, but it also features rising stars Devanny Pinn and Lara Jean Mumert. The impressive cast is matched by the trailer that promises a good time, gruesome deaths, and plenty of blood. All of that sounds like a recipe for an awesome movie!

Stay up to date with Lilith and follow the film on Facebook here. Check out the official press release and watch the trailer below.

FROM THE OFFICIAL PRESS RELEASE:

Filmmaker Alex T. Hwang has dropped the first trailer for “Lilith”, a terrifying Horror Anthology in five segments. While each segment is a stand alone story, they all feature various forms of Lilith, a demon of the night who “embodies the emotional and spiritual aspects of darkness such as terror and sensuality.” Exorcism, forbidden love, soul collecting, infidelity, and serial killers are just several of the themes that ignites Lilith’s wrath in these horrifying tales.

Unlike many other horror anthologies, Hwang directs each segment to create a unified, precise vision that will even shock seasoned horror fans.

The film will be completed this spring and will be seeking world wide distribution. Until then, here’s the first look at the film with this NSFW trailer! Lilith will pay you a visit soon!