A retelling of the Burke and Hare murders that is very watchable thanks to a strong cast and great dialogue from iconic poet Dylan Thomas. 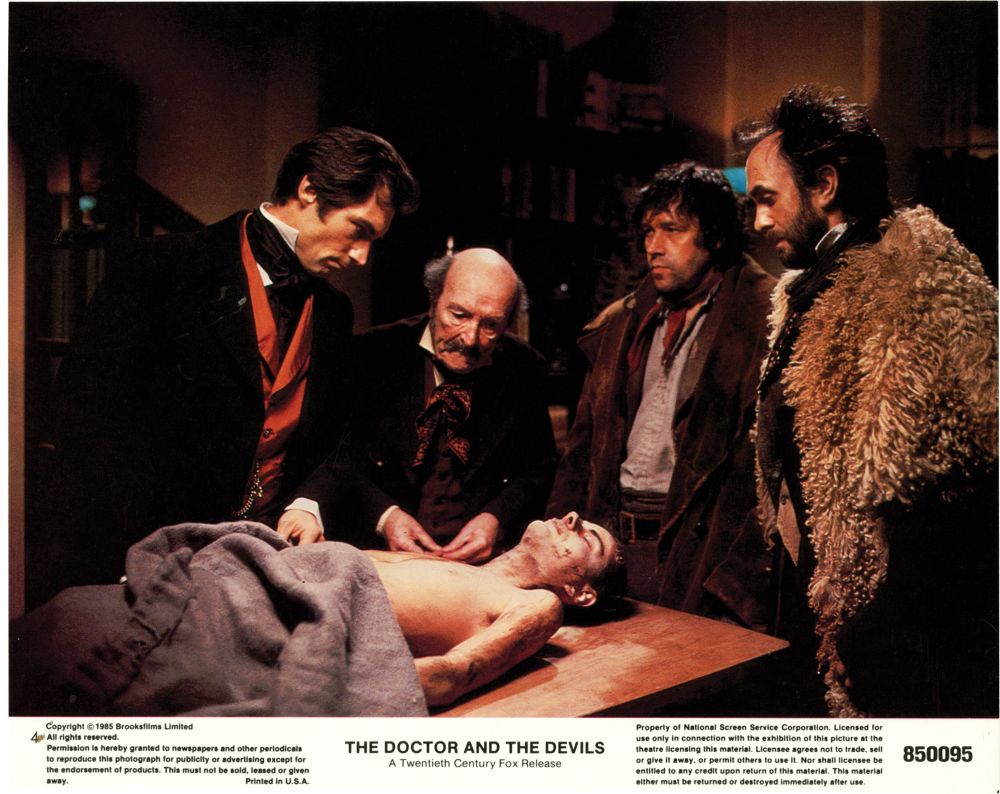 Thanks to a dearth of dead bodies to experiment on, a medical professor resorts to buying fresh cadavers from a couple of low-life murderers. Let’s dig into 1985’s “The Doctor and The Devils”, directed by Freddie Francis!

Frequent  Hammer Horror director Freddie Francis closes out his cinematic career with this version of the true story murders of William Burke and William Hare, who killed sixteen people in the 1800s for profit by selling their bodies to a dissector in Scotland.

Most of the interpretations of this story take quite a bit to get going, but not this one. Fallon and Broom (their version of Burke and Hare) take all of ten minutes to switch on their dark side and start their macabre entrepreneurship.

Based on a 1940’s screenplay by the legendary Welsh poet Dylan Thomas, Mel Brooks brought it to life on the big screen and thanks to Francis’s prerogative, many of Thomas’s words end up on film. It is a bright spot in the film along with the performance of the famous British model Twiggy (Jennie Bailey).

Thomas focuses a more direct approach to exploring the morality of the story, showcasing the brink of barbarism and civilization.

There are some unexpectedly deep commentaries on society that are pertinent generations later. It ends with a palpable bit of irony as well, and I’d experience nothing less from such an accomplished and adored writer.

A stellar cast makes this an easy watch, regardless of your familiarity with the source material.

Timothy Dalton would go on to directly play James Bond in three films and would be followed by Pierce Brosnan, whose villain in Tomorrow Never Dies was Jonathan Pryce, the Robert Fallon in Fallon and Broom of this film.

Sir Patrick Stewart needs no introduction, the man is genre and nerd pop culture royalty. He plays Professor Macklin who does his best to thwart Doctor Rock’s illegal cadaver acquisitions, unsuccessfully of course otherwise we wouldn’t have a movie.

Julian Sands (Dr. Murray) plays the titular role in Warlock, in two out of three of those films.

Dark things happened in the back alleys of London at the turn of that century. Removing the whimsy that most other Burke and Hare stories portray is the right move. It was necessary to not make them fun-loving. They are serial killers after all.

Twiggy (Jennie), the British model, commands the screen in every scene. She’s dulled down to look like an impoverished prostitute yet her beauty still shines through and her acting skills are noteworthy. She showed the propensity to be the lead actor in a proper dramatic role.

A Burke and Hare adaptation is like a nineteen-sixties rock band covering old classics or blues songs, or punk bands covering Louie, Louie; everyone does it. None of them are terribly inspired, and it’s up to the voice whether you can stomach it.

The story of the true murders of Burke and Hare has been retold time and again. A previous Dig covered the 1971 version, but John Landis directed a 2010 Burke and Hare starring Simon Pegg and Andy Serkis.