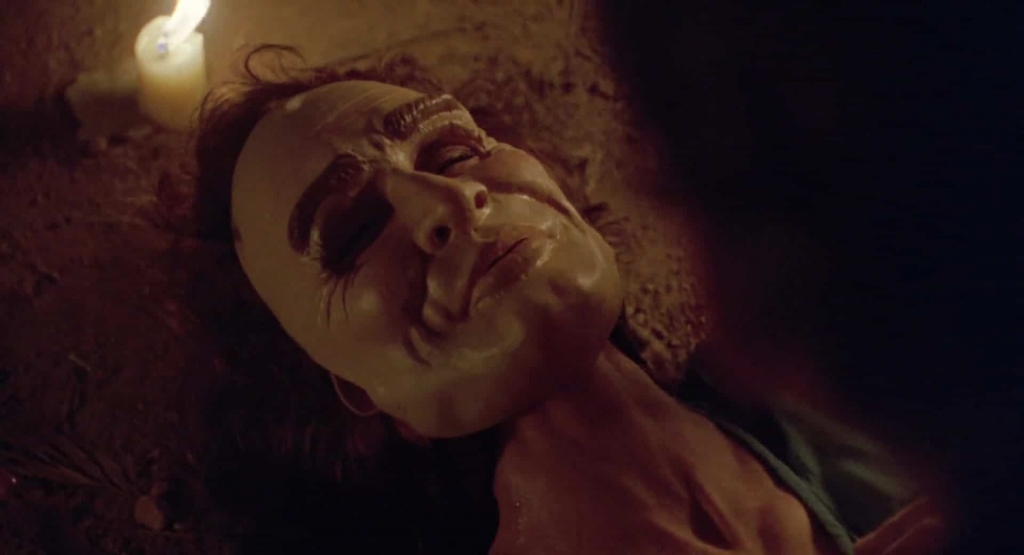 An LA detective and a psychic hunt the soul of a serial killer whose evil hops from body to body as he terrorizes the city. Let’s dig into 1990’s “The First Power”, directed by Robert Resnikoff!

Originally titled Transit, writer/director Robert Resnikoff told Fangoria in February of 1990 that he was inspired to write the story by a real life death row inmate named Gary Gilmore who believed he would be reincarnated after execution.

The film, which cost almost $10 million, tells the story of the Pentagram Killer and the Detective (Lou Diamond Phillips) hunting him. The killer is executed, against the insistence of an informant, and transits his evil into another body.

It seems to have all the right ingredients for the first third of the running time.

Unfortunately, it jumped the shark for me when they started leaning heavy on the psychic angle. Being that the psychic, Tess, ends up being the love interest, they never fully commit and focus on the why. I also don’t get why the killer wears a cheap mask. 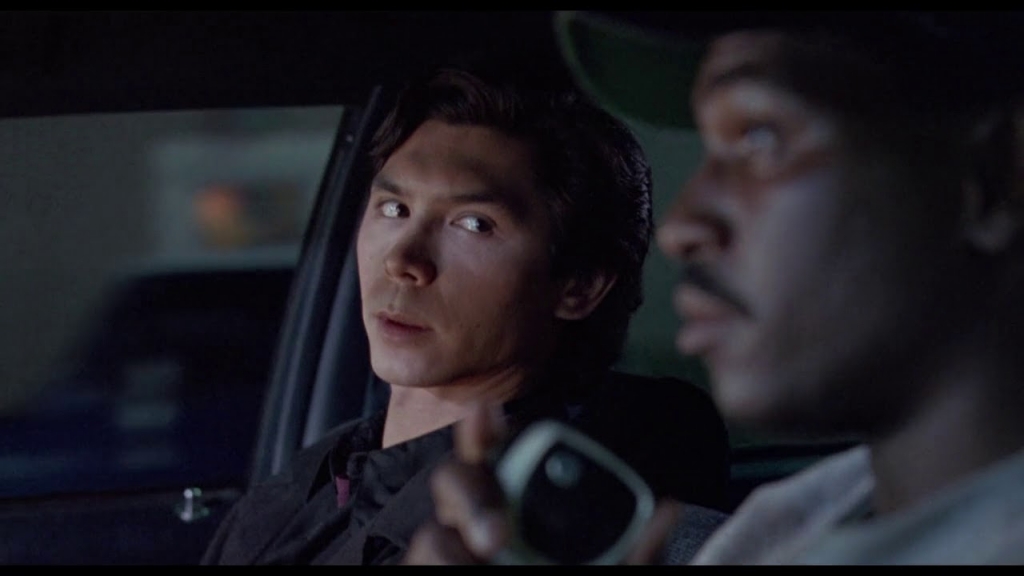 I get that the consciousness of the Pentagram Killer is passed as he and his subsequent hosts die, but they don’t show him as someone else regardless — that is, not until he possesses a homeless woman who is hilarious in the vein of Carol Kane.

The structure is so off that there is nothing really driving the story besides continuous encounters with the killer that are filmed like templates.

I still didn’t hate the movie; I just wanted more for it and for Lou. He put in a solid performance.

Lou Diamond Phillips (Logan) was an eighties sensation who is still working today. Whether it was playing Richie Valens in La Bamba, or starring alongside a bevy of brat packers in Young Guns and Young Guns II (with a reported third installment being worked on now), there was hardly a hotter ticket in the last half of that decade. .

Tracy Griffith (Tess) stars opposite Pam Springsteen (Angela) as Marcia in Sleepaway Camp III, as well as a starring role in Skeeter (1993). 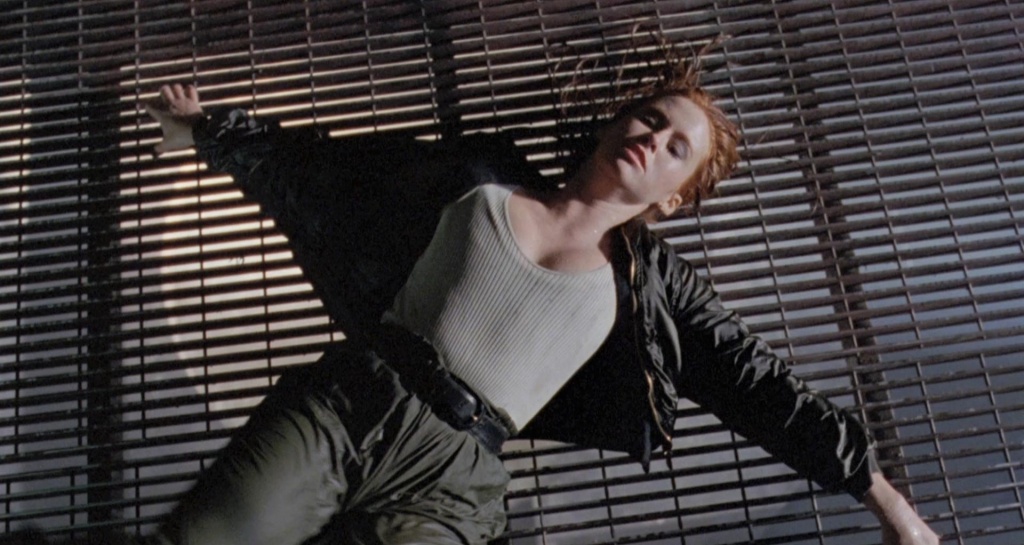 David Gale has a bit part here as a Monsignor but will be most recognizable as Dr. Hill from Stuart Gordon’s Re-Animator and Bride of Re-Animator by Brian Yuzna.

Jeff Kober (Patrick) who plays a very menacing and evil killer here played Jacob Hale, the political rival to the SAMCRO gang in the fx series Sons of Anarchy.

Two bit parts are also worth noting: First, Mark Bringelson plays a small role as a civilian who’s car is commandeered with him along for the ride and you may remember him as his character Sebastian Timms the man responsible for swapping formulas and creating The Lawnmower Man.

Second, none other than Bill Moseley plays a Bartender in what seems like a scene created specifically to use the line “Should have told me these were the kind of spirits you were looking for.” to the psychic. If I have to tell you what Bill is from, GTFO.

The mask was unnecessary, but not as silly as the psychic angle. They use it to explain some exposition and get the information to our protagonist, but it never lends to suspend belief. They could have just played it straight supernatural and let the audience buy in. 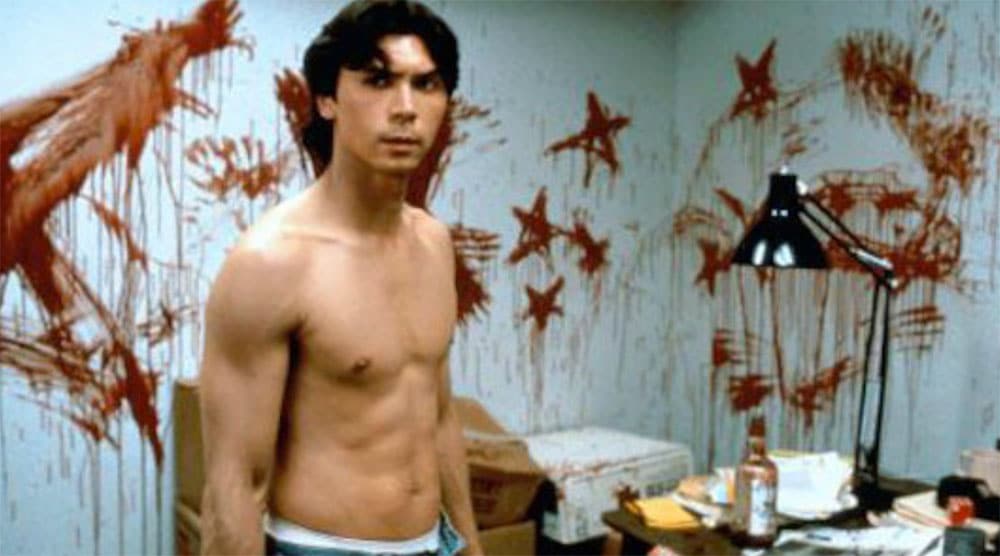 Lou Diamond Phillips has that Pharrell Williams energy where he seems to age at a snail’s pace. His current salt and pepper facial hair may draw away from that effect but the guy was a heartthrob for a long minute.

The supernatural crime thriller is an interesting sub-genre. It takes some skill to guide the audience into suspending their beliefs enough to accept the fantastical evil that plays out. They dropped the ball here by muddying the waters with the psychic, but it is still a viable type of story to tell in my opinion.

Though the door was left open for a sequel (most likely at the behest of producers who love to bait an audience), nothing materialized in spite of decent box office success.

A Blu-ray put out by Scorpion Releasing is available through Diabolik DVD.