“The Visitor” is a turkey of a film that boasts an all-time impressive cast but is too derivative to be great or to forge a distinct path. Proxies for God and Satan battle over the soul of a gifted, powerful child. Let’s dig into 1979’s THE VISITOR, directed by Giulio Paradisi!

This might not be in anyone’s top ten for Sci-Fi Horror films, or any top ten list for that matter, but it certainly benefits from a legitimate all-star cast.

Every time I see John Huston in a film like this, I wonder if he’s there for the money or because the director begged him to be on set in hopes that his film-making brilliance would somehow enter them by proximity or osmosis.

Little bits of The Omen with a less definite outcome for the young spawn, there is potential with the story, but it never feels like a cohesive effort.

Franco Nero’s Christ-like figure, with his bleached blonde hair and facial hair, was too creepy to be innocent. 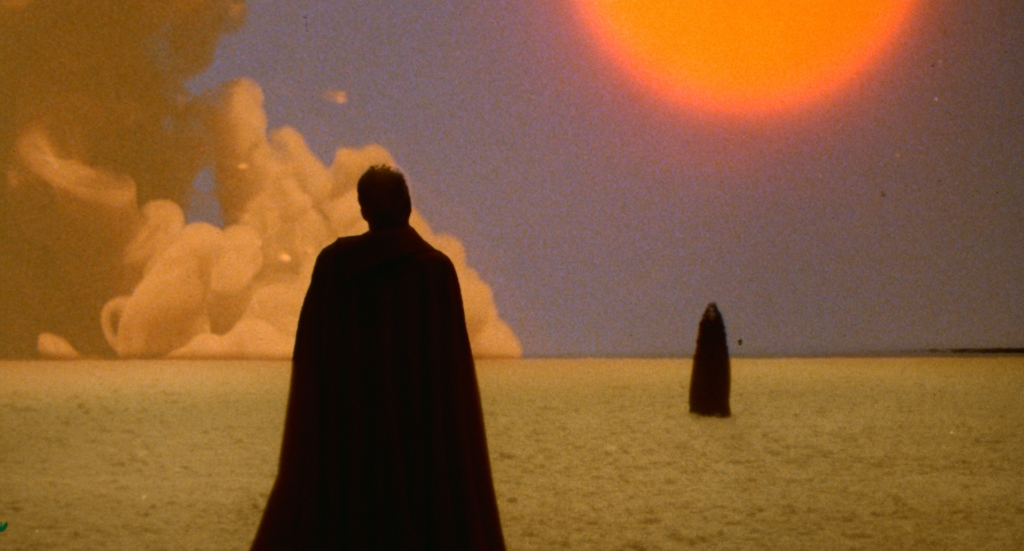 There lies the problem with avoiding rigid structure and roles when writing. Though I can’t argue with the evil side being a bunch of suits in a boardroom, the protagonist – antagonist (Good vs Evil) is never clear and defined enough to care.

Maybe I’m too subject to liking Lance Henriksen or too suspect of religious figures to follow, but either way, it’s a bit messy.

With an ending that is clearly ripped off from prior Sci-Fi blockbuster Steven Spielberg’s Close Encounters of The Third Kind, any hope of originality fades away.

John Huston not only has an acting career that would make anyone blush, but his directing prowess far surpasses acting roles. The Maltese Falcon, Moulin Rouge, The Misfits — the list is long and prodigious. It should also be noted he is the father of Anjelica (The Witches, The Addams Family) and Danny Huston (30 Days of Night).

Lance Henriksen plays Ed Harley in the monster flick with the biggest heart, Pumpkinhead, as well as Bishop in the Alien franchise.

Shelley Winters (Jane Phillips) most endearingly was in the original Poseidon Adventure alongside Gene Hackman, as they traverse an upside-down cruise ship. I had a decent head of hair until the first time I shaved it completely, which was in my teenage years. It never grew back right after that. Shaving a child’s head, let alone a pack of children, for a film instead of using bald caps for the short scene was probably unnecessary.

Joanne Nail (Barbara) has a bit of a Milla Jovovich thing going on, minus the badass action star.

I don’t know that the Good vs Evil trope will ever grow tired, but I would suggest making it more nuanced and layered than Jesus vs Satan.

Arrow Video released a Blu-Ray that is selling for pretty cheap at the moment, though it doesn’t have all that many extras included. You can stream on AMC+, Tubi, Shudder, Kanopy, Hoopla, Amazon’s Freevee, and Fandor.