A run-of-the-mill zombie flick, “Zombie Lakes” looks great, with a fresh scan and English dubbing, but underwhelms in makeup and FX.

The corpses of Nazi soldiers reanimate and emerge from the lake in a quaint french town and terrorize the female population. Let’s dig into 1981’s “Zombie Lake”, directed by Jean Rollin!

Can anyone do for the zombie sub-genre what Taika Waititi and Jermaine Clement did for vampires, making that genre interesting again?

This film is the type of fiendish lullaby that zombie films became known for (sans Return of the Living Dead), arguably until Danny Boyle’s 28 Days Later. It doesn’t help that in-between dialogue, not a whole lot goes on. Chimes and bells and synth pops score the dragging amphibian corpses as they vomit fake blood on the unbelievably beautiful local population of women.

Even the dialogue seems to be the same thing over and over. Ghosts are killing our women. It’s not ghosts. It most certainly is ghosts. 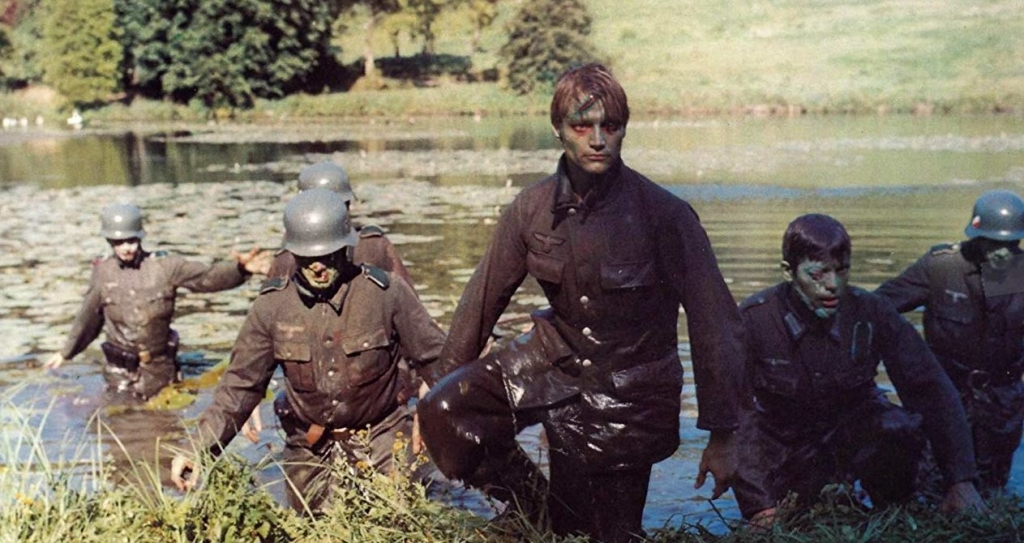 In spite of this diatribe, I liked the film enough.

The Frankenstein-like relationship between the little girl and her somehow father/Nazi zombie allows for some memorable moments. The finale with the requisite flamethrower is fiery. And though the full burns are obviously dummies, the partial burns that the human zombie cast perform are impressive.

It was not the shameful output I expected from the director’s embarrassment of being involved with this film.

There is a plethora of skinny dipping and pervy underwater angles of nude bathers. Why the Nazi Zombies only have a thirst for beautiful young women is a question as old as time in the genre. The first girl at the lake (Pascal Vital) with a golden tan sheds her clothes for a full six-minute opening scene of skinny dipping and nude sunbathing. It feels classy enough in spite of the exploitation value.

I personally have curbed my zombie appetite since Zombieland and that big AMC zombie show flooded pop culture with flesh-eaters, but the unique angle here is a single scene. No other zombie film from this era features a zombie versus zombie battle. None that I can think of at least. That’s the jump-off point in my opinion.

Kino Lorber released a beautiful new HD scan on Blu-ray. You can also stream it on Hoopla.