“Vanessa Ionta Wright is a filmmaker based in Atlanta, GA. She is the co-owner of Above the Line Artistry as well as the co-founder and one of the Festival Directors of the Women in Horror Film Festival (www.WIHFF.com). Vanessa collaborated with Samantha Kolesnik, Mark Simon (One Missed Call), David Irwin (House of 1000 Corpses) and Josh Oliver (Gerald’s Game) on Rainy Season, based on the story by Stephen King.  Vanessa has also directed the short film I Baked Him a Cake and a PSA for the 2018 WiHM Massive Blood Drive. Vanessa graduated from Ohio University with a degree in Video Production & Film. She is a lifelong fan of cinema, most especially the horror genre. Her philosophy on terror and suspense comes from legendary filmmaker Alfred Hitchcock.  He said “There is no terror in the bang, just the anticipation of it.” She enjoys punctuality, scary movies, a quick wit, sandwiches, the music of Michael Jackson, Halloween & Bacon Jam. She does not enjoy bugs, clowns, perpetual lateness, mean people, oppression, laziness, running more than 3 miles or curved walls.” 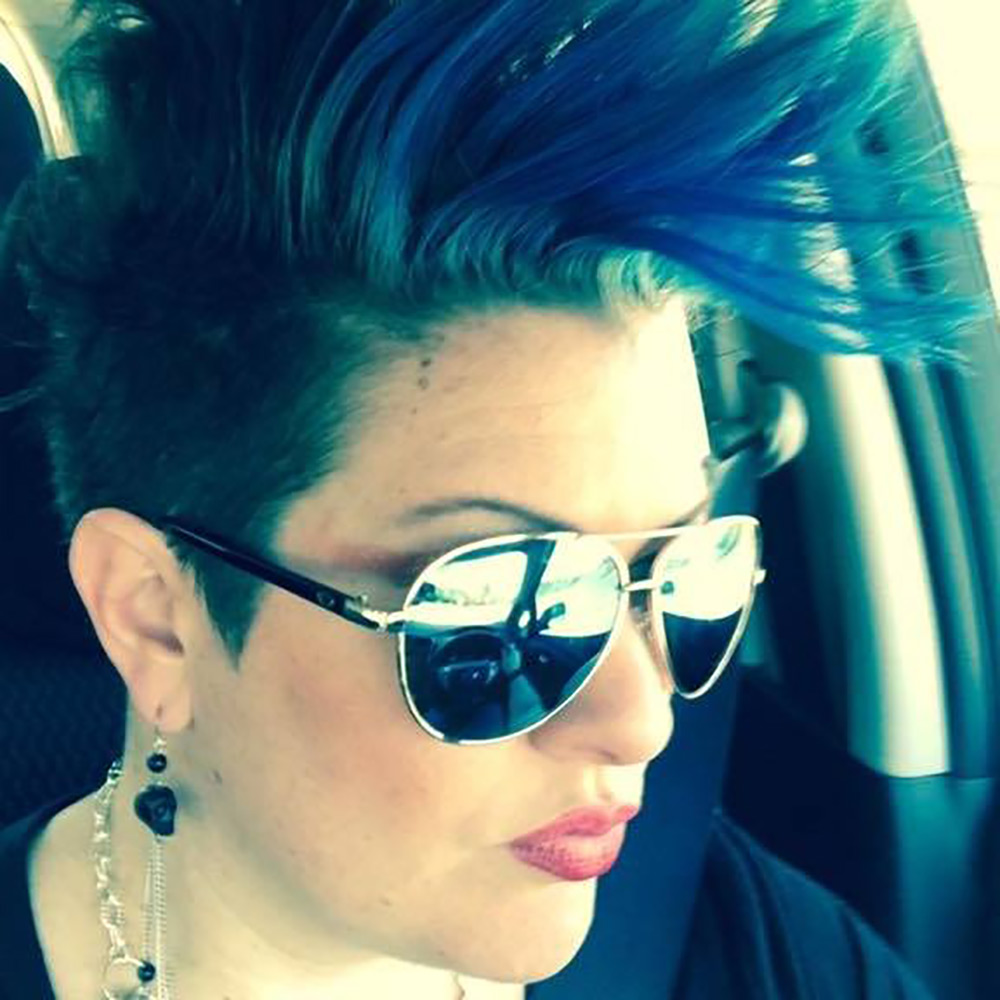 My love of cinema got me into the industry. I have been watching movies since I was very young, and I have always been drawn to the silver screen. I have wonderfully supportive parents, and they really nurtured the creative side of my personality growing up. I love telling stories, and I really love telling them in a visual medium. I was writing and directing before I knew what that meant. I confiscated my parents home movie camera in the late 1980s and spent all of my free time making movies with my friends. There are some “amazing” VHS tapes floating around there. 😉

After graduating college, I moved to LA with some friends in hopes of “making it”. Apparently a million other people had that same plan, 😉  I realized quickly that I wanted to play by my own set of rules, so I made the move to Atlanta and have been building my filmmaking army of creatives even since. 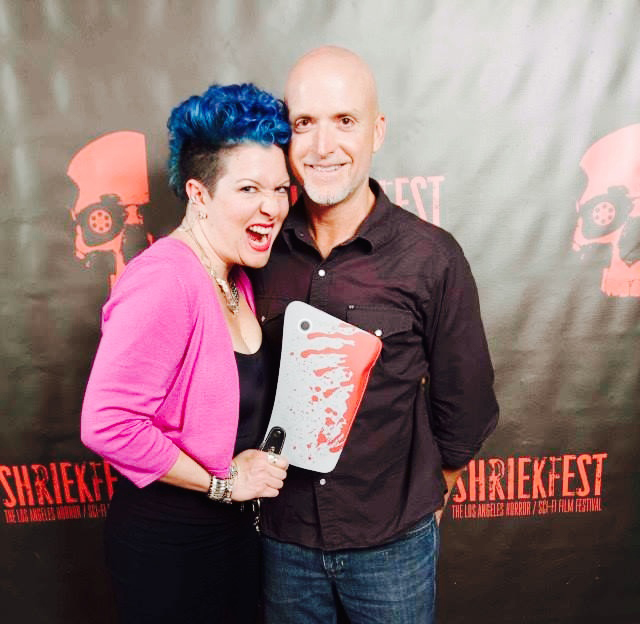 I’m quite tenacious and have heard the word ‘no’ plenty of times, however I always find a way around the ‘no’ to make my goals a reality. I only want to work with passionate people.  I’m a very collaborative filmmaker. I appreciate what each and every person on set brings to the table, and I really strive to honor that.

I’ll be honest, I’m not a huge fan of the term ‘Scream Queen’, personally. It’s cute and whatnot, but I think there is so much more to these women in genre film than this, somewhat misogynistic term. I’ll get off my soapbox and answer the question now! 😉

I’m inspired by so many. I really look at the talent and craft of these actors and filmmakers. As far as performances, I’ve always been inspired by the strength of character. Jamie Lee Curtis (Halloween), Heather Langenkamp (A Nightmare on Elm Street), Bette Davis (Whatever Happened to Baby Jane), Kathy Bates (Misery); these women brought a lot of depth to their characters which I think is why their roles and their films are so iconic. 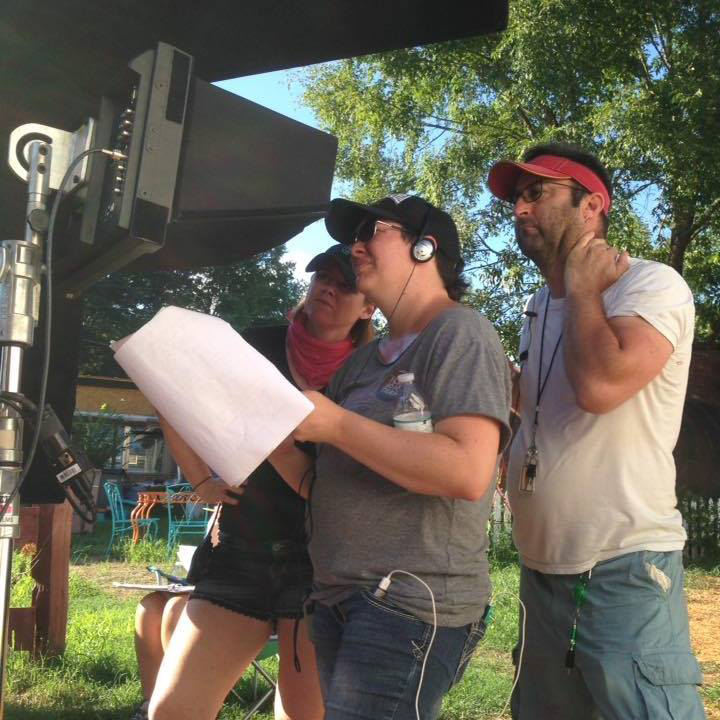 Poltergeist (1982). It was the first horror film that I watched. I was 7 or 8 years old when I saw it, and it absolutely terrified me. I think it scared me so much because it was such a relatable film. You have this happy nuclear family living in the suburbs — and then this terrifying door to the supernatural opens up and literally swallows them up.

It had me questioning everything. Is our house built on top of a cemetery? If I leave my television on after the network sign off, will the white noise suck me in? Are my stuffed animals hiding under my bed going to try and kill me? My answer to all of these questions was, “Probably.”  Yeah, that movie pretty much did it for me…it was all down the rabbit hole from there. 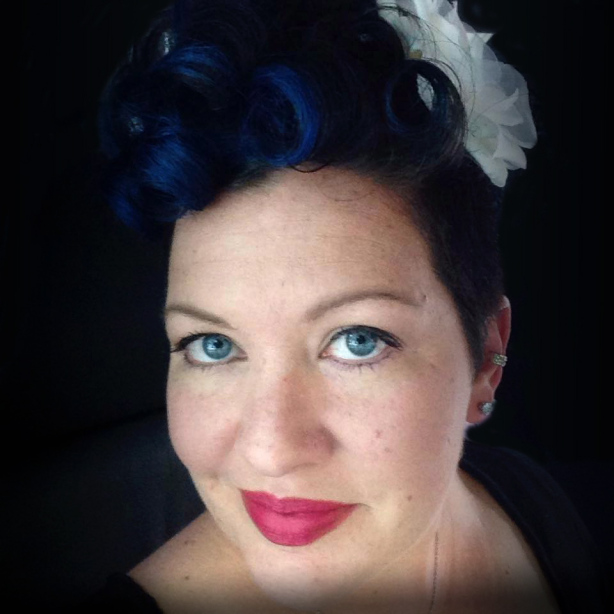 If I’m looking at a script or discussing a concept for a film, I always look for an interesting hook and new perspective. If it’s a story that I would want to watch, I will generally be interested. There needs to be a clear vision. If it’s a story that seems familiar, is it being told from an original point of view? Are the characters well developed?  Are they smart?  Is there a truly unexpected twist?  Is there something deep, psychologically that will stick with the audience after viewing?  If it’s filled with clichés and tired horror tropes, I will steer clear. I also do not care for gratuitous content. If there is no motivation and the story isn’t moving forward, I’ll pass.

I equate watching horror to eating an onion…that shit should stay with you long after you’ve consumed it, and there should many layers! 😉 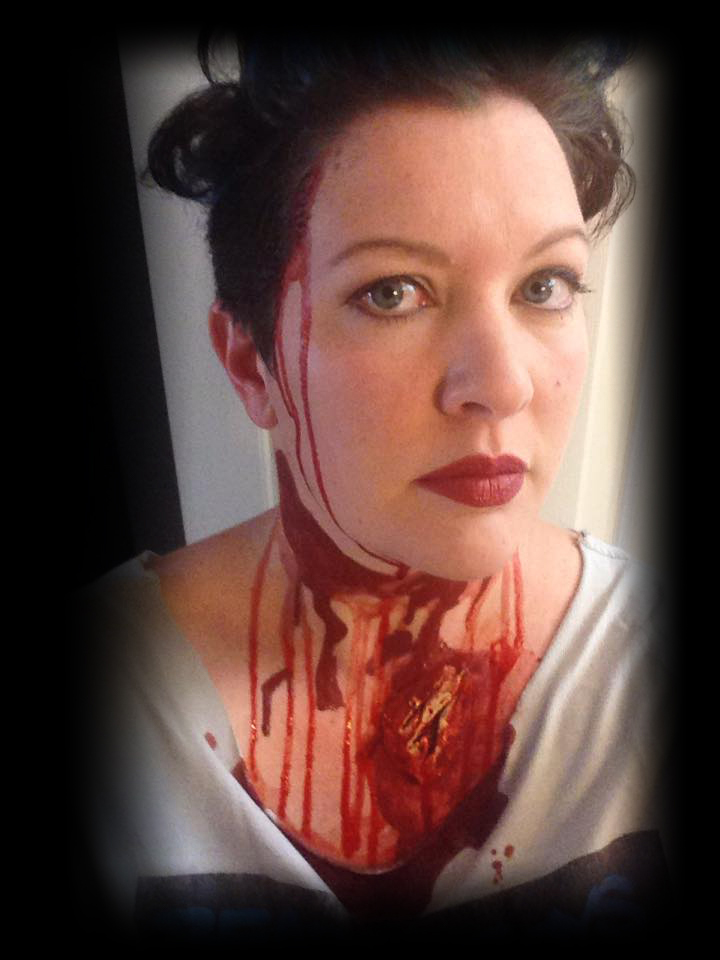 I think women are taking more risks and making more noise now than ever before. And this goes beyond genre filmmaking. We are seeing more and more women in powerful and creative roles both in front of and behind the camera. This is probably even more prominent in the independent world.

Indie filmmaking — hell, just filmmaking in general — has really changed. We have technology at our fingertips that allows just about every person with a story and smartphone to be a filmmaker. This has its pros and cons, of course. Anyone with access to a camera and editing software can be a filmmaker, which dilutes the pool a bit with mediocre and poorly executed content. But the most beneficial side to this is that really talented filmmakers who have dedicated their lives to the craft, now have to opportunity to tell their stories. You no longer need millions of dollars and Hollywood connections to make a film. 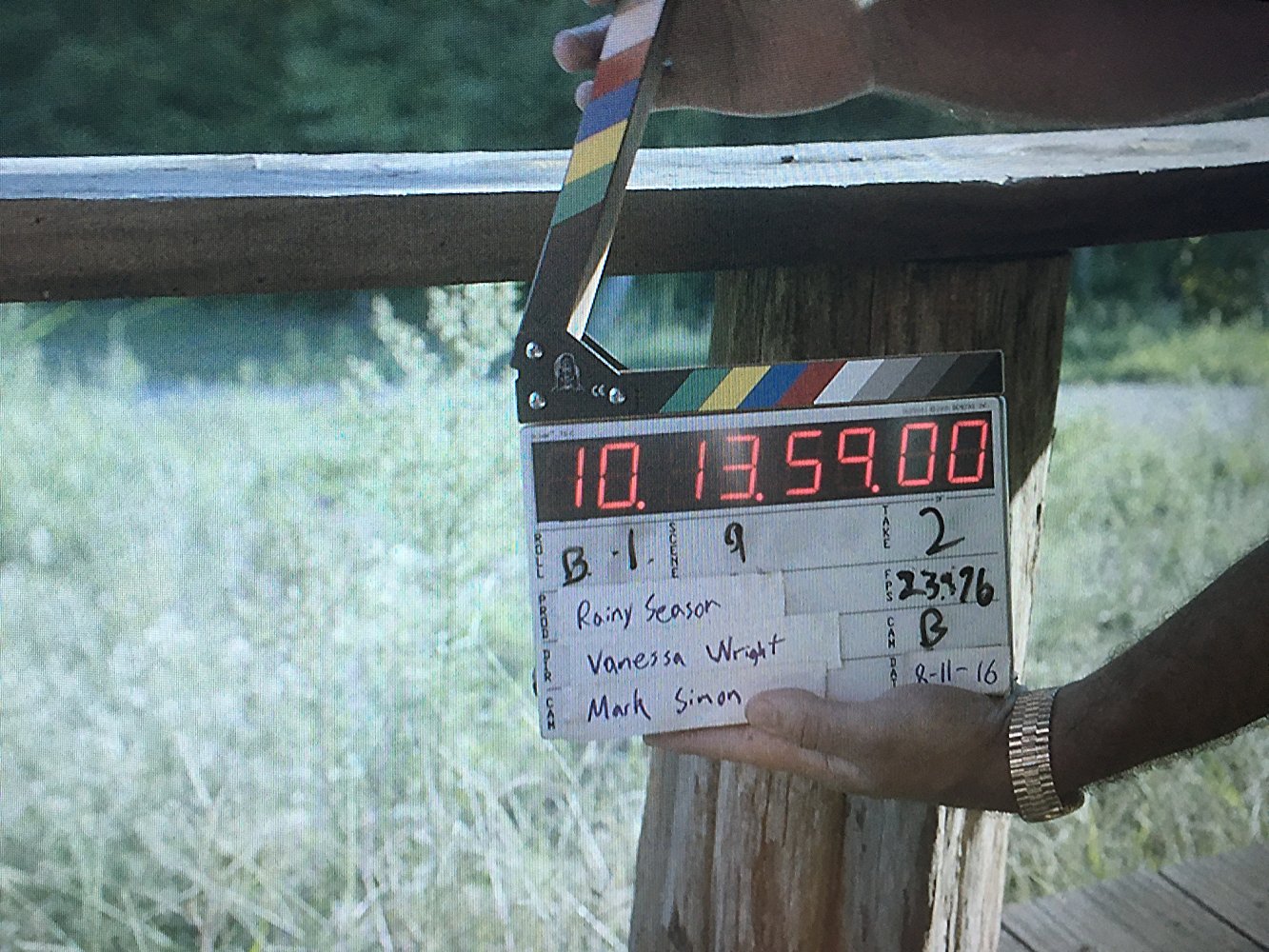 I think the future is bright for women in horror and in film. I think we are seeing more balance above the line, and there are more trail blazers now than ever before.

I just directed a PSA for the Soska twins Massive Blood Drive that they organize through Women in Horror Month. That was a really fun project to be a part of, and I am very thankful to Jen and Sylvia for inviting me to sit at the cool kids table.

I am gearing up to direct a segment for an upcoming anthology feature film that Above the Line Artistry is producing.  Above the Line is the company that I co-own with Samantha Kolesnik, another amazing woman in horror.

Samantha and I are also in the planning stages of year two of our film festival, the Women in Horror Film Festival, which will be coming back to Peachtree City, GA October 4-7, 2018.

I’m also still enjoying the festival run with the two short films I directed; “Rainy Season“, based on the story by Stephen King and “I Baked Him a Cake”.

On to the next big adventure! 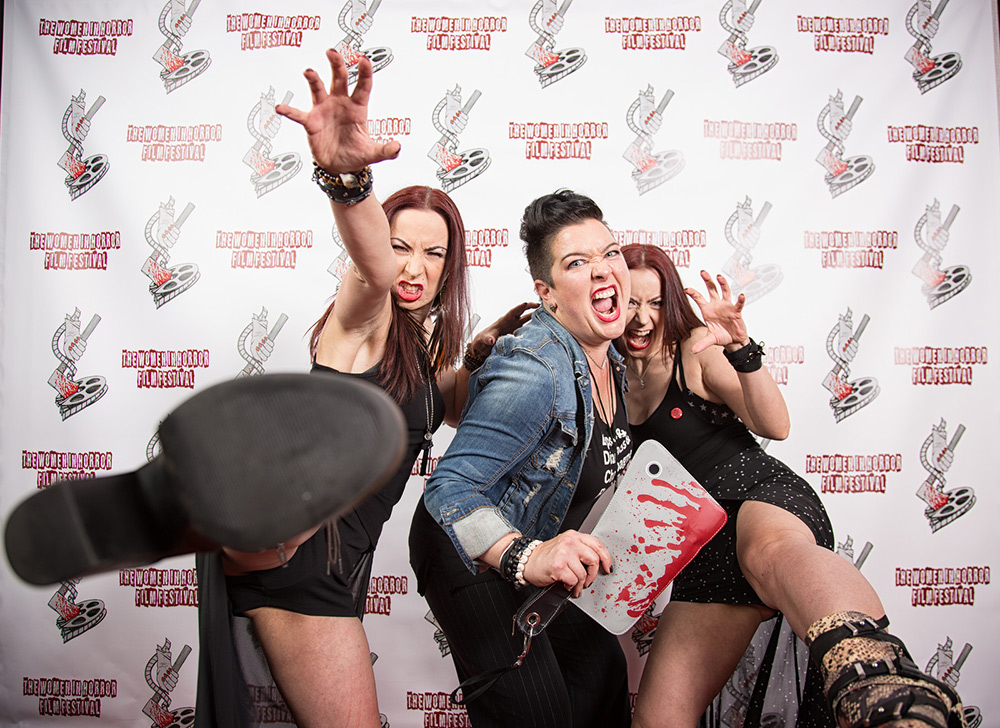