It may not have mainstream appeal, but “Soft Matter” is just unique, clever, and wonderfully weird enough to secure future cult status. When the indie sci-fi-horror-comedy Soft Matter was released in the spring of 2018, it didn’t have the most auspicious premiere. Critics that did see the feature debut of Austin-based writer/director Jim Hickcox were largely unimpressed, calling it poorly written and not particularly funny. One review even called it a chore to get through.

Even the horror press, who tend to be more enthusiastic than mainstream critics, were largely turned off by Hickcox’s effort; our own critic wrote a more charitable but still mixed review, which seemed to be one of the more generous takes out there.

As it stands now, Soft Matter has a score of 20% on Rotten Tomatoes, with only 5 critic reviews counted.

All of this would seek to mark Soft Matter as just another of the umpteen billions of low-budget indie films that get made every year, only to wither in obscurity, relegated to the streaming equivalent of the DVD bargain bin.

But plenty of films that were poorly received upon release — think Wet Hot American Summer (37% on RT), Jennifer’s Body (45%), or Drop Dead Gorgeous (46%) — have gone on to become beloved cult classics.

I’m here today to make the case that Soft Matter might have what it takes to join their ranks. 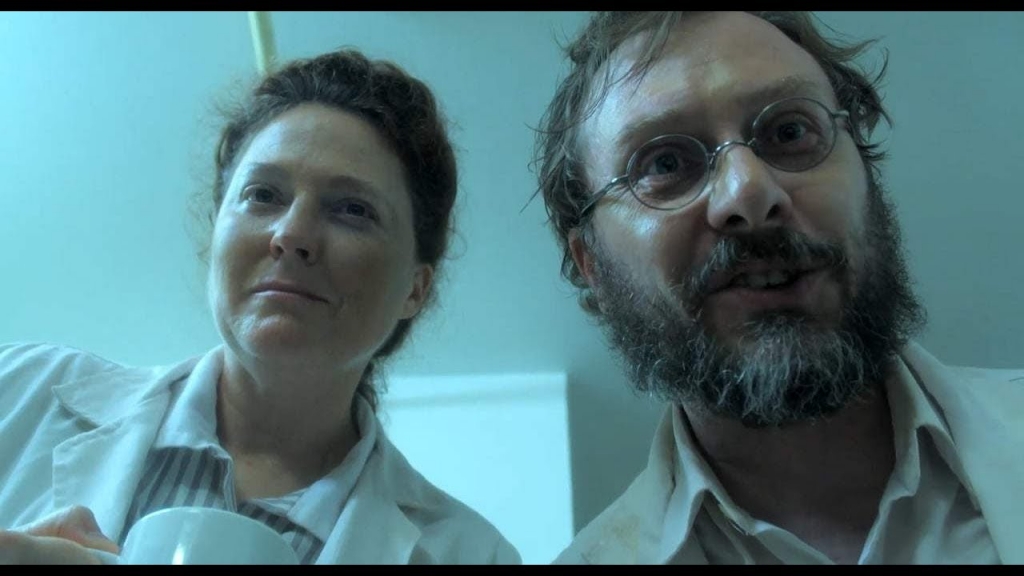 Street artist Haircut (Devyn Placide) and his friend/manager Kish (Ruby Lee Dove II, sporting a killer drawn-on handlebar mustache) are looking for a way to make an impression on the local art scene. Based on Haircut’s fascination with ghosts, the pair decide to stage a site-specific show in what they believe to be an abandoned hospital. But as they start preparing for the event, they quickly learn it isn’t as abandoned as it seems.

As it turns out, a pair of scientists named Kriegspiel (Mary Anzalone) and Grist (Hal Schneider) are using the hospital as a makeshift laboratory, searching for the key to everlasting life by splicing human DNA with that of “biologically immortal” sea creatures: lobsters, octopi, jellyfish (believe it or not, there is some science to back this up; certain species of marine animals can revert back to an earlier stage of life, effectively rendering them “immortal”).

They’re the only two scientists left standing; the rest of their team having been murdered by their monstrous test subjects.

One of them, known as Mr. Sacks (Brad Creel), is a sentient garbage bag full of slime. Another, known only as “Mystery Fish,” is an unidentifiable blob with a tail.

While going about their research, they’re visited by an ancient sea god (performed by Sam Stinson and voiced by Mykal Monroe), manifesting in a mop bucket, who warns them that eternal life is the dominion of the gods alone and to stop their quest for immortality. I bet you can guess how that turns out.

Kish and Haircut quickly run afoul of the mutant hybrids, along with a pair of their pretentious art friends who show up for the exhibition (Mark Blumberg and Catherine Grady) and are initially unclear about what is and isn’t part of the art.

Soft Matter is one of those movies that manages to turn its limitations into strengths, adopting a visual style that can be best described as “charmingly half-assed.” 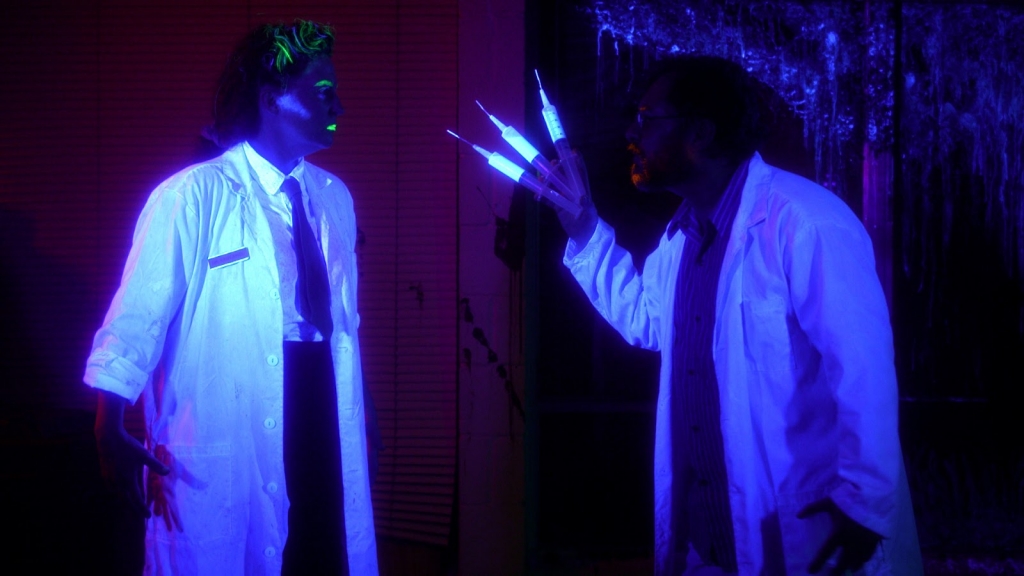 Hickcox throws pretty much everything he can think of at the wall: animated musical interludes, puppet shows, even giving Mr. Sacks an extended solo dance sequence complete with neon lights and a throbbing techno score.

The film doesn’t have the budget to pull off anything approaching realism, and so it doesn’t bother to try. Instead, it opts for an enjoyably lo-fi, handmade approach.

This sensibility, paired with the film’s dry, quirky tone, creates an experience that borders on twee at times, that oft-derided but surprisingly durable millennial style currently enjoying a resurgence on TikTok.

This might have been part of what turned people off initially, but the fact that the movie doesn’t take itself even remotely seriously just adds to the shaggy fun.

The film’s kitchen-sink approach also opens the door to a more collaborative kind of filmmaking, making space to highlight the talents of animators, songwriters, and puppeteers along with the actors.

One highly enjoyable animated musical interlude explains how the death of Haircut’s pet turtle just means that now he has a pet ghost instead. It lasts for less than a minute and is never mentioned again, which somehow just makes the whole thing even funnier.

The actors are all early in their careers, but they do a great job with the movie’s very particular tone. Dove’s Kish emerges as a tough and resourceful survivor, and Anzalone nails Kriegspiel’s megalomania and hubris.

Ultimately, I can see why Soft Matter might not be for everyone, particularly if you have a low tolerance for quirky eccentricity. 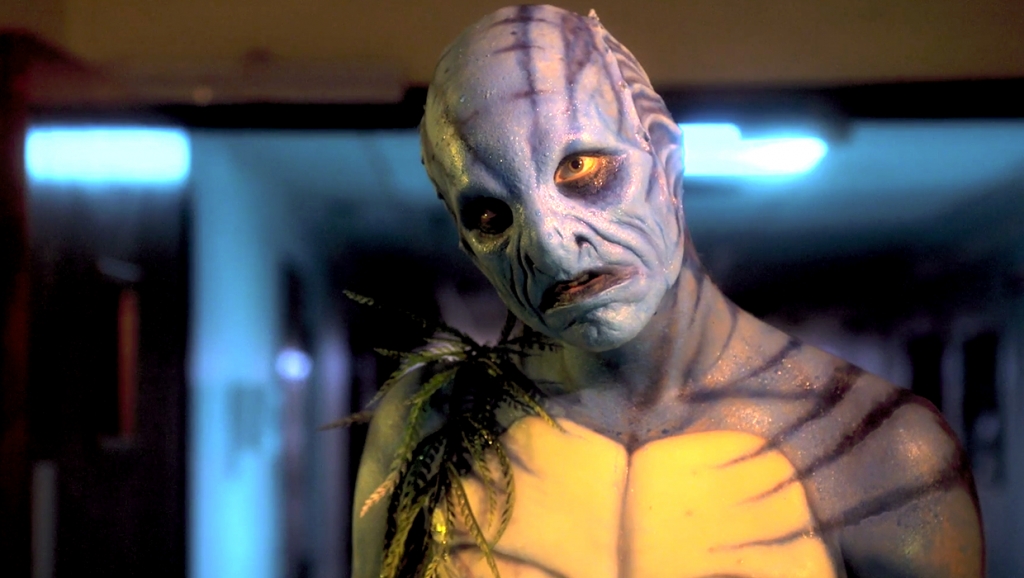 But I do think it’s much more worthwhile than its Tomatometer might suggest.

Its scruffy stoner vibes and anything-goes attitude make it stand out from the pack of underwhelming indie horrors clogging up streaming services, and it has a higher degree of imagination and visual style than most movies of its ilk.

In that way, it feels very of a piece with other Austin-based films like the work of Richard Linklater: warm, funny, frequently droll, moving at its own particular pace, far removed from the typical Hollywood ecosystem — though featuring quite a bit more goo.

At just over 70 minutes, it’s one of the few indie films that I think could stand to be a bit longer.

The climax ends up feeling a bit rushed and underwhelming, especially after all the build-up. That said, Hickcox and company clearly weren’t trying to make a conventional horror movie or even a conventional comedy for that matter.

What they did make was a singularly weird, funny, frequently charming movie that deserves to become a future midnight classic.

Hopefully, film fans with a taste for the unconventional, the unique, and the squishy will continue to discover its charms for years to come. I mean, it’s got a dancing man-shaped sentient bag of slime. What’s not to love?

Soft Matter is currently available to rent or buy on Apple TV.