Reel Review: The Heartbreak and Horror of FELT 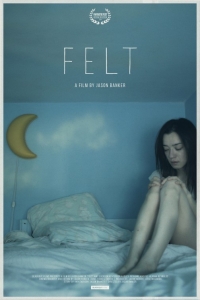 Felt, directed and written by Jason Banker with co-writer and star Amy Everson, is about a young woman struggling to cope with past sexual trauma and her perceived daily aggressions of a male-dominated society. She starts exhibiting more and more unusual behavior, escaping into a strange alternative reality, and alienating herself from friends. An unexpected relationship with a seemingly kind and loving man, appears to have the power to help her heal some of her deepest wounds. However, by opening herself up to him, she makes herself vulnerable to the most dangerous of her inner demons.

Netflix bills it as a drama and a thriller. IMDB calls it a horror/romance/thriller. Rotten Tomatoes labels it a drama/horror/romance/mystery. I’m not sure I could accurately describe Felt with any of those genre terms, and the variance in labels makes it clear how hard it really is to categorize. It’s been generally embraced as a horror film, although I must caution that it’s far from your typical horror fare.

It’s definitely dark, and there are parts that are chilling. The visuals throughout are haunting, and there’s a sense of foreboding and heavy atmospheric doom that permeates throughout. But the real horror is in the subtext. Whereas traditional horror can be a wonderful escape from real life nightmares, allowing the viewer to get lost in a fantastical world far removed from any real or present threat, Felt offers no such escape. Instead, it terrorizes the viewer with a gritty and painfully realistic portrayal of deep psychological torment, resulting from physical and sexual abuse.

This film is beautiful, disturbing, deeply unsettling, mesmerizingly strange, and unlike anything you’ve likely seen before. It’s not for everyone and, while it’s easy to defend why this is a truly special and powerful film that deserves all the acclaim it’s received, it’s not something I can easily recommend for casual viewing by genre aficionados. I think the biggest key to fully enjoying and appreciating this film is to know what to expect going in.

First, this is not a feel good movie in any sense of the word. It’s the kind of film that’s likely to stay with you long after the ending credits roll. It’s designed to make you think and, pardon the pun, to make you feel. It digs deep, and the subject matter is upsetting to be sure. Second, it’s not a traditional narrative film. It’s artsy and heavily character driven. At times, it feels almost stream of conscious. That’s important given the nature of the film, whose intent is to reveal the main character’s inner torment and her descent into psychological horror.

This movie is not so much about what actually happens to the lead, Amy (Everson), as it is about the consequences of past actions that have left her scarred and broken and unable to have a healthy relationship. This isn’t your standard “rape revenge” horror film. We never see the abuse Amy suffers, and it’s never explicitly discussed. We meet Amy after the damage, whatever it may have been, has been done.

It’s also terribly unfair to call this an anti-male film, although I’ve heard that term thrown around quite a bit online. I certainly understand where the sentiment comes from. The character Amy is clearly struggling with uncomfortable ideas about gender identity. There’s one scene where she expresses some painful thoughts about what it’s like to be a woman in a patriarchal society, revealing her own personal fears and insecurities. However, this is a reflection of her personal experiences and the pain she is suffering. There is nothing explicit or implied in this film that all men are awful. It’s clear Amy has an unhealthy perception of herself and her world as a result of her trauma. There’s certainly truth in her reality. It’s just not the entire truth.

As powerful and moving as this film is, it’s made all the more unforgettable (and heartbreaking) that it’s based on the real experiences and art of co-writer and star Amy Everson. As a result, Everson delivers a raw, unflinching, uncompromising performance as a broken girl spiraling out of control. She’s undeniably the center of the film and responsible for so much of Felt’s power and gravitas.

In a film with a different core, this could have been a romantic love story…a touching portrayal of the power of love to overcome the most insurmountable of obstacles, to repair the worst damage and erase the darkest memories. But this film is not interested in fairytales. It addresses the all too painful reality that there are some wounds that never heal, some hearts so broken that they can’t be put back together, some darkness so pervasive that no light can possibly get in. And that is the greatest horror of all.

FELT is a powerful, affecting, and haunting psychosexual thriller chronicling an abused woman’s attempt to simultaneously live with an escape from her nightmarish reality. Based on star Amy Everson’s real life experiences, this is a film that will be ‘felt’ long after the credits roll.