Fantasia Film Festival: Bleed With Me (2020)

The female-centric “Bleed With Me” is a tense, slow-burning subversion of the vampire trope, enriched with compelling characters and creeping atmosphere. 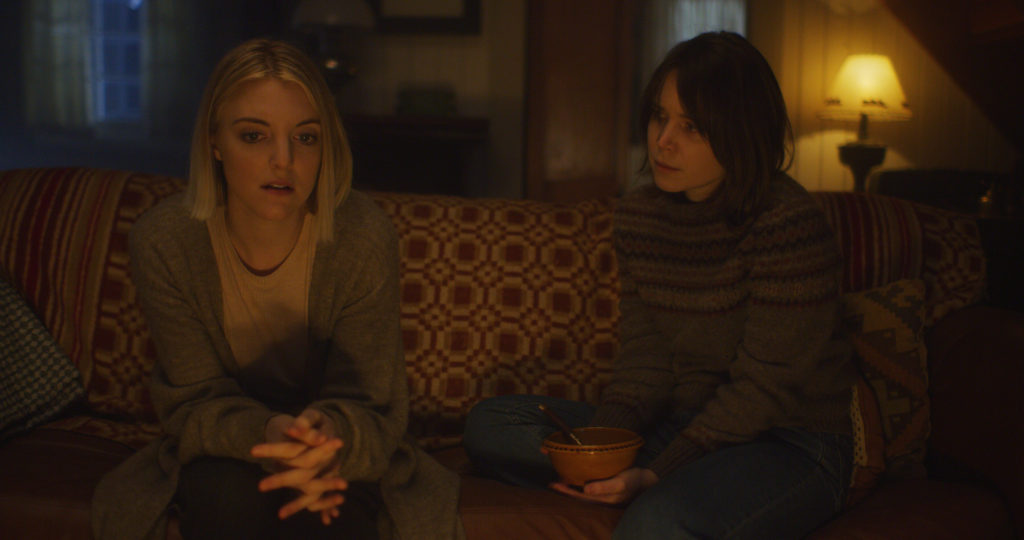 Among the films making their world premiere at this year’s virtual Fantasia International Film Festival is writer/director Amelia Moses’ feature debut Bleed With Me. With a small budget and an even smaller cast, Moses takes a minimalist approach to storytelling that becomes increasingly claustrophobic as we follow her lead character through the murky waters separating fantasy from reality.

The film centers on Rowan, an already troubled young woman, as she joins her best friend Emily and Emily’s boyfriend Brendan at a secluded cabin in the woods for a winter getaway. Rowan naturally feels like a third wheel, and it’s clear that Brendan is none too thrilled that she’s tagging along, no matter how much Emily protests otherwise.

Right away, we get the sense that Rowan doesn’t quite fit, and she awkwardly tries to navigate this uncomfortable situation. We also sense there’s something unspoken between her and Emily, something that may not be mutual and only exacerbates Rowan’s feelings of being unwanted.

After the first night, Rowan suffers from a massive hangover that she never quite recovers from. Day by day, she gets sicker, weaker, and more delirious. We follow her through a hazy labyrinth of dreams and hallucinations, unsure what is real and what isn’t. Meanwhile, Rowan becomes increasingly convinced that she isn’t sick at all, but that Emily is coming into her room at night and stealing — and drinking — her blood.

To call Bleed With Me a vampire film would conjure up imagery that is entirely absent from Moses’ narrative. 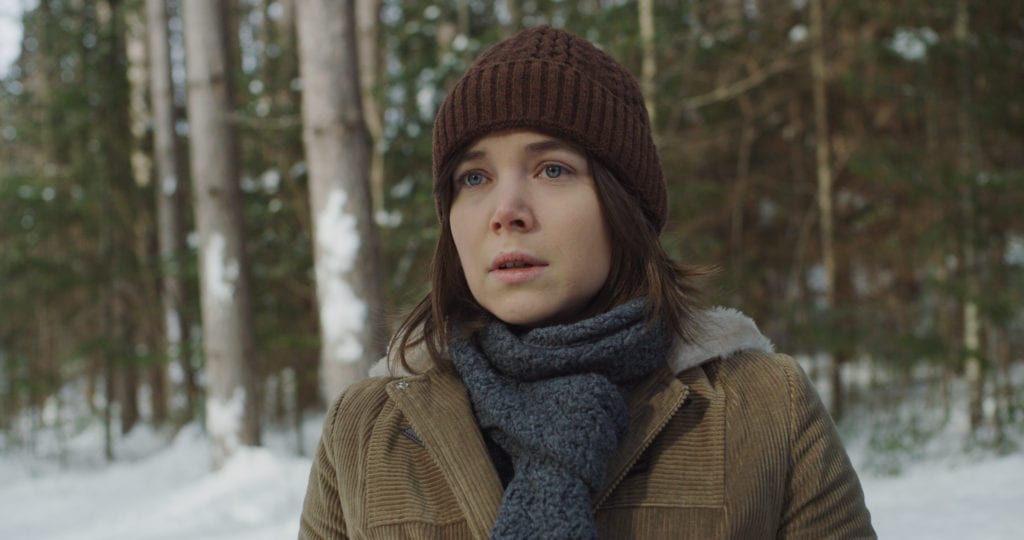 Whether Emily is a literal vampire or just an emotional vampire, or whether Rowan is simply suffering a psychotic break is intentionally vague — perhaps a bit too vague. The film’s denouement would have benefited from a little more clarity. Leaving the audience guessing is all well and good, but in this case it doesn’t feel especially satisfying.

Still, the tension that builds up to that point is meticulously crafted, creeping along at an unhurried pace as Rowan steadily unravels.

She’s an unreliable narrator, with a troubled history we’re only allowed glimpses of through half-true stories and self-inflicted scars. As viewers, we’re never sure if we can trust her, or if she can trust herself, even as she becomes convinced of Emily’s true nature. 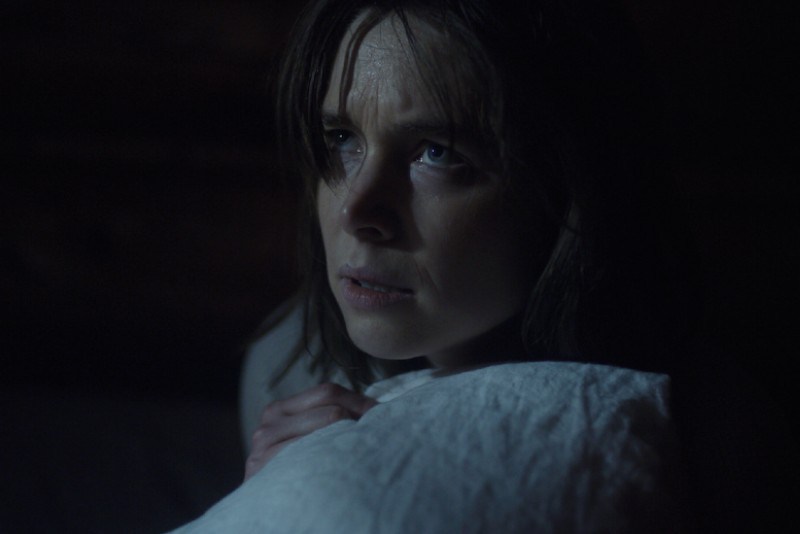 She brings a special nuance to the character, especially when it comes to Rowan’s history of self-harm. The way she’s frequently tugging at her sleeves, the flimsy excuse she makes about accidentally cutting herself on the bed frame, the instant shift in her demeanor when Emily notices her scars: these little things add up to a portrayal of a (recovering?) cutter that feels painfully real.

Opposite her is Lauren Beatty’s Emily, who is too flawlessly “put together” to be trustworthy. Her wide-eyed sweetness and perfect hair, perfect skin, perfect everything can only be a mask for the ugliest of sins. She’s an especially dangerous example of the facades we create to show the world what we want it to see, to make people think what we want them to think.

The two women work beautifully together to weave a messy web of sexual tension, longing, distrust, and codependency. 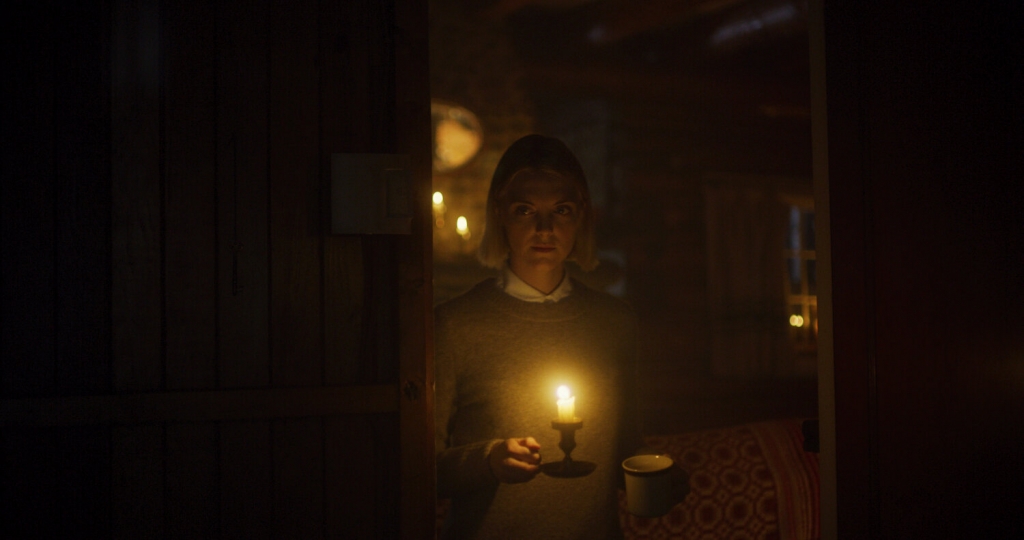 The minuscule cast (the third being Aris Tyros as Brendan), along with the isolated setting, makes the film feel uncomfortably intimate. We see parts of these people — and ourselves — that no one should ever see, and we are trapped, unable to look away.

While the payoff doesn’t entirely feel deserving of the build up, Bleed With Me is a solid debut. It’s messy and distinctly female, without the burden of subtext that implies being female is inherently messy.

Emily Moses has crafted a viscerally evocative narrative within an impressively small framework. She relies primarily on performances, emotion, and atmosphere to carry her story — and in all of those ways, she wildly succeeds.