FIVE ON IT: HALLOWEEN HORROR

Amp up your Halloween movie marathon with five lesser-known Halloween-themed horror films that ooze the mood and atmosphere of the season.

Halloween, the year’s most anticipated climax of all things creepy and macabre, punctuated by the time-honored traditions of trick-or-treating, festive costume parties, carving pumpkins, and of course, indulging in horror movie marathons. Sure, screening some of the best horror films ever made for the 31 days of horror in October ritual is great fun, but how about that extraordinary experience of watching horror movies that take place in around or on Halloween, on Halloween?

Mega horror franchises like Halloween and Night of the Demons dutifully honor the holiday, as does Michael Dougherty’s contemporary classic Trick r’ Treat (2007). In more recent years, indie Halloween-themed horror films like Hellions (2015), The Barn (2016), Hell Fest (2018), Candy Corn (2019), and Haunt (2019) — along with scores of others — have clogged Redbox kiosks and streaming services alike with promises of seasonal scares and gore.

In honor of this year’s Halloween, we’ve curated a list of five underrated and lesser-known horror films that take place around or on Halloween, all of which are readily available to stream. If you’re looking to add a few lesser-known titles to your annual Halloween horror movie marathon, then look no further.

Our list is dedicated to throwback Halloween horror movies from the 80s that have long suffered bad wraps or fell into obscurity over the years, most of which lack (but deserve) wider Blu-ray and DVD releases. Our curated list is comprised of midnight-movie picks that take place on Halloween, crammed with plenty of ghouls and monsters, satanic serial killers, incestuous hillbillies, fog-smothered cemeteries, and flesh-eating troglodytes.

The Pit (1981) is a Canuxsploitation creature feature often overlooked and derided for its low budget quality and occasional over-the-top acting, but that’s not to imply the film has nothing to offer.

An awkward (if not troubled) tween named Jamie (Sammy Snyders) is routinely bullied by his classmates and neighborhood playmates. Local grandmothers even ridicule and torment Jamie. As an outcast with potentially perverted intentions, Jamie confides in his only friends: a creepy-ass Teddy bear that talks to him, his pet reptiles, and of course, a pit full of mysterious flesh-eating beasts (troglodytes) he calls the “Trogs” or “tra-la-logs.”

Jamie’s parents, unsure how to handle their strange son, solicit help from a young and beautiful psychology student named Sandy (Jeannie Elias) to babysit Jamie when they leave town on business. Jamie develops an unhealthy obsession with Sandy and lusts after her, but his advances are quashed and Jamie broods over his inability to form reciprocating relationships.

Jamie spends more time tending to his “friends,” and feels obliged to feed the Trogs bundles of pricey raw meat until he raises suspicions from the local butcher and is caught stealing money out of Sandy’s purse to pay for the meat.

As an alternative, Teddy advises Jamie to consider feeding the Trogs human meat. Jamie obeys, luring a variety of victims – namely his tormentors and bullies – to the pit and feeds them to the Trogs, who groan in delight as they feast in a grisly, gut-munching fashion. 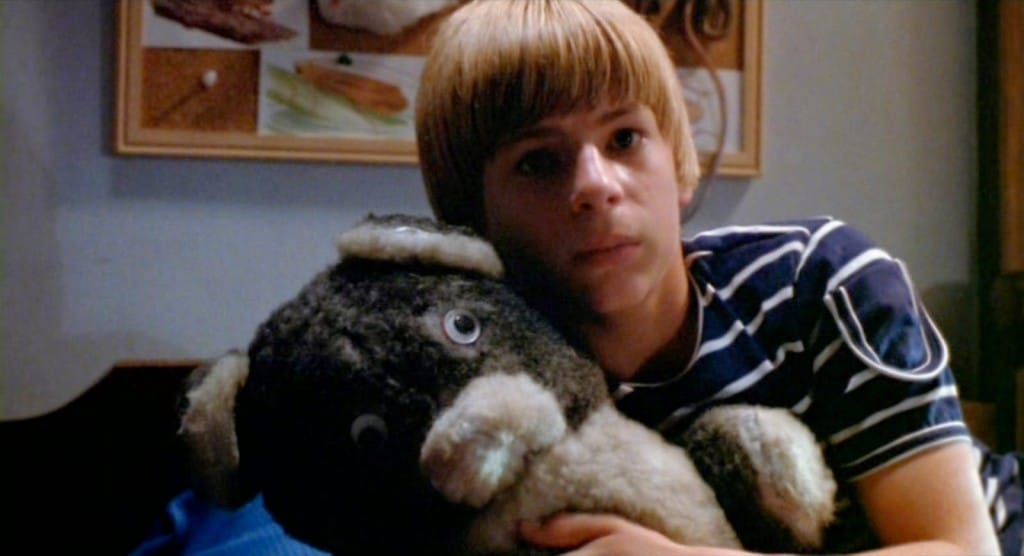 Jamie convinces a skeptical Sandy to visit the pit in an effort to prove he’s not lying about the Trogs, but once Sandy accidentally slips into the pit and is devoured, a devastated and angry Jamie frees the Trogs from the pit (via a rope ladder of sorts) and encourages the beasts to fend for themselves.

Of course, the monsters begin attacking and eating any nearby human and are eventually put down by an armed posse led by the local Sherriff. Jamie seemingly escapes justice, until the film’s final moments, when in an unexpected twist, Jamie suffers his comeuppance from an unlikely source.

The Pit marks the sole directorial credit by American-born actor Lew Lehman, who also wrote the shooting script based on a much darker original script by Ian Stuart. The story takes place during the week of Halloween and the opening scene, a flash-forward segment, occurs on Halloween night, with gaggles of trick-or-treaters frolicking about including Jamie, who’s dressed as a ghost.

The film’s visual aesthetic lies somewhere between a demented after-school special and a typical low-budget creature feature (i.e., The Boogens). The Trogs resemble werewolf-like-hedgehogs (draped in dreadlocks) with glowing eyes and sharp fangs; perhaps one of the most impressive aspects of the film, but it’s a pity that the Trogs weren’t afforded more screen time.

THE PIT is an unusual, but highly entertaining Canuxploitation horror film with obvious Halloween themes throughout, and is worthy addition to your lineup despite its uneven tone and occasional ham-fisted performances.

THE PIT is currently available to stream on Amazon Prime Video, Shudder, and Sling TV.