It may be time for crisp fall nights, but “Dragula” takes us back to the beach for nostalgia by the shore and shocking surprises. 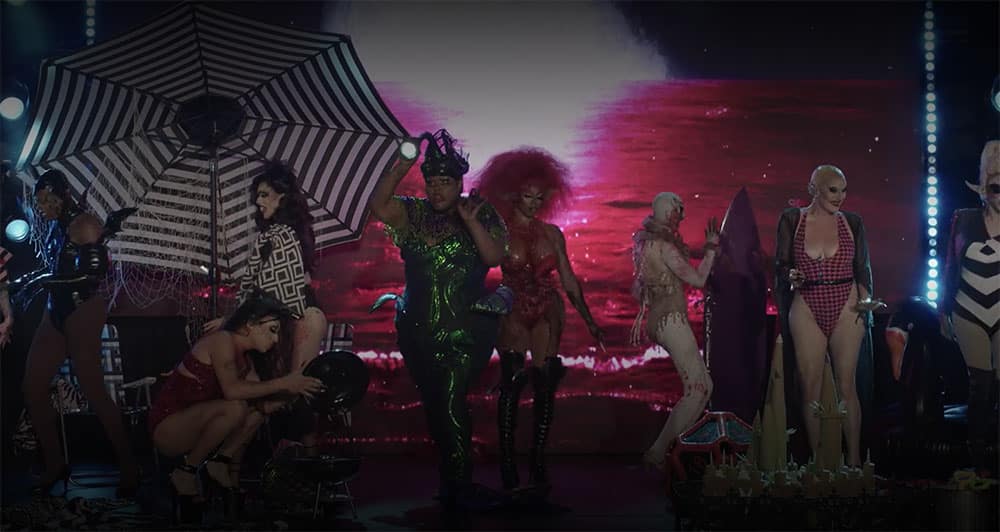 Time for a boogie at the beach! Our quintessential Boulet opening short this week showcases the two queens, and a group of vampire men, kicking up sand and getting down in the moonlight. The cute vintage bathing suits and black and white cinematography really help transport you back to the days of campy old beach movies.

Meanwhile, our monsters are tucked away in the workroom, waiting to see who will make it back from extermination. Some drama between Sigourney and Merrie Cherry swirls around the room before the queens can guess which queen survived the night.

Sigourney points out that La Zavaleta was quite loud about being the best then ended up in the extermination challenge, only for Zavaleta to strut back in. But she seems to take the callout mostly in stride and dishes about being buried alive — and that it even caused her to urinate on herself.

Before our contestants can get too cozy, they’re called down to the stage to receive a message from the Boulets.

Surprise! There will be Fright Feat this week, awarding one player quite the advantage. See, the beach party at the beginning wasn’t just a vignette; the monsters have been invited to a Nosferatu Beach Party, and the winner of the Fright Feat will get to choose who gets paired together to groove as a duo.

But wait, another surprise! 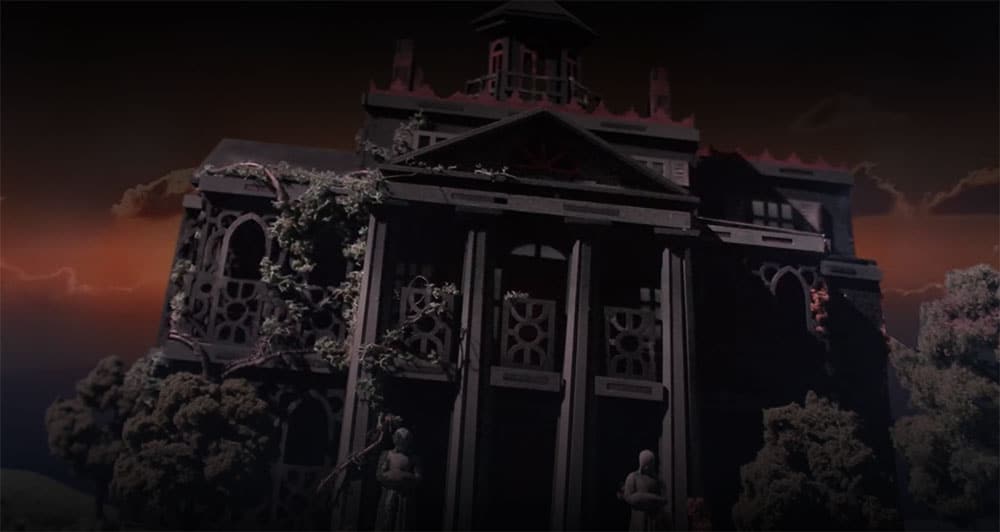 Someone else seems to be resurrected.

As a few fans had previously speculated, we finally get to welcome back season two’s Dahli. You may remember him as the terrifying (and maybe a little sexy) clown from season two’s promos. If not, you might recall that Dahli is Astrud’s drag mom.

The family reunion doesn’t last too long though, as the queens are whisked away to conquer the Fright Feat of eating a clove of garlic and downing a cup of pig’s blood. La Zavaleta, determined to bounce back from last week’s upset, destroys the competition and wins the honor of pairing everyone.

Bitter Betty teams up with Jade; Dahli and Hoso are paired; Merrie Cherry and Koco; Sigourney and Astrud; leaving Saint for La Zavaleta.

As the contestants pushed to get their looks and rhythms as cohesive as possible, there was some tension between Merrie and Koco. Koco was going to lead the dance moves but was brushed out of the way with questions and second-guessing. Eventually, Koco gave up on trying to assert herself and just let herself go with the flow.

The main stage was filled with monsters, entertaining the Boulets and our guest judges this week, Vanessa Hudgens and GG Magree. The duos bop along to “Gothic Surf-A-Rama” by Vampire Beach Babes for a really fun performance challenge.

The duo that stole the show for me was Dahli and Hoso. Hoso revealed multiple outfits that all fit the theme, while consistently pretending to have the time of her life. And Dahli, looking like a nice spooky vampire, creeped around behind the surfboards in a trench coat until he got comfortable enough to boogie. 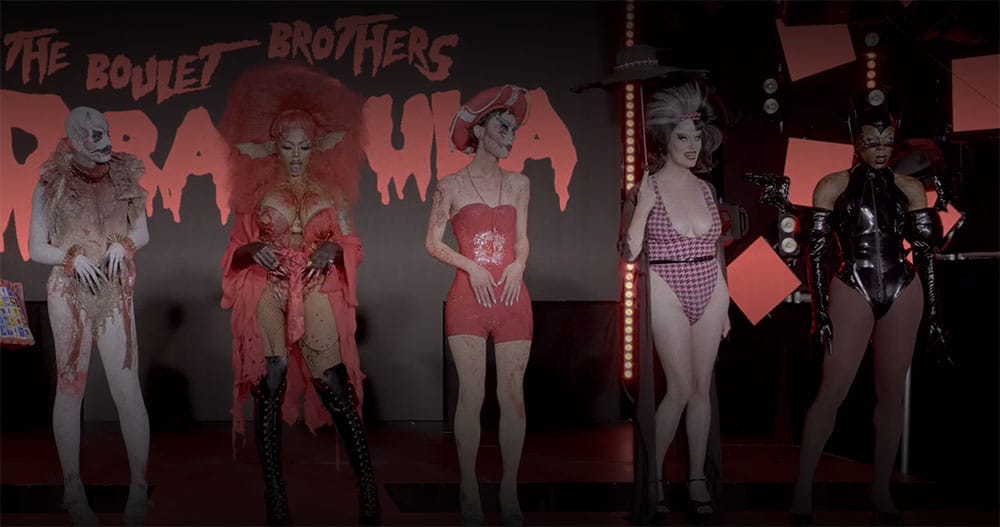 After the performance, we had a close look at how just the Boulets judge the monsters, without the other judges around.

Drac and Swan discussed at length their concern for Merrie Cherry. During the performance, the highly regarded Brooklyn queen seemed distracted and in her head, appearing visibly angry multiple times. They cited her lackluster Stay Puft performance from the week before and wondered how someone they knew was truly a star could get so frazzled.

The guest judges and contestants were then brought back out for critiques.

Safe this week was Jade, an absolutely adorable Monster High-esque vampire batgirl; Merrie, an absolutely stunning anglerfish; and Sigourney, a vamp in a cute two-piece with a sweet parasol to match — with each getting a little critique this time.

The Boulets confronted Merrie about her uninspired floor show, and she promised to do better.

Our highs for the week for La Zavaleta, who donned a few reveals herself and ended the lipsync in a gorgeous two-piece reminiscent of something Selena would have worn; Dahli, the vampire creep; Hoso, who was just there to save lives; and Saint, sporting a leather one-piece bat suit with a perfect silhouette.

Without much deliberation, Saint was declared the winner of this week. It was nice to see two returning contestants place so highly this round, and seeing La Zavaleta’s 180 this week was the cherry on top. 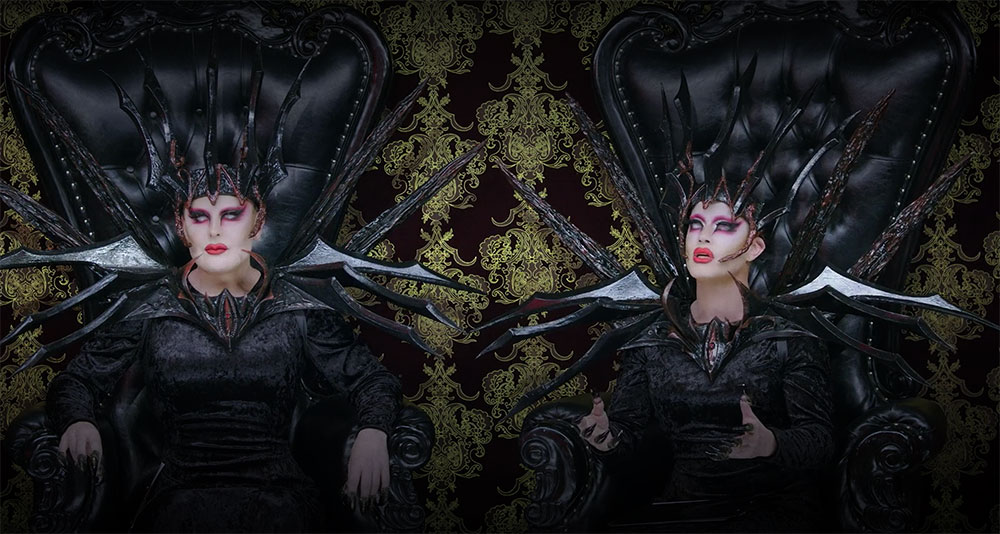 That left Koco, Astrud, and Bitter Betty as our bottom monsters this week.

Koco was told that she had some great moves, but she let Merrie outshine her by allowing herself to be tucked behind Merrie onstage for most of the performance. She also received high compliments on her cute bat ears.

Bitter Betty was read for her uncertainty, looking to Jade for guidance instead of allowing herself to dance freely. And Astrud was critiqued mostly for her outfit not coordinating well. Astrud tried to explain herself and her decisions, interrupting Dracmorda in the process.

Koco was declared safe, and Astrud and Betty were taken away for the extermination challenge: submerging their arms in tanks full of leeches.

The two managed to stick it out, allowing the little creatures to latch onto their skin and get fat with blood.

(If the thought of someone stretching out a leech attached to their skin until it releases makes you a little queasy, you might want to skip this one.)

Back to black and white, Astrud washes ashore alongside the beach party the Boulets were having earlier. Astrud struggles to pull herself from the rocks, but she isn’t quick enough. Swanthula and Dracmorda catch her easily. Drac lifts a stone from the sand and brings it down upon Astrud, crushing her head and leaving us with one less monster.