From Beyond: The Barge People

One part Lovecraftian horror, one part creature-feature slasher, “The Barge People” is a mixed bag that starts slow but ends strong.

The Barge People (2018), starring Kate Davies-Speak, Mark McKirdy, Natalie Martins, and Matt Swales, is a film about a group of vacationers looking for a relaxing escape aboard one of Britain’s canal barges. Little do they know that freakish mutants lurk in the water, waiting to feed.

It’s an interesting premise for sure, one that captured my attention as a fan of all things fishy.  However, despite doing quite a bit right, director Charles Steed and team couldn’t really hold my attention.

The Barge People starts off strong, with an in media res (in the midst of things) scene that follows a frightened Kate (Kate Davies-Speak) making her way through a subterranean lair. Hiding from what appears to be a malformed, grotesque mole-man, we watch as Kate tries to escape, only to be caught by the monsters!

This scene does a lot of good for this sort of film.

First, it acts as a teaser, making the audience wonder what’s led up to this point. Second, it provides a look into some of the more impressive aspects of your film: the tense music, the dark, oppressive lighting, the immaculate makeup of the monster.

But, there’s a problem: this scene is not the opener. Instead, this engaging scene is bookended by a faux-documentary opener and a non-plot related credit roll scene.

If you’ve read my Banshee Chapter (2013) review, you may already be thinking of what my issue was with this film: tone. Already within the first three minutes of the film, we’re very abruptly treated to three completely different scenes. But, tone isn’t my problem with The Barge People, at least not totally. These three scenes instead illustrate my real complaint: that it’s all just filler.

For everything that this film does right, and it definitely gets a lot right, it’s all brought down by The Barge People’s unfortunately meandering and drawn-out plot.

Structurally, The Barge People has trouble finding its transition from first to second act. Most times, a film presents its conflict within the first quarter of the runtime, taking us from act one to act two. The Barge People’s conflict, however, arrives halfway through the film. What makes up everything beforehand is our four protagonists basically just floating on a barge.

Amidst all this, there is a scene that features the titular Barge People, where an eager environmental conservationist is murdered via cleaver by a fish-faced mutant, but it doesn’t achieve much at all. Despite being expertly shot, lit, and acted, the scene left me asking, “What’s the point of all this?” It’s obvious that the ‘point’ was to build tension and intrigue about the Barge People, but I honestly just found it boring. Add in the relationship drama and exposition, and my interest was waining around the forty minute mark.

Then the Barge People arrived.

As soon as our strange, monstrous antagonists made their full entrance, the film immediately picked up the pace.

Quickly, we went from a tension-building slog to a high-octane, yet campy, survival slasher movie!

The second half is definitely where The Barge People shines. I’m sure that audiences will be thoroughly entertained by the amount of strangeness The Barge People’s second half has to offer. It’s just a shame that they’ll need to wait forty or so minutes to get there.

While I did have issues connecting with the plot, The Barge People excels just about everywhere else.

The Barge People does especially well with its technical prose.

The practical makeup was definitely a highly, impressing me quite a bit! We’re given a few very uniquely designed monsters in this film, each of which is totally articulated. But, I found myself especially fascinated the art design, of all things, specifically the set work and dressing of the creatures subterranean lair, mentioned before.

If I had one gripe about the final technical work, I’d say I found myself finding issues with the post-audio mixing. Some sound effects just didn’t sound natural, while other sections of the audio sounded either too quiet or too loud. However, this is a minor problem that really didn’t effect my viewings of The Barge People, especially when I contrasted it with the amazing scoring of Sam Benjafield.

While many, including myself, may find the ’80’s aesthetic’ played out, Banjafield’s homage score was proper amounts tasteful and catchy. His work did an amazing job at making stand-out scenes all the more entertaining! 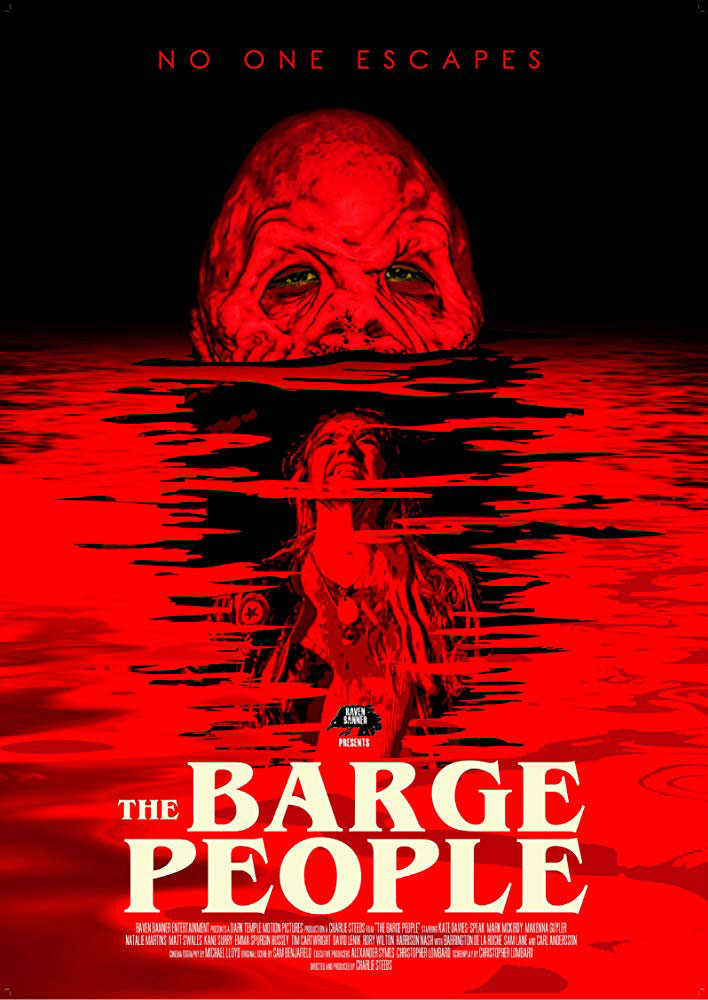 All in all, The Barge People is a film that I think some may really enjoy.

However, many will find themselves struggling to get through that first forty minutes before the real action starts.

That doesn’t mean this is a bad movie though, and it certainly shouldn’t be treated as such. Instead, it should be seen as a step in the right direction for Charles Steed and team.

I, personally, can’t wait to see what they come up with next!

This review is from the film’s screening at Horror on Sea Film Festival on January 19, 2020. The film has been picked up for distribution by Raven Banner and is awaiting release.