As we enter the highly anticipated award season, on the heels of the recent announcement of the 88th Academy Award nominees, horror fans are reminded once again of the undeniable reality that genre films get little to no respect or acknowledgement in mainstream Hollywood. The Academy is notorious for its genre bias, especially when it comes to the selection of Best Picture nominees and winners. The Exorcist (1973) was the only true horror film to be nominated for Best Picture in Academy Award history – until 1991. Only one true ‘horror’ film has won Best Picture, The Silence of the Lambs (1991), although it has also been classified as a thriller. 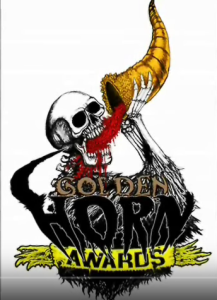 Until now, there has been a significant void in any type of official recognition for the horror genre and the talented men and women who work in the genre. That’s why I was so excited to discover the Golden Horn Awards, now in its 5th year, hosted by the talented Horror’s Ball on his YouTube channel. This is an award show, I believe one of the first and only of its kind, dedicated exclusively to horror.

In a year that has been widely hailed as one of the genre’s best—maybe, as Horror’s Ball asserts, the best year for horror since 1985—it seems more important than ever to recognize the talent, creativity, and innovativeness that have elevated the genre and given horror fans such exceptional and diverse entertainment. Many of the horror films that have generated tremendous buzz and stood out among all the best material have been made on shoestring budgets, making them all the more impressive and worthy of recognition for their ability to rival and very often surpass what has been accomplished by big budget horror and even non-genre films.

The Golden Horn Awards recognizes excellence in 19 different categories. The most recognized traditional categories are, of course, included in an effort to celebrate the talent that typically gets snubbed by the Academy and other prominent awards. Awards are given for Best Actor, Best Actress, Best Director, Best Cinematographer, Best Score, Best Foreign Film, and Best Film.

Previous winners in the category for Best Film are Hobo With a Shotgun (2011), Livide (2012), Antiviral (2013), and Pieces of Talent (2014). You’ll have to watch this year’s show for yourself to see who walks away with the coveted recognition this year, but I promise you won’t be disappointed.

The Golden Horns also include some great genre-specific recognition for categories such as Best Indie, Best Low Budget, Best Gore/Makeup, Best Monster/Creature Feature, and the Scariest/Creepiest Film. This year also marked the addition of a new category, my personal favorite, Best Slasher. In addition, there are even awards to recognize some of the year’s best DVD/Blu Ray releases, as well as some fun extras.

Personally, I was impressed by all the nominees and award winners. Many of my favorites were well represented. I was also shocked to discover how many of the nominated, and even award-winning, films I’ve yet to see…some that weren’t even on my radar. I feel a bit embarrassed by this fact, but I’m grateful to Horror’s Ball for helping me discover so many new hidden horror gems.

I definitely have a firm goal this year to have watched all the 6th Annual Golden Horn Award nominated films before the 2016 winners are announced. We can only hope 2016 is as rich and rewarding a year for horror as 2015 was.