WHAT HAPPENED THIS WEEK?
Since the election, when President-Elect Joe Biden won in a decisive and historic victory, President Trump has refused to concede. His lawyers have been alleging in court (wholly without evidence) that Democrats stole the presidential election for Joe Biden with a combination of fraudulent mail-in ballots and voting machines rigged by Venezuela’s deceased left-wing populist autocrat Hugo Chavez. A new YouGov poll of 1,500 registered voters revealed that 88 percent of Republicans think Donald Trump was the rightful winner of the 2020 election.

Enter the 2008 German film based on true events, The Wave (Die Welle).

“People who felt left out suddenly are in control, and it feels good. Can it happen again? I say, ‘It’s happening.'” – Ron Jones

The Third Wave began as an experiment in the classroom of first-year history teacher Ron Jones to simulate fascism in World War II and demonstrate to skeptical students how the Nazi Party rose to power. The experiment took place at Cubberley High School in Palo Alto, California, during one week in 1967. Jones, unable to explain to his students why the German citizens (particularly non-Nazis) allowed the Nazi Party to exterminate millions of Jews and other so-called ‘undesirables’, decided to show them instead. 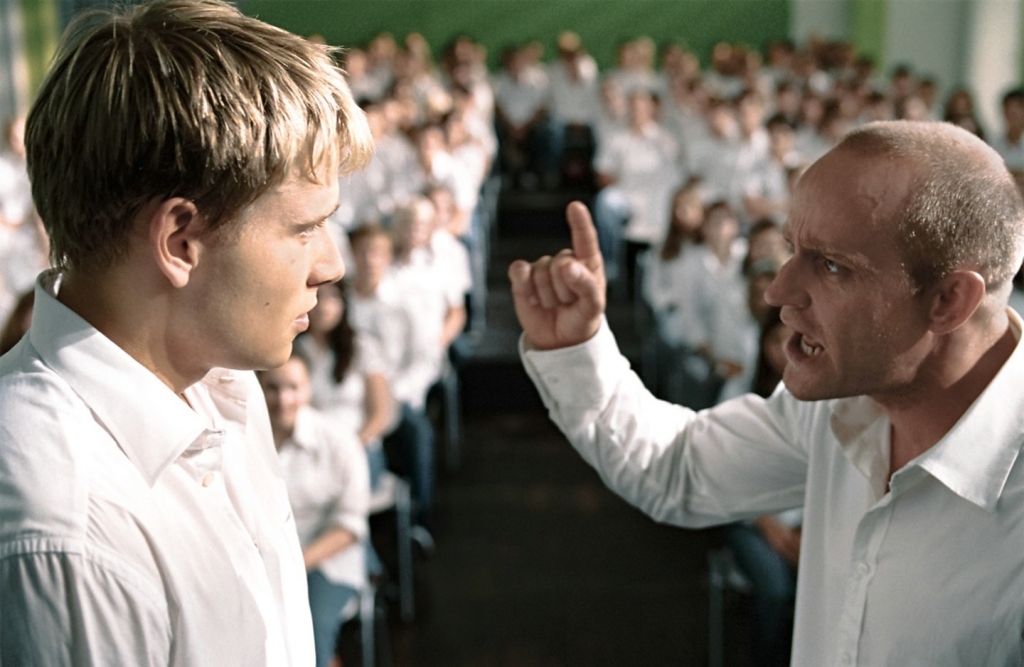 Jones started with simple things like classroom discipline, melding his history class into a group with a supreme sense of purpose. He posted student guards at the classroom door, ordered students to march into class and sit at attention with their hands clasped behind them. He taught them to salute each other with a curved hand similar to the salute used during the Nazi regime. To avoid rebellion, he made it illegal for any party members to congregate in groups larger than three outside of class — a rule that had to be followed 24/7. He used students as secret police and held public trials to banish “resistors” to the library with a reduced grade.

Over five days, the movement took on a life of its own as it spread from the 30 sophomores in Jones’ homeroom class to more than 200 students from all three high schools in the Palo Alto school district; all eager to pledge allegiance to a social movement that promised acceptance and reward to those who obediently followed its rigid rules.

At the time, no one realized the experiment would become a significant catalyst for much broader discussions about bullying, peer pressure, fascism and psychology. In more than 32 countries, study of the Third Wave has become part of the classroom curriculum, including in Israel and Germany, where the story is a high school reading requirement. The story has inspired multiple stage productions, a musical, movies and books.

In 2008, German director Dennis Gansel attempted to reconcile his country’s fascist past with his feature-length adaptation of the story. 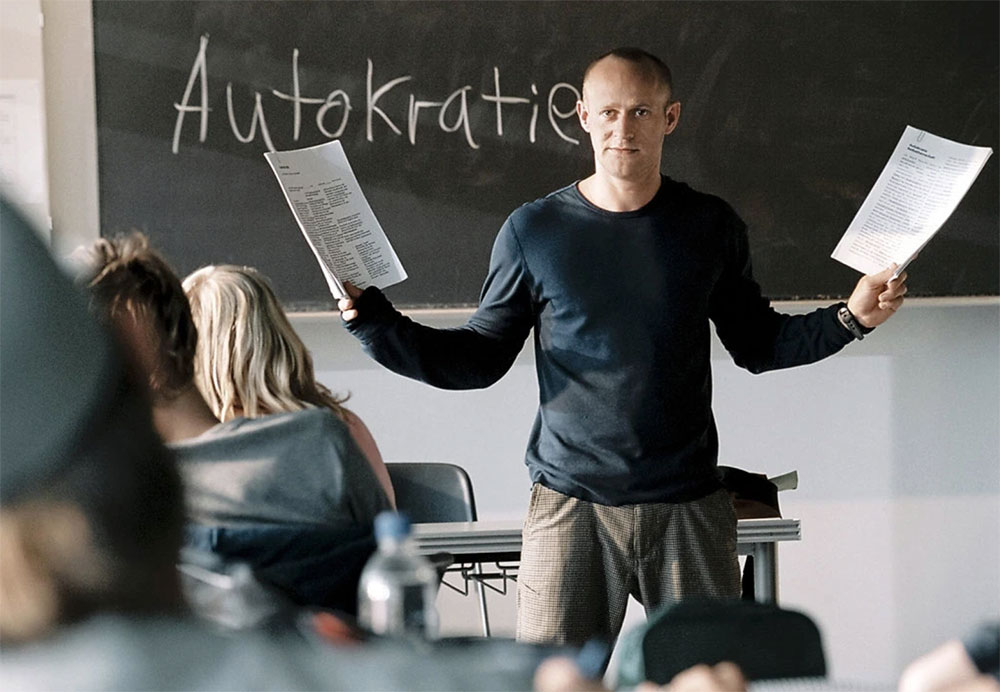 Rainer Wenger (Jürgen Vogel) is a popular teacher at an affluent high school in Germany. A handsome radical in his early forties, he wears a Ramones T-shirt and lets his students call him by his first name. It’s project week at the school, and Rainer desperately wants to discuss Anarchy. But a stuffy senior colleague refuses to relinquish the assignment, forcing Rainer to discuss Autocracy instead. When his students balk at having to talk about Nazi German yet again, Rainer comes up with a role-playing experiment in order to better explain how totalitarian governments work.

It begins innocently enough. The class agrees to address Rainer as Herr Wenger, obey his orders, and treat him as their leader. First, he introduces calisthenics, designed to get the blood flowing and keep them sharp and clear-headed. They march in place together to show unity. They agree to wear a uniform for the week (white shirt and jeans), a symbol of community. A talented artist in the class creates a logo for their new group, christened THE WAVE, and they even come up with a special salute to express solidarity.

To Rainer’s surprise, his privileged, disaffected students — the familiar mix of jocks, outcasts, drama kids, goths, and overachievers — respond to his “unity is power” message with disconcerting enthusiasm. 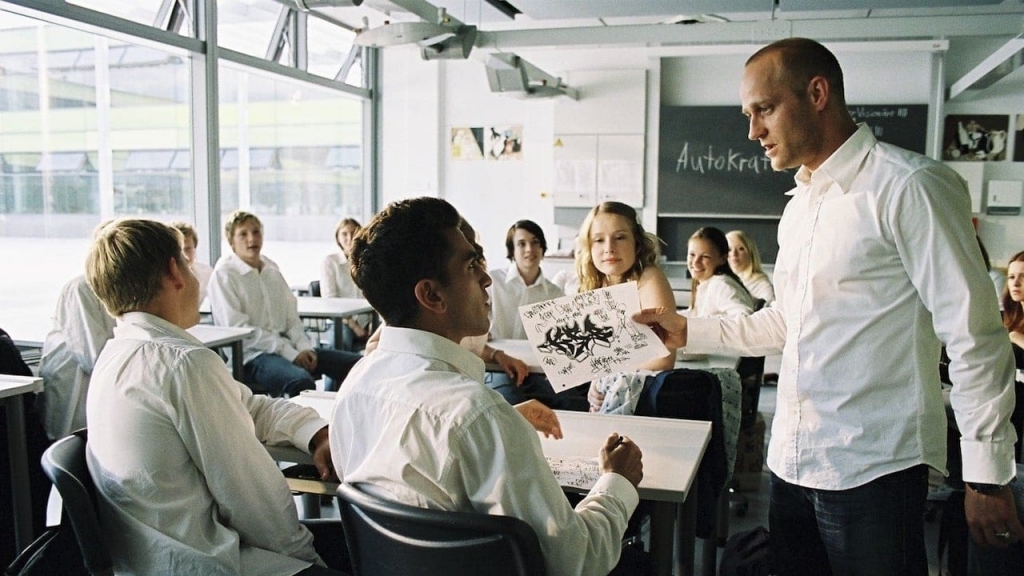 It takes shockingly little time for hive mind to set in with virulence. What began with harmless ideals like discipline and community builds into a real movement, and by the third day, the students being excluding and persecuting dissidents and non-conformists.

As Rainer’s influence over his students grows, he begins to enjoy his newfound position of unwavering respect and total obedience. Meanwhile, his reputation among his colleagues and his relationship with his wife, a fellow teacher, begins to crumble. It’s never quite clear if Wenger completely understands what he’s doing with his disciples, or how the experiment is affecting him personally. What is clear, however, is his students’ longing to be led — and Wenger’s longing to lead.

The conflict comes to a head during a violent eruption at a water polo game, where Wenger is also the team’s coach. While watching, it’s hard not to be reminded of the 1936 Olympic Games, used by Nazi Germany for propaganda purposes. More precisely, the scene echoes the infamous “Blood in the Water” match between the USSR and Hungary in 1956, which took place against the backdrop of the 1956 Hungarian Revolution.

Following the incident, Wenger decides to break off the experiment. But it’s too late. THE WAVE is out of control. 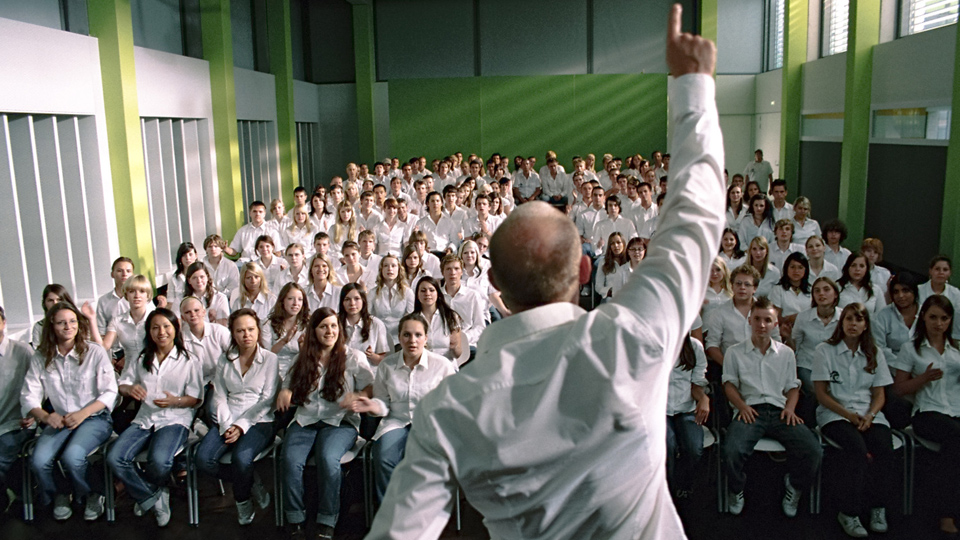 The Wave was directed and co-scripted by Dennis Gansel, whose grandfather was an officer in the Third Reich. As much as it’s a dramatization of the infamous teaching experiment by Ron Jones (who served as a consultant on the film), it’s also Gansel’s personal attempt to understand the “why” and the “how” behind his country’s horrific history. Less than 10% of the Germans actually belonged to the Nazi Party. So how could so many unwitting participants sit back and watch the Nazis slaughter millions?

By transplanting the drama to modern-day Germany, Gansel drives the point home that history is never really in our rearview mirror. Humanity had not evolved much in the three decades since the Holocaust when Ron Jones first conducted his experiment in 1967. And it still hadn’t evolved 70 years later when Gansel told his version of the Third Wave.

Now, eight decades removed from those unconscionable crimes against humanity, are we any smarter or better than those who stood by and watched it all happen? If the current socio-political climate is any indication, the answer is a depressing and resounding ‘no’.

The scariest part of The Wave is how innocently the experiment began. The ideals first embraced by the students seemed noble on the surface.

What’s wrong with respect, working together as a community, abolishing cliques and embracing unity? The students were offered the opportunity to be a part of something, to feel empowered and included. But this sense of belonging comes with a much darker flip side. It makes it easier to dehumanize anyone seen as “other”, and the need for discipline leads to blind obedience. We stop feeling comfortable questioning authority and start marching in step, even when we’re being led off a cliff.

When Wenger finally reveals the truth behind the experiment, his devastated devotees plead to keep it going. While they finally understood how they took things too far, they insisted there was so much good that came out of it. Wenger rightfully argues that the bad is too baked in. You can’t strip the fascism out of the authoritarian regime.

The melodramatic ending, where Wenger disbands THE WAVE under the guise of an organization rally, is made all the more chilling as his climactic speech is delivered in German. Before the reveal, Wenger whips his followers into a frenzy by calling for total domination and control. As he uses his bully pulpit to incite passionate allegiance, it’s impossible not to hear Hitler’s voice during the Reichstag speech (January 30, 1939), when he told the German public and the world that the outbreak of war would mean the end of European Jewry — a time that marked the transition in Nazi racial antisemitism toward genocide. 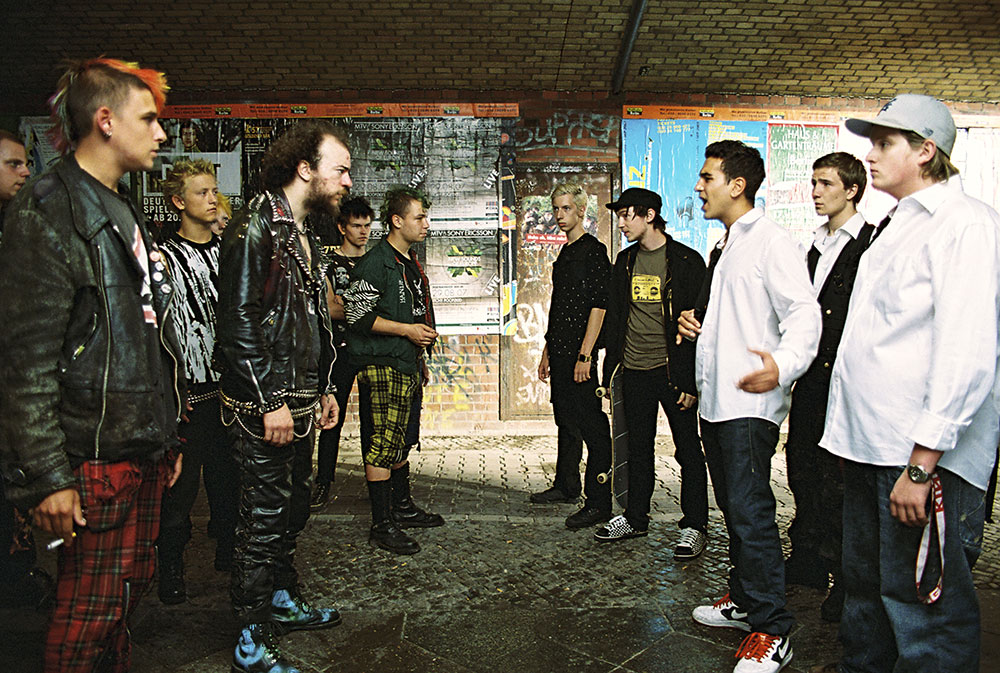 Many become understandably uncomfortable with any attempt to draw parallels from the rise of Nazi Germany to modern day politics. We all believe that a monstrous event like the Holocaust could never happen again. We’d never let it happen again. We demonize those involved, not just the active participants but also the silent bystanders. By stripping away the humanity of an entire country, we deny the truth about how ordinary people became complicit in unspeakable evil.

But as Charles F. Glassman points out, it’s not that simple.

“Be aware that the overwhelming majority of German people in the 1930s and 1940s were very much like you and me — decent people wanting the best for their friends and family. Have we learned from their lesson? The influence of group-think can manipulate the masses into justifying horrific actions.”