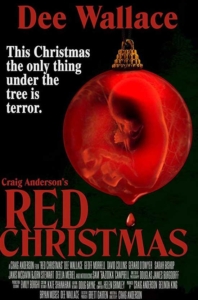 For those of us horror fans who dread seeing those wonderful ghosts and goblins replaced with twinkling lights and reindeers, there’s something so satisfying about movies that take a typically festive and cheerful time of year and cast a very dark shadow over it — turning a time of peace and love into a bloody and brutal spectacle.

Red Christmas is the newest entry in a long line of twisted holiday horror. But far from being content to simply fit in with the flock of festive slashers, the film easily distinguishes itself with a uniquely twisted storyline, great cinematography, and a compelling cast of characters. 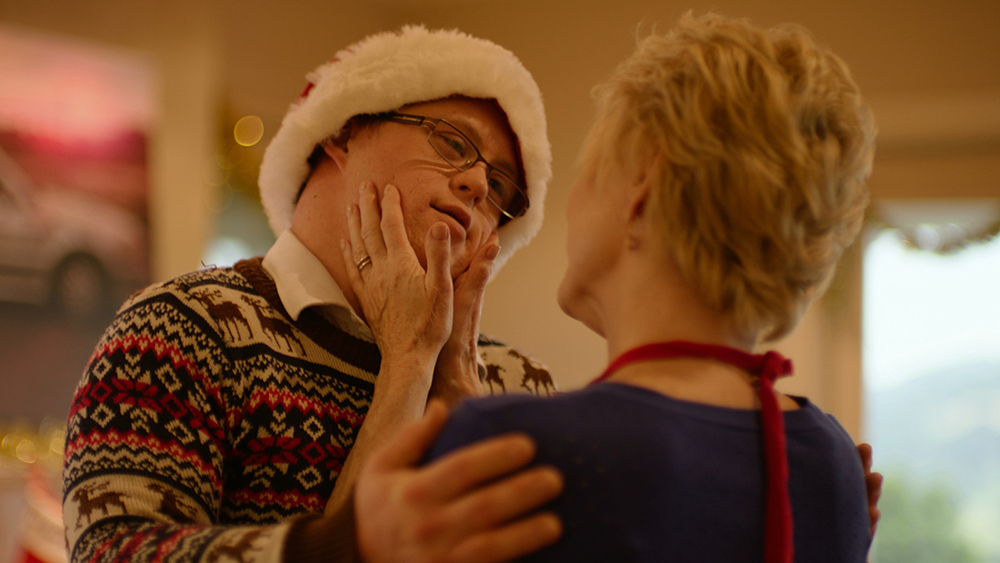 The film boldly tackles taboo issues and puts controversial subject matter at the core of its horror and emotional drama. Most impressively, it breaks genre conventions by putting a character with Down Syndrome (wonderfully portrayed by Gerard Odwye) in a meaty and pivotal role. Writer/Director Craig Anderson further pushes the envelope by making Down Syndrome an integral part of the plot.

Anderson also scores major points by putting a woman — over the age of 65 — in a strong and kick ass lead.

Dee Wallace, an undisputed icon of horror, proves she’s still just as bad ass as ever. Whereas, horror heavyweights of her status are often confined to brief cameos, she carries the weight of the film on her extremely capable shoulders — delivering a powerhouse, emotionally-charged performance. 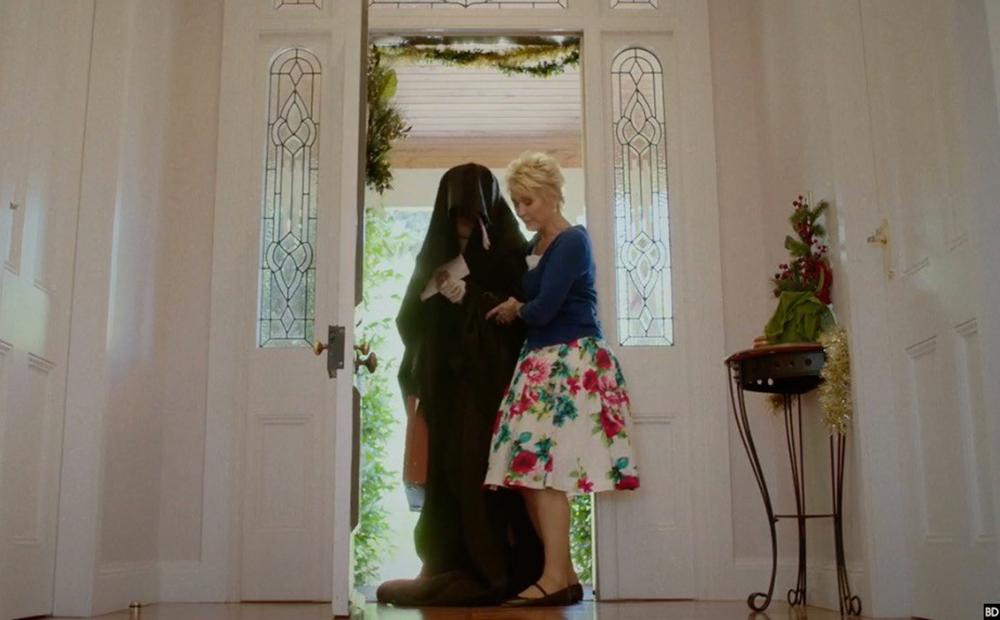 Heartbreakingly convincing as a grieving mother and widow, and strong but nurturing matriarch, Wallace’s sincere performance helps anchor an otherwise entirely implausible film with a weight of believability.

It’s pretty standard protocol for horror films to take an innocent gathering of family and friends over the holidays and then quite literally kill the joyful spirit by introducing a mass murdering maniac. But Red Christmas takes the sacrilege to a new level by twisting the celebration of baby Jesus into a bloodbath “born” from abortion.

The film doesn’t care who it offends, and I honestly love it for that. 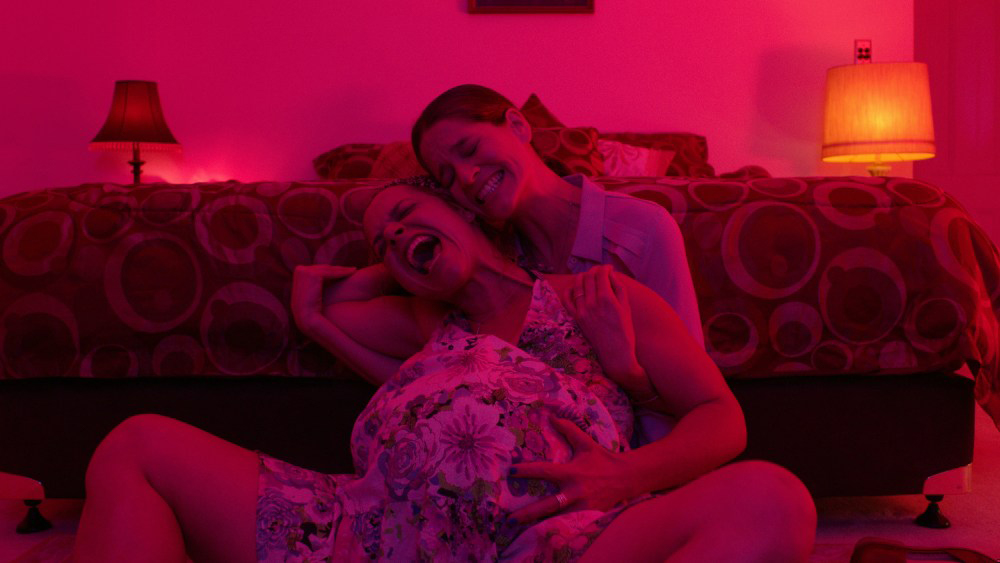 But there’s much more here than just shlock and shock value. While it certainly succeeds as a delightfully gory and fun slasher, there’s also a good deal of psychological horror at play that gives this film an added depth.

Wallace brilliantly conveys the agony of her tortured past and the horror of harboring a secret shame for years, forced to hide her pain from her family and those she loves the most. Plagued by regret and sorrow, her suffering is magnified when her past choices come back to haunt her.

Admittedly, only an actor of Wallace’s caliber could make this rather bizarre material work so well. She’s truly a force to be reckoned with, and this movie is worth seeing for her performance alone. 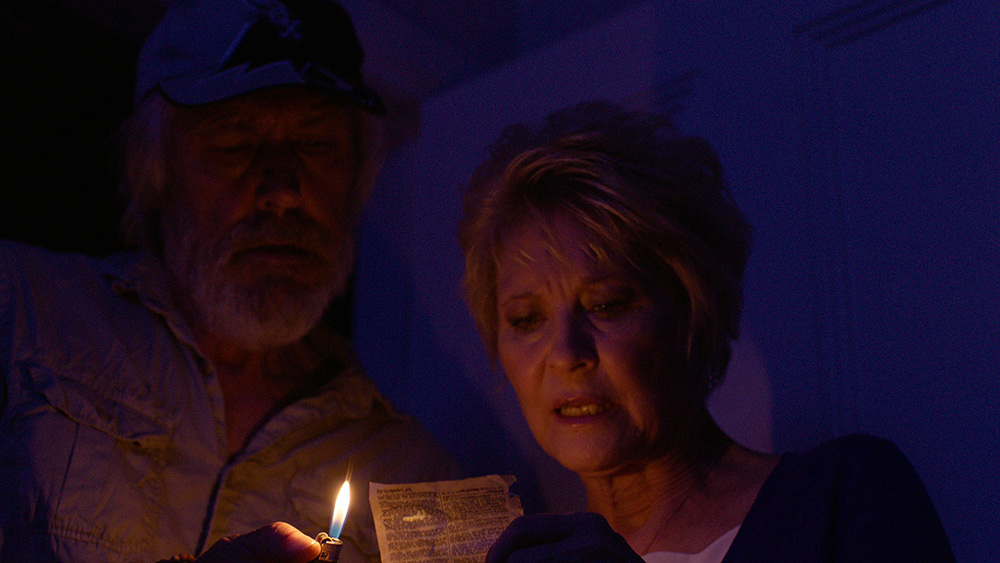 The body count is high, and many of the death scenes are quite satisfying.  We’re given a brutal and sadistic killer, with no qualms about butchering an entire family — as well as the requisite ineffective police officer, who suffers one of the film’s most gruesome and memorable deaths. In spite of his merciless vengeance, however, the killer in this film remains strangely sympathetic.

Beautifully shot by Douglas James Burgdorff, with a great use of color that turns the traditionally festive red and green Christmas palette into a nightmarish house of horrors, Red Christmas looks fantastic — especially on Blu-ray.

If you’re looking for something to get you in the frightfully festive spirit, I highly recommend you give Red Christmas a watch. For me, this is definitely a new holiday horror classic.

Special features on the discs are:

Red Christmas is now available on bluray per Artsploitation Films