Faith Beckett is about to learn there is no solution to sadness at the edge of a blade.

At Thanksgiving, we told you about a new short from a filmmaker who is quickly becoming one of our favorites, Dee McCullay. The short, called BORDER PATROL, offered a unique take on the zombie sub-genre and was the second short from McCullay. It followed his popular short Halloween creature feature, FALLACIOUS.

Now, McCullay ends the year with SCARS, his third short and easily the darkest of the three.

Combining elements of the supernatural with psychological horror, SCARS tells the story of a broken young woman named Faith Beckett (played convincingly by Kate Sutton) who is down on her luck and feeling isolated from the world. She begins the short in the hospital, waiting for a ride that never shows. We later learn she was being treated for self-inflicted cutting wounds. Cutting, it seems, is the girl’s way of dealing with pain and sadness. 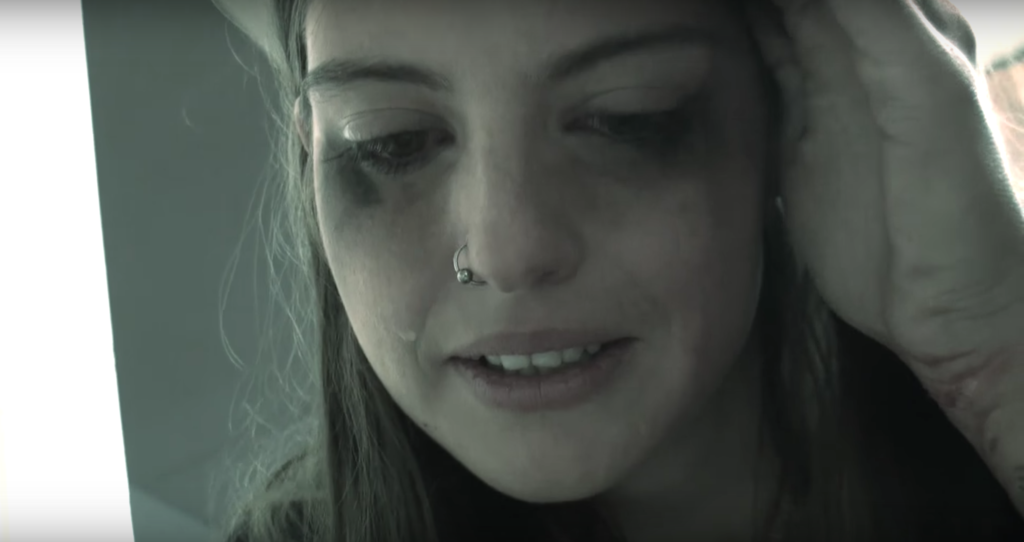 Broke, alone and disillusioned, Faith must battle her own inner demons in a very real and terrifying way. She will either discover her hidden strength and begin to heal, or she will give in to the darkness that threatens to consume her.

At just under seven minutes, McCullay once again manages to achieve quite a bit in the short running time. In speaking with Dee, he mentioned that the short contained all first-time actors, some of which were taken from the crew as other actors backed out at the last minute. It’s impressive what the up-and-coming filmmaker was able to do given these challenges.

I always find that the scariest monsters are the ones that live in our own minds, and this film capitalizes on that idea by manifesting Faith’s darkest fears and insecurities in a really clever and quite scary way. McCullay excels at making the most of his micro film budgets, treating viewers to solid special effects. At one point, this short reminded me a bit of ‘Hellraiser’, with its moody atmosphere and almost poetic dialogue-heavy scenes.  As Faith desperately looks for an escape from the pain of reality, she summons a darkness that is at once terrifying yet undeniably seductive.

SCARS is now available for public viewing through Thunderstryker Films on You Tube, along with BORDER PATROL AND FALLACIOUS.  Be sure to stick around after the credits for an important bonus scene.

You can check out the teaser trailer below.