Short Reviews on Short Films: A Couple of the Best Horror Shorts Featured During the 2017 Nightmares Film Festival

This year’s Nightmares Film Festival featured an incredible selection of unique, thought provoking and unforgettable horror shorts. Below are brief reviews of two short films I was fortunate enough to catch during the festival. Among an impressive line-up of the genre’s best and most compelling new content, these shorts really stood out for me: “Machine Baby” and “The Son, the Father”.

Directed and written by Sean Richard Budde, Machine Baby is a ten-minute short about a reckless paparazzo who finds himself in the middle of a pageant manager’s deadly plot to win the Miss America pageant. Made in a very Lynchian style, the horror short has a nightmarish quality that is addictive to stare into.

Right from the opening seconds, viewers have a sense of foreboding while staring at a beaming, beautiful woman, and we can only dread her fate. Interestingly, the female costars within the feature have no speaking lines, yet they convey the most earnest emotions and captivate the screen more so than their male lead counterparts.The leads’ deliveries felt noncommittal and didn’t reach as far as their costars in terms of believability.

The sound design and score by Jay Caston and Tom Schraeder made the atmosphere range from ambient to harrowing, just like a nightmare. The “fuel breaking” scene was well shot and, again, hard to and hard not to look at.

Take what you will from it; it’s unmistakably thought stirring, and its bizarre nature is permission to speculate and interpret at the viewer’s discretion.

(Machine Baby is part of “World of Death”, an amazing horror short compilation available on Blu-Ray.)

The Son, the Father 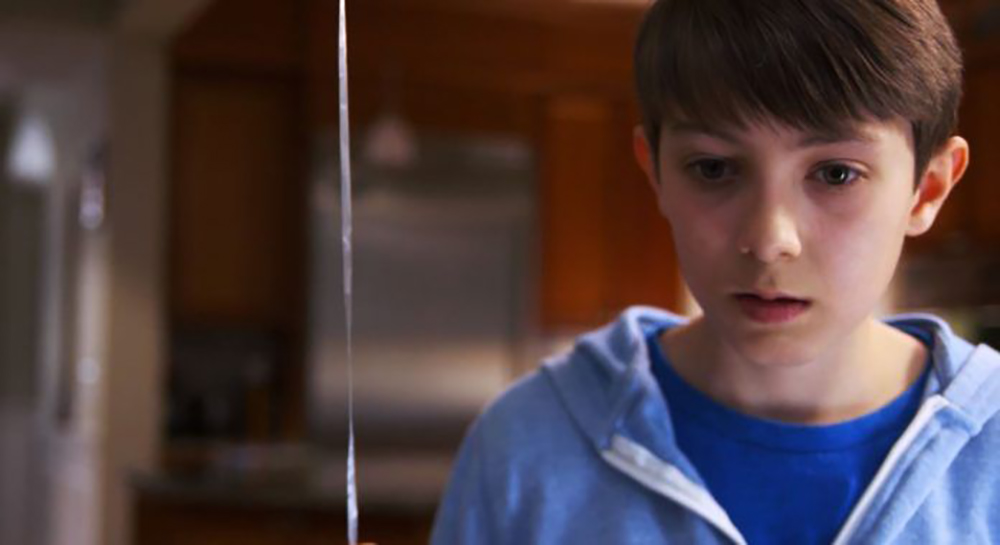 The scariest monster will always be people, and The Son, the Father (written and directed by Lukas Hassel) is another great piece of backing evidence.

Set around a young boy’s birthday, the events from that day have twisted consequences far into his future. The boy in question is celebrating his birthday, albeit sullenly, as his mother is an alcoholic. She also happens to be one of the most believably cruelest and most effective villains on screen. Colleen Carey portrayed a true human monster; one that can change their faces at will and terrorize for years without notice. The character isn’t comical, and she isn’t a beast from outer space. She represents real people and that’s the scariest part.

The short had a ‘We Need to Talk About Kevin’ vibe in the best of ways. The blood was appropriately sparse but so well placed and timed. The tension floated above the characters the whole time, and that whole time viewers were waiting for it to explode. The twist is worthy of a good ‘Tales from the Crypt’ episode; just enough hinting to make it noticeable for those searching for it but subtle enough to trick the majority.

With clever writing and clever execution, this is a short you can watch again and again. It has convincing performances from every player and a strong finish that will have you grinning with bitter delight.