A Cabin In The Woods That’s Worth A Visit: The Low Budget Indie Horror “Black Creek” is a Fun and Effective Film About Demon Possession Worth Checking Out. 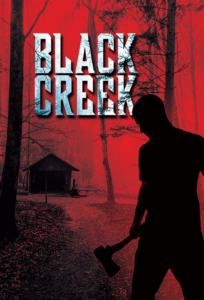 One of the pleasures of writing for Morbidly Beautiful Horror is that we get to see a lot of low-budget, independent horror films.  The spirit and inventiveness that drove artists like Sam Raimi to make EVIL DEAD in the late 1970s still thrives today.

The DNA of BLACK CREEK is similar to recent releases Netflix’s THE RITUAL or THE GATEHOUSE (an independent movie recently reviewed on Morbidly Beautiful https://morbidlybeautiful.com/reel-review-gatehouse/).

BLACK CREEK begins with the telling of a folk tale of early American settlers stealing land and lives from Native Americans, and how the settlers and all who came to that land would be cursed by a demon who walks in the skin of the dead. We then are introduced to Mike (Chris O’Flyng), an awkward and weird high school student who has recently lost his father in a tragic accident.

Though coming across as a bit of a social pariah at school, he finds that a girl, Heather (Brianna Shae) is interested in him.  Later, when Mike makes plans to bring his father’s ashes to a family cabin deep in the woods of Wisconsin, plans are made to make a weekend trip of it with Heather, Mike’s friends Harry (Michael Hill), Lloyd (Robert Lowe), Rachel (Rachel Vedder), and Mike’s sister Jenna (Leah Patrick).

Soon after arriving at the cabin, the group of friends begin to experience strange and terrifying events. Mike begins to have memories of visions he had at the cabin as a child, and the mystery of a murder begins to reveal itself. Mike and his friends have to figure out what’s happening, quickly, and determine if the legend of Black Creek is real.

Director James Crow places the failure or success of BLACK CREEK on his young and mostly inexperienced main cast of actors. Crow’s trust in them is well placed, as they all carry the movie. There’s never a scene where their performances detract from the movie. They come across as natural friends with good chemistry.

BLACK CREEK does not have the gore of some movies, but what make-up effects the movie has are used to great affect. Being a low budget film, editing becomes very important.  Crow can’t show an axe, spike, or bullet entering a body with a shower of blood from a squib. But if the film is edited well, and all the audience needs is the impression of violent impact.

Editors Eric Chan and Jeremy Wanek have done an excellent job creating the impression the audience is seeing more than is actually shown on screen.

Story wise, there are some loose threads that could have been tightened up.  There’s a foreshadowing shot of a dreamcatcher, and there are a number of shots of the kids coming across other dreamcatchers hanging in the woods.  There’s an implication that they are important in dealing with the demon, but they do not come into play.  This is a missed opportunity to broaden the mythology of the evil entity hunting the main cast.

A storyline about a long ago murder and Mike’s father’s potential involvement in the crime is brought up a few times, but like the dreamcatcher, feels like a missed opportunity to broaden the story.

These are a few minor criticisms as BLACK CREEK is a solid and fun horror movie. BLACK CREEK is available right now on Amazon Prime, iTunes, and other on-demand services.