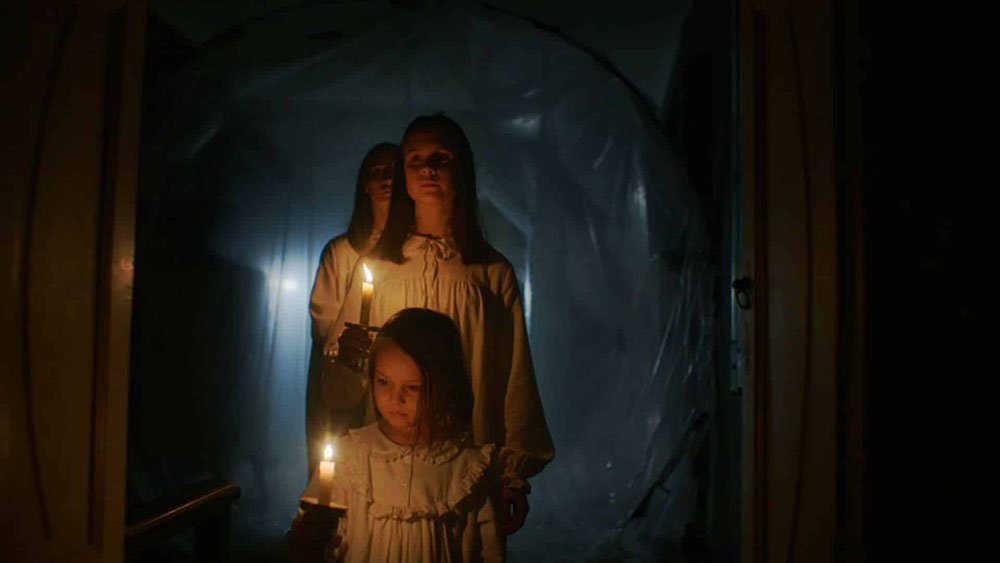 Dedicated to women everywhere who resist.

Darkness is a difficult film to discuss without revealing too much or detracting from the strange and hypnotic first-time viewing experience. It’s a film about isolation, fear, and the existential threat of a dying world. But that’s just the surface layer. Underneath this thin veneer is a much darker and terrifying tale of abuse, manipulation, and the fight for liberation.

From the first chilling frames, we know something is not right in this spacious, cavernous home to three sisters: an empty refrigerator; boarded up windows; a flash of a bloodstained wall. The girls walk somberly through the dark house by candlelight, down the corridors draped in plastic. An overwhelming sense of sadness and foreboding hangs heavy in the air. It’s eerily quiet, save for the barely there score that hums with dread, ever so faintly in the background — just enough for you to notice the jarringly abrupt cut (the first of several) to a stark, silent title screen, imprinted with the words, “Daily Life”. 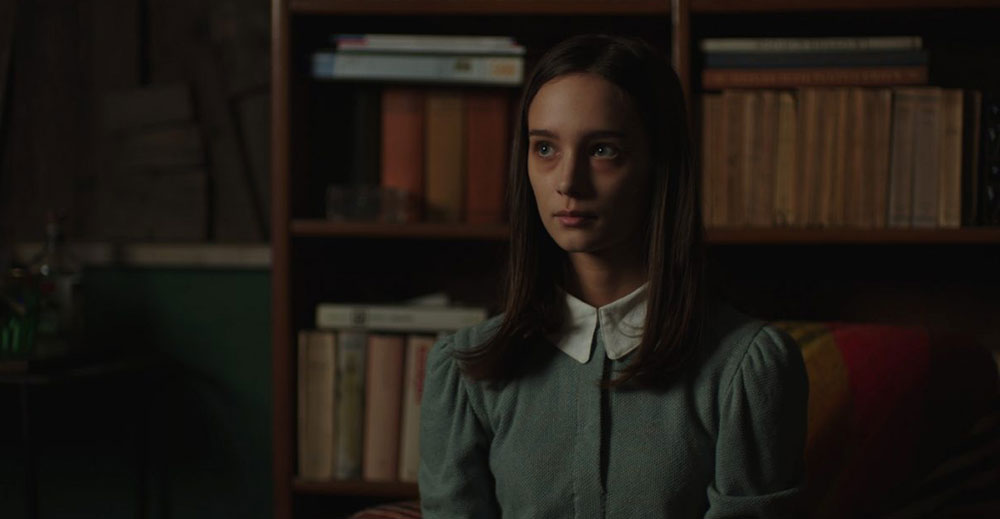 We learn how the three girls — 17-year-old Stella (Denise Tantucci), budding teen Luce (Gaia Bocci), and the youngest, Aria (Olimpia Tosatto) — spend their days; exercising to old videotapes, teaching Aria to speak, intently watching the clock and waiting. When it’s time, the girls rush to the door, dressed in their Sunday best. A man unlocks the multiple dead locks and enters the plastic covered foray, wearing hazmat gear and a gas mask. He has a bag filled with small rations.

We surmise this man (Valerio Binasco) is the girls’ father, but there’s very little warmth or tenderness in his interaction with them. He demands they read aloud from a book on the apocalypse at the dinner table, while they pray to “He who sees all and hears all.”

After dinner, Luce begins to ask questions. “Daddy, will the sun ever heal? Why can only males go out?” He forcibly grabs and shakes her, screaming only men are strong enough. He had to kill three men just to bring home scraps of food — something a small, skinny thing like her could never do.

This is only the first glimpse of the father’s contempt and mistrust of women, something he’s readily eager to expound on at any opportunity. 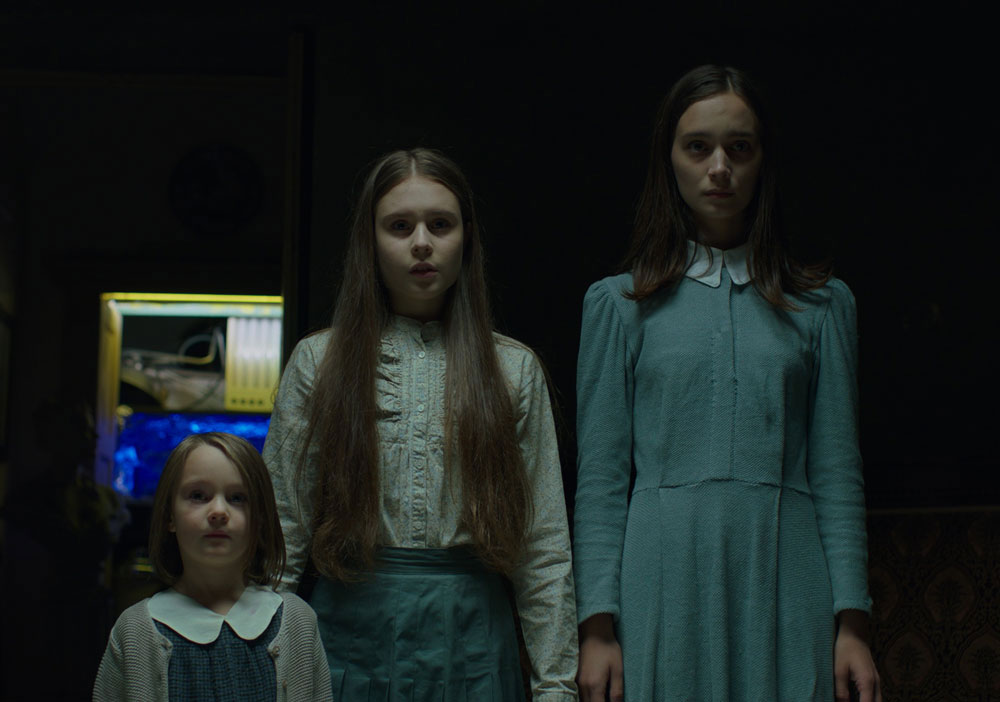 Afterwards, he immediately regrets his outburst and, for the first time, shows some affection to his daughters. It’s a deeply uncomfortable scene, revealing the tell-tale signs of an abusive relationship marked by flashes of rage and post-aggression gaslighting. He tells the girls that, while they don’t deserve it, tomorrow will be special. Another cut to a silent title screen: “Air Day”.

The girls descend the stairs dressed in layers of protective clothing and wearing helmets. The father removes some boards from the windows, and the sunlight floods the dreary home. It’s joyous and intoxicating, as they breathe in their first taste of the outside in god knows how long. The celebration doesn’t last long, however, as he forces them to put on goggles offering almost zero visibility — thrusting them back into the eternal darkness of their daily existence.

Soon, we get clues that the father’s abuse extends beyond just the physical and emotional. As Luce starts to come into womanhood, Stella is horrified to see her father’s attentions shift to her in a way that will make your skin crawl. When Stella tries to protect her sister, her father accuses her of being just like her deceased mom. The next day, he disappears, leaving the girls to fend for themselves. Starving, Stella realizes she must venture out to find food.

It’s then we realize the girls are facing a very different, far more insidious, kind of horror than we first imagined.

Steeped in rich symbolism, with deep feminist themes running throughout, the film’s titular darkness is reflected in both literal and metaphorical ways. 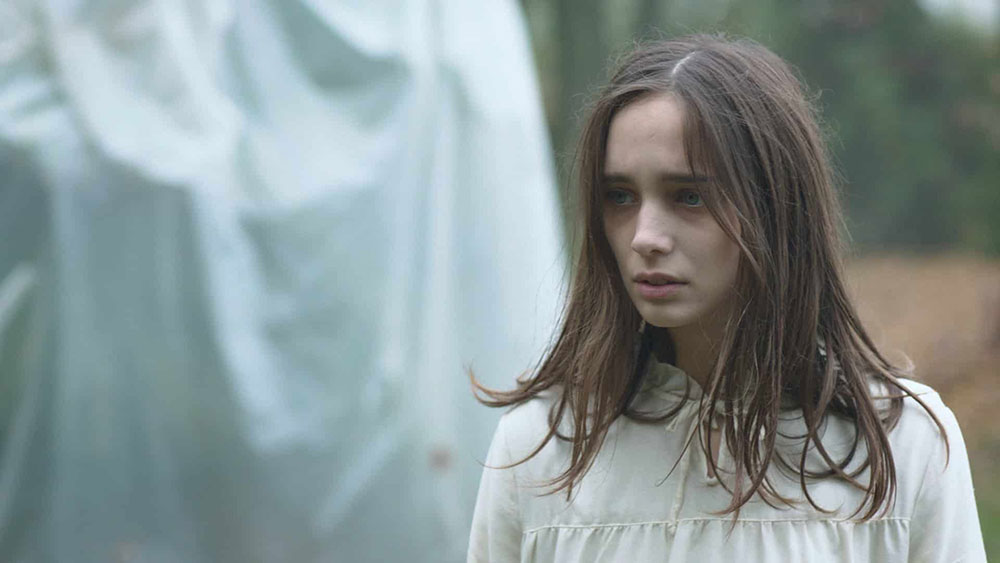 The sisters face a very real darkness, trapped indoors without sun or artificial light. But they also live under the shadow of abuse and patriarchal tyranny — forced to endure a barrage of horror stories from their father about how women, the far weaker sex, fair considerably worse in the dangerous world than much stronger men. He doesn’t understand why a woman would want to leave the home; maybe it’s the devil tempting them. If only they’d pray for understanding.

The young stars do a phenomenal job fully inhabiting their characters and carrying the emotional weight of the film on their shoulders. Meanwhile, from a technical standpoint, everything works.

For a film that spends so much time draped in darkness, it is gorgeously lit. The cinematography by Marco Graziaplena is sublime, and the attention to detail in the minimal set design impresses. In addition, the use of wildly divergent music as a narrative tool works exceedingly well, especially when combined with moments of unnerving silence.

Narratively, the film is more concerned with revealing the subtext of its darker themes than telling a straightforward, satisfying story. Rossi requires the viewer to do some heavy lifting to fill in the gaps in the plot, holding back many answers to the questions she craftily tees up. The film also leans heavily into its arthouse sensibilities, which may turn off more mainstream viewers.

But those looking for a moody, atmospheric, and thought-provoking deviation from the ordinary should find a lot to love here.

Darkness made its US Premiere at the Nighstream Film Festival on October 10, 2020.