A heady and heavy dramatic thriller about the exploitation of fear and the rise of oppressive power, “Bab” is a difficult but compelling watch. 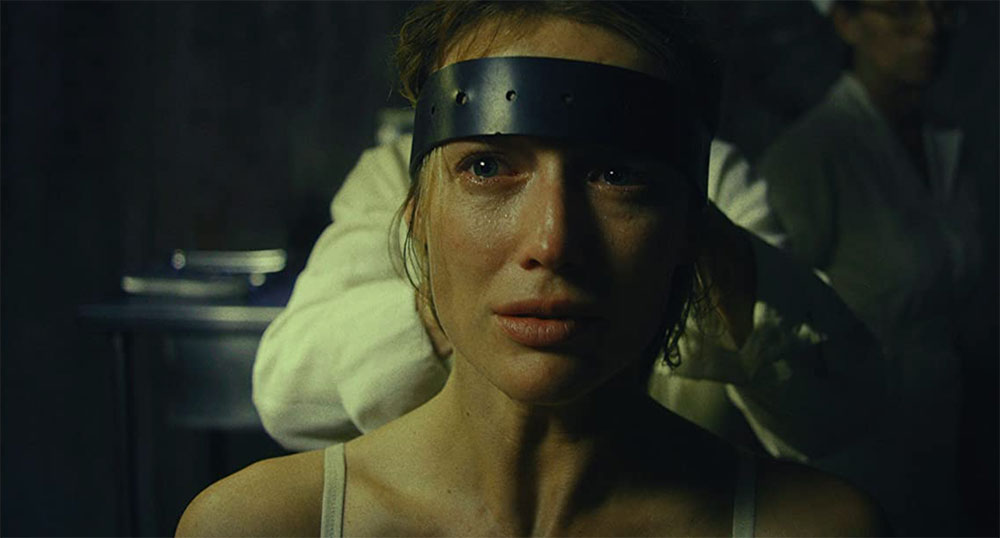 The year is 1946. An ominous voice on the radio profusely praises the moral leadership of Mr. Bascum, the man responsible for restoring “ethical prosperity” to a town ravaged by sinful behavior — such as drug abuse and prostitution — through a series of severe yet humane procedures.

A distraught young woman named Barbara (Sarah Dumont), Bab for short, is driving with her young son Donnie and her infant daughter Bean. They arrive at a large facility, and Bab asks Donnie to watch his sister while she goes inside for a bit. Visibly terrified, she slowly enters the dank and foreboding building, taking a seat in a single white chair in the middle of an empty room. A man wearing a full metal back brace approaches her. We hear the sound of his brace before we see him, and it’s hair-raising. The man is Bascum (Robert Miano), and he assures the frightened Bab that she’s doing the right thing. He tells her to imagine a life no longer defined by her vulgar behavior, a life when her children will no longer be tarnished by her reputation. And he implores her not to see it as a punishment but as an opportunity to become someone better.

We aren’t quite sure why she is there or what terrible sins she needs to be cured of, but it soon becomes clear that she has likely resorted to prostitution to feed her children. Upon entering the treatment room, nurses strip her and Bascum instructs them to apply nodes to Bab’s “primary pleasure sensors”. A man is instructed to stand naked before her while she undergoes a painful and primitive form of treatment.

Donnie begins to worry about his mom, and he enters the facility looking for her. He hears her horrible screams from behind a door and catches a glimpse of the barbaric procedure.

Bab is traumatized to know her son has seen her in this state, and Donnie is clearly shaken to the core as well. 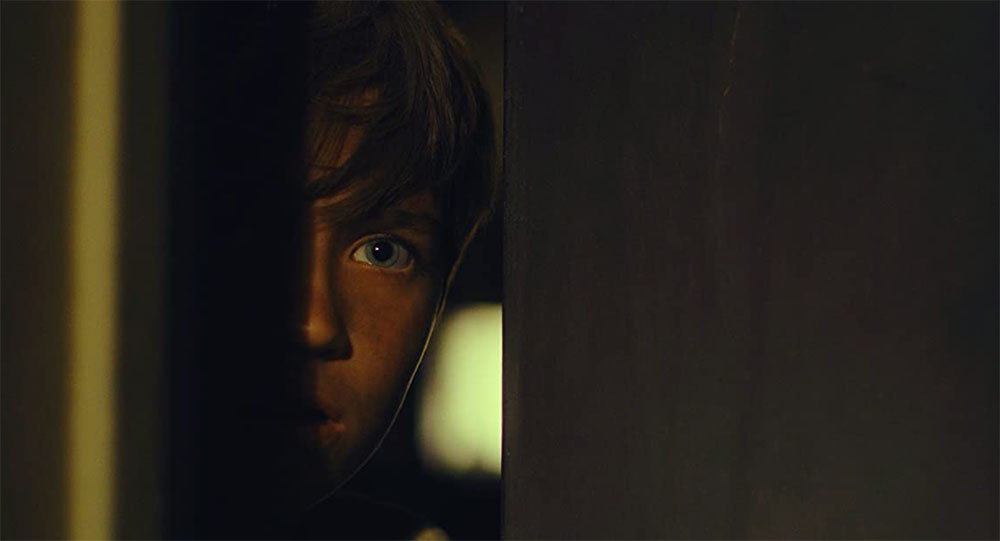 Cut to 14 years later, and a grown Donnie (Nicky Heyman) is beating a man to a bloody pulp for messing around with his sister, while his friend Brenton (David Gridley) looks on helplessly.

We later learn that the man is the teacher of his sister, Bean (Jessica Treska), and he was tutoring her in her home. But Donnie, who has an explosive anger problem, is convinced the teacher’s intentions were impure. While we’re at first led to believe that this is immensely irrational behavior, we get hints later on that Donnie may be more intuitive than he gets credit for.

Donnie and Bean have been struggling on their own, with their mom, Bab, still confined to the treatment facility many years later. The town they live in is bleak and oppressive, resembling a post-apocalyptic wasteland. Numerous shots of dead fish washed up the shore are shown throughout the film. The water has been poisoned, but we never learn how or why. Periodically, apocalyptic alarms ring out, requiring all the town’s people to scurry into their bunkers. It’s a drill designed to keep them safe; from what or who we aren’t sure.

Donnie spends a great deal of time with the owner of a hotel, and older black man named Mr. Harold (Matthew Greer), who it seems has been something of a father figure to Donnie in the absence of his parents.

One day, a group of men led by Bascum enter the hotel and forcibly restrain Donnie and Mr. Harold. Among them is Bascum’s son, Warren (Marshall Fox), a feral-like simpleton. Wide-eyed and drooling, he’s prone to rabid behavior and has to be locked up and led around by a leash. Bascum demands to see the ledger, accusing Mr. Harold of allowing unsavory clientele into his establishment. Harold explains that he doesn’t pry into their personal business; they’re all just paying customers to him. Bascum tells Harold to show more gratitude, as Bascum has “labored greatly to make sure the negro is treated fairly in the town.”

For Harold’s failure to uphold the established moral standards of their society, he is to be punished. 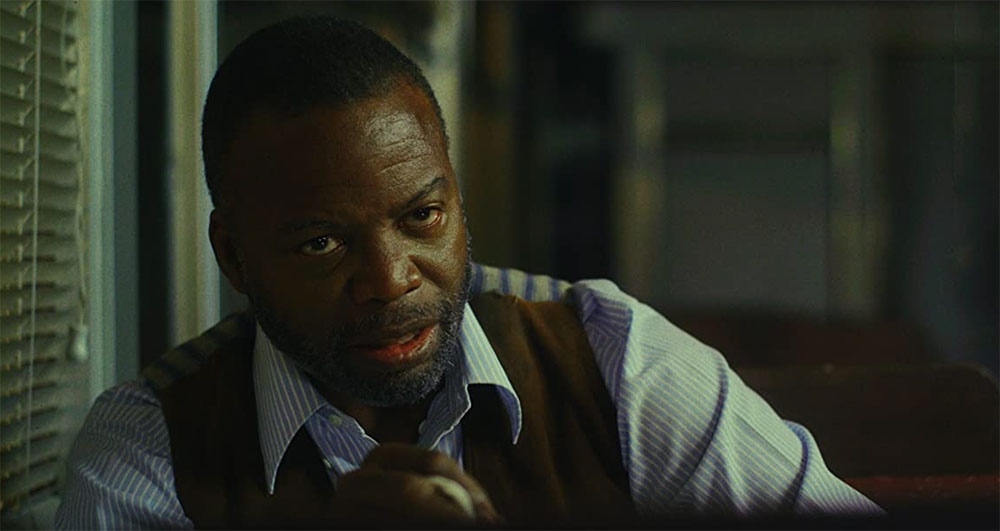 And punishment in this town comes in the form of limb amputation. As Bascum pulls out a knife to cut off Harold’s leg, Donnie becomes frantic. Seeing this, Bascum offers an act of ‘mercy’ and instructs his men to leave the leg — just take all the toes off his foot.

As a broken Donnie retreats to the town diner to commiserate with his friend, the diner’s owner Miss Sheri (Brynn Horrocks), a man named Milt (Sterling Macer Jr) is seated in the booth behind him. He tells Donnie he understands his suffering and wants Donnie’s help to end the tyrannical reign of the monster known as Bascum. Donnie insists Bascum is untouchable and wants no part of the scheme. But when Milt says he can help get Bab out of the horrible facility she’s in and transfer her to a modern behavioral center in another city, Donnie agrees to help.

Milt shares a hotel room with a woman named Rhoda (Suzan Crowley). He clearly loves her, but she is cold and standoffish. We later learn she has her reasons. It’s Rhoda’s job to exploit Bascum’s feelings for her, distracting him long enough for  Donnie and Milt to take out his men and clear a path to kill Bascum himself.

As the film progresses, we uncover the depth of Bascum’s depravity and his pseudo-moral hypocrisy. He confesses the bunker drills are just to keep people living in fear because, without fear, they will only wallow in pleasure and perversion. We learn about his sordid relationship with Rhoda and witness the extent of his intolerance and cruelty to those he deems unprincipled or impure.

Although just a man, he’s the very personification of the boogeyman.

Bab is a slow-burning, disorienting nightmare. 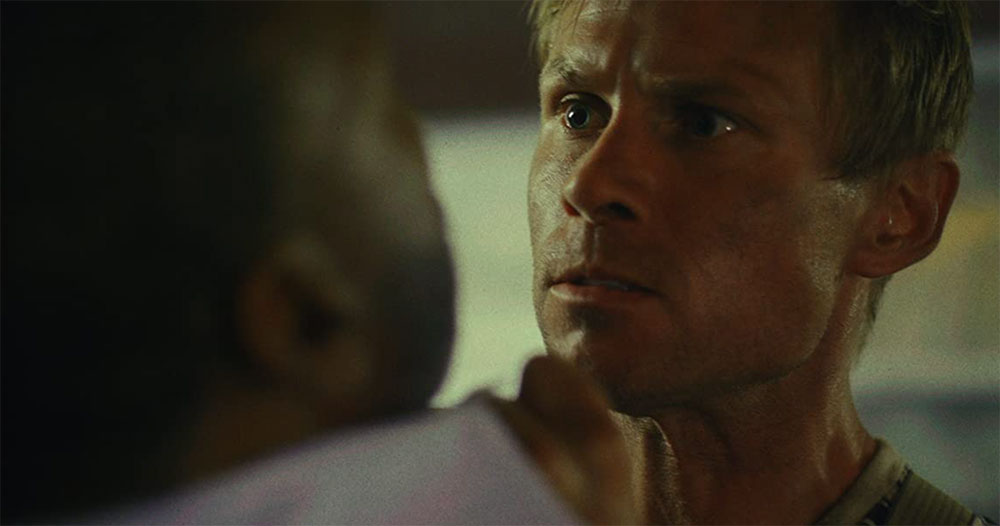 Its languished pace will surely turn off some viewers, as will its intentional obfuscation and lack of straightforward storytelling. It’s best suited for the arthouse crowd who appreciate a less linear, more cerebral approach to genre filmmaking.

Despite being more thriller than traditional horror, it is an extremely unsettling film with a heavy atmosphere of dread. The chilling soundscape — with its constant low hum and sinister drumbeats — worms its way under your skin, alternating between deeply disquieting to hauntingly beautiful.

BAB also tackles several complex themes, including the corruption of power and justice, the toxic nature of religious oppression and sanctimonious duplicity, misogynistic views about women and female sexuality, and the power of fear to manipulate and control people.

Despite the name of the film, this is really Donnie’s story. And Heyman is exceptional as the troubled young man torn between heartbreak and rage, struggling with concepts of justice and morality. As he faces the judgement of his sister and his best friend, he grapples with his conscience, even as Milt pressures him to push his doubts aside to do what must be done.

Filmmakers Joe DeBoer and Kyle McConaghy, in their feature film writing/directing debut, do a masterful job establishing a mood and creating the dismal world these characters inhabit. You can feel the sadness hanging heavy in the air, and it’s not hard to understand how a man as reprehensible as Bascum could have risen to such power. Like all of history’s most treacherous leaders, he skillfully exploits vulnerability and helplessness — convincing a community that even sadistic order is preferable to uncertain chaos. The fact that they may actually need, even desire, that kind of tyranny is the most terrifying part of Bab.

Bab made its world premiere at the Nightmares Film Festival: Masquerade.