“Duncan” is a searing satire about fake news and fearmongering that’s as unsettling as it is funny, daring us to sympathize with the unsympathetic. 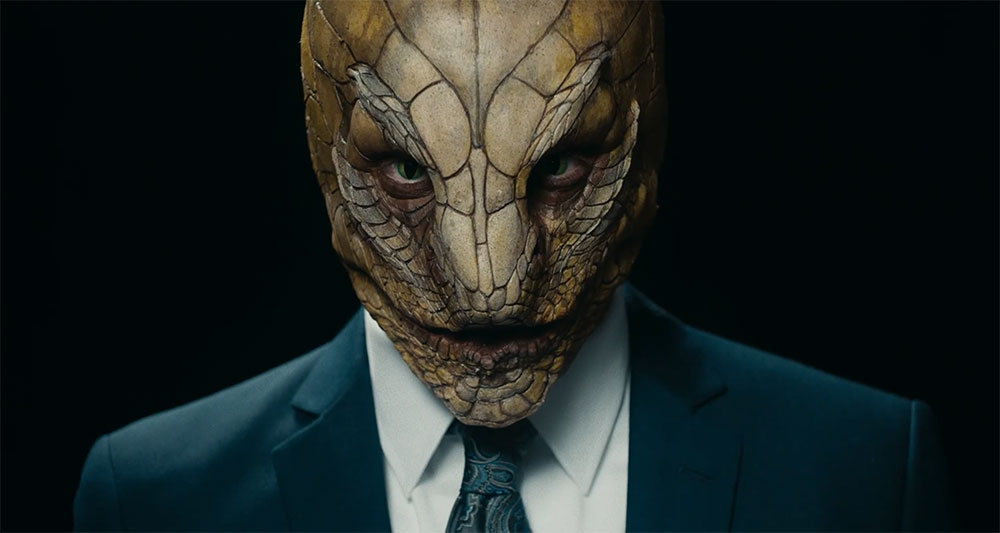 Just before tuning into the final presidential debate, dominated by talk of fake news and hidden agendas, I tuned into the Nightmares Film Festival: Masquerade for the virtual world premiere of John Valley’s Duncan. Billed as a “grindhouse Pizzagate satire”, the film unflinchingly explores some of America’s most insidious cultural and political problems, including dangerous conspiratorial thinking, toxic rhetoric, and the exploitation of vulnerable people through manipulation and misinformation.

Duncan feels especially — and alarmingly — timely given the recent resurgence of the long-debunked hoax known as Pizzagate, which inspired the film, and the rise of the related QAnon conspiracy theory. Once again, these conspiracies are playing a role in the 2020 election just as they did in 2016, with President (then candidate) Trump lending credence and credibility to the outrageous, widely discredited allegations.

For the uninitiated, Pizzagate sprung up in 2016 when proponents falsely claimed several high-ranking Democratic Party officials were secretly involved in a massive human trafficking and child sex ring, aided by several U.S. restaurants, including the Comet Ping Pong pizzeria in Washington, D.C. Members of the alt-right and several ultra conservative journalists knowingly spread the unsubstantiated claims on social media.

As crazy as it all sounds, these malicious lies generated real fear and hatred. In response to the allegations, a heavily armed man from North Carolina traveled to Comet Ping Pong to investigate, firing a rifle inside the restaurant. The restaurant owner and staff were also bombarded with death threats from other believers and harassment that continues to this day.

For his version of the gnarled story, writer/director John Valley moves the action from D.C. to his hometown of Austin, Texas, and Comet Ping Pong becomes the fictional Tootz Pizza. 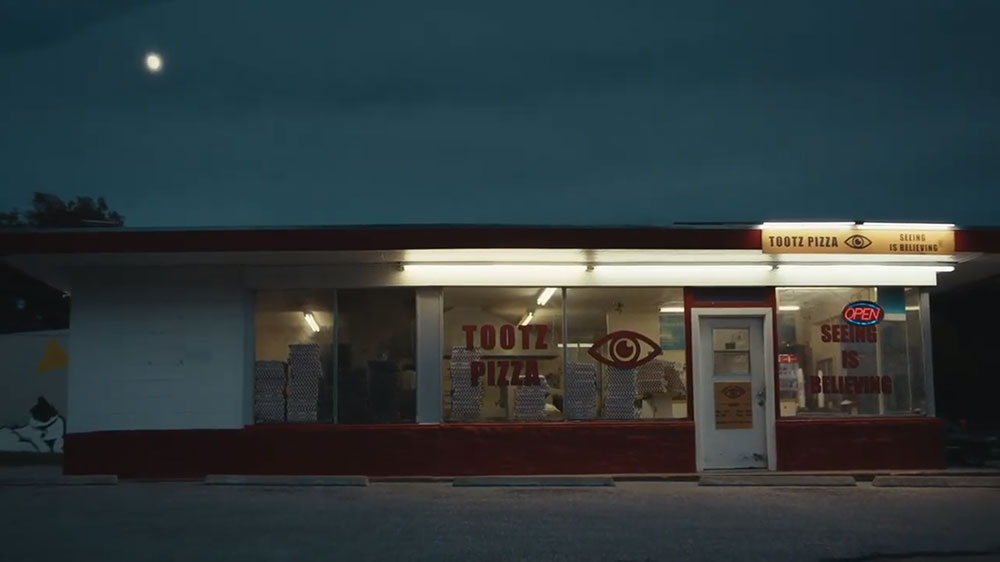 The film begins ominously, echoing shades of Twilight Zone, as a man in a suit slowly enters the frame and approaches the camera. Set against a stark black backdrop, he solemnly recounts the horrific events of October 10, 2018, when a violent murder spree took place in Texas that was linked to a debunked conspiracy theory. The whole thing was caught on videotape, and the footage helped introduce the world to “the most dangerous man in America”.

We then rewind to one day earlier, where we meet a young black woman named Karen Black (Alexandria Payne). It’s her first day on the job as an intern for a popular conspiracy radio talk show in Waco, Texas. She listens in abject horror as host Terri Lee (Lee Eddy, channeling Pizzagate promoter and conspiracy peddler Alex Jones of InfoWars infamy) “breaks” the news that a local pizza joint in Austin is really a front for an advanced race of child-kidnapping, Satan worshipping, lizard people who also happen to be part of the Democratic Deep State.

After an unfortunate mishap on the set, Karen is fired. Believing every word of Lee’s unhinged tale of terror, the aspiring journalist grabs her video camera and decides to head to Austin to investigate. But, afraid for her safety, she tries to hire a far-right militiaman named Duncan Plump (Tinus Seaux) to accompany her. At first, Duncan is reluctant to get involved. But he changes his tune when he learns rival militia member Philip (played by John Valley himself) has offered his services. Compared to Philip, a deranged white nationalist who believes immigrants are destroying America, Duncan appears relatively level-headed. Concerned Philip will worsen the situation, he agrees to drive Karen to Austin in the van that doubles as his home.

Upon arriving at Tootz Pizza, their plan to surreptitiously scope out the place goes horribly awry when an agitated Philip shows up and starts opening fire, killing several employees and kidnapping Karen. As the violence quickly escalates and things go from very bad to much, much worse, it’s both horrifying and heartbreaking to witness the collapse of Duncan’s entire framework for understanding and coping with reality.

Although his distorted world view is definitely problematic, it’s easy to empathize with his plight.

That’s largely thanks to a luminous, nuanced performance from Seux who infuses Duncan with a vulnerability that transcends even his most egregious behavior. 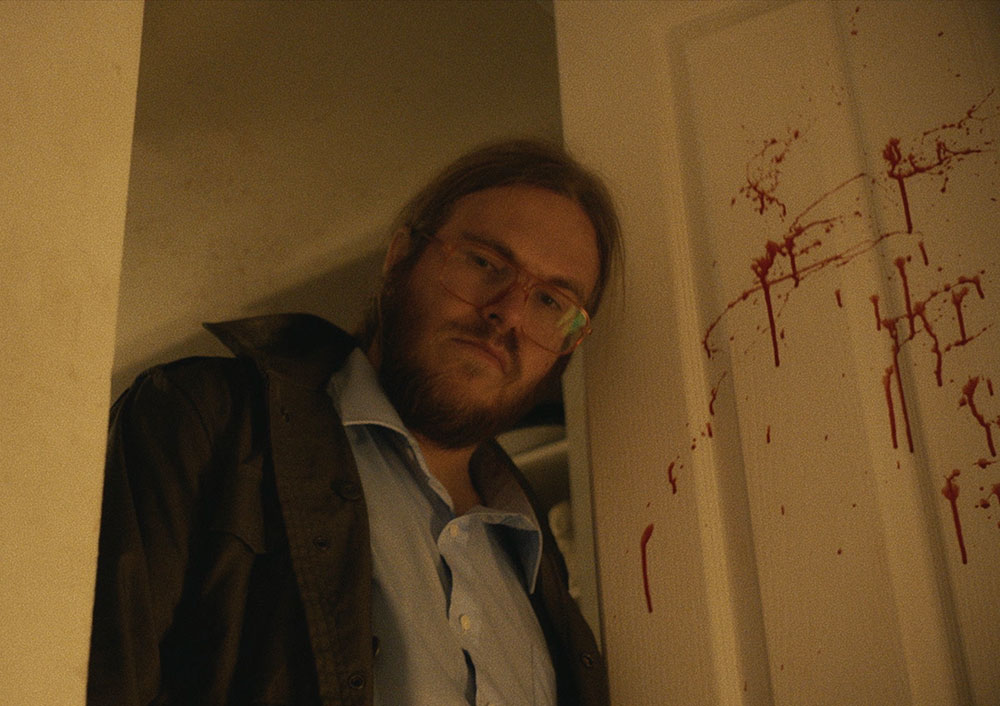 It’s also no small testament to the well-crafted, tightly woven script from Valley, who clearly understands the disruptive conspiracy theorists and far right agitators are as much victims as they are victimizers.

It’s easy to dismiss all these people — and their distasteful and often detrimental thinking — out of hand, writing them all off as terrible blights on a civilized society. And, to be clear, excuses should never be made for hate speech, violence, and intolerance. There is no such thing as a “very fine” White Nationalist. But it is possible, and I’d argue essential, to try to understand what drives a person to such extreme and toxic beliefs. Only by understanding can we ever hope to truly combat such dangerous ideology.

Through some excellent character work and poignant exchanges, like when Karen and Duncan argue over the intended and actual meaning of the Confederate flag, we begin to understand the insidious nature of indoctrination and ignorance.

The bastard son of an infamous cult leader (David Koresh of the Waco Branch Davidians), Duncan doesn’t really know what he believes or, more importantly, why he believes. He can’t really explain why he has Confederate flags on his license plates, especially as he feels nothing but respect and care for Karen — and is even quick to defend her against hateful racists.

One of the most powerful scenes of the film comes when Duncan is forced to take his shirt off in front of an elderly black couple after being shot and needing medical attention. Full of shame and regret, he apologizes for the Swastika tattooed on his chest and professes that he is not the same person who got that tattoo years ago.

Duncan is exactly the kind of person that power hungry people with malignant agendas target, as he is confused, vulnerable, and desperate for a sense of purpose and belonging. 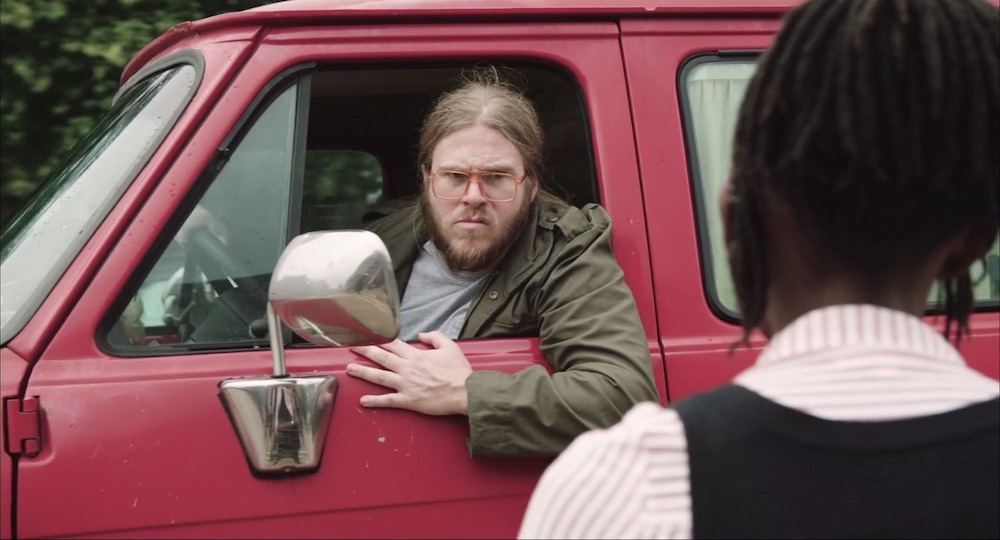 Conspiracy theories like Pizzagate are rooted in feelings of fear and powerlessness. Some people are willing to believe, without question, that reptilian pedophiles are in control of the government and the media; these are people who seek to make order out of chaos, who long for their place in a world that feels so inhospitable.

While there are plenty of people behaving badly in Duncan, the real villains are the people like Terri Lee who exploit vulnerable people and profit off fear and manipulation. It’s not the people hiding in pizza parlor basements you have to worry about. It’s the people stealing the spotlight, filling the airwaves and social media with hateful rhetoric that has been legitimized by its prominence and frequency.

Duncan is a remarkable feature film debut from Valley, who previously made a name for himself in Austin by directing videos for a host of local bands. The film was shot on a shoestring budget, which allows for a cinema verité approach that enhances the real and chilling nature of the subversive satire. Despite being exceedingly dark, it’s also disarmingly funny and a great deal of fun to watch. But it never veers into camp or ridiculousness.

Rejected by Sundance festival programmers for being “incredibly relevant, to a terrifying degree,” I can’t think of a more ringing endorsement for a film that is not only wickedly entertaining but also absolute essential viewing for the strange and terrifying times we find ourselves in.

Duncan holds a black mirror up to an ugly reality. Maybe there aren’t any lizard people. But there are plenty of snakes spewing toxic venom, and that’s infinitely more frightening.