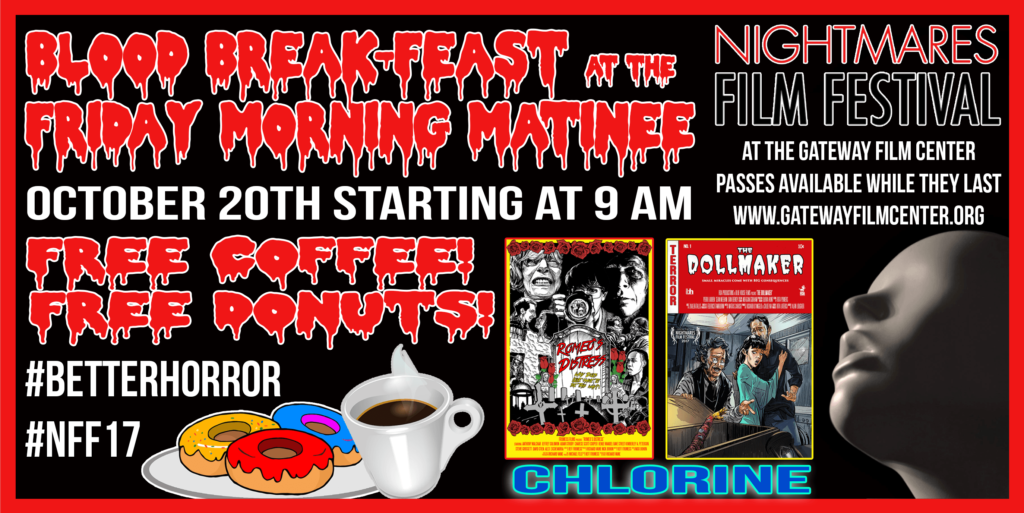 Following the MAGNUM opening of the 2nd annual Nightmares Film Fest with Victor Crowley (Hatchet 4, special appearance by Adam Green), Leatherface (Texas Chainsaw Massacre prequel ONLY one of ten screenings) and a rousing, hilarious block of horror comedy shorts – #NFF2017 will CONTINUE the next morning by starting the day in the RIGHT kind of way.

The “bloody” breakfast will consist of FREE Coffee and Donuts followed by a morning matinee of the buck-eyed state premieres for Romeo’s Distress, Chlorine, and The Dollmaker.

Romeo’s Distress (82 mins) is a gothic tale of horror about James and his unrequited love for Jane and the sadistic response of her father Dale. Is love a curse..? (Written, Directed, and Produced by Jeff Frumess.) www.facebook.com/romeosdistressmovie/

The Dollmaker (10 mins) is about a grieving mother who latches onto a magical surrogate for her lost child. But she will come to learn that small miracles come with big consequences. (Written by Matias Caruso (Mayhem), Directed by Alan Lougher, Produced by Richard D’Angelo and Chloe Na.) www.facebook.com/thedollmakermovie/

The FREE coffee and donuts will be on a first come, first serve basis while supplies last.

WARNING: DO NOT EAT ANY JELLY DONUTS. Rumor has it that they may or may not contain REAL HUMAN BLOOD. If you find Jelly in your donut, please contact your local Donut Shop and support them by buying MORE donuts before contacting the authorities and the go to see a doctor or physician IMMEDIATELY for ACUTE VAMPIRITUS.

The Nightmares Film Festival 2017 which has recently just been called “The Cannes of Horror” (iHorror) will take place from October 19th – October 22nd at the Gateway Film Center in Columbus, Ohio. It has been ranked “among the premier horror festivals in the country, if not the world” (HorrorHound).

Passes to all four days of #NFF2017 can be purchased at www.GatewayFilmCenter.org