Reflecting on Nightmares Film Festival: A filmmaker’s four-year love letter to the festival that convinced him to keep making movies. 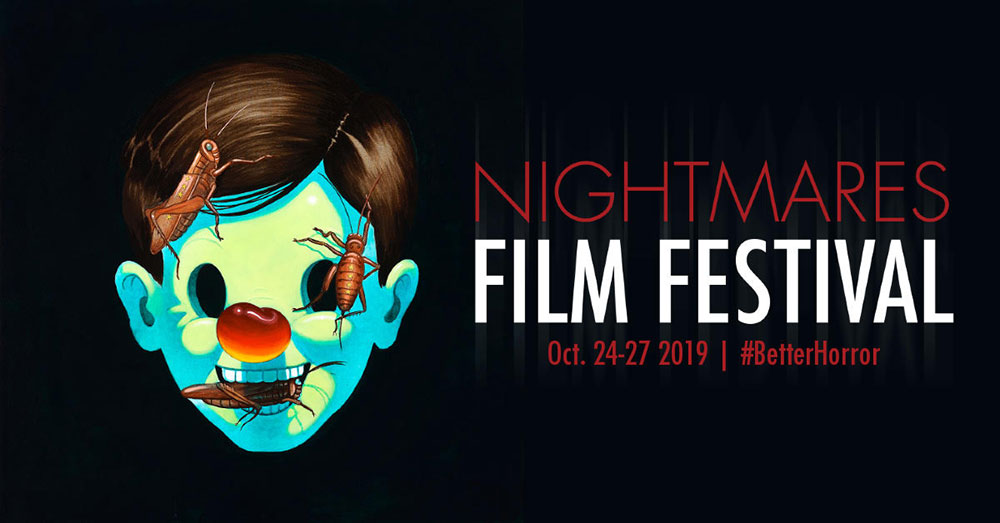 As all great horror stories start, I first found out about Nightmares Film Festival from my brother’s girlfriend’s former film professor’s Facebook post. Its existence was telephoned back to me as a possible answer to a question I was still afraid to ask.

In January of 2016, I left college with a piece of paper that promised I could make decent enough car dealership commercials to keep Pop Tarts on the table. But I had not the knack or the need to sell Ford Foci at no money down.

I wanted to make movies. But could I?

Writing is cheap. Directing is expensive. When I was running-and-gunning with a Canon T3i to make sketches for a weekly campus TV show, they were about even. The world was a backlot. Gear was free to rent and sometimes it even worked. Production was tight, but more or less guaranteed — if you couldn’t write, shoot, and cut it in three days, you just didn’t do it.

Without all that wind at my back, the idea of turning my full attention to writing sounded just swell. But I decided, if I could keep whatever I had left of that pace and work with the people who were used to it, it was worth one last shot. 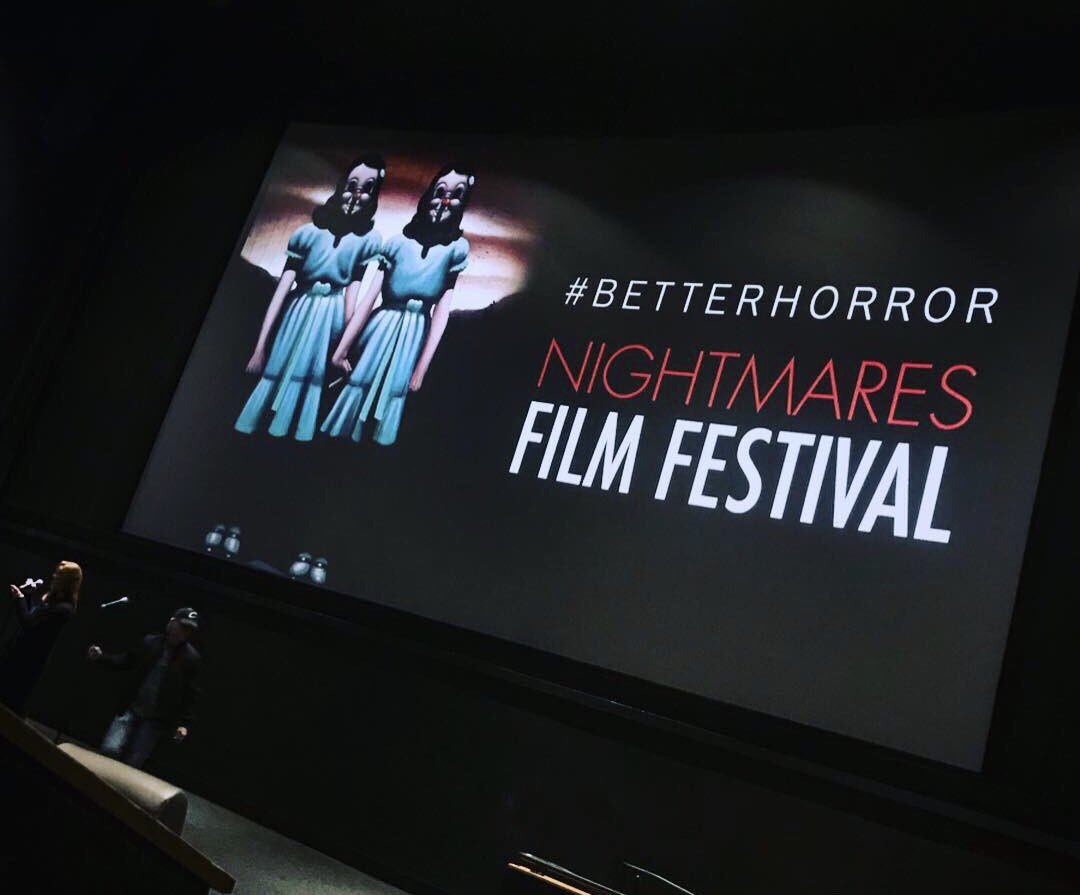 Now. Is it healthy to stake your future on a single project? Absolutely not. Did I? Absolutely.

But if my post-grad directorial debut could make any kind of impression beyond my friends’ parents, then I’d stay behind the camera a little longer. If not…

I shudder at the thought.

I wrote it, shot it, cut it, and promptly couldn’t figure out what to do with it. I knew festivals existed. I knew that those little flower strips around festival names were important.

But my movie was a 12-minute parody of The Evil Dead. So much for those little flower strips. Nightmares uses mannequins instead.

I didn’t know what to expect, how to dress, where to park. I just knew the gang would get to watch our work on an honest-to-god movie screen. Columbus was only a two-hour drive away, so the plan was simple — head down for our block on Sunday, see it, then hug. Can’t miss. 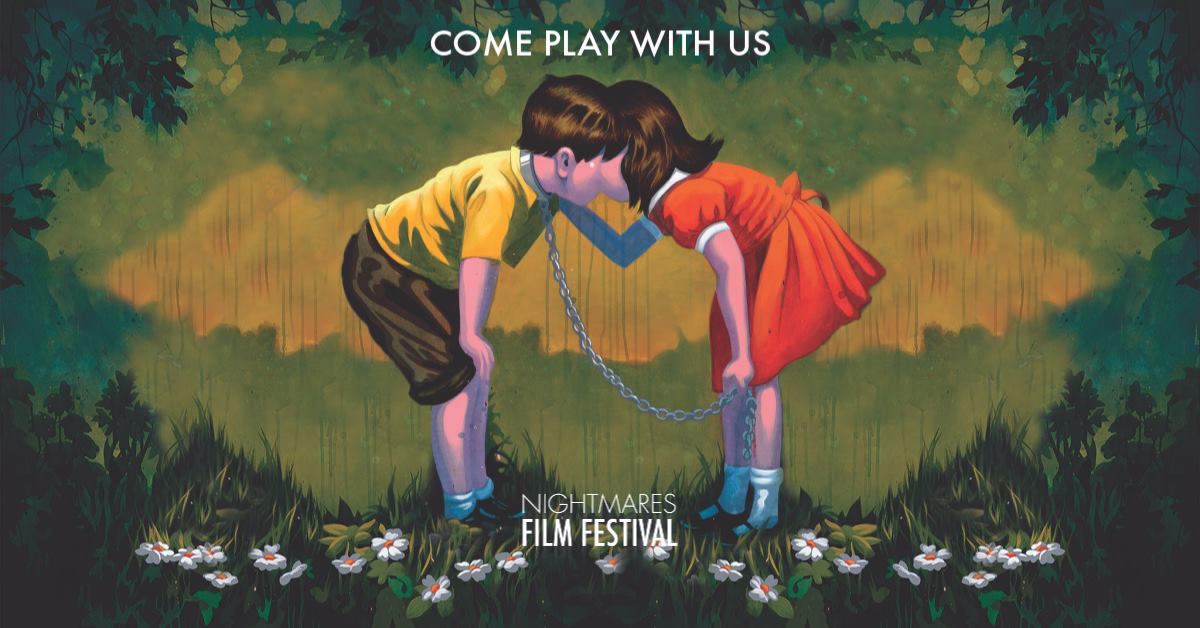 Four years later, sitting outside the Gateway Film Center at 5 a.m. and digesting the fest’s infamously intense “Late Night Mind Fuck” feature with similarly shaken friends, I see the error of my ways.

And it wasn’t catching the aforementioned “Mind Fuck.” If you go to Nightmares with any kind of pass, step into the theater and see how much you can take. Even if you tap out by the first penile injection, you’ll walk away with the warm and fuzzy tingling sensation that you’ve seen something you’re won’t see anywhere else.

That was my first mistake way back in sepia-toned 2016 — the programming. I only saw our block: Ohio Shorts. I remember the names of other movies playing, especially the nominees that rotated on monitors around the Gateway. I remember because I see some of those names streaming on Shudder now or burning rubber off the vendor tables at conventions. 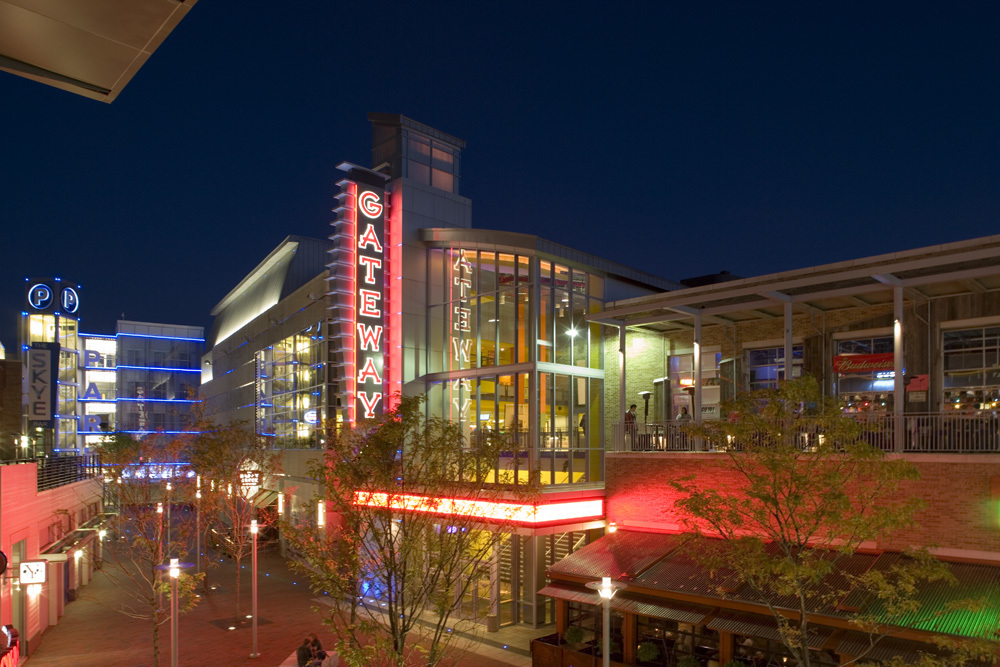 But I was timid. As much as I love horror, it scares me.

It’s right there on the tin, after all. Indie horror, especially, gets my hackles up. With studio movies, there’s somebody minding the farm. People with expensive haircuts have to make sure the movies are tame enough to play Parma. Indie horror is unfiltered id, as dangerous in possibility as the invisible beast in Forbidden Planet. It can take any shape, strike any nerve, and show you terrors previously believed unimaginable.

Then again, my kind of movies don’t call for gnawed fingernails. The first was a goofy comedy. Then a very personal monster movie. Then a less personal, but scarier monster movie. Now I’m back to a comedy, though it’s more serious if you scratch at the glossy finish.

Point is, since Year One, I’ve been terrified of fish-nor-fowling it, making horror that isn’t scary enough and comedy that isn’t funny enough. 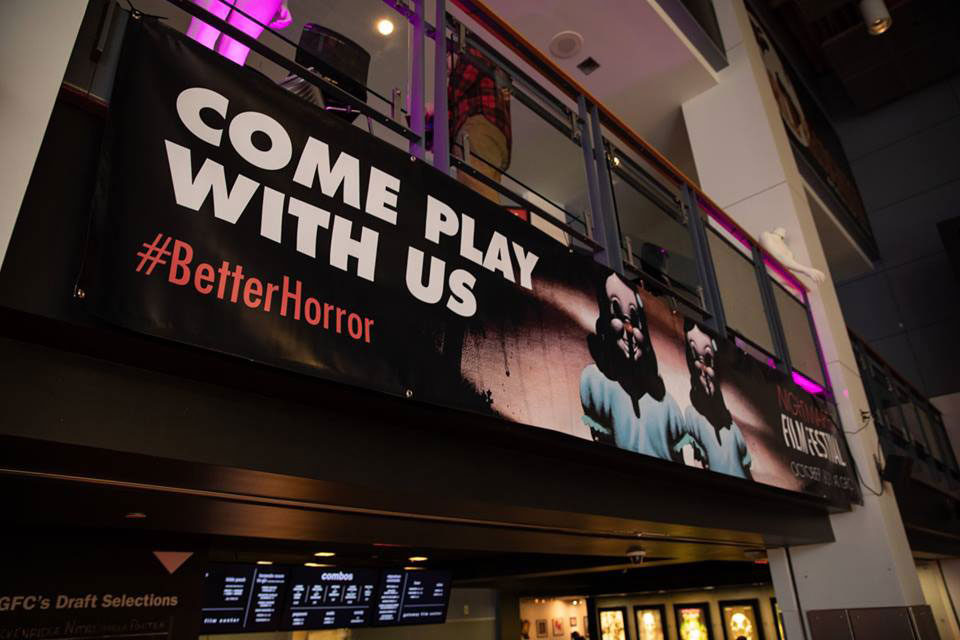 Thinking on it now, it’s the same fear in a different mask. Not just Can I Do It?, but Would Anyone Like The Stories I Want To Tell? and Would I Fit In?

Tough questions that should not be made the burden of any one film festival.

No acceptance or rejection should change anyone’s life. It can’t, unless you’ve already put far too many chips on the line. I didn’t have many chips period when I sent that first movie to Nightmares. But it wasn’t just accepted, it won Best Ohio Film.

Awards are not the most important thing in the world, but I do have to give them credit. They have a very pretty thing. The Night Mare. Like a chess piece from hell. It sits on my desk as a beautifully sculpted reminder of the people that take a chance on you just because they like what you’re doing.

It’s been a singular joy watching the Ohio blocks get better by the year and the winners doing a much better job communicating what it means than I did. 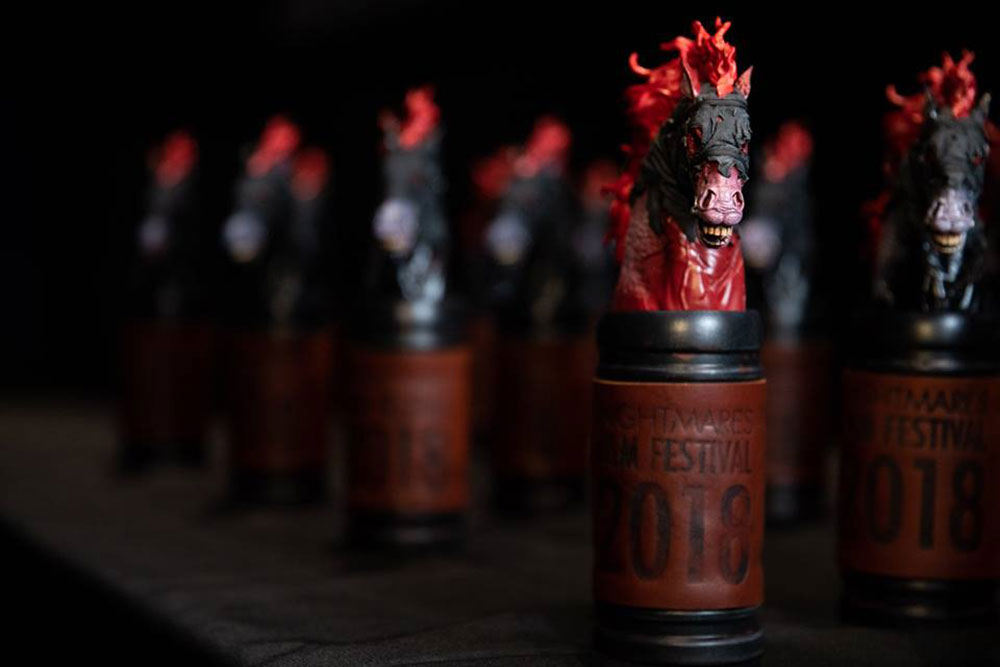 Wasn’t the award that kept me going, though.

After that first screening, a few people in the audience came up to talk to me. To say they liked it and wanted to see what I did next. More reached out on Facebook. Nightmares turned out to be the first and last screening of that movie, mostly down to my clueless from-the-hip submission strategy. But still, it emboldened me.

The second movie was over twice as long, not that I truly grasped why that’s a terrible idea if you actually want any festivals to program it. But more people, some of the same from the year prior, came up and said they dug it. Keep going. It, too, would almost never play again after that. But at least someone in the audience reached out just to play it at their own festival.

The third movie was (slightly) shorter. More of the crew came down. We stayed a few days. Met more people. An actor came up after our screening and (politely) asked to be in whatever we did next.

God help him, his twenty-foot-tall face played to a crowded house last Sunday. People clapped when the Dangerous Days production logo rolled in. Named for the first “real” movie I made in high school. Now projected at the Gateway Film Center, one of the best independent theaters in the country. 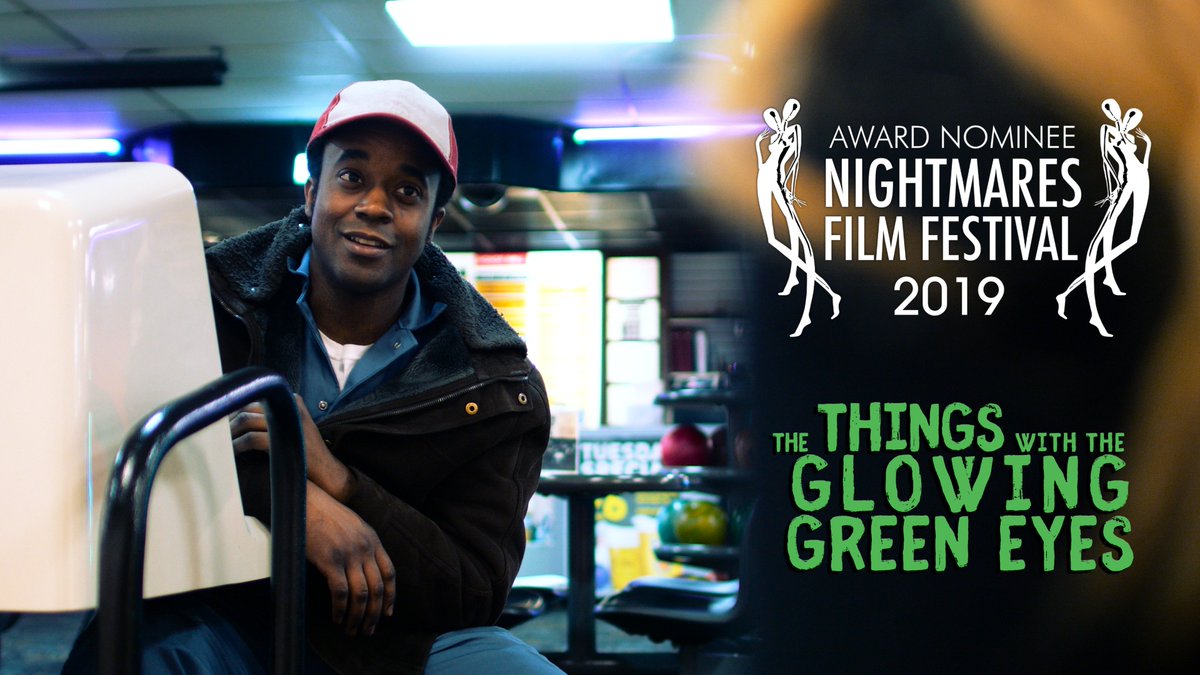 My first mistake was programming.

Had I seen more, I would’ve realized I wasn’t such a square peg after all. But my second, and arguably bigger, mistake was people. I didn’t mingle. I wasn’t around for it. I didn’t reach out over social media to talk movies. It never even occurred to me that I could be friends with some of those wildly talented names on the monitors. That I would be, eventually.

As you might’ve noticed, this is an awfully me-centric recap of Nightmares 2019. For that, I plead guilty. It’s more like a lesson or a love letter, to be honest. I’m just a guy from Cleveland who wears too many floral prints. 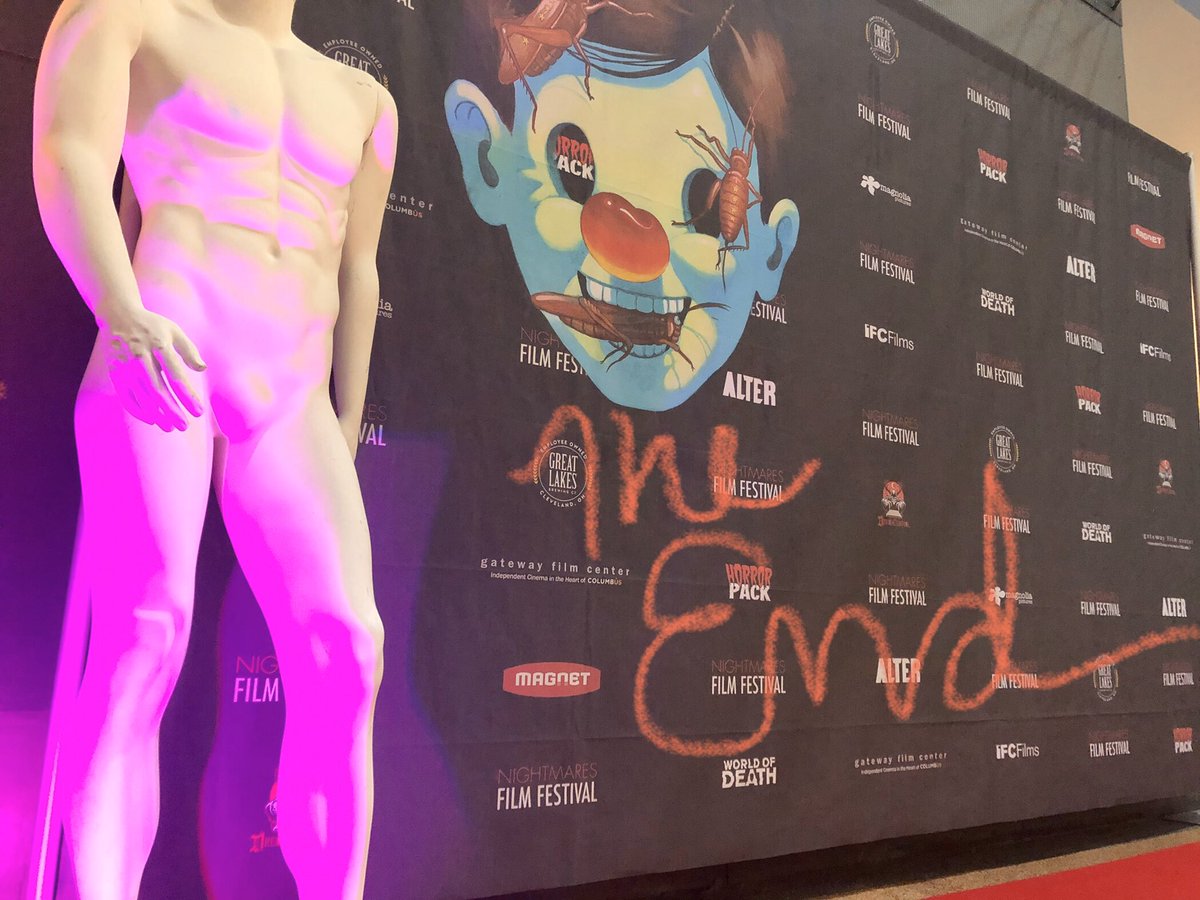 Here’s what I watched this year:

I could keep going, but that pretty well lays out the spectrum. All surprising and delightful in their own ways. And I got to know the lovely people behind almost all of them.

Morbidly Beautiful wanted to send a dedicated rep for the festival. I didn’t raise my hand because it felt like volunteering for homework at summer camp, and I couldn’t in good conscience give a review of any grade to someone with whom I’ve deliberated over the Neil Diamond section of a dive bar jukebox.

But if any of them or the rest of the Nightmares family is looking for reviews, send in those screeners. Tell them Jeremy sent you and they won’t even ask for the secret code. 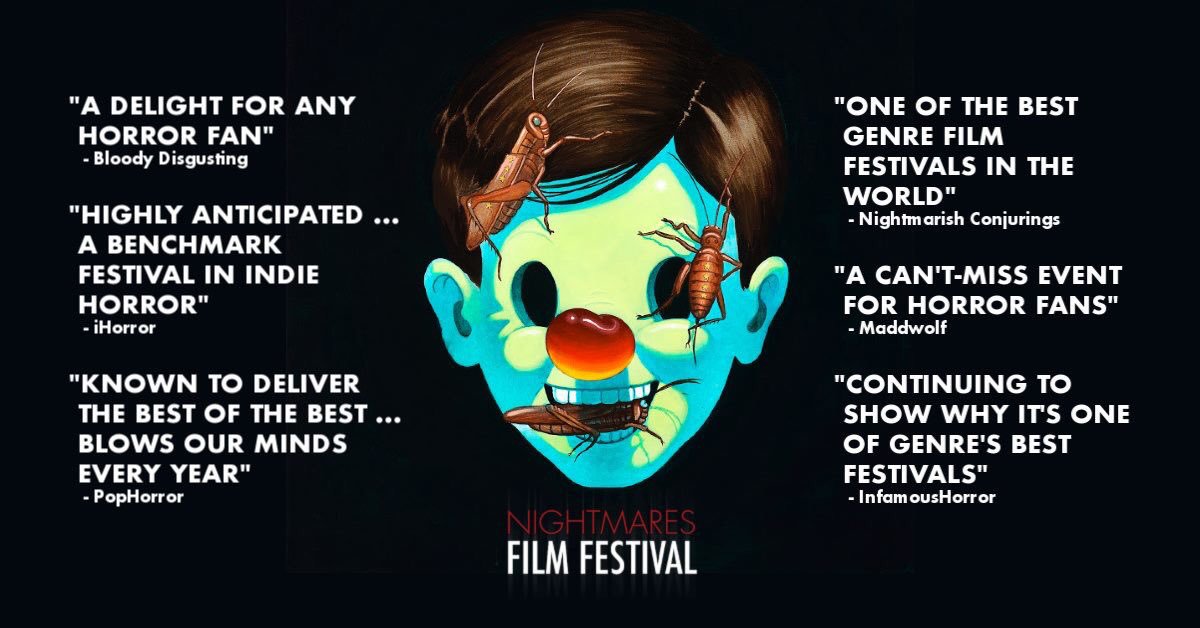 If I had to guess, most filmmakers have that question gnawing at them now and again: Can I Do It?

It’s been four years and it hasn’t left me alone. Difference is, now I have a whole bunch of people snapping me out of it.

Filmmakers, if your work is creepy, kooky, or altogether ooky, send it to Nightmares. Fans of things with similar adjectives, start making arrangements for next year. To festival directors Jason Tostevin and Chris Hamel’s great credit, there’s no better place to take the pulse of modern horror. 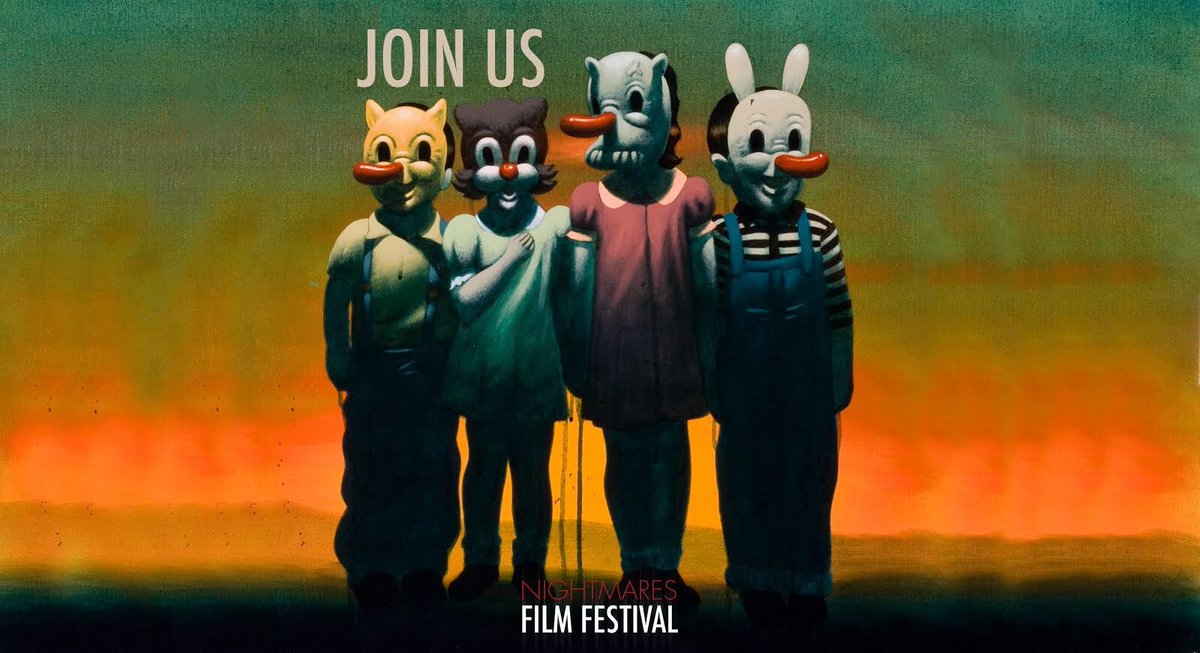