VFW grabs viewers and throws them onto a grimy roller coaster of crackling violence and gore with a pounding soundtrack, for a ride they won’t soon forget.

A group of aging vets sit around shooting the shit, taking shots and telling old war stories they’ve all heard a hundred times. Going to the titty bar comes up as an idea, a way to celebrate one of their birthdays. The VFW post may be a dirty, rotting hole in the wall bar. But dammit, it’s their dirty, rotting hole in the wall bar. And, like with each other, they’ll defend it to the death.

The cast who make up this group of men is a fantastic one. All of the actors do inspiring work, bringing something extra individually and creating a special dynamic and chemistry as a whole.

A short distance from the VFW, across 2 empty parking lots, trouble is stirring. $500,000 worth of a drug called ‘hype’ has gone missing from an abandoned warehouse, occupied now by a drug lord with a small community of addicts.

Across 2 empty parking lots is a different world — one of filthy, strung out survival and hopeless lives willing to do anything for their next fix. And one does as she jumps after some hype tossed over a railing, landing with a blood bursting smack as she belly-flops onto the floor. Meanwhile, across 2 empty parking lots, a young woman named Lizard runs with a backpack filled with the stolen hype, heading towards the VFW for cover.

An unknown war is coming. And the aging vets preparing to visit the titty bar are, instead, about to be drafted once again for battle. 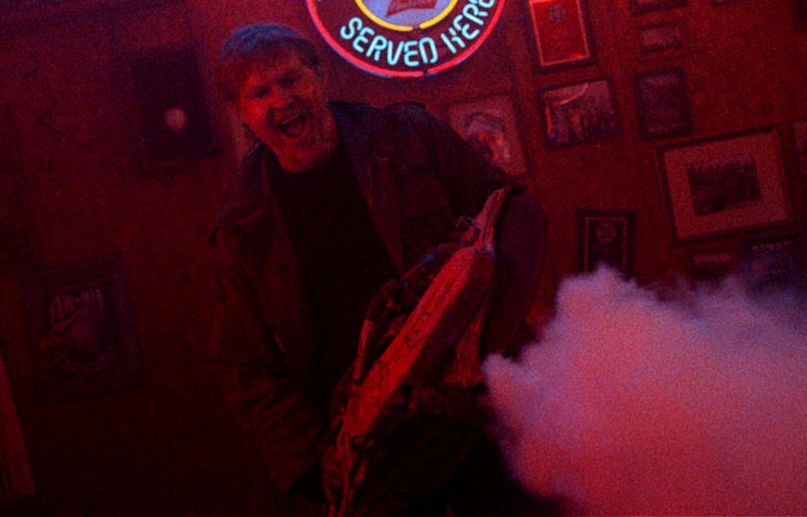 Director Joe Begos picks up where he left off with Bliss and handles the action in VFW with break-neck ferocity.

It’s a cranked up style that punctuates the quickness of violence when super-charged with adrenaline and driven by drug addled and money hungry people with no fear of consequence. On the other side, the group of vets are snapped back to their days of war, ready to fight back in an instant with a no-fear-of-death attitude once their beloved VFW post is invaded by Lizard (Sierra McCormick) with stolen drugs — followed by the thugs who want it back.

The army of addicts, as ordered by their leader and God-like hype supplier Boz (a perfectly scuzzy Travis Hammer), descend upon the VFW post with a crazed intensity. These are deranged, zombie-like beings with blackened veins growing back from their mouths, a side effect of the hype they so crave. What’s left of their fried minds are focused on nothing but more hype, more hype, more hype.

Special mention goes out to Dora Madison who plays Gutter, sister of Boz. Carrying over from Begos’ last film Bliss, she has a limited role here and steals every scene she’s in wearing a kick ass Mad Max-dominatrix costume and slicked back, pulled up cockatoo hair style. Madison is a lightning rod of an actress. Your eyes can’t help but be drawn to her.

The music score from Steve Moore shocks the film like a defibrillator, shooting a heart pounding energy through each scene.

It creates a beating heart to the picture that underlines the brotherhood of the vets, a soundtrack that infuses the “work hard, play hard” mentality of aging war vets that stick together for a sense of home and belonging. It’s their battle cry, the sound of the war that never ended in their heads. And they’re ready to fight.

Along with the alarm-colored cinematography from Mike Testin and Josh Ethier’s whip fast editing, these elements combine to create a fast paced and exciting story, an urgent fight for life where Death hangs in the background of each scene, having his pick of who to take next.

VFW is a gritty as sandpaper, filthy as a gas station restroom, neon-draped burst of violence that is as fun and energetic a movie as I’ve seen all year.

The cast is incredible, especially Lang and Sadler, the action is fast, brutal and gory, and the music thumps and roars. It’s an all out and unabashed love letter to action movies of the 1970s, 80s, and 90s sealed with a blood soaked kiss. VFW is an air punching experience and an absolute must see. I can’t wait to watch it again!

VFW screened as part of the Anomaly Film Festival in Rochester, New York, and was hosted by the historic Cinema Theater. This was the first year of the genre film fest. And after its very impressive inaugural lineup, I certainly hope it returns next year.