A lot of genres are thrown together in The Answer, but this disjointed concoction provides some solid b movie style entertainment 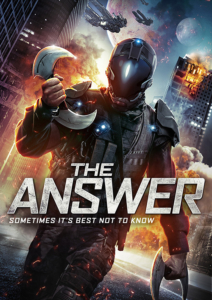 Although he has a basic job and pretty basic lifestyle, Bridd Cole (Austin Hebert) is more than content with what he has, which seems odd given he has a remarkable intellect. He prefers to remain under the radar and dislikes being in the spotlight. He is a good friend, even helping his buddy grab a promotion, but he doesn’t seem to mind if he never rises above his current station in life.

However, his “make no waves” lifestyle is about to shattered, when a strange package arrives for his mother, who has been deceased for over two decades. He is baffled when the shipment arrives, but he is wholly unprepared for when he returns home that same night to discover his place has been ransacked. But that’s not all, as his boss is also there and has been murdered. His date Charlotte (Alexis Carra) is shocked by all this and warns Bridd that things don’t look good for him if he notifies the police. As the two try to figure out this traumatic turn of events, they realize they’re on the cusp of an incredible, complex situation.

Now if Bridd wants to survive this ordeal, he will need to put his avoidance issues behind him, as this under the radar guy is now in a fight for his life!

The concept of blending genres can be a tough sell, since movies often struggle weaving two genres together, let alone more. But THE ANSWER sets out to mix up numerous genres, from romance to sci/fi to thriller to action and even a pinch of horror, which is no simple task and could have been a disaster. In the end, the result is better than I expected, but it does suffer somewhat from the thinly spread attention. I do think having a basic narrative was a wise choice, as it ensures the characters and story aren’t bogged down. This gets us where we need to be and things fall into place, so even with the split focus on genre, the story gets what it needs.

At the same time, the basic approach and focus on visuals/genre bending over story leaves us with thin characters. Some time is taken to give us background, but not enough to get a substantial investment. I appreciated the scenes that built the bond between the two leads, but sometimes it feels like too many ingredients water down the experience in this one. While the idea of taking this crazy ride with people we barely know is cool on one hand, on the other it is hard to care what happens when we don’t have that connection.

But given the ambitious approach taken and obviously limited resources, I think more works here than misses.

I found the cast of The Answer to be solid overall, but couldn’t really get behind Austin Hebert in the lead. I think this is partly due to the material, as he is given the role of a dull person and he plays it as such. I expected a little more evolution from dull guy to dynamic alien guy, but it never really happens. The character comes out of his shell a little, but not enough to allow much shift in performance.

So I’m not sure if Hebert is to blame or the role, but either way, it’s not an ideal fit. Especially next to Alexis Carra, who has infectious energy and steals most of the scenes. But again, she is given the quirky, charming, and outgoing role, so perhaps that is a factor. Regardless, she is a lot of fun to watch here even if her character doesn’t always make sense.

I did like the movie’s exploration of the two as time passed, showing us how they connect and bond. This was one of the movie’s main highlights to me, in fact. The movie focus in the two leads for most of the duration, so the supporting roles don’t have much screen time.

A low budget, indie produced sci/fi movie can be a real risk, as the genre can be more demanding than horror movies or standard dramas. Even minor elements in a sci/fi story can require special effects or unique prop creation, not to mention world creation and what not, so it can be tough. But THE ANSWER is smart in this regard, as it tells a sci/fi story, but keeps it reined in and mostly grounded. The sci/fi is mostly in the story, with a few little touches like the alien tech handcuffs and briefcase, as well as Bridd’s vision point of view. So it still has that indie feel, but it rises above its limitations in creative, smart ways.

At the same time, it does suffer from a slow pace and that reliance on not showing the sci/fi elements does sting at times. A little more flash and insight into the aliens could have went a long way, but I know resources were a concern. I admire indie filmmakers who show ambition and work around their limits, which is what we have in this case.

Despite some flaws, The Answer shows a lot of potential. And sci/fi fans who appreciate indie cinema should check it out.

The Answer, from High Octane Pictures, will premiere on VOD July 11, 2017.