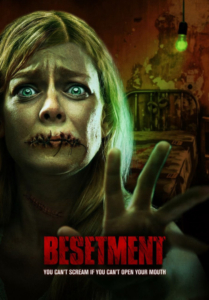 First of all, make sure no one spoils what happens in this movie for you. Go in completely blind, and you’ll be in for one hell of a ride! I won’t spoil anything in this review and will gently skirt around the most shocking moments so you can read this.

This movie is INSANE.

Besetment, written and directed by Brad Douglas, is an incredible first film out of the gate for this director. Seriously, this guy is a natural at this!

Amanda is a young woman who lives at home with her drunk of a Mom. All she wants to do is find a job and get out of the house, but without her GED she’s running into problems. Luckily, she receives a call from the Oregon Hotel offering her the chance to work and live there for free. She jumps at the chance and heads out to the small town to start her new position. And that’s all I’ll say…

Let’s talk about the acting first, because everyone in this film does a standout job. 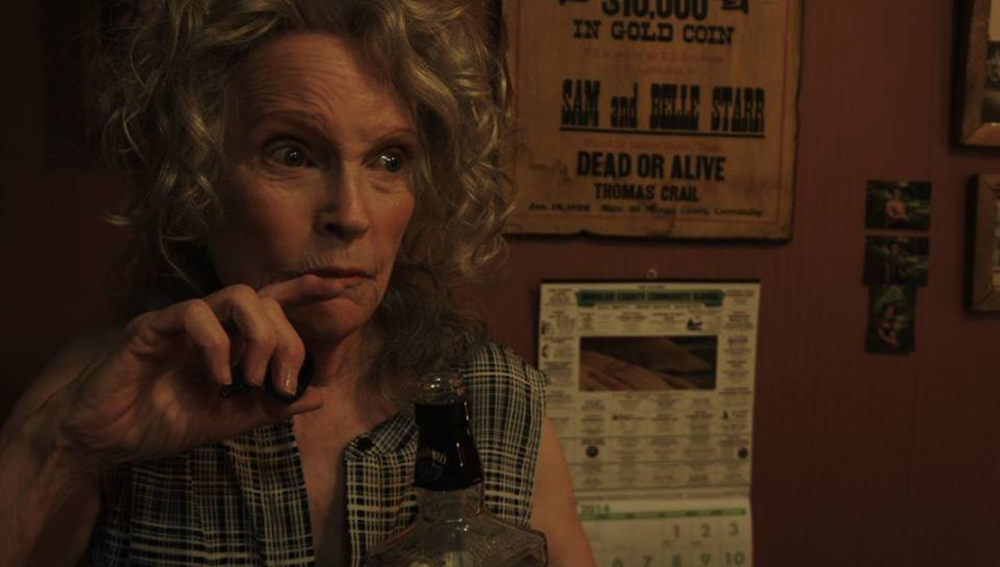 I first want to bow down to Marlyn Mason, who plays Milly, because she is so incredibly captivating and terrifying — everything you need in a horror movie performance. This woman was incredible, and I was terrified and amazed by her in the same breath. Think Pamela Voorhees on speed.

The lead of Amanda is played by Abby Wathen, whose doe eyes and genuine performance pull you in immediately. You are rooting 100% for Amanda to get through this terrifying ordeal. And, to her credit, she puts up one hell of a fight.

Michael Meyer plays Billy with respect and patience, and your heart does go out to this confused and sad character throughout. All the background characters in the town are spot on for a small, backwoods town, and the sub characters like Brad, the Sherriff and the Deputy are so well thought out and just as interesting as the leads.

There are some gorgeous wide shots in Besetment that captivate how lonely this small town is, and the opening credits pay homage to American Horror Story. Keep an eye out during those credits because all those scenes play out at some point, and it’s really fun to spot them. Douglas can handle a camera really well. While the coloring choices confused me sometimes, ultimately this is better than some directors’ second or third movie.

I won’t go into it, and I’m trying to figure out a way to walk my way around this. Remember in Don’t Breathe, that scene with the turkey baster? Take that scene and multiply it by 1000, and that’s how you feel watching this story play out. Run time is just over an hour, and quite frankly the pacing is perfect.

We start off slow, but not annoyingly slow. It takes its time introducing the town and the characters. And then, when you least expect it, the story takes a 180 and smacks you in the face. There were some scenes where I was screaming and couldn’t watch…but also couldn’t help but watch. There were scenes where I was cheering out loud. I spent the whole second half of the movie on the edge of my seat.

I can’t talk highly enough of this movie, but I don’t want to ruin any of the scenes so this review is quite hard to write. Basically, you MUST watch this film! While none of it is necessarily original or groundbreaking, Besetment is done so incredibly well that it might actually be one of my top ten favorite films of 2017 so far.

It harkens back to some of those weird and violent horror films of the 80s like Mother’s Day or Motel Hell. Moreover, Besetment is actually pretty important for a modern day horror film as a result of some of the topics it touches on — and the fact that one of the main leads is a woman in her 70s.

When you finally think Besetment is done with you, it hits you upside the head with a Halloween style surprise ending. I promise you, if you watch this, you will not be able to stop talking about it. Why are you still reading this? GO WATCH THIS MOVIE!