On the surface, “The Gatehouse” is a fantasy horror film about a haunted gatehouse near an ancient forest, but it’s firmly rooted in powerful family drama. 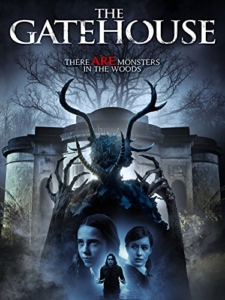 An underserved sub-genre of Horror is the fantasy/myth genre (think along the lines of PAN’S LABYRINTH). But writer/director Martin Gooch tries to fill that void with THE GATEHOUSE.

Does Gooch succeed or fail with his movie? Let’s dig into THE GATEHOUSE and see what treasure we might find.

Jack Winter (Simeon Willis), a recently widowed and down-on-his-luck writer, moves into a gatehouse at the edge of an old forest with his daughter Eternity (Scarlett Rayner). While Jack tries to pick up a writing job, Eternity spends her days exploring the forest with her shovel, digging for elusive treasure. Eternity does find her treasure, but something in the forest wants it back and will stop at nothing to reclaim it.

THE GATEHOUSE is held together by the fantastic chemistry between actors Simeon Willis and Scarlett Rayner.  Their on-screen bond as father and daughter is heart-warming and moving.

If the movie was about Jack and Scarlett trying to bond and come together after the death of the mother, and dealing with Jack’s struggles with unemployment, this would have been a very good film.  The horror element ends up detracting from the part of the movie that I found myself most riveted by.

Gooch fills his movie with jump scares, which are effective, but don’t move the story forward.

For instance, a spirit of the forest chases down characters who are essentially “red-shirt” characters — only there to be taken out to show the power and/or danger of the entity.  There is also a completely out-of-tone scene with a man in an insane asylum. By itself, it’s a glorious piece of horror camp driven by a stereotypical exposition character. Like the jump scares, the scene works by itself but is out of place within the context of the story.

In the end, Martin Gooch has created a compelling melodrama surrounding a grief stricken, struggling to get by father, and a daughter trying to deal with her feelings of loss and misdirected anger.  The horror elements, while effectively done, feel thrown in and are the least memorable parts of THE GATEHOUSE.