Clowntergeist looks like it could be a wickedly fun slasher and sounds like a campy good time, but it sadly fails to deliver either real fun or fear 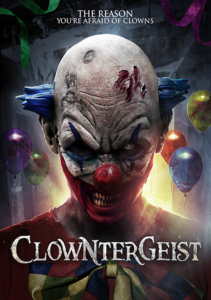 The Greek axiom “know thyself” was inscribed on the wall of the ancient Temple of Apollo at Delphi. Since then, these famous words have been adopted and adapted by many famous thinkers, from Plato to Benjamin Franklin to Ralph Waldo Emerson, primarily because they speak to the very nature of human existence. This ancient axiom implores the reader to fully understand the contents of one’s head and the mettle of one’s heart prior to interacting with and modifying the world around them.

Every great film is a product of a director with a clear vision of what they wish to portray, how to execute their ideas, and what feelings the images they record will invoke in the audience. Such directors are not omnipotent, and yet they know themselves in a way that enables them to endow the written word with life, and allows these ideas to transcend the page and breathe on the screen. With that said, Clowntergeist, directed by Aaron Mirtes, is an inherently uncertain film that definitely suffers from an identity crisis. 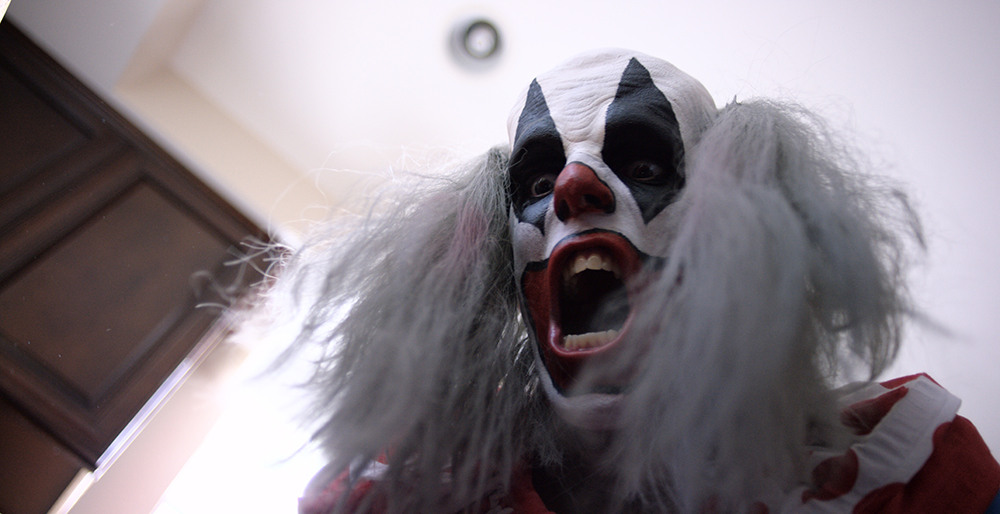 Firstly, Clowntergeist seeks to capitalize on the zeitgeist of our collective obsession with our fear of clowns.

How did these once beloved circus performers who formerly put smiles on the faces of children morph into ominous painted demons who inhabit our nightmares? Who could even imagine hiring a clown nowadays for a child’s birthday party without the extreme apprehension that, upon the appearance of said clown, some children (and perhaps more so some adults) will be reduced to a quivering mass of tears?

Perhaps an individual like serial killer John Wayne Gacy, who dressed up as “Pogo the Clown” for fundraisers and parties, gave clowns a bad rap with his habit of murdering men and burying them under his floorboards. And who could forget the over-the-top-cosplaying-creepy-clown-enthusiasts who sprung up like weeds all over the world last year, intentionally frightening many unsuspecting passers-by, who would subsequently flee in terror (with the ubiquitous cell phones recording every moment for posterity, of course—#hoax)? 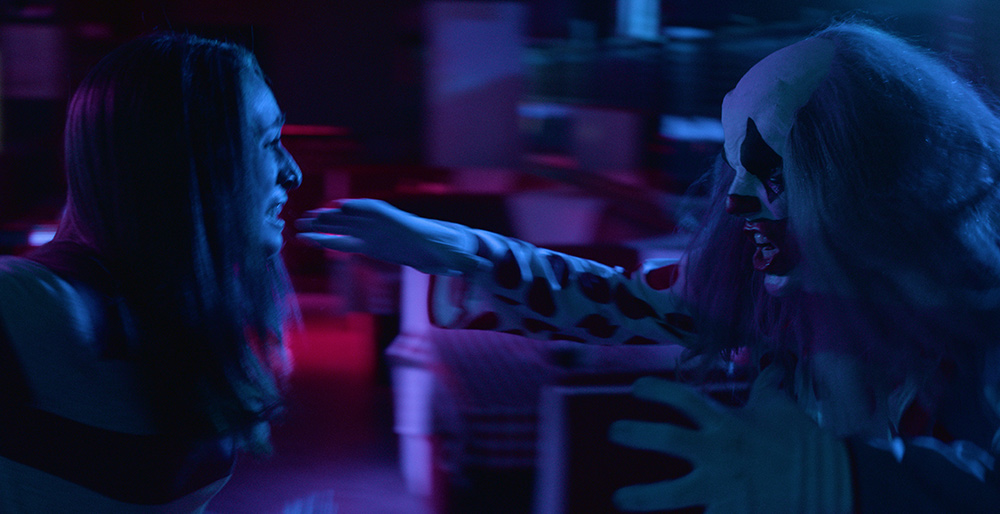 Of course, the viral marketing will not let us forget that the remake of Stephen King’s It will be hitting theaters this September, marking the return of Pennywise, everyone’s favorite sewer-dwelling clown who has a penchant for giving kids subterranean swimming lessons.

The demonic clown in Clowntergeist is named Ribcage (for his proclivity for ripping open people’s ribcages to get at the tender vittles contained therein). His face is painted white, with blue diamonds painted around his eyes, while his nose and mouth are highlighted by bright red. Long grey hair cascades down from the sides of his head, framing his grinning visage. He is dressed in a loose-fitting outfit that is part polka-dotted and part solid blue and his feet are encased in over-sized red shoes, a la Ronald McDonald. 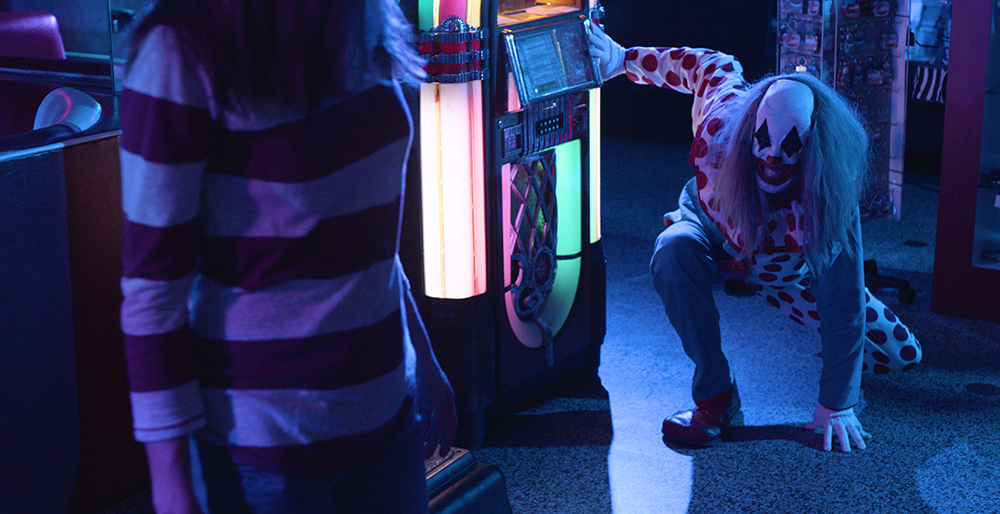 But, whereas Pennywise is an undeniably chilling monster, Ribcage elicits nary a shiver.

The reason can be found in the director’s vision and approach. Pennywise is shot from unconventional angles so as to unsettle the viewer, he is usually shown in shadow so that he seems to always be lurking, and he often times exists in dark, dank and altogether uninviting settings. Unfortunately for Ribcage, director Mirtes shoots his villain in ways where the mystery of the creature is revealed in full. In one scene in particular, we see Ribcage stalking his victims, slowly executing a zombie-like shuffle, all the while bathed in full daylight, looking very much like a dude in a clown get-up. Mirtes does try to inject some cheap jump scares by having Ribcage appear and disappear in quick succession, but to minimal effect.

Still, I can’t pin all the blame on the director—Eric Corbin’s portrayal of Ribcage leaves much to be desired. At times Corbin walks slowly and stiffly like the Tin Man sans oil, while at other times he lopes about on all fours like an ape (Andy Serkis eat your heart out!). Corbin also emits an obnoxious hoarse raptor-like squeal, which seems to be Ribcage’s battle cry. Long story short, if your monster is not sufficiently monstrous, both in appearance and behavior, your fear to unwanted belly laugh quotient will be skewed more to the latter than the former. 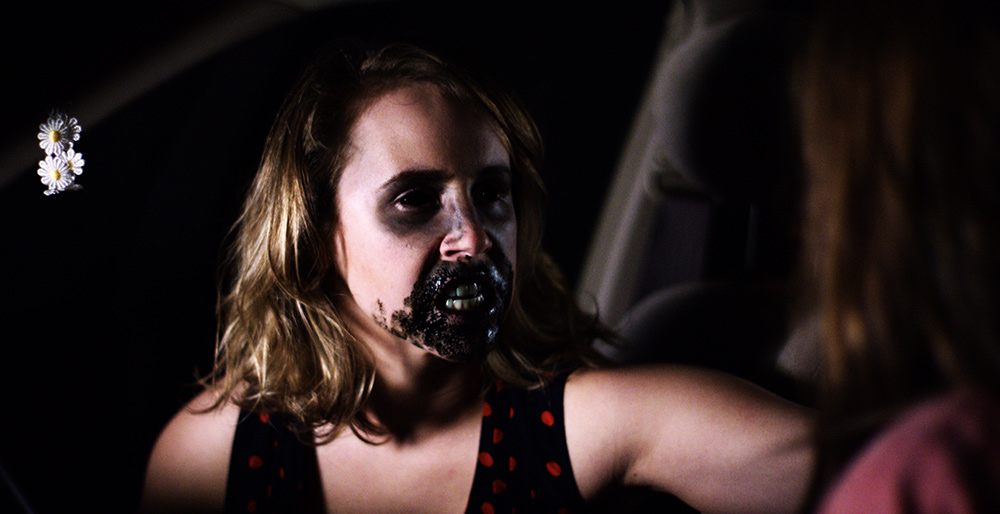 Now, I understand that everything is derivative, and that coming up with wholly original ideas is impossible, but while watching Clowntergeist, you will recognize pretty clear connections to other well-known horror movies and stories.

For instance, the film opens up with a modified version of the urban legend about the creepy “clown statue”. In the original story, a babysitter notices a clown statue that keeps appearing in different areas of the house. When she calls the parents, they tell her there is no clown statue. Turns out it was some crazy little person dressed like a clown who had escaped from the mental asylum and was hiding out in the house.

This film also borrows slightly from the urban legend about the girl who liked to stick her hand off the side of her bed so the dog could lick her fingers, which gave her a sense of security while she tried to sleep at night. In the original story she keeps doing the hand thing, but later that night she discovers the dog isn’t under the bed. She goes downstairs to get a glass of milk and upon opening the fridge she sees her dog’s dismembered head with a note that reads “People can lick too.” 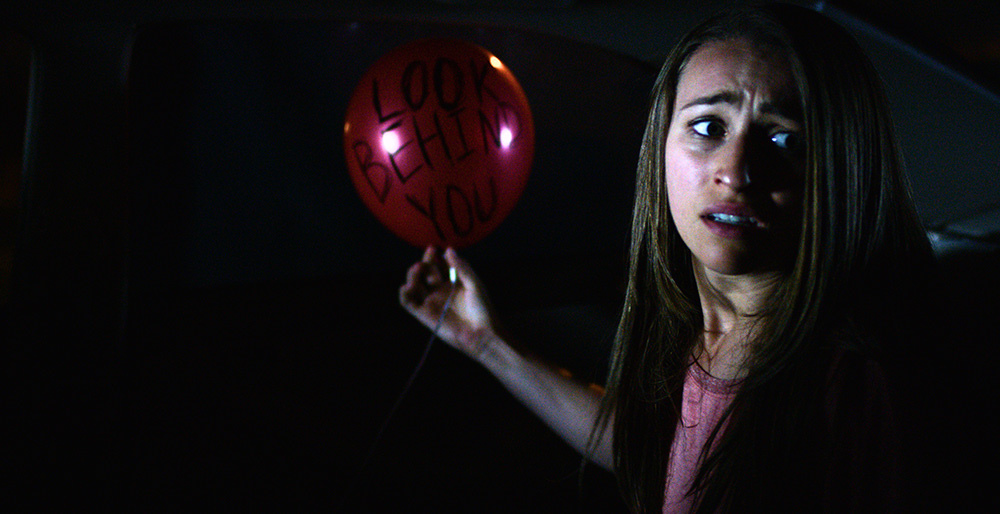 The movie doesn’t go as far as the urban legend, but it does something somewhat similar. One of the main plot devices is Ribcage’s use of—drum roll—RED BALLOONS! Pennywise called—-he needs his signature calling card back. Anyway, Ribcage writes on the balloon with a permanent marker the date and time that he will kill the recipient—and no, it’s not in “seven days”!

The performances of the actors was akin to watching a stage play in the sense that in live theater actors tend to be a bit over-the-top in their expressions, motions, and reactions, so that their performance can translate from the first row all the way up to the last row of the balcony. Brittany Belland, who plays our clown-adverse protagonist Emma, spends the majority of the movie whining in fear, expressing her self-doubt and pretty much causing the death of her friends through her inaction. 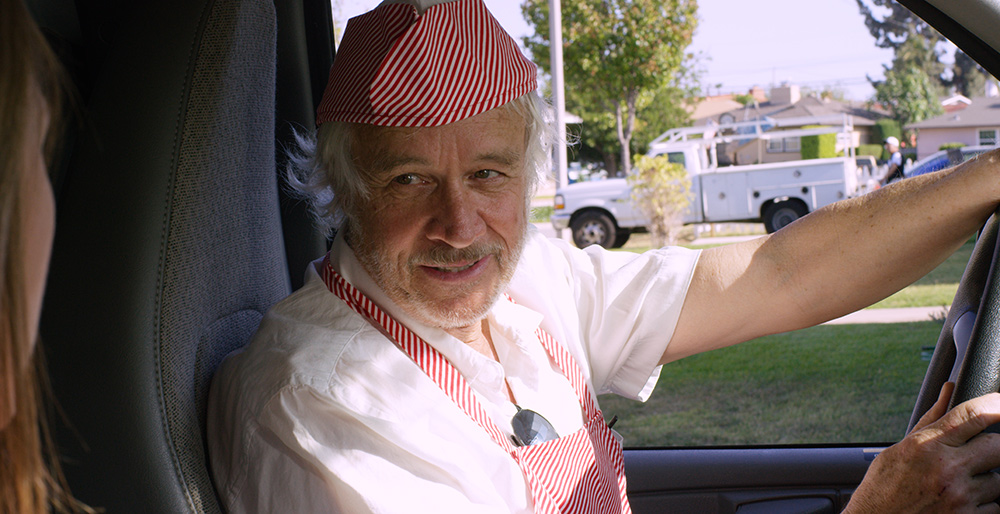 Her buddies Heather, portrayed by Monica Baker, and Jonah, portrayed by Sean Patrick Murray, spend most of the movie hamming it up (though unintentionally) until their eventual demise. The only other significant character besides Eric Corbin (Ribcage), would be Tom Seidman, who plays Pops, a kindly old man who drives an ice cream truck. His performance, like all of the other actors, is odd, and the writer attempts to give him some depth via a twist in the third act, but it’s no Sixth Sense M. Night Shyamalan masterstroke.

In any case, this Clowntergeist would have ultimately worked better as a short than as a full-length movie.

If you went purely by the trailer, you’d think this would be a rival to 2014’s surprise hit Clown. The true identity crisis of this film is that it takes itself way too seriously. Not for nothing, but with a name like Clowntergeist, it’s just screaming for a more campy treatment, a la Killer Clowns From Outer Space. Instead, the laughs do come, only at the film’s expense.

Written by The Black Cat