“Greener Grass” is a hilarious, absurdist black comedy about the crippling desire to fit in at all costs and the futile pursuit of perfection.

Greener Grass, the new black comedy from improv comedians turned independent filmmakers Jocelyn DeBoer and Dawn Luebbe, is unlike anything I’ve ever seen — and I haven’t been able to get it out of my mind.

It’s a biting and uproariously funny satire on the American dream, where happiness always seems one lifestyle change away — whether it’s a new pool or a new baby — and every major event, from birth to death, is just another chance to earn a brief moment in the spotlight.

Despite the kooky sub plot about a possible serial killer loose in an otherwise picture-perfect community, and POV shots from a heavy breathing stalker, Greener Grass is not a horror film. But that’s not to say there’s not plenty of disturbing — albeit side-splittingly funny — goings-on to delight in.

Taking place in a kind of Burton-esque, middle-class Suburban nightmare, the film centers around two friends and neighbors, Jill Davies (DeBoer) and Lisa Wetbottom (Luebbe) — bored and self-absorbed housewives who pretend to be close while they passive-aggressively compete with each other for the “perfect” life. In a hilarious and disturbing opening scene, the two women watch their kids play soccer from the bleachers. After talking for a bit, Lisa abruptly turns to Jill and says, “Oh my gosh, I didn’t even notice. You have a new baby.”

It’s said with as much half-hearted regard as a friend complimenting another friend’s new haircut — as if a baby is just a new accessory you get to spice up your look. And Jill, desperate to please, treats her child with the same casual disregard by immediately offering to give the baby to Lisa to raise as her own.

We quickly learn everyone in this warped world of manicured lawns, picket fences and golf carts is just going through the motions. 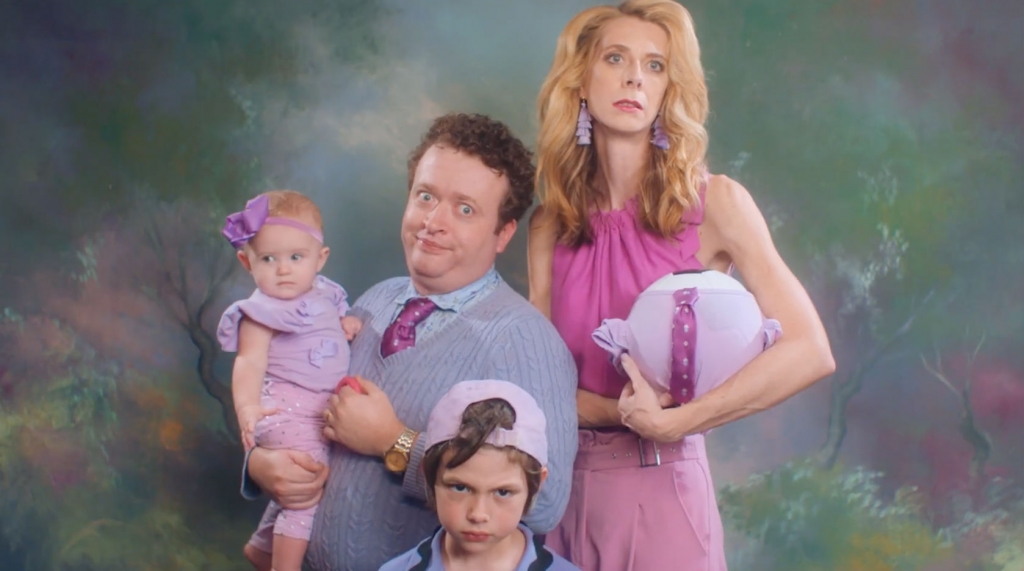 They are all pretending to be happy and trying exceedingly hard to convince everyone around them how great his or her life is. No one seems to feel anything real.

Early on in the film, there’s an extended, painfully awkward make-out scene where we meet Jill and Lisa’s husbands, Dennis (Neil Casey) and Nick (Beck Bennett). The two couples kiss in a passionless, “this is what we’re supposed to do to prove we’re in love” kind of way. The absurdity of the situation is amplified when the couples finally stop long enough to realize they’ve been kissing the wrong partner.

The people in this Stepford-like, Instagram-filtered society are polite to the point of insanity, obsessed with perception, and desperate to be validated. Joy and suffering are experienced through the same monochromatic lens, filtered for public consumption and devoid of all real emotion. Grown women wear braces over their perfectly straight teeth, because nothing can ever be too perfect.

Expanded from their 15-minute short film, writer/directors DeBoer and Luebbe manage to take a pretty thin plot and squeeze maximum merriment out of the film’s 90-minute run time.

Admittedly, this is a very specific type of irreverent and almost uncomfortably odd comedy. So it won’t be everyone’s cup of tea. But for those who appreciate their humor a bit off the beaten path, you’ll likely find this film an irresistible delight.

Greener Grass is wonderfully weird and consistently hilarious. But what I think I loved most about the film was the way it somehow manages to be both indescribably preposterous and remarkably relevant — with a well-aimed message about excess, identity, and the fabricated, pseudo-lives we lead on social media.

With its off-kilter dialogue, scene-stealing performances, phenomenal production design and excellent chemistry between the two leads, there’s so much to love about this original and zany affair.

Greener Grass is being released by IFC Midnight on October 18th.