The satisfying Hitchockian thriller “Midnighters” shows what happens when we’re forced to face the truth of who we are and the consequences of our actions. 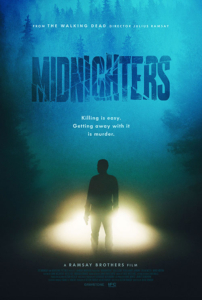 What kind of person do you think you are?

Have you ever thought about how you would react if you happened on some stolen money? Would you be a good person and split it with your family, or turn it into the police? Or would greed take over, causing you to backstab the ones you love? What if you hit a person while driving drunk? Would you take them straight to the hospital, even though you’d most likely go to jail? Or would you sacrifice another life to save your own?

In the very Hitchcockian influenced thriller, Midnighters, we find out people are not always who they seem — discovering what greed and fear can make an average couple do when under pressure.

In Midnighters, we meet Lindsey (Alex Essoe) and Jeff Pittman (Dylan McTee), tipsy after a New Year’s Eve party hosted by Lindsey’s employer. Driving home on a remote country road, they crash into a man who later dies in their car from his injuries. (Not sure why he was walking down the middle of the road but… sorry I digress.) In a panic, they change their decision to take him to the hospital — turning around and driving back home to sober up and figure out what to do.

Not a great decision, but they are drunk, right? It would be vehicular manslaughter. This scenario is pulled right out of the news. There have been too many cases of this really happening, and it seems most people rarely make the right choice.

Back at their New England estate, which is under restoration, they discover they lost a license plate during the accident. While Jeff goes back to get it, Lindsey showers, leaving the dead body in the garage. In the meantime, Lindsey’s problematic sister Hannah (Perla Haney-Jardine) comes home from another party.

From that point on, the tension builds rapidly and things just snowball downhill fast. The great new year Lindsey and Jeff promised each other was not in the stars. This is on top of their already strained marriage.

Jeff, an unemployed failed ball player, has left Lindsey to be the sole breadwinner for too long. This, combined with the pain of Lindsey’s difficult childhood, the fact that her troubled sister is staying with them, and the chaos caused by a home in shambles, means the stress level was already very high — even before the most recent tragedy.

Barely making it day to day, while they renovate their vintage house, this is not the type of incident that will bring any of them closer together. And the problems just keep coming. The guy they left in their car for dead? Of course, he isn’t…AND he has their address in his pocket. Why was he on the way to their house?

In the morning, the couple receive a visit from the local police and a creepy guy claiming to be Detective Smith (Ward Horton). But he is absolutely not what he appears to be. In fact, it seems he is connected to both the dead guy and to Lindsey’s sister Hannah. What?

This is not a man that will leave until he gets what he wants, and he will do whatever he feels is necessary to get it.

Midnighters is the debut feature film of TV editor/director Julius Ramsay (The Walking Dead, Scream: The TV Series) and his brother, Alston. Julius worked on some of the most amazing episodes of TWD, and he has a great eye for the horror/thriller genre!

The movie could use a few tweaks, but not much. There are some underdeveloped characters and plot points, but Midnighters still has enough to move it forward. My only desire would have been to really understand the motive for some of the characters’ decisions, possibly understanding more about their backstories — especially Lindsey’s.

I thought the acting was strong and believable.

I have loved Alex since seeing her in Starry Eyes. She is a powerful actress, who is incredibly good at playing complex characters who have a whole other person living right under the surface.

Dylan McTee was awesome at being the husband we hate, but kinda feel sorry for. He has some good scenes with Lindsey’s sister Hannah. Perla Haney-Jardine has some horror experience, having been in Kill Bill: Vol 2 and Dark Water, and she did great this time around, too.

The absolute best parts of the movie are when the characters of Lindsay and Detective Smith are together. The dynamic between those two is phenomenal! Lindsey is so deep, so secretive. She seems vulnerable, but never totally weak. There is so much more to her then her husband or sister will ever know. Her experience with Detective Smith brings out a stronger Lindsey, a darker Lindsey, a survivor.

Ward Horton (who you might remember from Annabelle), plays the evil and menacing “Detective”, and has the craziest cold blue eyes. He scared me to death! I would not want to want to wake up wrapped in duct tape with that guy ready to torture me. What I love about their relationship is how it all flips around. These two made the movie for me. I never thought I could say I enjoyed torture this much!

In Midnighters, we find that people in general don’t want to deal with the consequences of their actions, no matter what they think.

This face-paced crime-thriller is a fun watch, as we follow the decisions the characters make at each turn. It’s a tangled Hitchcock-style web full of suspense, violence and reversals of fortune. Everyone has some sort of secret and eventually inflicts bodily harm on someone.

Even though it’s not perfect, it’s a terrific film, with a great twist, and I think both thriller and horror fans will enjoy it.

Click here to find out where you can watch MIDNIGHTERS, beginning March 2, 2018 (in theaters and VOD).

All photos courtesy of IFC Midnight.