Posted by:
Tags:  documentary He-Man Power of Grayskull The Master's of the Universe

“Power of Grayskull” is a loving tribute to the He-Man phenomenon — full of fascinating stories and insights that will make you want to be a kid again. 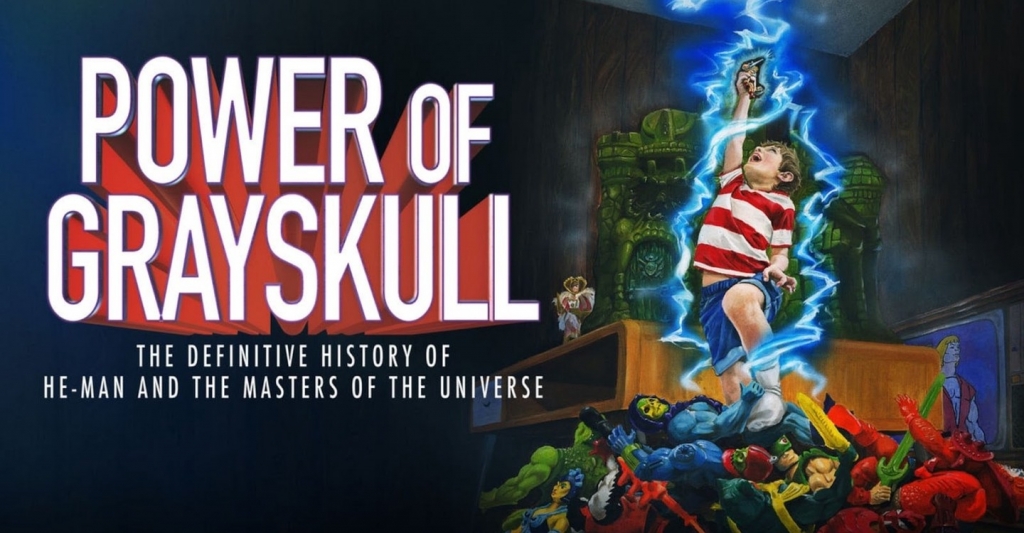 When I heard there was a documentary being released laying out the definitive history of He-Man, I knew right away that I had to get my eyes on it as soon as I could. As a kid, I loved the good vs. evil of the story-line — how He-Man signified pure strength and fought for what is right, while his nemesis Skeletor embodied the corrupted, power-hungry villain.

I loved the dark, fantasy setting of Eternia, the hollow, yellowed skull head of Skeletor, and the two swords needed to control the skull faced, ancient looking Castle Grayskull. It captured my attention and imagination as a kid. And when I sat down to watch Power of Grayskull, my love for He-Man and the Masters of the Universe rose up within me as if it never left.

I immediately got swept up in this devoted and well researched love letter to my favorite childhood toy.

What really stands out the most about Power of Grayskull are the interviews from the original team behind the creation of He-Man. But it’s not just the information these people discussed that I found compelling, it was the manner in which they discussed it. Every person looked back at He-Man and their part in it with a loving fondness that put a big smile on my face.

It made me feel happy to see that these people, although working for a giant toy company like Mattel, took great pride in what they created and genuinely wanted to design a well detailed toy surrounded by world building mythology.

Some of what the Power of Grayskull delves into in regards to production and design of He-Man were very surprising details that I never thought a toy company would think of. An example would be the foot placement of He-Man being at an angled out stance instead of simply standing straight up facing forward like most other toys on the market. This put the action in ‘action figure’ by showing these figures were ready to fight.

The figures were larger scale, eclipsing the popular Star Wars toys from Kenner, and featured a muscled, 3D look. Another interesting bit of info is the included accessories, such as an ax, were inspired by the accessories that came with Barbie dolls. Who knew?

While the creative and production process is told in great detail, the film also mentions the impact He-Man had on the minds of children.

The popular catch phrase as He-Man lifts his sword, “I have the power,” was meant, quite literally, that kids had the power. It was a confidence building aspect of He-Man that was more psychological than anything. This power giving phrase let kids know that, while they were defending Eternia against Skeletor, they didn’t have to listen to their parents or any other adults. He-Man put the kids in control unlike any other toy on the market, all with a simple, yet genius and quite literal catch phrase.

With all its success, He-Man wasn’t without controversy. There’s a fascinating segment on the creation of She-Ra, He-Man’s twin sister, as an alternative to Barbie and how she was developed. The backlash against the violence of He-Man also hindered the development of She-Ra. It was suggested by psychologists and Mattel higher ups that She-Ra shouldn’t necessarily fight and portray violence, but rather do ballet-like moves that people would happen to get in the way of and get hit.

These behind the scenes insights are in great abundance throughout the film and give the creative journey of He-Man great depth.

One last thing that deserves to be mentioned is the awesome segment that works as a mini doc exploring the feature film, Masters of the Universe. Interviews with stars Frank Langella and Dolph Lundgren add great weight to this segment. It’s fascinating watching the effort and care that went into this film that is largely considered a cheesy mess.

The makeup, prosthetics, costumes, and set design were all carefully considered and constructed with the utmost attention to detail. Great behind the scenes stories and information is given about the making of Masters of the Universe, and while not great, the film is not without its charm. The incredible talent and effort that went into creating the look of the film is true cinematic art, even if the finished whole is considered much less.

POWER OF GRAYSKULL worked extremely well in telling the story behind the He-Man phenomenon in a loving way with countless interviews and behind the scenes stories. But it also worked as an endearing tribute that made me want to go back in time to being a kid in the 1980s so I can re-live and experience my love for He-Man all over again.

That’s the best compliment I can think to give Power of Grayskull. After all, isn’t that what a documentary like this is supposed to do?