Nena Eskridge’s Stray is a chilling psychological drama with a powerful performance from Gabrielle Stone. 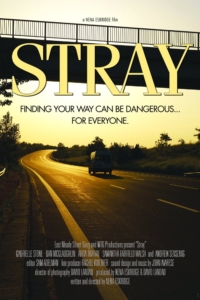 In many ways, Nena Eskridge’s Stray is a deceptive film; initially, the picture’s bucolic setting, roaming farm animals, and other brightly-lit scenes seem to embody all the clichéd qualities of a Lifetime movie. But when a moment of surprising violence occurs in the exposition, audiences quickly realize that Stray is a dark and sinuous movie, filled with believable characters struggling to find their place in the world.

Starring Gabrielle Stone as Jennifer and Dan McGlaughlin as Greg, the film is well-written and acted, a strong psychological drama that maintains an intensity throughout the majority of its scenes.

The “stray” in the title, Jennifer is searching for a home—a place that she can call her own, a place of friendship and employment—and maybe even love. But a cold bitterness lurks beneath her attractive surface, a frightening duality that Stone portrays well.

When Jennifer gets a job at a bar in the quiet town of Chestnut Hill, she quickly befriends the owner, a mild-mannered guy named Greg. While Greg takes a liking to Jennifer, Greg’s fiancée Sarah (Samantha Fairfield Walsh) is immediately wary—and with good reason. Jennifer quickly attempts to take control of the work environment and of Greg, and both have disastrous results.

As the film slowly reveals her character’s tragic backstory, audiences come to view Jennifer as a broken woman, determined to escape her past no matter the cost. With similarities to ‘Fatal Attraction’ (1987) and ‘Single White Female’ (1992), ‘Stray’ wears its influences on its sleeve, but the finished product remains noteworthy. Murder, nightmares, a disturbed father, a troublesome pregnancy—all of these subjects and more will come together to form an engaging story.

Once writer-director Eskridge establishes the basic premise behind Stray, the plot never really surprises—Jennifer is at once a seductress and a basket case, a kindhearted young woman and a vindictive witch. But the confident performances by Stone and McGlaughlin keep the picture interesting. As a writer, Eskridge presents the inner conflicts of these troubled characters in a realistic light. While Jennifer has both real and figurative scars that have wounded her once-innocent soul to its core, Greg seems like a decent man fighting to do the right thing.

While not too suspenseful or scary, Stray also impresses with a handful of fairly bloody scenes; those with a fondness for the aforementioned films, as well as movies like May (2002) and Obsessed (2009), will find something to enjoy here. Meanwhile, the conclusion, although predictable, is a thoughtful combination of the hopeful and the tragic, leaving audiences to wonder what will become of Jennifer next.

While a bit overlong at 107 minutes, Stray has a few throwaway scenes but it mostly resonates on a profound level. Audiences will want to wait until the denouement to discover just how impossible it might be for a people to fully run from their past.

Overall, Nena Eskridge’s Stray is a solid picture with a fierce portrayal of a damaged woman by Gabrielle Stone. Stone’s performance makes the movie, and watching her character spiral into mental decay is morbid fun. The film is currently available to watch on Amazon Prime and to rent on various media outlets.