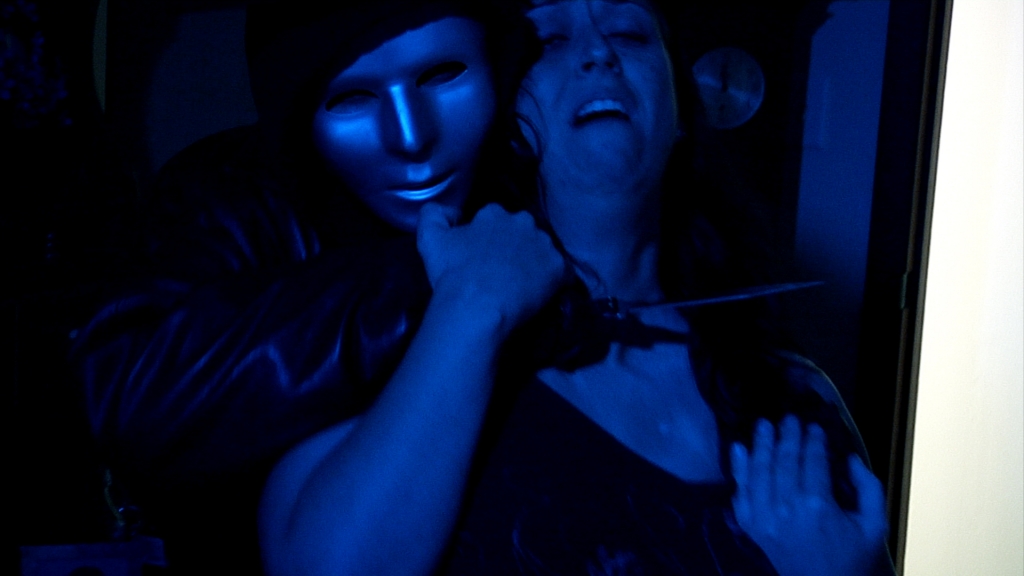 Evansville is a small town on the southern tip of Indiana, just over the Ohio River from Kentucky.  It’s a strange, forgotten land where the Midwest transforms into the South, one rusted out pickup truck and fading ghost town at a time.  It’s a place where people get used to doing for themselves, where they look spuriously at outsiders, where they abhor being told what to do by anyone, least of all the government.  In our politically divided times, this liminal landscape is widely derided as Trump Country by stuffy city folk like me, the sort of forgotten byways of Middle America that are all too easy to write off as the terrain of ignorant hicks.

It is from this transitional ground that the odd genre mashup Three Tears on Bloodstained Flesh has sprung — a regional production through and through, populated by unknown actors and shot on the sort of real-world locations that a Hollywood backlot could never fully reproduce.

From Hellmaster in Pontiac, Michigan to Scary Movie on the outskirts of Austin, Texas, regionally-produced, independently-shot horror movies are generally some of the most interesting, with styles and points of view far from the movie mainstream.  At their best, they’re a reflection of a specific time and place, filled with the kind of idiosyncrasies that Hollywood films, with their massive budgets and endless resources, can only hope to replicate.  Local filmmakers often have to get creative, pulling from regional theatre actors as well as friends and relatives, and that kind of creativity can often result in a unique vision that wouldn’t exist anywhere else.

Three Tears is billed as a Midwestern take on giallo films, that lurid and bloody sub-genre of Italian cinema popular in the 60s and 70s. 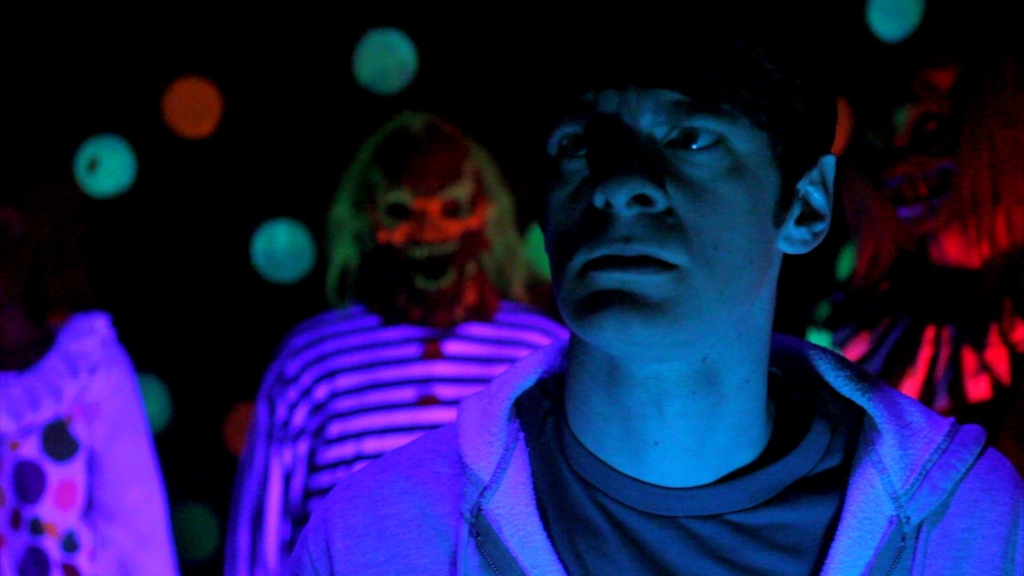 I’ll be the first to admit I’m not particularly knowledgeable about the sub-genre, having only seen a couple of the genre’s more famous offerings. That said, from what I do know of its stylistic trademarks, writer/director Jakob Bilinski clearly knows his stuff, draping these sequences in bright pastel colors; quick, jarring cuts; and a sense of heightened unreality.

Indeed, the giallo scenes in the film are strikingly well-composed from an aesthetic point of view, with the kinds of details that show Bilinski to be a student of the genre.  It’s in the mashing up of giallo with hyper-earnest family revenge drama that the film falls short.

Three Tears centers on Dominic, a tightly coiled man with a violent temper, played with an intense, meaty physicality by Bill Gobin.  He’s returned to his hometown for the funeral of his niece Kacie (Rosalind Rubin), who we see murdered by a masked killer in the film’s opening sequence. It’s clear to Dominic pretty quickly that something’s afoot in town (indeed, he must ask some variation on “what the hell’s going on around here?” a couple dozen times), and that the explanation given by corrupt local sheriff Rex Drisco (Jim Dougherty rocking some serious Just for Men beard color) of Kacie’s death as an animal attack isn’t exactly true.

Determined to find answers, Dominic tears his way through the small town, interrogating anyone with ties to Kacie and essentially ignoring his daughter Kendall (Kayla Crance), whom he’s brought along on the trip, and who ends up falling in with a group of locals with some secrets of their own.

Dominic’s self-imposed status as a Man On a Mission allows him to indulge in all kinds of hyper-masculine tough guy tactics, not letting pesky things like the rule of law (which admittedly seems pretty lax in this town) or due process get in the way of getting answers. 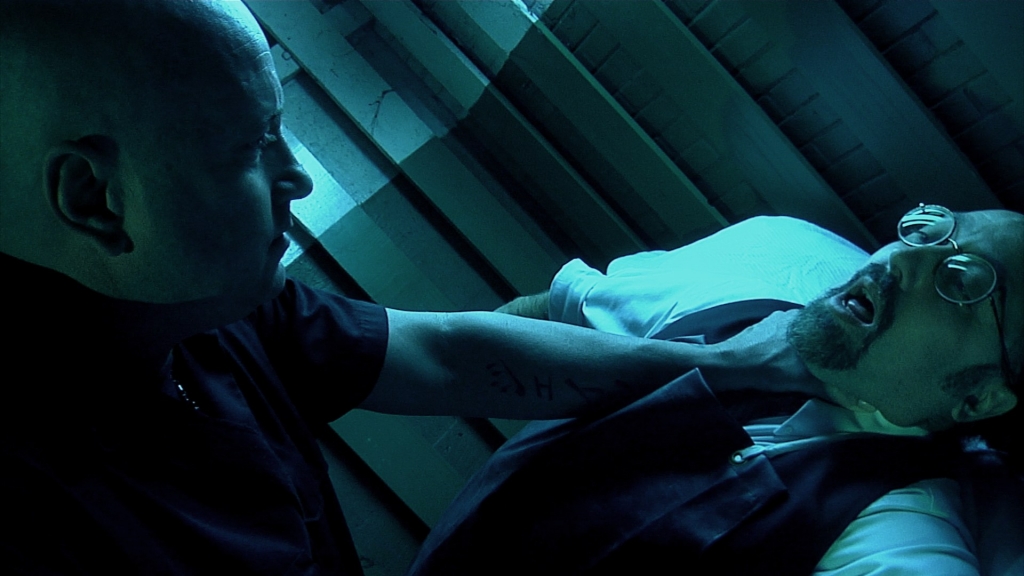 In general, this sense of hyper-masculinity permeates the whole film, wherein pretty much every female character is either a corpse, a delicate flower in need of protection, or a vehicle for T&A.

Most of the male characters are incredibly pervy, repeatedly calling Dominic’s dead niece a “fine piece of ass” (or something along those lines) directly to his face.  There were moments where I thought Bilinski was going over the top with this toxicity to make some sort of commentary on masculinity and its propensity towards violence, but nothing in the rest of the film really bears that out. Dominic’s clearly meant to be a sympathetic figure, a vicious killer who really just loves his family, which serves as a justification for the extreme lengths he’s willing to go to find out what happened to Kacie. I don’t think we’re supposed to look critically at any of his actions.

I don’t think we’re meant to condone what he does either, but the movie seems to suggest that this is the ugly but necessary business of righteousness. Revenge stories always have to reckon with this balancing act, subtly condemning the violent actions of its characters while also delivering on that violence, and the film doesn’t find that balance.

It’s that aspect of the story, fusing the lurid aesthetics of giallo onto an ostensibly gritty, at times troublingly misogynist revenge thriller, that I had the hardest time with. 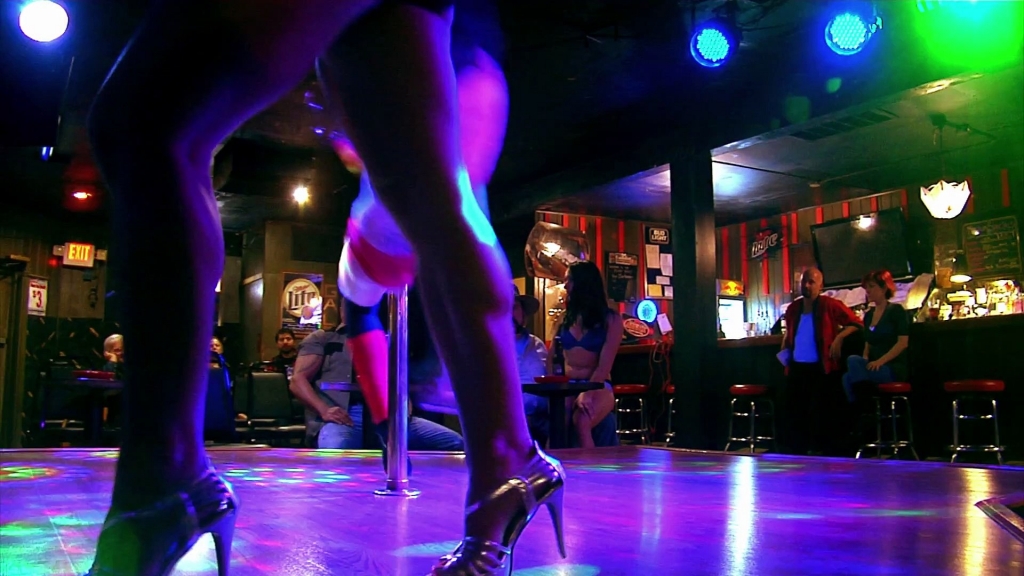 Three Tears takes its plot incredibly seriously, with rarely a lighthearted moment or self-aware wink to the audience, and yet as a genre exercise, it’s obviously self-aware.

Giallo has been fertile ground for homage, parody, and re-appropriation for a long time, with its highly recognizable style, and it’s not like it’s ever been the most progressive genre in terms of gender politics (from my admittedly limited understanding). However, previous uses of the form have often augmented their problematic elements with a heavy dose of camp, a wink and a nod to the viewer that they know what they’re doing is dated, whereas Three Tears plays everything extremely earnest. Indeed, any time the film slows down for a sentimental scene, like Dominic squeezing out a tear while watching Kacie’s home movies, it comes off as more silly than emotionally affecting, leading to some unintentionally funny moments.

At times, it feels like Bilinski is attempting some