A smart, surprising slow-burn that builds to a satisfying climax, the Argentinian horror film “Welcome to Hell” is a devilish delight. 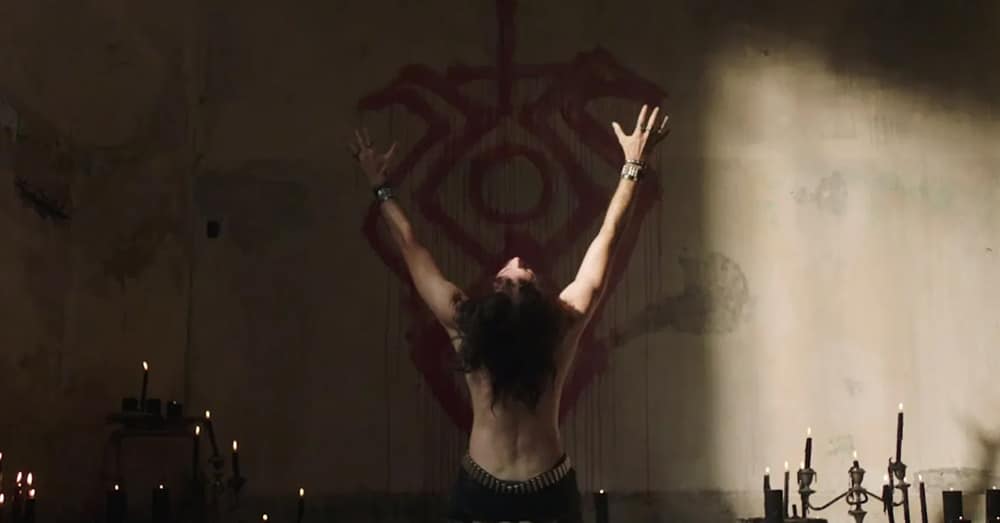 An unconscious pregnant woman, bloodied and beaten, wakes up nailed to a cross in a horrific opening sequence. Across from her is a robed man in a horned goat mask chanting ominously in Latin. He raises up his knife. As he brings the knife down, we hear the woman scream off-camera and cut to black.

The woman, now unscathed, awakens in a small, sparsely furnished room and begins to get dressed.

After a dramatic and tense opening, Welcome to Hell (Bienvenidos al Infierno), moves back in time and slows down considerably to reveal Lucia’s quiet, day-to-day life residing with her mute grandmother at her remote cabin — nestled deep in the forest.

Lucia (wonderfully portrayed by Costanza Cardillo) takes her time, unhurried as a woman with nowhere to be, as she strolls leisurely in and out of the cabin, from the extremely modest and shabby interior to the awe-inspiring natural beauty of the exterior.

Lucia’s grandmother, her Abuela, has a habit of leaving Lucia seemingly random motivational notes — a habit that irritates her granddaughter. These notes contain short, pithy messages, such as:

“One must stop the chaos in oneself to be able to give birth to a dancing star.”

Lucia informs her Abuela that she’s heading into town.

We then cut to a jarring but captivating title screen with a 70’s-style grindhouse aesthetic and a pulsing metal soundtrack. 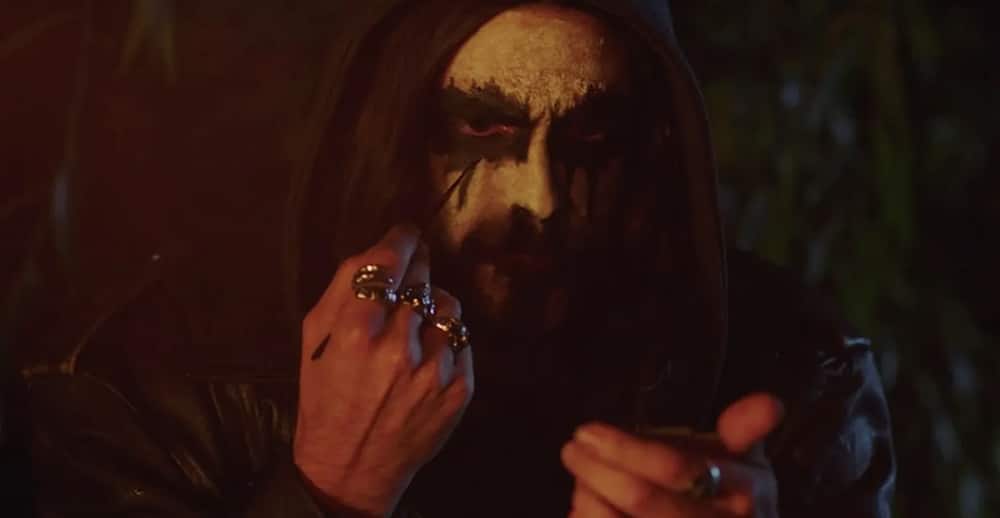 This transitions perfectly to our first flashback of Lucia and her friend at a metal club. There, she develops an instant attraction to the lead singer of a satanic death metal band, a man named Monje Negro who calls himself Monk (an effectively sinister performance from Demián Salomón).

After a bit of eye flirting between the two, we cut back to Lucia at the market in the present day.

A radio broadcast reports on the latest murder of a young woman, a murder that looks like it was done as part of a satanic ritual. The reporter explains a woman is murdered in Argentina every day, and Lucia is visibly shaken.

It becomes clear the film intends to unveil its mystery, little by little, through bits of Lucia’s backstory, told via flashback, interspersed with her current circumstances — until, eventually and inevitably, the past catches up to the present, and the two timelines merge.

What we soon learn is that Lucia became entangled with Monk in a relationship that was terribly problematic from the get-go. At first, she finds herself seduced by his dangerous, bad boy persona —getting turned on by his rough handling of her and some kinky knife play.

Eventually, however, things take a darker turn. Lucia becomes pregnant with Monk’s child and begins to realize neither she nor her unborn child is safe around Monk and his cruel bandmates.

She flees to live with her grandmother off the grid, but Monk becomes dangerously obsessed with finding her and reclaiming his ‘property’. He enlists his bandmates and legions of loyal followers to help hunt her down.

One of my favorite parts of this film was the way director and co-writer Jimena Monteoliva shot the film to draw a sharp contrast between Lucia’s time with Monk and her time with her Abuela. 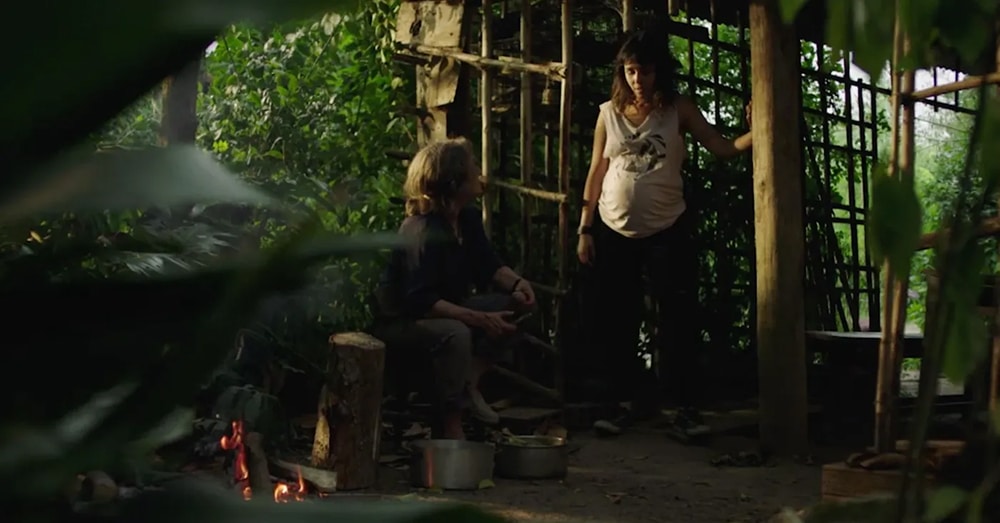 The scenes with Monk — squatting in a derelict basement — are dark, grimy, and almost suffocatingly oppressive. Whereas the scenes with her grandmother are bright and beautifully shot against a devastatingly beautiful natural backdrop to convey a sense of tranquility.

It’s a contrast that truly feels like a journey between heaven and hell, and it serves the narrative brilliantly.

Once Monk finally locates his victim in the explosive final act, Welcome to Hell becomes a very different film; intense, fast-paced, and thrilling.

But, please, don’t let the word “slow burn” keep you away. The character development that happens during this time is critical, and the film is never boring. Further, the slow buildup is necessary to build ample tension and ensure the climax hits as hard as it does.

We also get plenty of strategically placed clues throughout, and careful viewers who pay attention to early bits of foreshadowing will be rewarded handsomely when the film finally weaves all those threads together.

Now, about that ending…

It’s a potentially divisive ending because it takes a sharp left turn into an old-school Satanic horror film, with a bit of home invasion horror added to the mix. 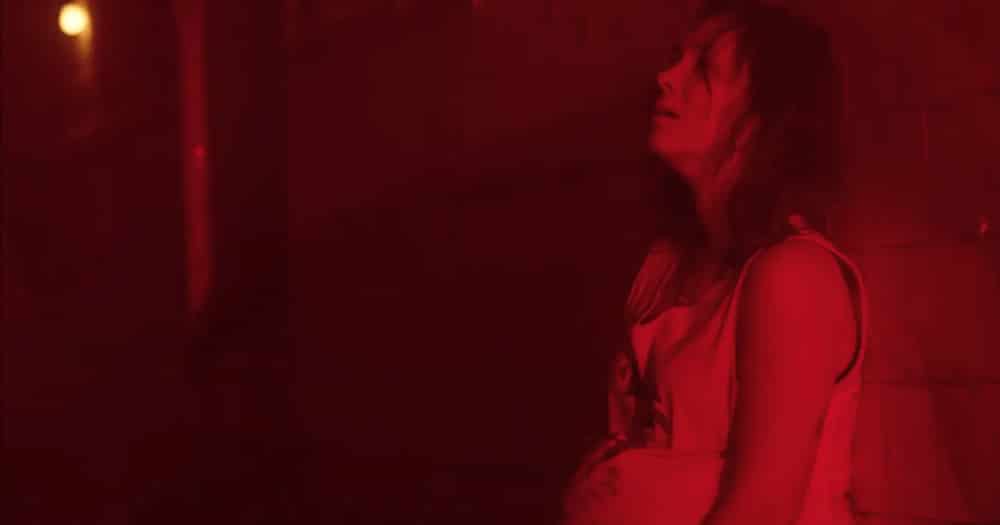 Monteoliva holds nothing back in the climax. All the quiet restraint she’s shown up to this point goes out the window in favor of balls-to-the-wall metal madness, brutality, and insane creature effects.

She also delivers a juicy twist that I’m dying to talk about. I’ll refrain for fear of spoiling the fun. But it’s the kind of ending you’ll likely feel strongly about — one way or another.

Personally, I loved it for reasons I can’t get into. Suffice it to say, the right audience is going to have a blast with this one.

Tonally, the film is a bit all over the map, but that helps keep Welcome to Hell from feeling like overly well-tread territory. Somehow, it manages to be both familiar in many ways yet quite a unique experience.

It’s also an odd blend of deadly serious subject matter (domestic abuse, femicide, women’s rights) and over-the-top supernatural mayhem. A strange combination to be sure, but it really works here — delivering sensitive content in an effective manner without being preachy, heavy-handed, or sensationalized.

With a simple but solid script from co-writer Camilo De Cabo, outstanding direction from Jimena Monteoliva, great sound and visuals, and stellar performances from our three main leads, this Argentinean female-driven horror film delivers the goods.

Premiering first at Spain’s Sitges Film Festival before heading to the Buenos Aires International Film Festival, this well-made Screambox Original is definitely worth checking out.

ABOUT SCREAMBOX
Screambox is unique genre streaming platform where you can watch everything from award-winning indie films, classics, and newly discovered filmmakers. You can watch FREE with ads, or pay just $4.99 a month for a premium, ad-free experience with tons of exclusive content and your first month free. (Note: You’ll need a premium account to watch Welcome to Hell.)
SIGN UP FOR SCREAMBOX