Blending elements of several sub genres, “Wretch” is a rich and compelling psychological thriller/supernatural creature feature that keeps you guessing.

Wretch follows three friends struggling to piece together fractured memories after a drug-fueled night in the woods. In the process, they’re forced to confront guilt, jealousy, and a supernatural presence that threatens to expose their true natures. The film was written and directed by Brian Cunningham, whose previous films include the horror-comedy Overtime, the acclaimed haunted house documentary Monsters Wanted, and the recent Loss Prevention.

Wretch sells itself as “The Blair Witch Project on acid”. While that makes for a great marketing pitch, such a description really sells this film short. While I loved Blair Witch, Wretch is far more thought provoking psychological thriller than straightforward supernatural scares.

We’ll start with the similarities.

There is some kind of disturbing incident in the woods, though for much of the film we’re not really sure what that is. And like Blair Witch, there’s a rather smart emphasis on maintaining mystery throughout, alluding to the creepy goings on without really showing them. However, when the film does show its hand and reveal some of the hidden horror, it does so through the use of strong practical and creature effects.

Wretch also relies heavily on found footage style filmmaking (blended with traditional cinematography), with many scenes shown through the lens of a handheld or mounted recording device. For those who dislike this cinematic style, this may be a turn off. Yet, it’s never obtrusive but rather smartly integrated into the story, and there’s not that frustrating attempt to artificially force every scene into the confines of the found footage construct — thus never taking away from the authenticity of the narrative.

In fact, Cunningham explains, “The movie is about voyeurism, surveillance, and shifting perspectives. In a lot of ways, it’s an anti-found-footage movie that becomes something very different by the end.” 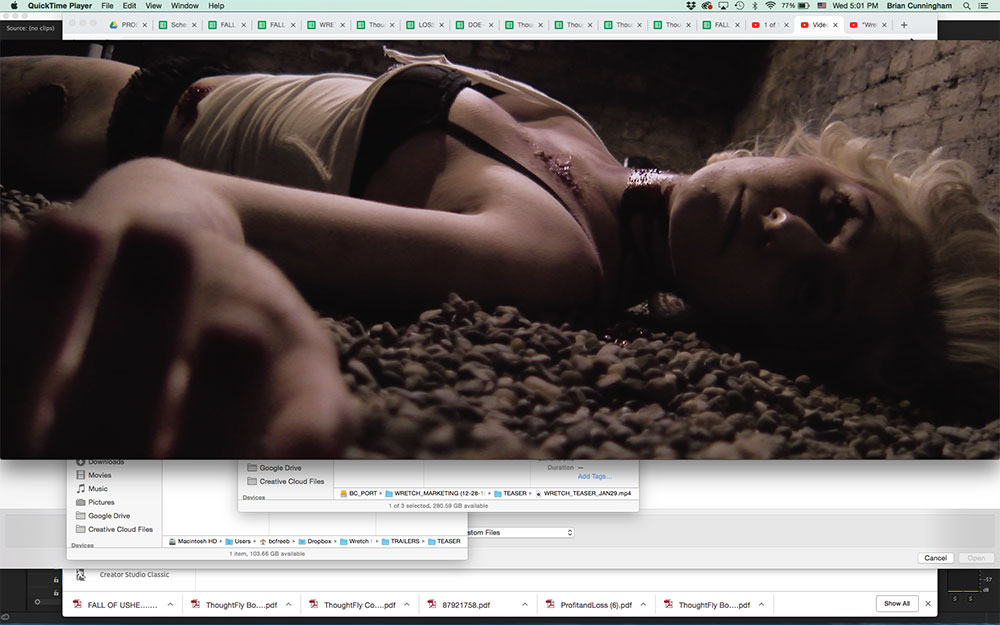 While the film doesn’t bill itself as a true story or recovered footage, it does take a cue from Blair Witch by using relatively unknown actors who deliver believable and compelling performances — creating characters who feel like real people. The script takes the characters through a wide range of emotions, putting them in numerous intense, highly dramatic and emotional scenes. The actors skillfully deliver the range and intensity needed to sell both the fear and the drama, with a standout performance by the female lead Megan Massie.

Narratively, the film is intentionally enigmatic, reflecting the confusion and psychological stress of our characters. It moves back and forth in time, beginning near the unsettling end of the story and then jumping back to show us how we got there.

In the opening scene, we meet a young couple, Caleb (Spencer Korcz) and Abby (Massie). We find Caleb running through a home and frantically calling out for Abby. He finally finds her hysterical, covered in blood and clearly in a fragile mental state — oscillating between sobs and maniacal laughter. The police arrive on the scene yelling for the two to get on the ground, and it’s clear something terrible has just happened. At this point, however, we’re not sure what that something is.

We then immediately flash back to a party at Caleb and Abby’s home, where we start to learn more about the couple, as well as their friend Riker (Riker Hill). With a video camera in hand, Caleb encourages his very intoxicated girlfriend to make out with her girlfriend while he records.

She reluctantly plays along, seemingly eager to please her man. Meanwhile, Riker broods in the corner, expressing his general disgust of everyone and everything. Abby tells Caleb she’s tired and seduces him so he’ll got to bed with her. But when she immediately passes out, Caleb wastes no time bedding her friend, much to the disgust of Riker.

While we get much more detail throughout the film, this scene alone does a great job establishing our protagonists as three very flawed individuals with very complicated relationships to one another.

The day after the party, Riker calls to apologize for his “mean drunk” behavior the night before and invites the couple to party in the woods with him, where he can share some of the Native American hallucinogenic drug he’s recently scored. Caleb passes out and wakes up the next morning to find Abby and Riker are not at the campsite. He walks into the woods a bit and finds the two engaged in intense conversation. On the drive home, Abby seems troubled. Caleb asks what she and Riker were talking about, and she says it was nothing.

Soon Abby begins to have very vivid and disturbing dreams. Her behavior becomes more erratic, and she becomes withdrawn and unable to sleep. Meanwhile, Riker’s incessant texting to Abby further ignites Caleb’s jealousy and suspicions that something is not right.

As the film progresses, we slowly start to get more fragments of what happened the night in the woods. This is intercut with Abby’s rapid emotional decline, Caleb’s attempt to figure out what’s going on, and private meetings between Riker and Abby to discuss the events of the night and the disturbing aftermath.

Secrets are revealed, and it becomes increasingly difficult to determine what’s real — and who is friend or foe.

What is Abby repressing? What is Riker hiding?  What (if anything) did she see in those woods — and why is she being tormented? Is her mind broken, or is she being slowly and intentionally driven insane?

WRETCH is a difficult film to discuss without revealing too much, as a significant source of the viewing enjoying comes from trying to put together the pieces of the mystery. Most of the movie left me feeling disoriented, unsure exactly what was happening and why. And, like all great psychological horror films, even the final reveal leaves enough to interpretation that there’s still plenty to chew on after it’s all over.

I’m resisting the urge to discuss the highly satisfying ending in detail, as I certainly want you to experience it for yourself. But similar to films like It Follows and The Babadook, there’s an underlying allegorical thread to the horror in Wretch that makes this a much richer viewing experience than purely supernatural horror films.

While Wretch is much more disturbing than truly scary, it does a great job keeping you invested and effectively crawling under your skin. If you’re a fan of the kind of psychological horror that really gets in your head and keeps you guessing, I definitely recommend you give this one a watch.

Wretch is available for pre-order on iTunes and will be released on digital and OnDemand and January 29.