Scary, shocking, and strangely heartfelt, this surprising indie film defies categorization; “I’ll Take your Dead” will take a piece of your heart.

Movies can evoke powerful emotions within the viewers. Often, they captivate our imagination, frighten us, or cause joy. And some are so heartfelt that they can even make you cry.

But how many of those movies that fall into the “tearjerker” category start off with a man dismembering bodies in brutal fashion and dissolving their bodies in acid?  I can only think of one. And that is the 2018 indie gem I’ll Take Your Dead  from writer/director Chad Archibald (Bite).

This is certainly not what I expected as the synopsis, poster and trailer tell a different story.

The synopsis from Letterboxd:

“Death is knocking at their door.

William has a simple job: he makes dead bodies disappear. His daughter Gloria has become used to rough-looking men dropping off corpses and is even convinced that some of them are haunting their house.”

And the trailer basically shows “rough-looking men dropping off corpses” for the father’s disposal. But one of them, a young woman named Jackie (Jess Salguerio), isn’t quite dead. And we get some foreshadowing regarding what the father plans on doing about this conundrum.

But this movie is so much more than meets the eye, which was a shocking surprise.

Once we get the groundwork out of the way, we end up with Jackie tied to the bed. The father, nicknamed The Candy Butcher, is deciding what to do about her. His daughter, Gloria (Ava Preston), who he is raising alone, speaks with Jackie and lays down the ground rules.

“Don’t go in my room. Don’t touch my markers. Don’t touch my toothbrush, the purple and blue one.” The innocent child-like conversation is amazing, especially when juxtaposed with the pure macabre from her later narration.

“I didn’t want daddy to burn that dress. It was mommy’s favorite. But blood leaves trails and he had to burn it.”  Or the most haunting “I don’t know why Jackie is scared of us. We’re just a normal family.”

To Gloria, there is nothing odd about their lifestyle.

The father explains that he got into body disposal by accident. He helped a few hunters who turned out to be bank robbers. They forced him to dispose of a body or they would kill his family. He kept doing it because his wife had cancer. And when she died, the bodies just kept coming. If that doesn’t pull on your heart strings, I don’t know what will.

Jackie, in a bid to get free from her restraints, tries to befriend Gloria, who one night has her period. And she must look to Jackie, the only female figure in her life, for help in understanding what is going on. Obviously, the father gets wind of this. His stammering, confused, ‘unsure what to say’ reaction to his daughter becoming a woman is so relatable. As a father of three girls, I know that feeling too well. The writing and acting for this movie is so accurate. 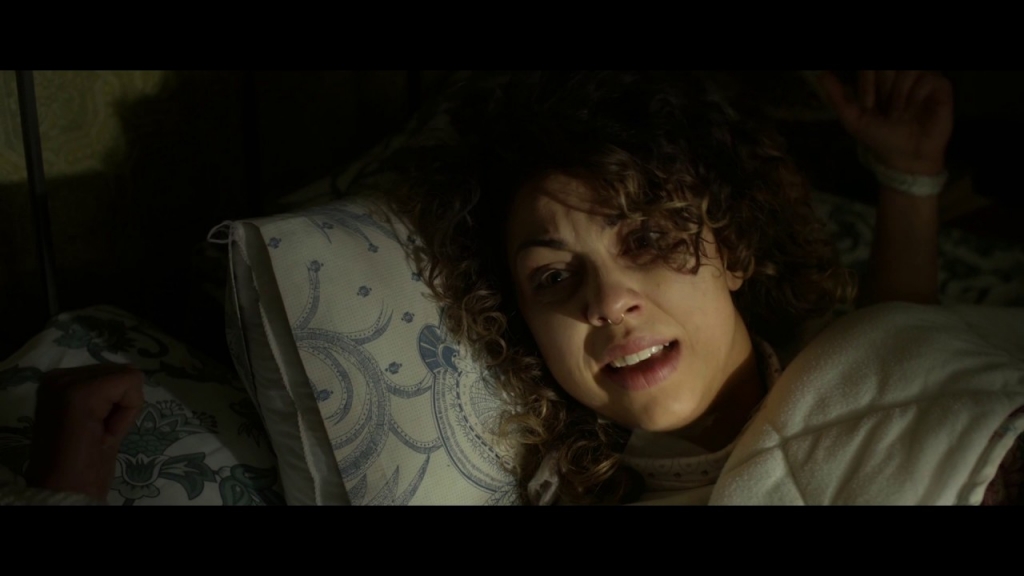 With all this emotion, character growth and family stuff, you almost forget about the ghosts that the synopsis mentioned.

This movie is hard to classify, as you have a haunted house ghost story, a crime thriller, a touching family movie with a coming-of -age element, and a full-blown action movie shootout.

If I had to classify this one, I would simply call it awesome! The story and character development are amazing. The spooky haunted house ghost stuff is chilling, while the ghosts in this movie are amazing looking and unique. The gore is present in a very strong way. There’s lots of blood, lots of head bashing, and lots of melting bodies — both dead and alive in acid. We constantly see the father sawing through shin bones, and my leg itches watching it.

I’ll Take Your Dead will not only scare you and maybe make you lose your lunch in those gory scenes, but it will also take a piece of your heart. It’s a fantastic movie that is so much more than the bland horror flick the synopsis and trailer make it appear to be. 5 stars and a welcome addition to my collection. I will definitely watch again soon.

I’ll Take Your Dead is currently available to stream on your favorite VOD platform.