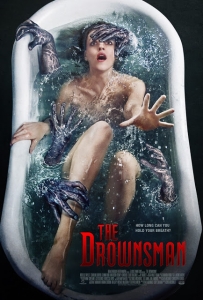 The Drownsman is a movie that has all the makings of a truly great horror film — a movie inspired by great slasher films of the 80s and filmmaking legends like Wes Craven — but sadly fails to deliver on that promise. I wanted to love this movie, and I felt like I very nearly did. However, the film falls too flat, does so little with so much, and squanders such great potential.

This 2014 horror/thriller was directed by Chad Archibald, who co-wrote the script with Cody Calahan. It tells the story of a young girl, Madison (played to perfection by Michelle Mylett, Antisocial), who nearly drowns in a lake accident and then develops an abnormal fear of water…to the point she has to take her liquids intravenously because she can’t even get near a glass of water. After shutting the world and her friends out for over a year, her friends stage an intervention in an attempt to cure the crazy. Instead, they manage to release an evil spirit into their world, a serial killer turned supernatural psychopath who begins to stalk the women one by one.

Sebastian Donner, aka The Drownsman, has the power to materialize in any body of water, no matter how small (I can’t be the only one thinking of Ghost Shark right about now). He pulls his victims in through the portal created by the water, dragging them into a lair of submerged torment from which there is no escape. It’s a creative concept and a unique way of dispatching victims.

Drowning is a terrifying way to die, and it plays on some very primal and universal fears. In fact, the first couple of kills are well-executed and satisfying to watch. The problem with this specific plot device is that it inevitably leads to monotony. There’s no opportunity to get creative with the kills. It’s a one trick pony that wears thin half way into the film. By the end, as girls start dying at a rapid pace, you’re likely to have completely lost interest.

I’m not usually one to point out plot holes in a horror movie. Once we’re immersed in a world ruled by supernatural forces, where ordinary men become unstoppable and unkillable forces of evil, I’ve suspended my disbelief enough to roll with the punches. But as improbable and fantastical as movies like Nightmare on Elm Street and Friday the 13th are, they still feel believable within the context of the world the filmmakers have created. The Drownsman, on the other hand, doesn’t even play by its own set of maddeningly illogical rules, and plot devices seem frustratingly forced and painfully contrived.

Likewise, I’m not a fan of movies with endless exposition and backstory, but we should get at least a basic understanding of a killer’s motives and vulnerabilities. Here we get nothing that makes any coherent sense, and none of the characters are fleshed out enough to inspire any level of emotional investment. Towards the end of the film, I found myself frustrated and bored, eager for nothing more than an end to tedium.

The movie also suffers from a seriously dragging midsection due to the need to have the leads play detective and solve the mystery of the supernatural baddie before he systematically takes out the entire cast. You’ve seen this done a million times before, but it’s poorly executed here and the reveal is unsatisfying and confusing.

Let’s talk about the positives for a moment. For the most part, the special effects work really well in the film. The Drownsman, played by Canadian “Man of Horror” Ry Barrett, looks creepy as hell, and the makeup effects are quite good. Cinematographer Marc Forand is the real star of this film. The film is shot beautifully and looks great onscreen. The kills scenes are well done, and the underwater shots were extraordinary. The Drownsman’s lair is appropriately creepy, and Archibald does a great job creating mood and atmosphere.

In the end, however, this is a very clear example of style over substance. While the film looks impressive, it suffers from a weak script, underdeveloped characters, distracting plot inconsistencies, and a villain that looks cool but lacks the depth to have any real staying power.

This homage to 80s horror had the makings of a solid stalker film from back in the day. But it quickly lost its momentum and devolved into a silly, sopping mess that ends in boredom and frustration.