In a continued celebration of Women in Horror Month, Barbara Crampton shares her favorite horror films with Shudder members.

In you case you missed it, our friends at Shudder have been killing it this month with their celebration of Women in Horror.

Subscribers can access a brand new collection of films, called “A Woman’s Touch“, highlighting and honoring horror movies directed by women. Some of the great selections include In Her Skin, Trouble Every Day, and the directorial debut of The Soska Sisters, Dead Hooker in a Trunk (just to name a few). You’ll also find Shudder exclusives like Mirror Mirror, My Sucky Teen Romance, and The Stylist.

In addition, legendary actress and champion for horror films, Barbara Crampton (Re-Animator, From Beyond), is the streaming network’s latest guest curator. She sat down with Shudder to pick her top 5 films, including two of her memorable collaborations with director Stuart Gordon, the beloved cult classics Re-Animator and Castle Freak. The full collection is now on Shudder, and you can check out the video of Barbara Crampton talking about her top picks below. (Not surprisingly, she has great taste!)

From the Press Release:

The iconic actress knew she wanted to act since the age of five. Crampton’s start in acting came from a role in King Lear; since then, she’s taken the horror scene by storm. Her passion for the industry stems from the first time she watched The Exorcist: “The first time I saw a horror movie was The Exorcist, and I was maybe fourteen or fifteen years old when it came out, I was terrified.”

Crampton joins an esteemed group of guest curators for Shudder. Previous curators include comedian Kumail Nanjiani, musician and filmmaker Rob Zombie, and director Joe Dante, all of whose collections are available on Shudder. 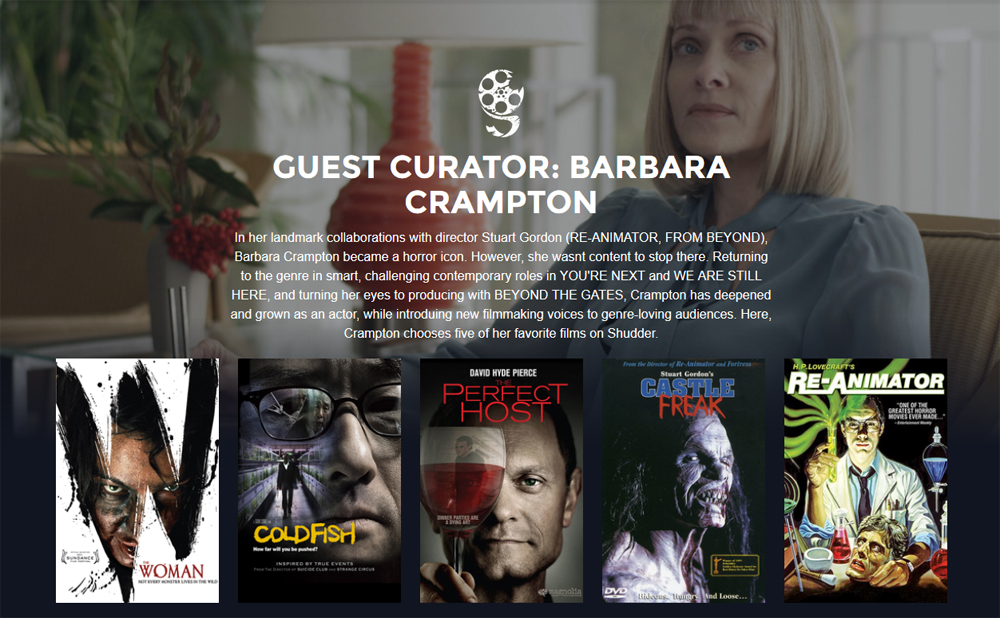 The full collection curated by Barbara Crampton, now available exclusively on Shudder, is detailed below along with comments from Crampton:

The movie I’m most identified with, is actually the seminal work of both Jeffrey Combs and Stuart Gordon. This movie surprised critics with it’s abundance of gory effects, huge laughs and exploitive nature.

Continuing Stuart’s successful adaptations of HP Lovecraft, his aim was to make a dark and bleak film about a broken family. Yet is was the vision of the grotesque freak played by Jonathan Fuller with sad and mysterious intensity that has given people, no less than Kristen Stewart haunting nightmares.

Gleeful and robust tale of both misogyny and feminism, everyone is this movie floored me with their performances. Sean Bridges is a righteous villain you don’t see coming and Pollyanna McIntosh is fearless as the the captive “woman” who seeks escape and exacts revenge.

Tragic and relentless psychological tale of the capture of a man’s life and soul.  With tortuous scenes of mental cruelty and abundant gore, one scene sticks out in my mind late in the film. When the character of Murata played by the fierce Denden incessantly berates his new accomplice Syamoto into doing something more horrific than he could possible imagine, it’s a ominous reminder of  what a person is capable of, if pushed to the limit.

Fun and light turn that suits David Hyde Pierce perfectly as the consummate host hiding a dark secret and alternative personality. I found this film to be both suspenseful and unexpectedly charming.

Shudder is a premium streaming video service, super-serving fans of thrillers, suspense and horror. Backed by AMC Networks, Shudder has a growing and dynamic selection of thrilling premieres, originals, and exclusives, which complement its impressive library of international and independent films, gripping TV series, and Hollywood blockbuster favorites. Shudder streams ad-free in the US, Canada, UK, and Ireland on the web, iOS, Android, Chromecast, Apple TV, and Roku for $4.99/month or $49.99 with an annual membership.