In the oft overlooked 80s gem that feels eerily relevant today, an obsession with escapism and the desperate desire to feel special turns deadly. 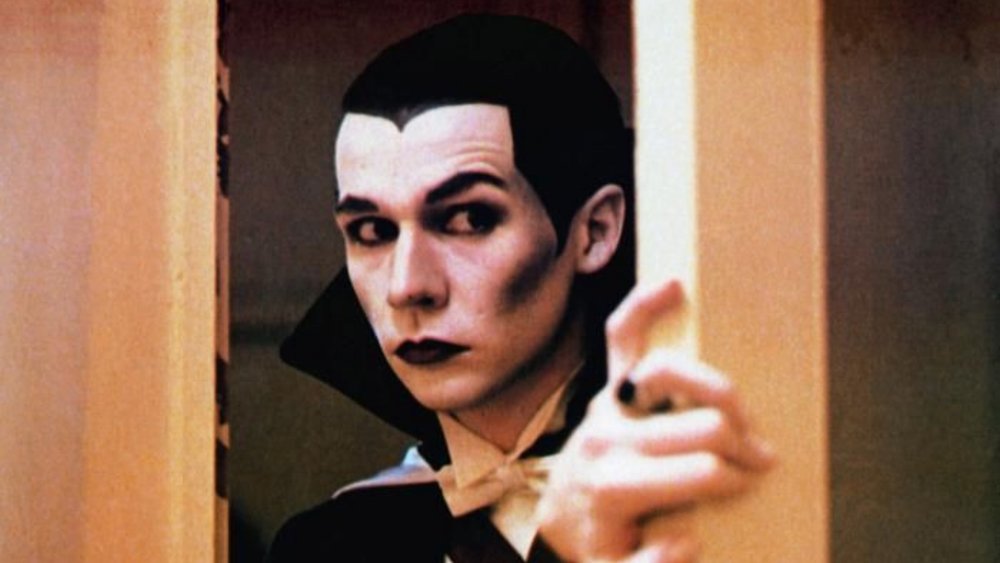 The tagline for Fade to Black has only gotten funnier with age:

“Meet Eric Binford, the ultimate movie buff. If you know someone like him…run!”

If internet cliques and dorm room walls and #MeToo reckonings have taught us anything, “movie buff” is as close as it’s ever been to an outright pejorative, especially for anybody fitting Eric’s description. If the almost-lost Fade to Black teaches us anything, it’s that the red flags haven’t changed.

When his aunt tells him to get a life, Eric snidely counters, “If you’re so smart, tell me what James Cagney’s name was in White Heat.” He doesn’t think — he recalls. The closest applicable scene rolls behind his eyeballs, imprinted into the softest parts of his brain like false, fantastic memories. Not that they seem fantastic to Eric. His pulse is the flicker of his bedside projector. He is not a man but a pile of trivia and borrowed tics. A Cary Grant smirk here, a James Cagney rage there. Swap out the black-and-white icons for, say, Fight Club philosophy or any given Bill Murray performance, and this movie could’ve been made last year.

Fade to Black is a canary in a coal mine. 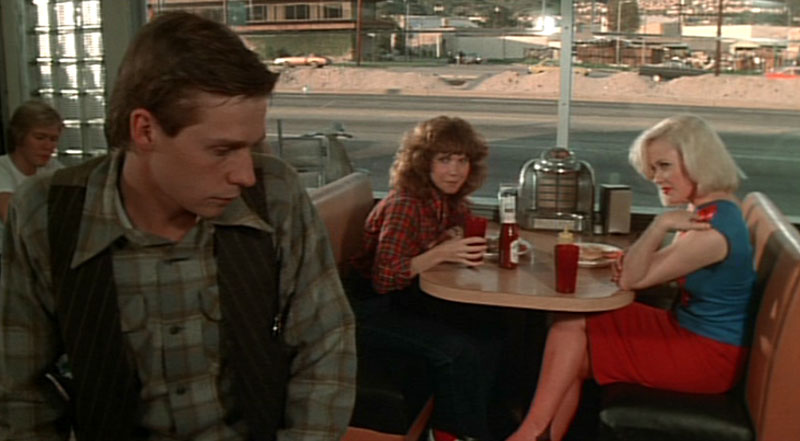 Unfortunately, when it died a quick death in 1980, the mine was too tiny to take seriously.

Once upon a time, obsessing over movies took a lot of work. Eric only watches as many as he does because he works in a film exchange warehouse. His room looks like a Planet Hollywood thrift store. The manager of the local bookstore not only knows him by name but remembers which antique lobby cards he already bought. It’s only (un)natural that the woman he so hopelessly, perilously falls for is a dead-ringer for Marilyn Monroe.

It sounds like the setup to any given obsessed-fan thriller, but resists a temptation most of its descendants succumb to one way or the other. Fade to Black doesn’t blame those horrible horror movies.

The case could be made he’s radicalized by a midnight screening of Night of the Living Dead, but he watches it in the same fugue state he does any given film noir. One of his crimes, though more of a misunderstanding than a murder, is a straight pull from Psycho. But by and large, Eric just loves movies. Namely, old movies.

One of the film’s most haunting sequences has nothing to do with homicide. 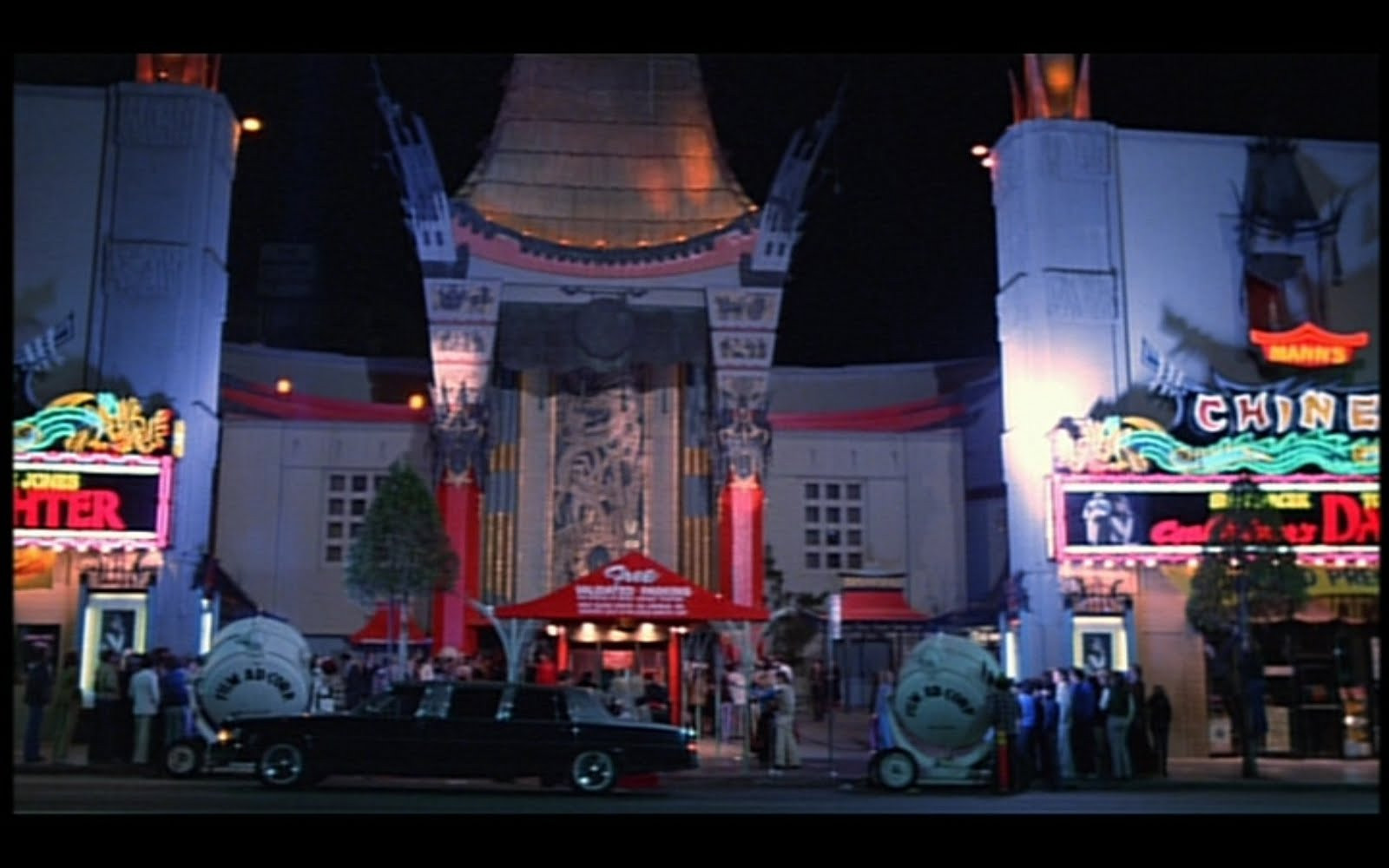 Eric makes an honest-to-God date with his obsession. He dresses in a Pee-Wee suit, adopts a passable Mid-Atlantic accent, and wilts slowly under the neon for a woman who forgot about him. The longer he waits, the more alien he looks, despite his best humanoid disguise.

These are real marquees, not the ‘80s period kind that are always showing E.T. and the director’s favorite Carpenter movie. He wanders past a glowing ad for Serial, a 1980 Martin Mull vehicle, that might as well be a broadcast from another dimension.

The past is comfortable and consistent. Decades before it became a viable industry, nostalgia was Eric’s only vice. The cigarettes are just a reference and, ultimately, what do him in.

It’s not the violence in his flickering fantasyland that poisons him, but the attitudes. 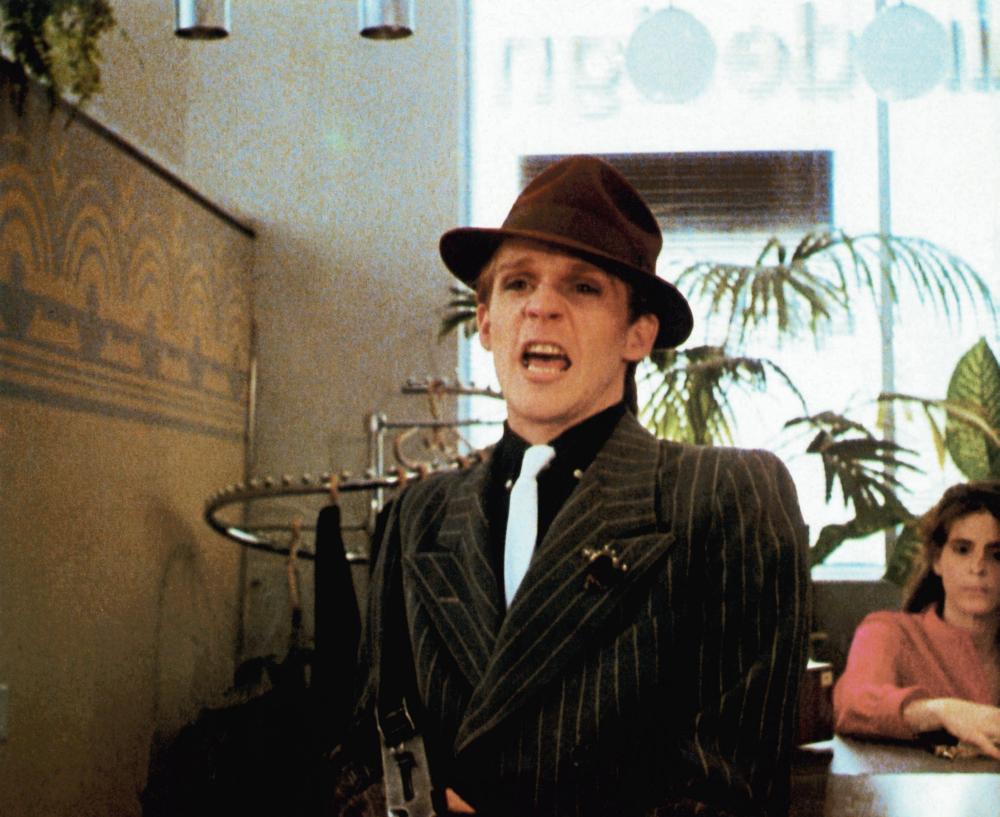 For his first kill, he imitates Richard Widmark from Kiss of Death, giddily threatening a cornered woman. This particular derangement is something like Obsessed-Fan prophesy — Widmark’s performance was inspired by the then-new Joker. A more patriotic death comes courtesy of a Hopalong Cassidy getup. Eric challenges the capital-B Bad Guy to a duel and guns him down. His hand shakes even after he stops squeezing the trigger. It’s a hint, a crack of reality shining through his cinematic daze. Was it a capital-B Bad Guy or just some asshole that made fun of him?

Perish the thought — Eric Binford is the hero.

Check his hat, spurs, and everything else if you don’t believe him. Though he won’t answer to that name; try Cagney’s from White Heat.

The actual hero of Fade to Black doesn’t wear any of that. He doesn’t even particularly seem to like clothes. Dr. Jerry Moriarty — pardon the pun — is the kind of recovering hippie that the FBI likes to keep tabs on. As soon as he moves into his basement office, he populates it with massive potted plants, posters of primates, and a chalkboard that says only, “Life is just one damn thing after another.” He hates violent movies and loves Ritz crackers in bed, seemingly at the same time he’s having sex.

Dennis Christopher plays Eric as a shapeshifter, only functional in costume as anything other than himself. Tim Thomerson plays Jerry as a man preternaturally comfortable in his own skin and openly contemptuous of the various outfits society imposes on it. Eric wants to escape the world. Jerry wants to fix it. It’s a conflict of interest that’s never been more searingly relevant than in the year of our Lord 2020.

But Fade to Black’s beauty hides in the in-between.