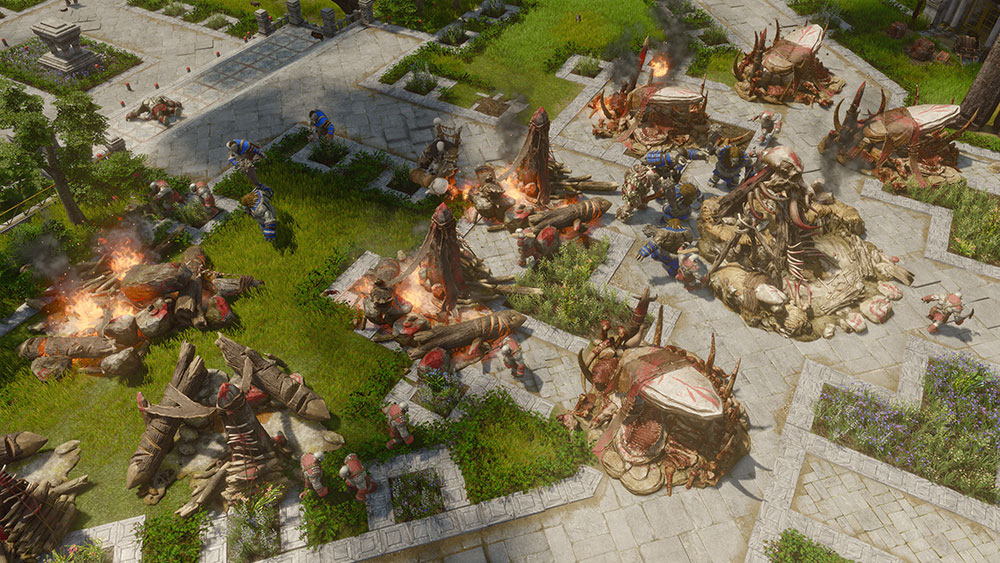 The SpellForce series is a combination of real-time strategy (RTS) and role-playing (RPG) created initially by Phenomic, now owned by THQ Nordic. These games mirror many of the same aspects of Diablo, Baldur’s Gate, and Warcraft, which makes for a captivating gaming experience.

SpellForce 3: Fallen God was released on November 3rd, 2020 and is a standalone expansion of SpellForce 3 that allows you to delve into the SpellForce world without having to own the main game. Available for PC or Steam, you play as the new Chieftain Akrog of the Moonkin, who must gather surviving members of his own and other troll tribes, to survive in a world where a bloodrot plague has weakened them and made them all vulnerable to human and Elven poachers and slavers.

As you build up the resources and numbers to survive, you and your party work cautiously with an Elven stranger to resurrect a fallen god as a means of salvation for the Trolls.

There are various ways in which you can play the game such as solo or co-op play, Player vs. Player, and online multiplayer. 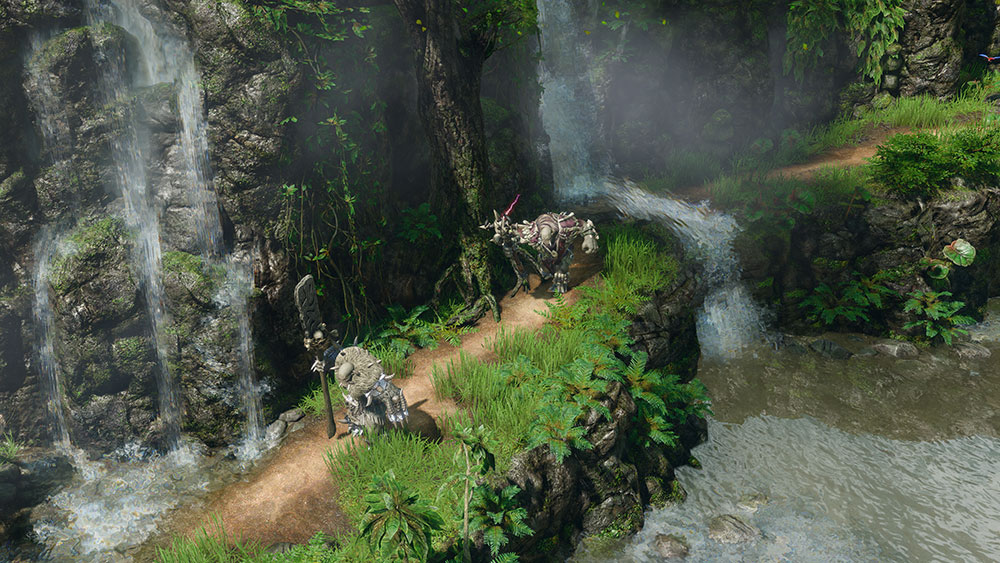 For this review, I decided to tackle this game by playing a solo campaign on Normal mode, since playing an RTS is fairly new to me. Also, it is important to note that while you can play with a controller, the game operates best with a mouse and keyboard, but the keybindings are not like your average WASD game and take a bit to get used to.

The combination of being an RTS and RPG hybrid played from the top-down perspective made this game easy to learn, especially when following the many video tutorials that appear as you advance further into the game. For a new player to RTS, I found these tutorials to be very helpful and would recommend all players to start this game with this feature on. You are given a lot of information in the beginning stages, and it will be important to remember as you continue your playthrough.

When you start Spellforce 3, you play as Chief Akrog. You are given three other members of your party (Zazka, Noag and Grungwarg); you can customize their appearance, class, and skills. As you play, you can level each member of the party up and develop their class abilities, all represented in your standard tree-pattern. As the Chief, your decisions carry weight on how the game plays out. So, it’s important to pay attention to the game dialogue and storyline.

Like the style in Dragon Age: Origins (2009), the decisions you make with your party impacts how the game will end. 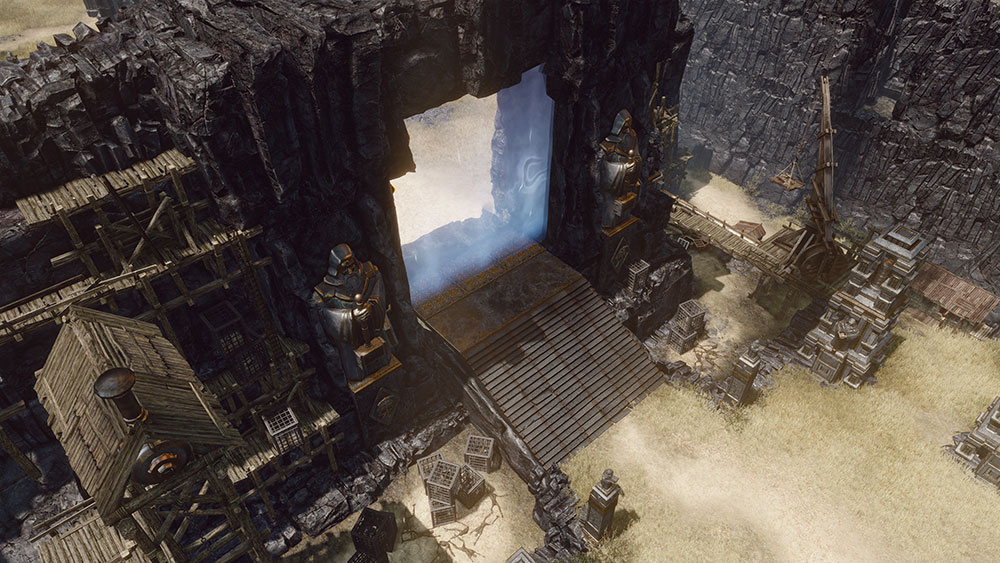 A few of the themes the game highlights are the needs of many vs the needs of the few, as well as how to not give in to your primal urges but strive to do better. This comes across in Chief Akrog’s relationship with his young brother Noag, because every decision you make in the game impacts his development as a character. As you complete side quests, your characters build a reputation and inventory that is important to the outcome of the game.

With this game being a hybrid of two different styles, there were a few areas that would benefit from improvement, the first being the ability to click on NPCs for initiating conversation or picking up items. At times, it would take multiple attempts or I would have to move my character to a ‘magical’ exact position to get it to work.

The other area needing improvement is the use of the Godstones. While these are great to have for quick transportation across the map, I found them tricky to activate. When I would try to create my flight path, at times one Godstone wouldn’t take me to the selected Godstone, or my party would just start walking away from one I activated. However, though a bit frustrating,  they don’t truly impact the gameplay. Half the time, you are too busy building up your Troll base camp with workers, fighters, and resources to have to travel too far.

This was a new element for me to manage — tending to my base camp and clan resources that can also be vulnerable to attack while you are exploring, sometimes causing you to lose the game. Thankfully, you can start over from your last save point and try a new strategy if needed.

Despite all of the various game mechanics, I was shocked by how gorgeous and detailed the graphics were. 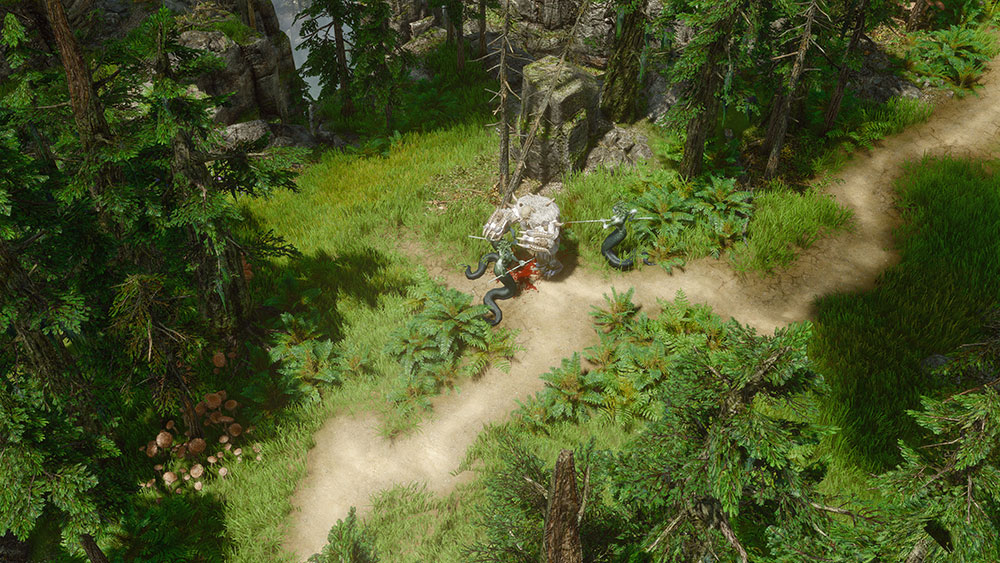 The comic book aesthetics, epic music, and animations immerse the player into a rich world of fantasy that makes you pining for more.

The gameplay imagery was just as good to look at as the cut scenes. All this combined with the detail put into the backstory of the characters and dialogue among the Trolls made this an aspect of the game I enjoyed very much. Hours of game time went by in a flash, as I felt like I was enjoying chapters out of a new fantasy book the likes of Wheel of Time or Forgotten Realms.

I would rate this game four black cats out of five for not only being a good introduction to RTS gameplay but combining descriptive storytelling and detailed graphics to create a game that can be considered time well spent.