Witchcraft in the woods. A set of mysterious masks that are never to be worn. A string of murders. “Dragula” is back to slay another season!

The Boulet Brothers, Dracmorda and Swanthula, kick their new season of Dragula off with a short film full of terror, as always, before we’re introduced to our queens this season (if you haven’t been keeping up with their Instagram announcements).

Our queens are thrown into a haunted house experience before they’re even able to set up at their workspaces this season — with the risk of elimination if anyone chickens out. However, not even a simulated car crash or killer clowns in a spinning room can run these bad bitches off, and they all come out on the other side.

Our queens are finally given the challenge of bringing horror icons to life in their own style in this episode. 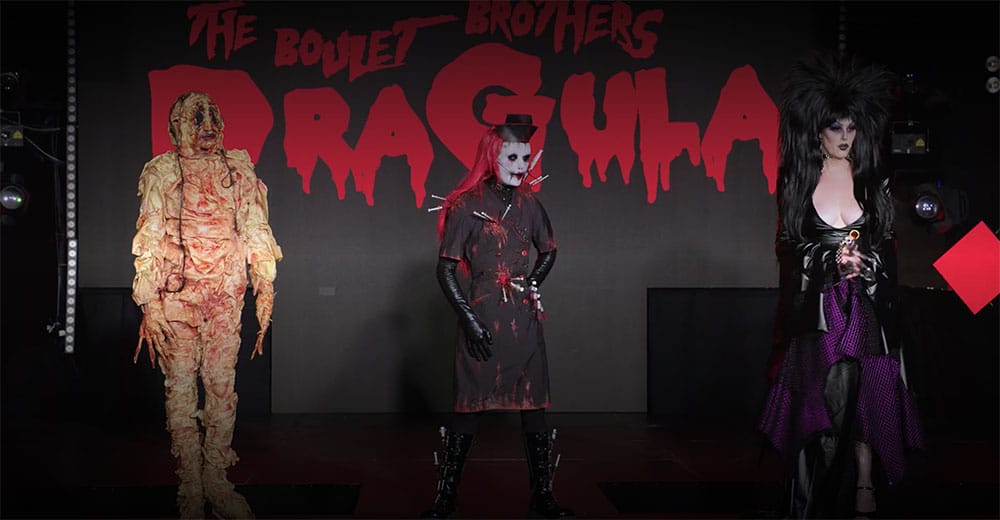 The contestants gather in the center of the coffin-filled workroom to discuss who is the biggest threat and who seems to be the weakest link, which — you guessed it — turns catty pretty quickly; mostly on behalf of La Zavaleta.

The gang mostly recognizes HoSo as the big threat (who I am obsessed with; if you haven’t scrolled through her Instagram, please do), and Formelda as the weakest link.

Formelda hasn’t performed on stage before, utilizing Twitch and Instagram, and is a mask queen — a particular art form that hasn’t done well on the show so far (not without trying; I’ll always love you, Yovska!).

The Boulets take the stage in beautiful black and red leather dresses, striking poses and working the floor, before seating themselves beside guest judges Tananarive Due, a film historian of Black horror who you should recognize from Shudder’s Horror Noire: A History of Black Horror, and Darren Stein, director of Jawbreaker and All About Evil. The twosome stays true to their visionary artistry, having the girls’ performances slowed and chopped to show their best work.

Our emulated horror icons are:

What I think sets the Boulets apart from other hosts, and this show apart from other drag/art competitions, is how they make sure to let the competitors know that their drag is an art form, and any critique they make is not on their drag as a whole but only as it relates to the challenges on the show. With Jade, Merrie, and Saint being declared safe, the Boulets moved on to the top queens: Astrud, HoSo, Koco, and Sigourney — with Astrud’s Alien clinching the win. That left us with Bitter Betty, La Zavaleta, and Formelda Hyde as the bottom bunch.

Bitter Betty was critiqued for her Elvira being too close to the real deal, with not enough of her own inspiration shining through. Eventually, though, she was declared safe, leaving us with La Zavaleta and Formelda in the bottom.

La Zavaleta’s Pale Man was too different to clearly recognize, and she got dinged for a blood effect taking too long to work, leaving the judges staring at blood slowly pushing through a pump. Though this look confused me in relation to the material, I loved how sticky the look was. It reminded me more of Street Trash or the “Streaker” music video Eric Wareheim directed for TOBACCO.

I was personally heartbroken to see Formelda Hyde in the bottom.

When the cast was announced, she and HoSo were the two biggest eyecatchers for me, and I immediately crept through their Instagram feeds, marveling at their talent. Even though I loved the look, the judges felt the iconic cheek spirals on the mask were too small, making Formelda’s look not easily identifiable. The lack of experience on stage didn’t help her case either, on top of being read for her boots.

So our bottom two were taken to the graveyard where they were buried alive and covered in bugs and liquid. Once freed, the two were chased through the woods in a music video for “Time to Die” by The Boulet Brothers.

Unfortunately, Formelda Hyde got the chop instead of making the cut, and La Zavaleta was free to go back to the crypt for another week.