Continuing on the with the Women in Horror Month Massive Blood Drive, brought to us by the Twisted Twins (Jen and Sylvia Soska), we have the third submission to share with you all.

It’s a wonderful ode to the classic black and white thrillers, featuring a pint sized ‘Dr. Frankenstein’ (the director’s daughter and budding FX artist, Viva Noffke). Director Dayna Noffke and Writer Anthony Taylor bring us a fun reminder, that the blood is the life.

“I am grateful for the opportunity to be a part of this year’s Blood Drive campaign for several reasons. One of my favorite things about filmmaking is the collaborative nature of the art. I love meeting people, working with other amazing talents and bringing it all together to create something bigger than anyone of us. This project encouraged me to stretch my artistic imagination and to reach out to new people to help realize this vision, which is unlike any other project I have undertaken to this point in my career.” – Dayna Noffke 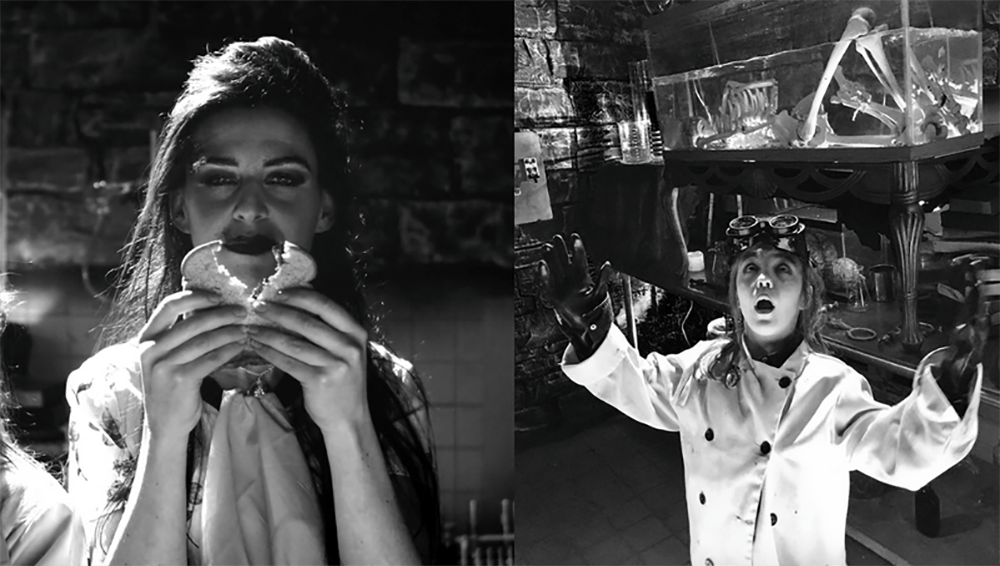 Dayna fell into filmmaking after a chance encounter brought her to the set of Rob Zombie’s Halloween 2. Soon thereafter, she wrote and directed her first short film, subsequently completing nine more shorts. Dayna’s work has been screened at numerous festivals, including Spooky Empire’s Film Festival, and her screenplays have been chosen as official selections and finalists at competitions such as Filmquest and Oaxaca Film Festival.

Speaking of her involvement in this life saving campaign, Dayna said, “Our entire team is thrilled to be supporting the cause of blood
donation. When you give blood, you are helping a real person — someone’s mother, someone’s sister or brother or baby. We are honored to help spread the word and remind everyone how important it is to donate blood!”

Dayna is currently in development for a feature inspired by a classic Victorian horror story. But until then, check out the third Blood Drive PSA from Noffke titled “Sanguino”.

LOOK FOR A NEW WIHM MASSIVE BLOOD DRIVE PSA EVERY DAY WITH THE LAST ONE APPEARING ON MARCH 1ST. FOR MORE ON WOMEN IN HORROR MONTH CHECK OUT THE OFFICIAL SITE AT: HTTP://WWW.WOMENINHORRORMONTH. COM/.