A Season of Sexism: The “Black Christmas” Backlash

The reimagining of “BLACK CHRISTMAS” has been attacked for its overtly feminist themes, but the backlash reflects a culture the film seeks to combat. 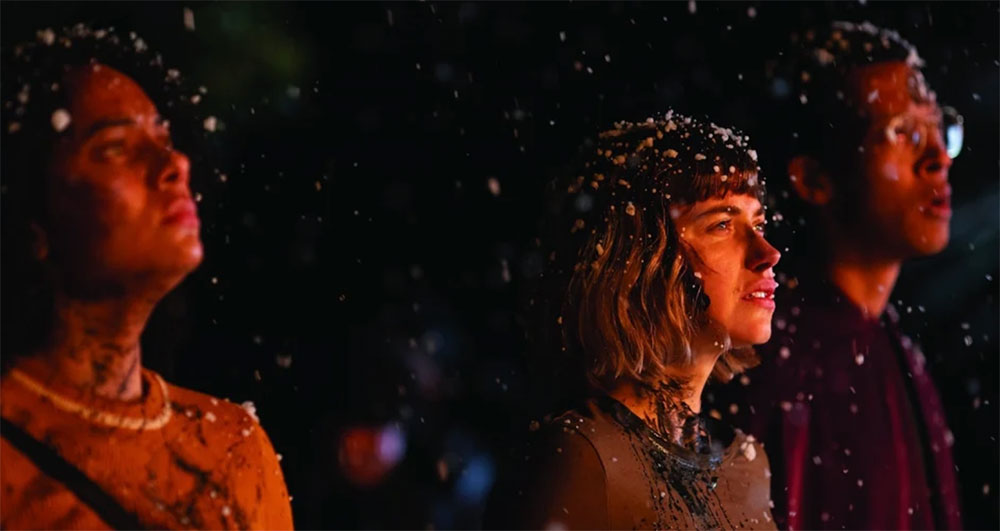 We need to talk about the dialogue surrounding Black Christmas, because, frankly, it’s gotten out of control.

Pick any Tweet or Facebook post talking about the movie, especially if they’re saying something good, and check out the comments and replies. They’re all teeming with negativity — actually, negativity is too nice a word. There’s an overabundance of vitriol and unmasked ugliness in the conversation about this film. And it goes beyond the usual anti-remake rhetoric that’s expected every time a new adaptation of an old favorite rolls around. 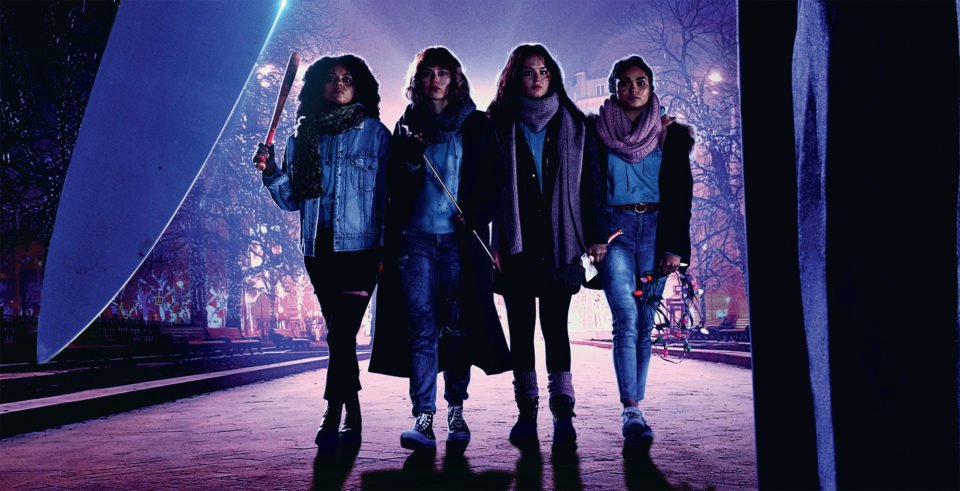 Black Christmas, directed by Sophia Takal, who co-wrote the film with April Wolfe, is the second reboot of Bob Clark’s iconic 1974 sorority slasher. From the onset, it was clear that Takal and Wolfe intended to make this reimagining their own instead of following the by-the-book slasher formula the original helped establish.

At the heart of the film is Riley (Imogen Poots), a sexual assault survivor who must not only confront her rapist but an entire fraternity of men determined to eradicate women who don’t fall in line. Riley and her sorority sisters fighting back against their attackers has been the film’s primary selling point, which ruffled some feathers from the very beginning.

By the time the film was released on December 13, a very vocal, very angry opposition had sprung up against the film and it’s in-your-face message of women’s empowerment. 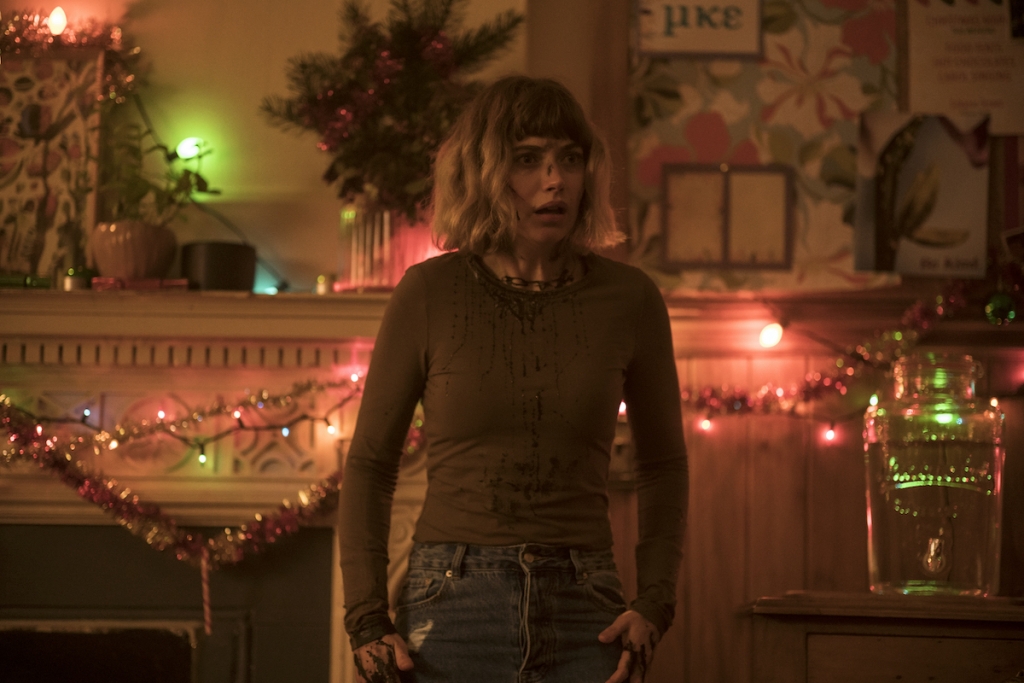 Black Christmas is being accused of “denigrating men,” “pushing an agenda,” and “pandering to SJWs.” The film is being dismissed as a disservice to the source material by foregoing good old fashioned hack-n-slash in favor of a blatant attempt to “cash in” on the #MeToo movement.

One man on Twitter went so far as to say that because of Black Christmas he now roots for all women in horror movies to get raped. Another on Facebook claimed the horror elements of the film were “ruined” by the women fighting back, saying the original was only scary because the women were frightened and vulnerable.

(If he had bothered to actually watch the film, he would know that the women are, in fact, very frightened and are “fighting back” in order to survive. You know, just like every Final Girl before them.)

Because the women of Black Christmas are the heroes while the men are the villains, the film apparently solidifies the belief that feminism is all about hating and subjugating men. 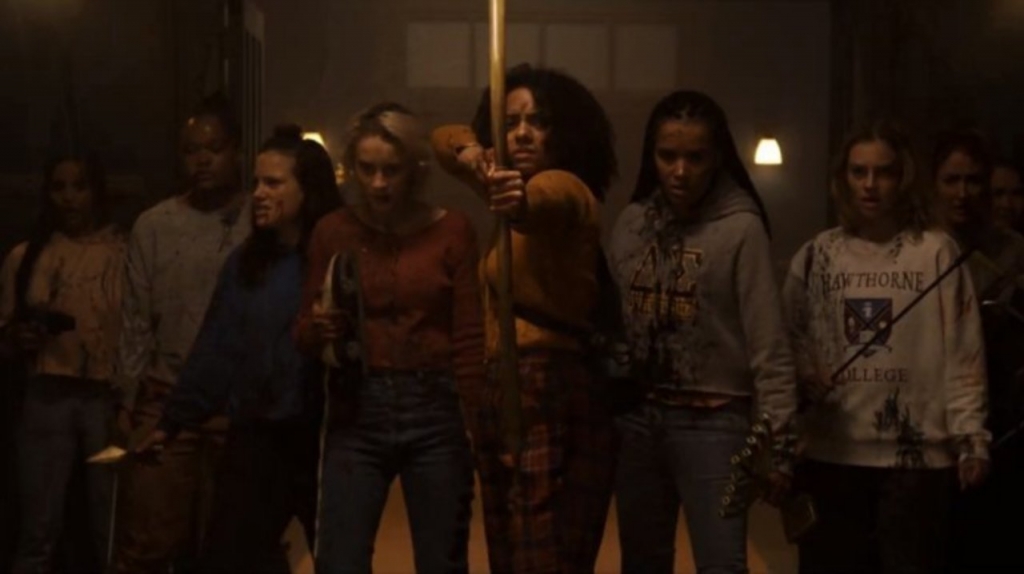 There isn’t room for a ton of nuance in a fast-paced ninety minute thriller, but Black Christmas at least tries to start important conversations even if it doesn’t have the space to properly finish them all (especially re: trauma and recovery). Among the topics it tackles is the way women can be complicit in their own marginalization, represented by the character of Helena, who sells her sorority sisters out to the murderous fraternity cult.

And they are careful to include at least one “good” guy, Landon, who is respectful of Riley’s boundaries and an all around decent dude. There’s also room to infer that many of the fraternity pledges may not have initially been bad dudes and that they may have been sucked into something they didn’t fully understand by the men in charge, who needed an obedient army to enforce their will.

The film isn’t saying that all men are evil. 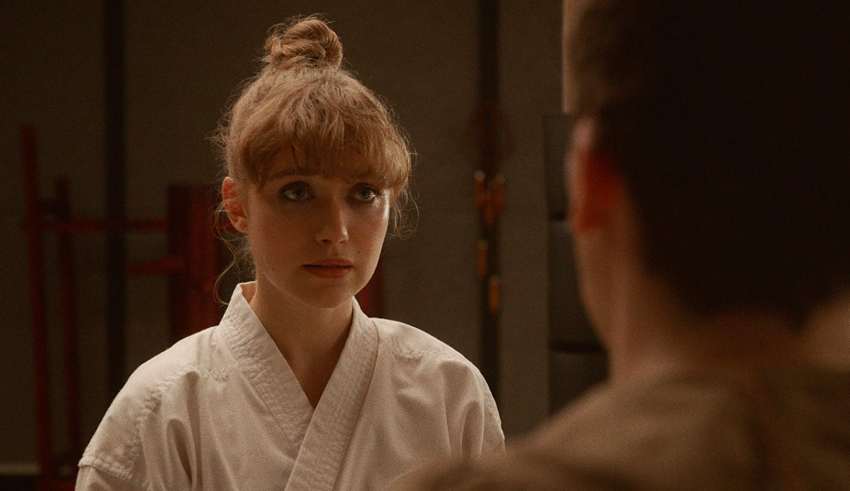 It’s saying that men have immense privilege in our society and that some men, usually the ones who have most privilege and power, use it for evil purposes. That evil takes many forms: rape, abuse, subjugation of women, denial of women’s basic human rights (access to reproductive care, etc), racism, classism. The list goes on.

The film is also saying that all men benefit from this privilege. To the guys saying, “we’re not all rapists, ladies!,” you benefit from the institutional sexism that keeps rapists out of prison and in positions of power. You benefit from the fact that women who report sexual assault are more often than not accused of lying, blackballed, and never get to see their attackers face justice. You benefit from a society that starts teaching girls how to not get raped from a frighteningly young age because “boys will be boys.”

And yes, like it or not, this privilege is especially powerful if you’re a white man.

One commenter Facebook said he felt uncomfortable watching Black Christmas and “spending an hour and a half being bashed for being a straight white male.” I have to wonder if the people complaining that this film claims all men as evil are the same ones who thought Get Out was saying that all white people are evil. The sentiments expressed are very similar, with claims that “if the shoe were on the other foot,” there would be mass outrage.

Here’s the thing: the shoe has been on the other foot. 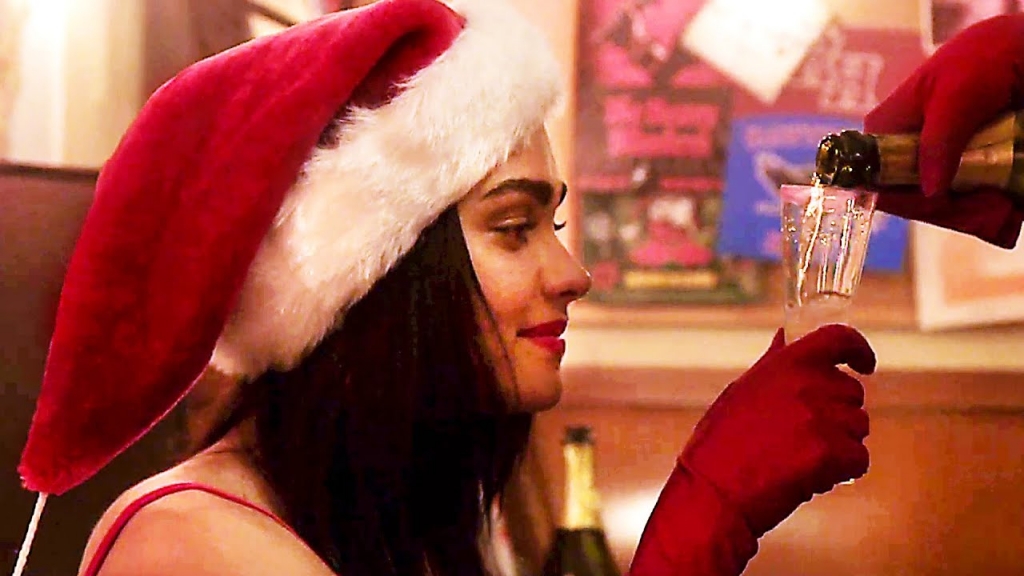 One of the most common themes in horror media is the threat of the “other,” someone who exists outside of society’s accepted norms, threatens to disrupt the so-called natural order, and must be destroyed. These “others” have taken many forms: women (namely those who don’t know “their place”), people of color, queer and trans people, foreigners. They may not always be explicitly depicted as such, but through coded language and subtext these characters reflect real world fears of and prejudices against marginalized groups.

The hero is usually a heterosexual white man who must eliminate the threat of the “other” and ensure that the status quo remains in tact. This goes all the way back to Gothic literature and early horror films like Dracula and Frankenstein. Obviously, not all horror fits this description, especially as recent years have seen many filmmakers questioning and subverting the status quo, but it is a very historically prominent formula.

The point is: white men are not and have never been oppressed. And a film that points out the evils that have come from centuries of white men wielding power over everyone else isn’t going to change that fact.

Black Christmas seeks to empower women to stand up for themselves and each other against assault and injustice; it’s not a call to arms in a war against men. So why do so many men feel threatened by the film’s pro-women message?

The biggest argument is that the message is too blatant, that it’s “beating us over the head” with its feminist politics. 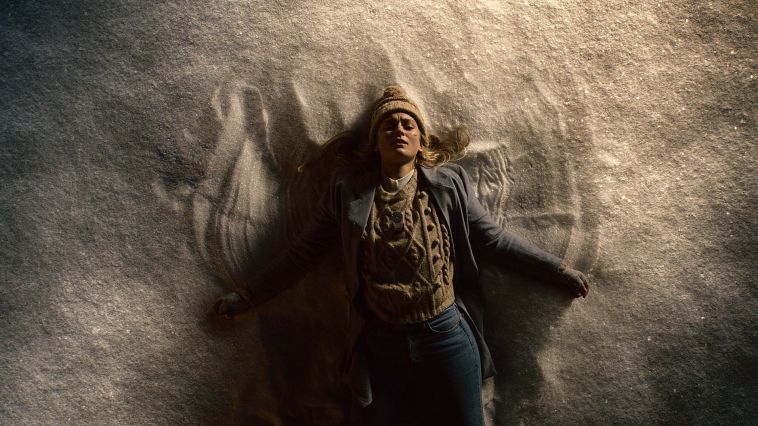 To be fair, Black Christmas’ feminism is very on the nose, a little too much at times. (The first onscreen victim is killed in the snow, her arms sprawling out to make a snow angel. As her body is dragged away, the shape becomes a giant phallus. I snorted loudly in the theater.) So saying that the film is ham-fisted is a valid criticism, and it’s understandable if that makes it hard for some viewers to enjoy it.

But the call to “keep politics out of horror” is absolutely ridiculous. Horror has always been political. The purpose of storytelling has always been to reflect the world around us and it is therefore inherently “political,” in the sense of the word being used here.

The problem only seems to occur when a story’s politics fail to uphold the status quo, when they don’t cater to people who are used to being catered to. When a story focuses on the issues facing a specific group of people — women, black people, trans people — in a way that is unpleasant for people who benefit from the disenfranchisement of these individuals — men, white people, cis people — the response is to “keep politics out of it.”

But what would some of our favorite horror films be without the politics that informed them? 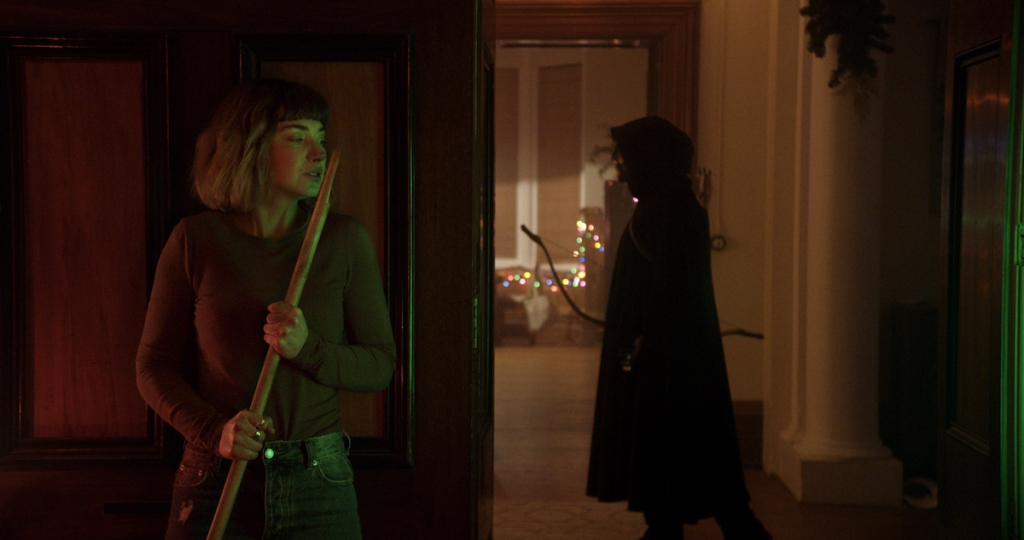 Texas Chainsaw Massacre, Night of the Living Dead, Candyman, just to name a few. But these films share a common denominator that Black Christmas does not: they were all directed by white men.

Before anyone says that the backlash against Black Christmas has nothing to with it being written and directed by women, think very carefully about that statement and look at the misogynist language in the hundreds of comments all over social media.

The truth is that women filmmakers are held to a higher standard than their male colleagues. They aren’t allowed the same capacity for failure; a woman’s work must be perfect or it will be burned to the ground while the world dances around the flames.

Charlie’s Angels, anyone? The film’s less than stellar performance has left the future of Elizabeth Banks’ career in question. On the other hand, Noah Hawley’s dismal directorial debut got him hired to helm the next Star Trek film, a multi-million dollar project from one of the most popular franchises of all time.

Takal and Wolfe have been tirelessly defending their film, from their lack of subtlety to their choice to aim for a PG-13 rating to attract younger audiences.

In return, they’re being called “cunts” on Twitter. People — predominantly, though not exclusively, men — are going out of their way to tear down their work and anyone who speaks up in its favor. Any critic, especially if they are a woman, who gives the film a positive review is told that they’ve lost all credibility.

The men making these statements are quick to point out that they are not actually anti-feminist.

There are dozens of comments from guys who justify their hostility by saying that their wife/girlfriend/friend who is a woman also hated the movie or that women film critics X,Y, and Z have given it scathing reviews — so see, they can’t be sexist. And because all women of course share one brain, all women must share these sentiments or else they are wrong, lying, or brainwashed “feminazis.”

The toxic cycle of unfiltered negativity is exhausting. 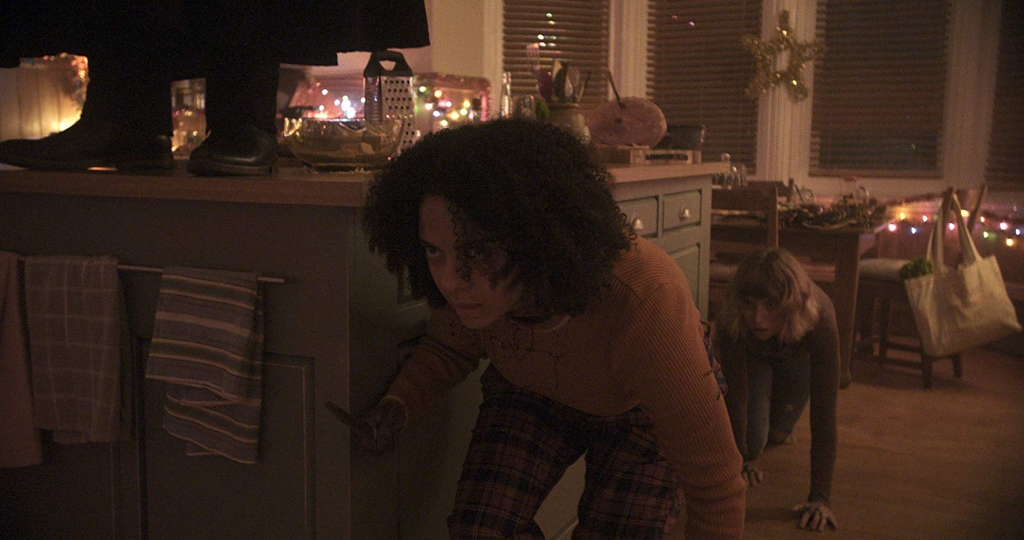 But it proves why narratives like Black Christmas are still very needed.

Women live with the threat of sexual assault every day, and if fighting back against that is perceived as a bad thing, then we still have a very long way to go. Black Christmas may be an imperfect film, but it succeeds in its goal to open important dialogues and make bold statements, even if it has to beat us over the head with them.

And in a world where some people truly believe there was no political message in Bob Clark’s original Black Christmas (there was) or that it was relegated entirely to the realm of subtext (it wasn’t), maybe beating us over the head is exactly what we need.