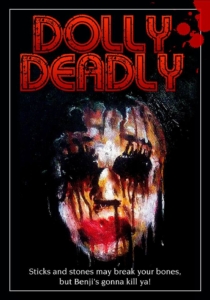 I was surprised and thoroughly entertained with Director Heidi Moore‘s refreshingly unique film, DOLLY DEADLY, which offers a humorous and horrific take on bullying, lack of parental love and affection and, last but not least, revenge. Moore’s vision for her feature film is a bit demented and twisted to say the least, so I figured it would be right up my alley. I was eager to partake in this experience after reading several early reviews, both positive and negative. But what I sadly noted was that most reviews really overlooked the immense artistic talents it took to pull this film off convincingly.

With a current 8 out of 10 star rating on IMDB, this comedy/horror/drama clocks in at a mere 82 minutes. DOLLY DEADLY marks an impressive collaboration between two talented female filmmakers, Heidi Moore (Wretched Productions) and Cassandra Sechler (Dreams for Dead Cats Productions). The ladies collaborated to pen this original idea of Moore’s, which is a remarkable testament to some of the dark and deranged cinema coming our way from women in horror. 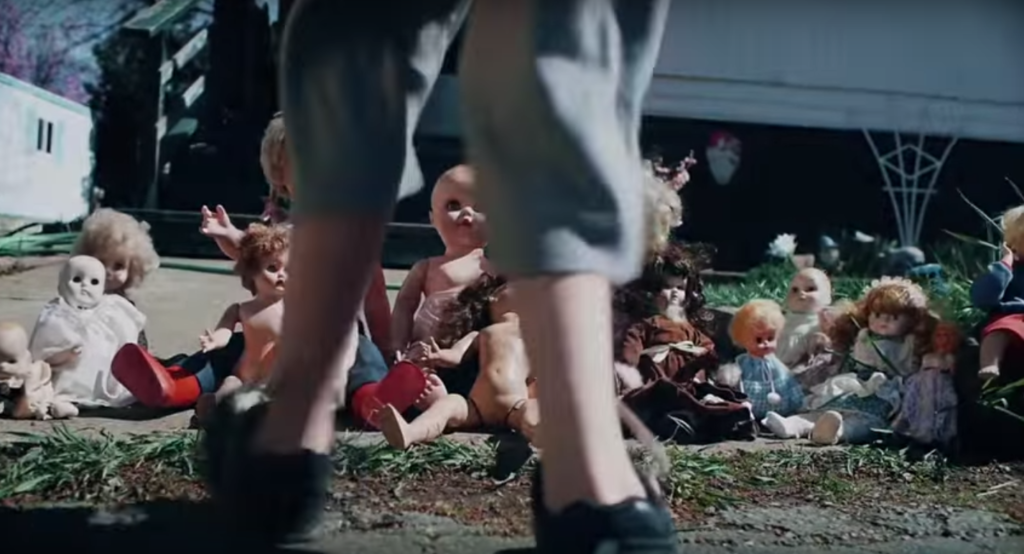 The film opens impressively, with an artful title sequence followed immediately by a gratuitous tit shot. Take that fellas! Also notable quite early on in the flick is the skillful cinematography and color saturation used to make this twisted tale pop off the screen.

We meet a very young toddler, named Benji, who shares a cramped, dirty, unsafe trailer home with his careless and drunk Mother. The small space is adorned with a massive number of different children’s dolls, which almost seem to be the caretaker of poor little Benji. His mother comments that she needs no one except him and her dollies. Benji appears happy enough, but the little man’s existence is about to soon dramatically change. Happening right before his eyes, while left in the company of a horde of doll babies, a gnarly and freaky hair dye atrocity claims his mother’s life. 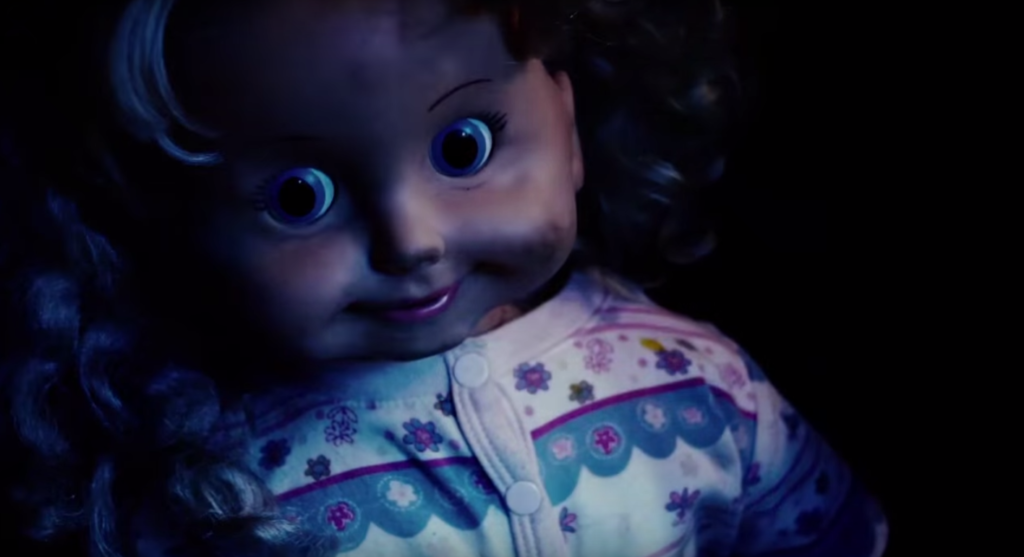 We now then introduced to Benji, eight years later (Justin Moore). He still lives in that wretched trailer park, now with his complete bitch of a Grandmother who refuses to be referred to as such. Mitzy is what she prefers, and this woman is a sight to behold. Portrayed exquisitely by Kimberly West-Carroll, Mitzy is the epitome of that high maintenance, low brow, cheap alcohol swilling matriarch of the Park de Trailers. A person of such high caliber, Mitzy wouldn’t be complete without her unemployed, lazy, mean and drunk love interest. In this case, his name is Donald (Jay Sosnicki, who also plays the trailer park stereotype to a T).

Mitzy and Donald, coupled with the neighborhood kids, have created a most unwelcoming state of affairs for poor Benji. He is mercilessly tormented physically and emotionally by his peers and at home. To cope he desperately clings on to his doll collection he holds so near and dear, reminding him of his beloved mother. In addition to his collection of dolls, which give him some respite from his cruel existence, Benji has very elaborate, very colorful and surreal daydreams he escapes to. 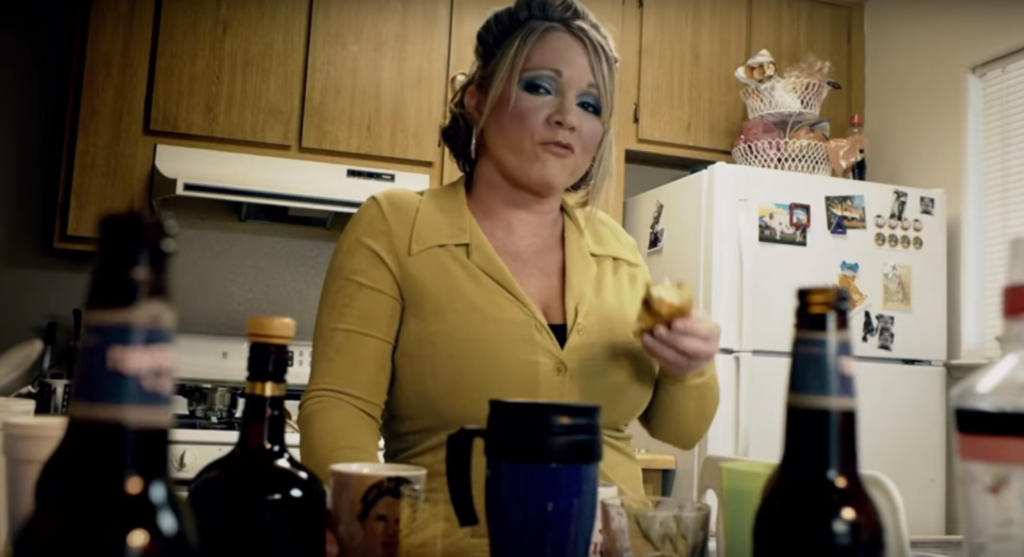 DOLLY DEADLY is likely to hit pretty close to home for many viewers and may really resonate with those who endured serious hardships during their adolescent years. But I won’t lie…this is definitely a love it or leave it film.

Benji seeks out a companion, any living thing to connect with. Rock Bottom happens to have a pitiful mutt in his possession which Benji bravely seeks out, asking the heavily under the influence owner if he could part with the pup. Like any good upper abuser, Rock Bottom delivers lines and philosophies that will stand the test of time and won’t soon be forgotten, I promise!

“Why does the dog smell so bad?” Benji innocently asks Rock Bottom. “Why does he smell so bad? Well, it could be that I have crotch rot, syphilis, a pocket full of dirty diapers with squirming maggots…” Rock Bottom continues to list some astounding possible reasons. Luckily the kid scored the mutt. I’d feel horrible if he had to sit through that laundry list of nightmarish possibilities and not earn the furry friend. Needless to say, the torment of young Benji begins to dramatically increase, taking an immense emotional toll. His encounter with a deranged homeless man (Christopher Calvano), hellbent on the idea he was abducted by aliens, shares a bit of wisdom with our young protagonist as he’s eating dog food with Fritos: “Do unto others as they would do unto you!” This seems to resonate with Benji, as his imaginary interactions with his dolls have become more  frequent and aggressive, leading him to believe violence will be necessary to protect himself.

Young Justin Moore, the actor who portrays Benji, does a phenomenal job in DOLLY DEADLY. He really nails being all out awkward as hell, yet still garnering sympathy from the audience. I couldn’t help but watch with morbid fascination, wondering exactly when and how this pre-teen would take his murderous destiny into his own hands. My question was soon answered via the wonderful artistic imagery courtesy of Moore and Sechler. A particularly brutal encounter with the neighborhood bullies, where they dress him as a doll — including forcing him to wear make up — seems to be the catalyst for Benji to finally snap. Stuffing doll parts within chest cavities and ensnaring a rival in a booby trap prompts his dollies to cheer him on before he finally turns his focus on his nemesis, Mitzy. No trite or inconceivable happy ending in sight, the filmmakers really earned my thumbs up on this one. Yes, DOLLY DEADLY is outrageous, but it’s a fun and well-paced ride into a land not many have ventured before. It was creative and well written, almost heartfelt when concerned with the abuse Benji had to undergo, with some quick witty retorts to help bridge the gap between uncomfortableness and enjoyment of the film.

Support Women in Horror and take a gander at this one if you’re down to watch some weird shit. DOLLY DEADLY will be available for preorder later this month and will be screened in October at Spooky Empire Horror Convention in Orlando, Florida.